Per their custom this season, Jeff and Sheila Kruesel moved to seats closer to the daughter in goal for the third period. Sheila sat parallel to the goal in the sixth row, her hands folded for much of the final 17 minutes. Jeff, a goalie at Rochester John Marshall and St. Cloud State, was eight rows higher and remained standing.

They watched as the Bears staved off a final push from East Grand Forks and thrust their hands in the air at the conclusion of Blake’s 3-2 comeback victory.

Trailing 2-0 at the first intermission, an undermanned Blake team made adjustments to the lineup and rallied for a second consecutive Class 1A state title at the Xcel Energy Center in St. Paul.

“It’s a really good feeling,” said Anna Kruesel, who stopped 29 shots and outdueled East Grand Forks Senior Goalie of the Year finalist Madi Galstad. Kruesel traded hand signs with her father and facial expressions with her mother at times during the game.

Already without injured standout forwards Karlie Lund and Jordan Chancellor, Blake watched as No. 1 seed East Grand Forks (26-3-1) stormed to a 2-0 lead behind goals from sisters Haley and Alexa Mack.

To counter, Blake (23-7-1) coach Shawn Reid moved defenseman Sylvie Wallin from defense to forward to spark the offense. Wallin’s first shift as a forward was highlighted by Carly Bullock’s 50th goal of the season at 8:38 of the second period.

A great chance for Haley Mack later in the period was thwarted by a better save from Kruesel. Instead of waiting on Mack to come toward the net, Kruesel moved out to challenge her and made the stop.

Wallin added two goals in the third period to give Blake its first lead. Having blown a two-goal advantage against Red Wing in the semifinals, the Bears applied their experience to prevent an East Grand Forks comeback.

“We knew we had to be relentless,” Wallin said. “We couldn’t stop pressuring because we knew we didn’t want to go to overtime again.”

Saturday’s state title is Blake’s fifth, most of any school. Asked about whether his team would consider opting up to Class 2A, Reid said, “I don’t know. That’s not my decision. It’s a decision for the administration. Wherever we’re placed, we’re going to play as hard as we can at all times.” 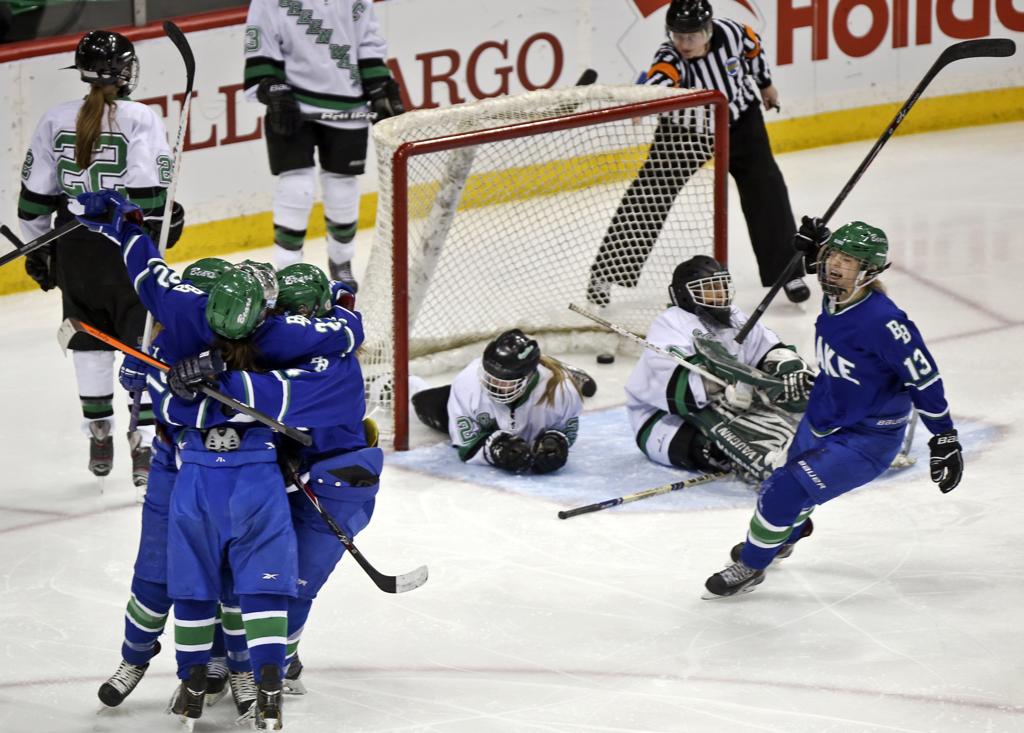