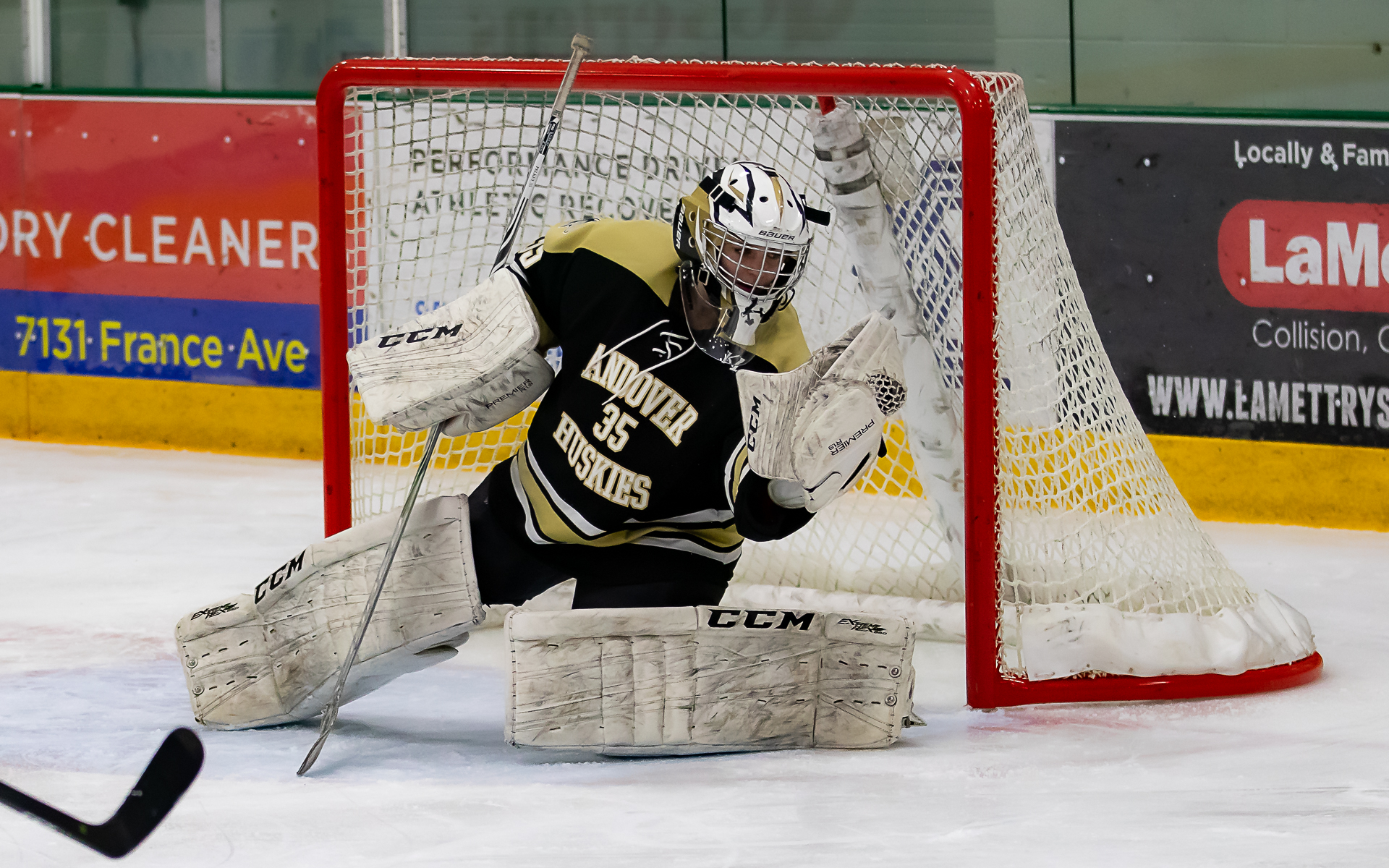 Andover senior Amanda Pelkey stopped all 25 Edina shots as the Huskies shut out the Hornets 1-0 on Thursday night at Braemar Arena. Photo by Gary Mukai, SportsEngine

It may have been the season opener for both Andover and Edina, but that didn’t mean Thursday night’s matchup lacked intensity.

“I’m mentally exhausted, and I didn’t play so I can’t imagine how they feel,” said Andover coach Melissa Volk.

Volk’s Huskies edged the Hornets, who won last year’s Class 2A state championship, 1-0 in a contest at Braemar Arena in Edina that featured plenty of physical play.

“I’m just depleted at this point,” said Andover junior forward Peyton Hemp. “I feel like that game took so much out of me and everyone on my team.”

That’s not an expected comment just one game into the season, but the Huskies (1-0, 0-0) had to face some self-inflicted adversity to get the win. They were on the penalty kill six times — three times in the second period — which took its toll heading into the third period. 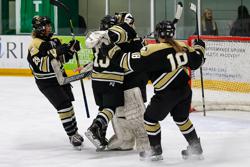 Andover notched its lone goal late in the first period, when the Huskies won a faceoff in Edina’s zone and junior forward Gabby Krause, a Minnesota-Duluth commit, scored from close range with an assist from Hemp.

The Hornets (0-1, 0-0) dominated throughout the final period, outshooting the Huskies 12 to five and possessing the puck for the majority of the period. Andover’s defense and senior goalie Amanda Pelkey, however, never let up.

“I was definitely proud of them for battling through some adversity, with a lot of penalty kills in the second period and definitely playing in our end most of the third period,” Volk said. “For us to battle through and get the win is pretty telling for those girls.”

Adversity perhaps struck hardest when Hemp committed a tripping penalty with 16 second left in the game, giving Edina a six-on-four opportunity to try and tie it.

“I was like, ‘Oh shoot.’ I feel like that was not very smart on my part,” Hemp said.

Andover senior forward Jamie Nelson, who was a standout on the penalty kill all game, won the faceoff in her own zone, allowing the Huskies to clear the puck and deny the Hornets a chance to attack.

“My team pulled through so I was really grateful for them,” said Hemp, who is committed to the University of Minnesota.

The physicality of this game stood out and the Huskies thrived, looking like they were in midseason form. Hemp said that’s because of how intensely her team practices.

“We play Andover hockey in every practice, working hard and playing as if it’s a game against each other — roughing up each other. I think that’s how we were able to play so well tonight,” she said.

There’s a long way to go this season for both teams, but it certainly is a statement win for the Huskies and something they can build on.

“Honestly, I feel like it just sets the tone for the rest of the season. Being our first game and playing the No. 1 team — the past three (Class 2A) state champions — I feel like it gives or team the confidence to go on and keep winning games,” Hemp said. 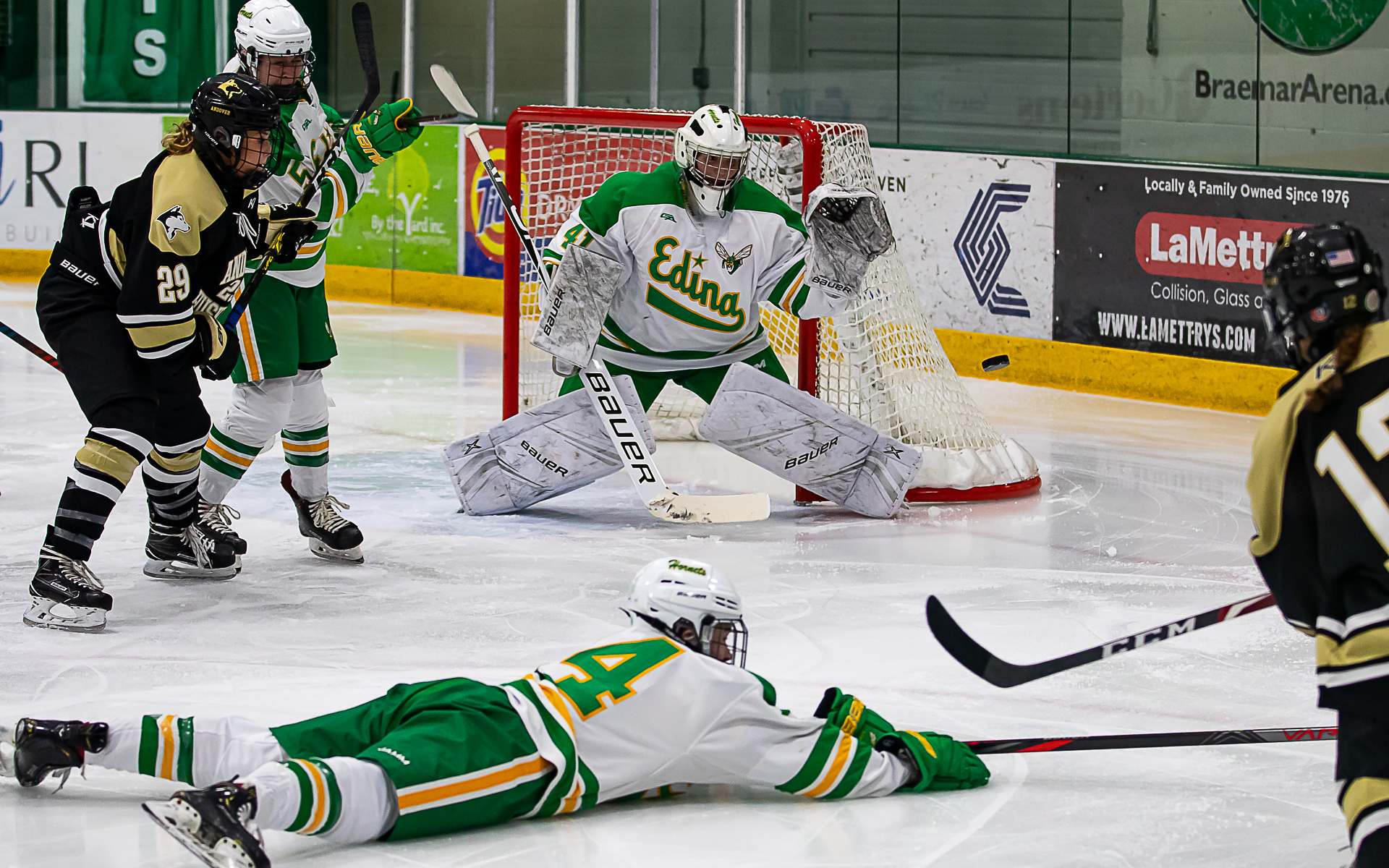 Tough defense by both Andover and Edina created early season excitement as the Huskies earned a 1-0 victory over the Hornets at Braemar Thursday night. Photo by Gary Mukai SportsEngine

Andover traveled to Braemar Arena in Edina on Thursday night and defeated defending Class 2A state champion Edina 1-0 to open the season.

Andover (1-0, 0-0) tallied the game’s only goal late in the first period, when the Huskies won a faceoff in Edina’s zone and junior forward Gabby Krause, a Minnesota-Duluth commit, scored from close range with an assist from junior forward Peyton Hemp.

The Huskies outshot the Hornets (0-1, 0-0) 21-13 through the first two periods, but were denied a few chances to extend their lead throughout the game by Edina freshman goalie Uma Corniea, who finished with 25 saves.

Momentum shifted in the third period, as Edina came out with more energy and possessed the puck for the majority of the period. The Hornets had 12 shots on net in the period, but Andover senior goalie Amanda Pelkey stopped them all. Edina’s best chance came when Pelkey fell to the ice after a save, making it look like Katie Davis, a senior forward, had an open net. Pelkey was able to slide over, however, and kicked away the shot to preserve her shutout.

The Hornets had a power play for the final 16 seconds of the game, but Andover senior forward Jamie Nelson won the ensuing faceoff in her own zone and the Huskies cleared the puck. 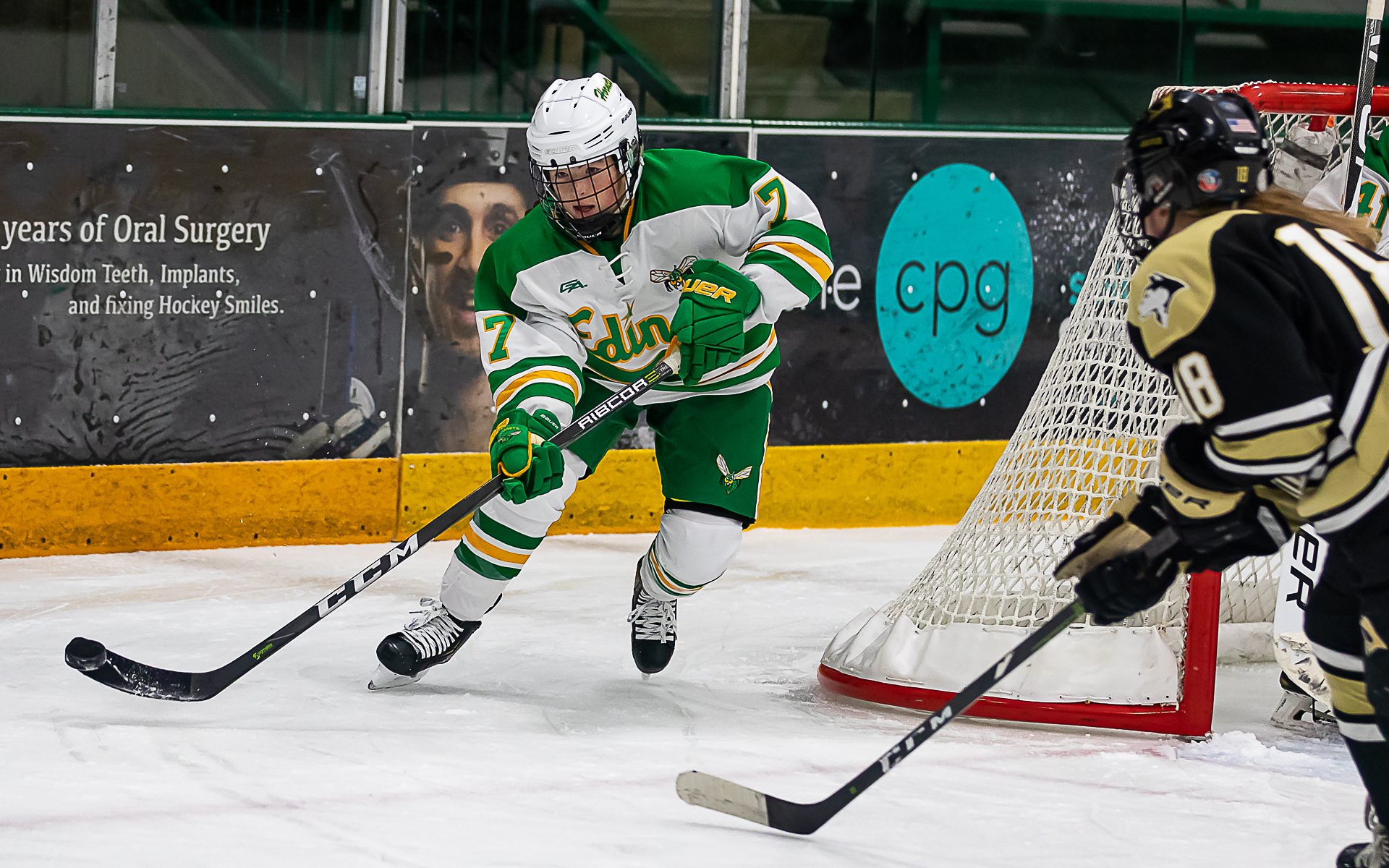