The earliest-starting of the high school winter sports seasons drops the puck Thursday night at 16 games, one of them a Class 2A matchup between Andover and three-time state champion Edina. 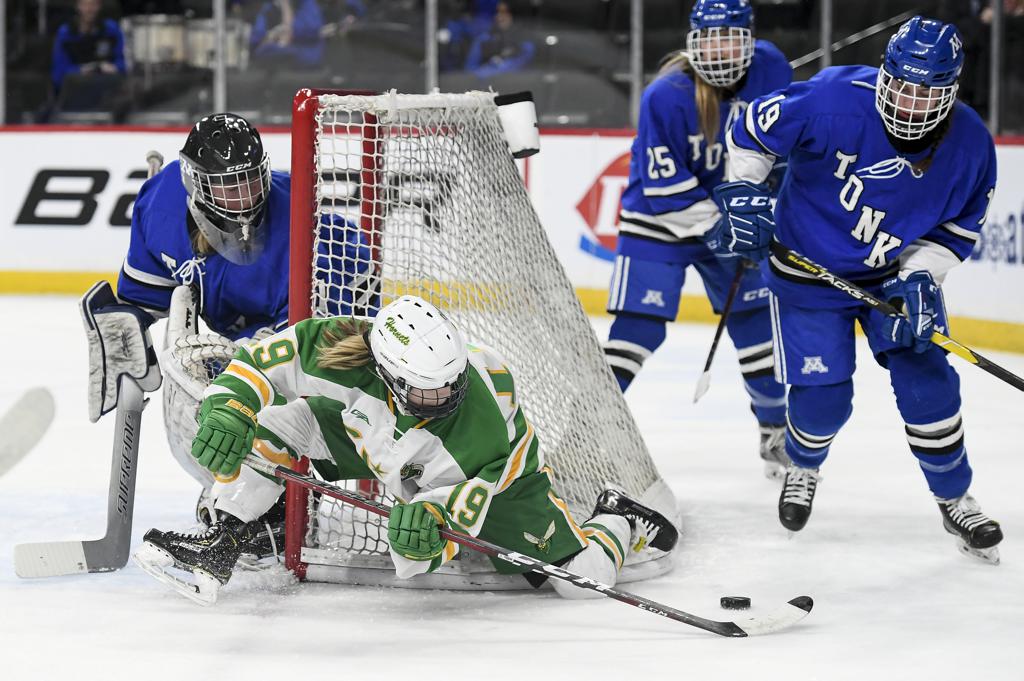 State tournaments this week in football and volleyball and the approaching swimming and diving championship meet means last call for fall sports. Conversely, Thursday marks the first games in girls’ hockey and announces the approaching winter slate of competition.

The 2019-20 season starts with 16 games Thursday, none better than a strong Andover team at Edina, winners of the past three Class 2A state titles. Will Edina win it all again? That’s one of the storylines to follow among the five presented here:

1. There’s some Edina flavor behind the bench at Wayzata. Taylor Williamson, a former standout for the Hornets and Gophers, joins her father, Dean, as co-head coach. Returning forwards Gretchen Branton and Sloane Matthews provide a potent combination. Other coaches on the move: Former Burnsville coach Tracy Cassano takes over at Minnetonka. The Skippers boast forward Lacey Martin and defender Maggie Nicholson. Tony Scheid, a two-time state championship coach at Stillwater who resigned in 2016 due to hostile parents, now coaches at nearby Woodbury.

2. Hockey Day Minnesota, the annual Fox Sports North celebration of the sport from high schools to the Wild, comes to Parade Stadium just west of downtown Minneapolis. Two girls’ games on Thursday, Jan. 16, are part of the festivities: Holy Angels and host Minneapolis faceoff at 6 p.m., followed at 8 p.m. by Grand Rapids/Greenway and Blake. The Bears, kept out of the state tournament by Edina the past two seasons, are anchored by a power trio of forwards in Addie Burton, Lily Delianedis and Audrey Wethington.

3. After Class 2A, Section 6, home to perennial powers Benilde-St. Margaret’s, Blake, Edina and Wayzata, Section 7 is the toughest. And it’s sure to boil down to Andover and Forest Lake. The Rangers, runner-up in overtime of the finals last season, start with goalie Allyn Goehner and defenders Rachel Golnitz and Ellen Nelson. And there’s still forwards Ashley Mills, Brieja Parent and Brooke Remington. Andover counters with forwards Peyton Hemp, Gabby Krause and Jamie Nelson, plus defender Madison Kaiser.

4. In Class 1A, Breck has beaten Warroad in the past two championship games. The Warriors next southern voyage to St. Paul depends on the dynamic forward duo of Hannah Corneliusen and Genevieve Hendrickson. Breck counters with forwards Sadie Lindsay and Olivia Mobley. But the Mustangs must replace goalie Uma Corniea, who transferred. And that brings us back to Edina.

5. It’s all about Edina. Again. In addition to adding Corniea, the Hornets now have junior forward Emma Conners, who played with Selects Academy/Bishop Kearney High School in New York. That’s on top of returning standouts such as Katie Davis, Hannah Chorske and sisters Tella and Vivian Jungels. No team has won four consecutive Class 2A state tites. Yet.