Lauren Stenslie, Tristana Tatur and Stella Retrum each scored twice for the Crimson. 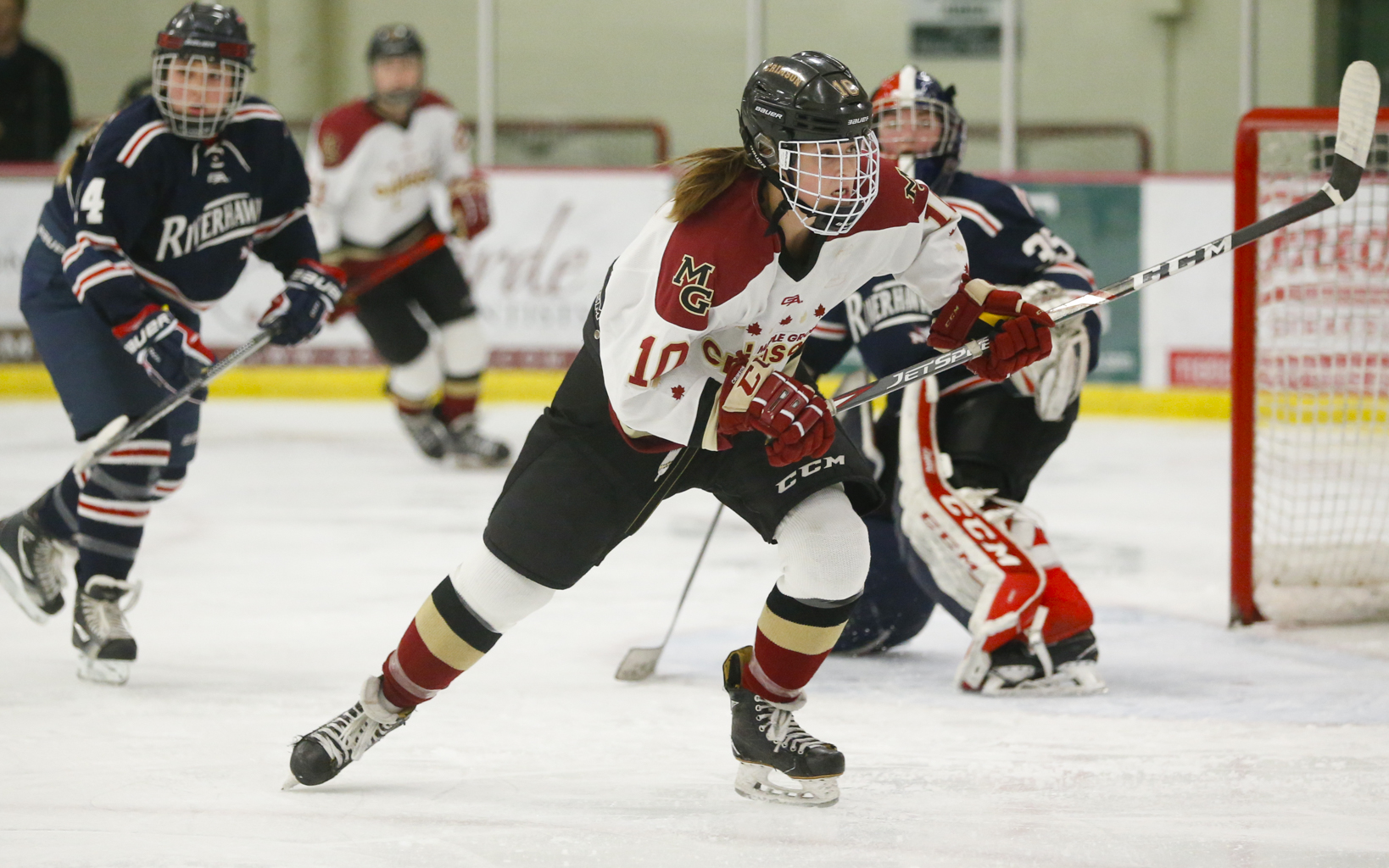 Maple Grove's Stella Retrum (10) chases down a loose puck against North Wright County Saturday. Retrum had two goals and an assist in the Crimson’s 6-1 victory over the River Hawks in Maple Grove. Photo by Jeff Lawler, SportsEngine

It seemed like if Maple Grove could get into open space, they’d make something out of it.

Pressure, space and speed helped the Crimson score four goals in the second period of a 6-1 nonconference win over North Wright County (1-1-0, 0-0-0) on Saturday at the Maple Grove Ice Arena.

Forwards Lauren Stenslie, Tristana Tatur and Stella Retrum each scored twice for the Crimson (2-0-1, 1-0-0) in a matchup of teams that finished last season in the coaches’ association’s top-10 rankings in Class 2A.

Something as simple as winning a fight to a loose puck helped the Crimson get plenty of one-on-one opportunities with River Hawks goaltender Anna LaRose, a Maine commit who posted a 1.67 goals-against average last year and had allowed just one goal in North Wright County’s first game this season.

“We pride ourselves on the speed that we can play with, and how hard we can go to pucks and keep pressure on them,” said Maple Grove co-head coach Amber Hegland.

For her first tally in the game’s opening period, Stenslie broke out of her own zone, got to the wing and then back to the slot to fire off a wrist shot.

Stenslie has been on a scoring run since the 2019 postseason, notching eight goals and six assists in the section playoffs and in the state tournament. So far this season she has seven points — three goals and four assists — tying her with Retrum to lead the team in points.

“She’s dynamic. Her speed and her relentlessness is something that leads her,” Hegland said of Stenslie. “She’s got a knack for the net and is a true natural scorer; has the ability to get the puck off her stick really quick, which is hard for goalies to read.”

Stenslie’s second goal came in the second period when the River Hawks had a shot go wide, then wrap up the boards to where she was able to take possession and skate in alone on LaRose to score.

The Crimson got plenty of chances in transition off blocked shots and they won battles for loose pucks.

“I think that’s really good that we turn that into going to the net instead of just winning it and not knowing what to do,” Stenslie said.

Retrum, who is a freshman, and Tatur, a junior, help comprise Maple Grove’s second line of forwards. Retrum leads the team with five goals, and she got her second tally of the day in the middle period, thanks to pursuit of a puck that got into no-man’s land as LaRose came way out of her goal to play it.

“Teams can’t just key on one or two players,” Hegland said. “If Lauren doesn’t score today, it’s somebody else. And there’s quite a few somebody elses with our lineup right now.”

With Maple Grove’s offense coming into its own, Crimson goaltender Brooke Cassibo has been able to settle into her role in her first season starting on varsity.

Coming off its appearance at state last season, Maple Grove returns a strong core. So far this season the Crimson have been able to turn hard-working defense into instant offense thanks to a combination of effort, speed and finishing.

“It makes me really excited for the upcoming season and how well we’re gonna be able to be doing, and how we’re working as a team,” Stenslie said. 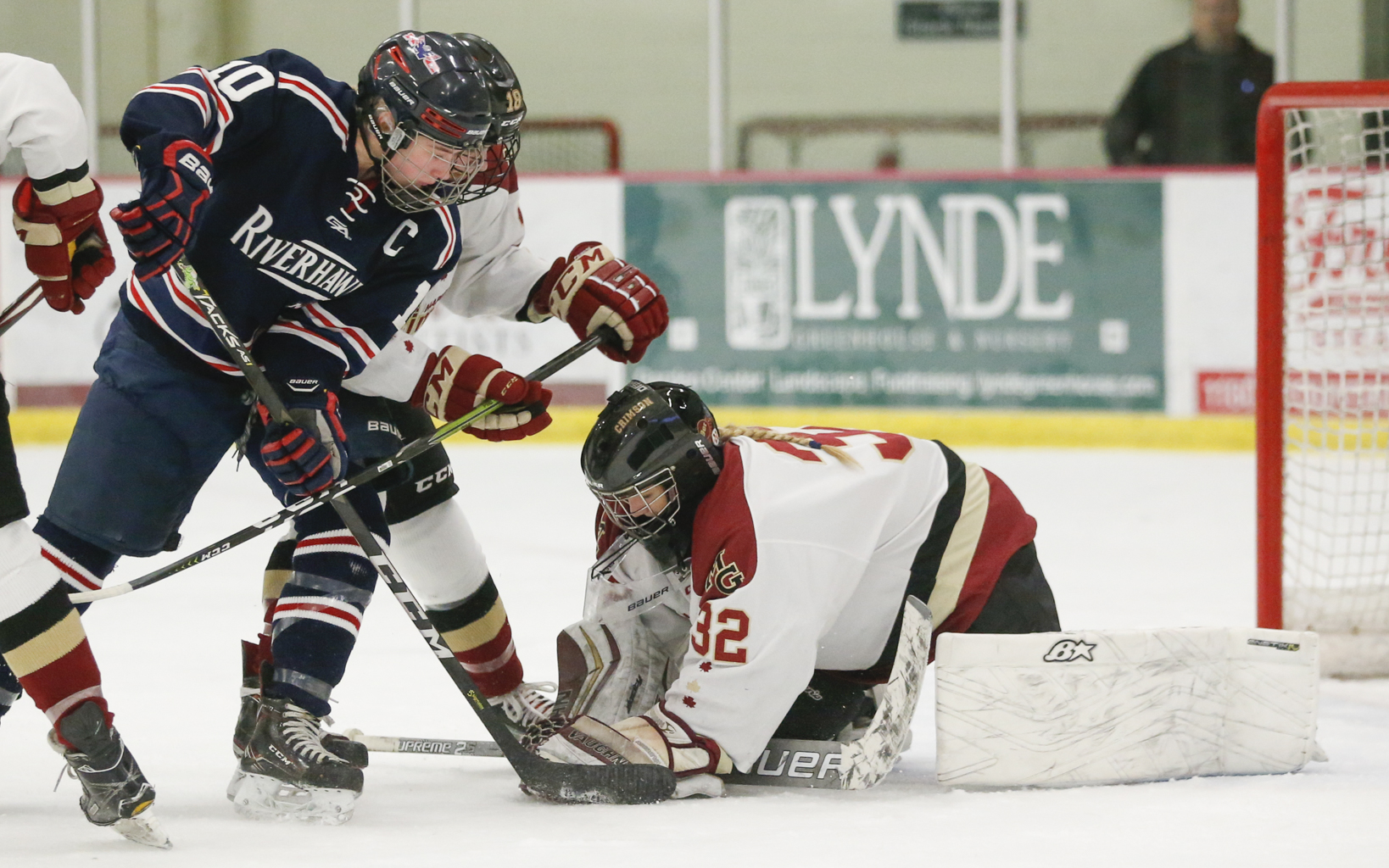 Maple Grove goalie Brooke Cassibo (32) covers the puck to stop play in the second period against North Wright County. Cassibo had 24 saves in the Crimson’s 6-1 victory over the River Hawks Saturday in Maple Grove. Photo by Jeff Lawler, SportsEngine

An offensive flurry in the second period on Saturday helped Maple Grove stay unbeaten, as the Crimson notched four goals in the middle period to secure a 6-1 nonconference win at home over North Wright County.

Lauren Stenslie, Tristana Tatur and Stella Retrum each scored for the Crimson (2-0-1, 1-0-0) in the second period, and each finished with a pair of goals in the game.

The four-goal outburst in the second period came after Maple Grove established a 1-0 lead in the first period when Stenslie scored at the 10:49 mark. The goal came after she pushed through the neutral zone and to the left wing in the River Hawks’ end, before skating to the slot and firing a wrist shot past goaltender Anna LaRose.

Mackenzie Bourgerie had the lone goal for North Wright County (1-1-0, 0-0-0) in the second period, which briefly cut the deficit to 3-1. 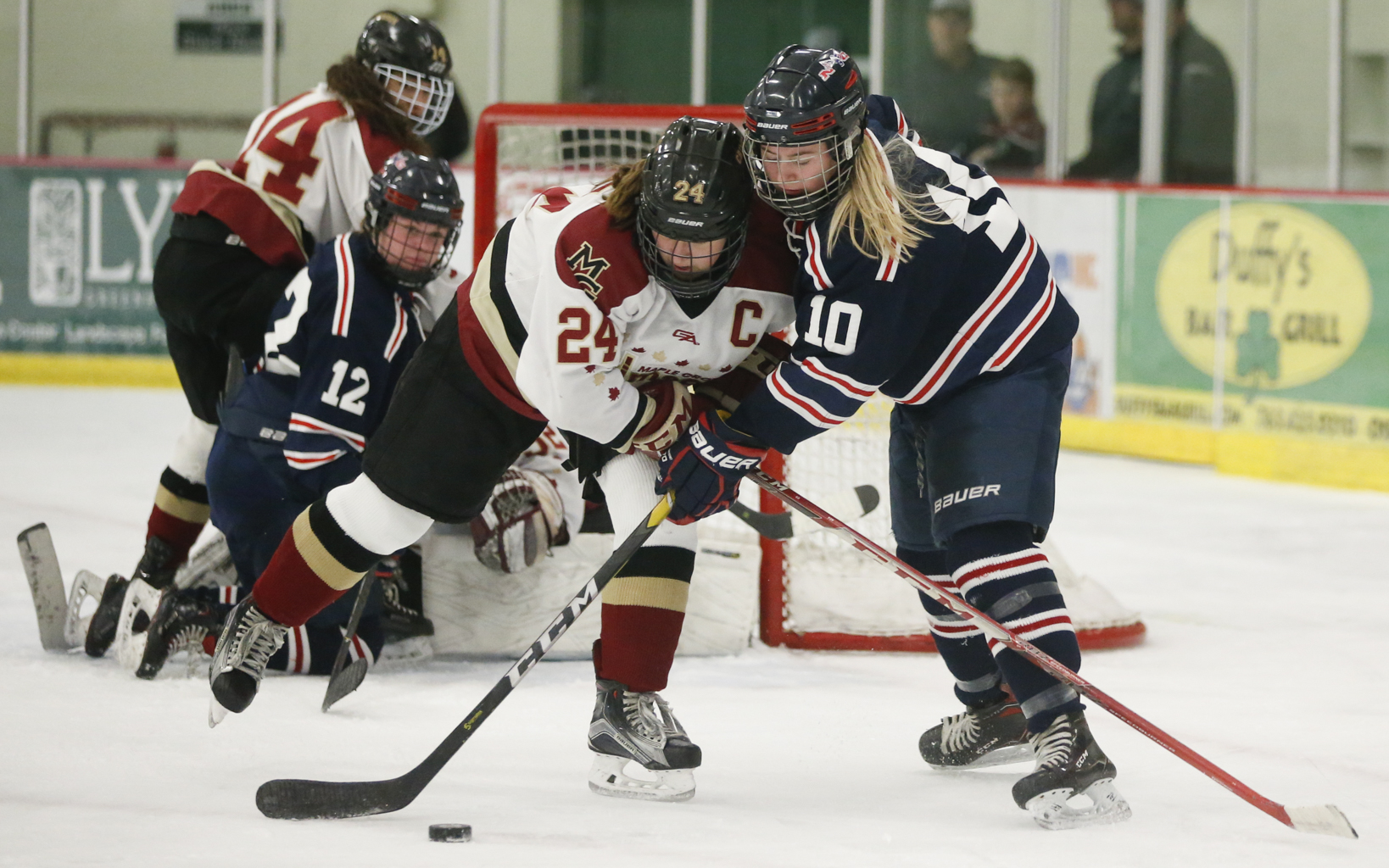 North Wright County's Mackenzie Bourgerie (10) and Maple Grove's Jenna Timm (24) battle for the puck during Saturday afternoon's game. Bourgerie had the River Hawks' lone goal in their 6-1 loss to the Crimson. Photo by Jeff Lawler, SportsEngine