Andover's championship quest gets gritty with Slimy, The Brick and speed

A state tournament-ending loss last year taught the Huskies that they need to score more “dirty goals,’’ an approach their talented top line has embraced. 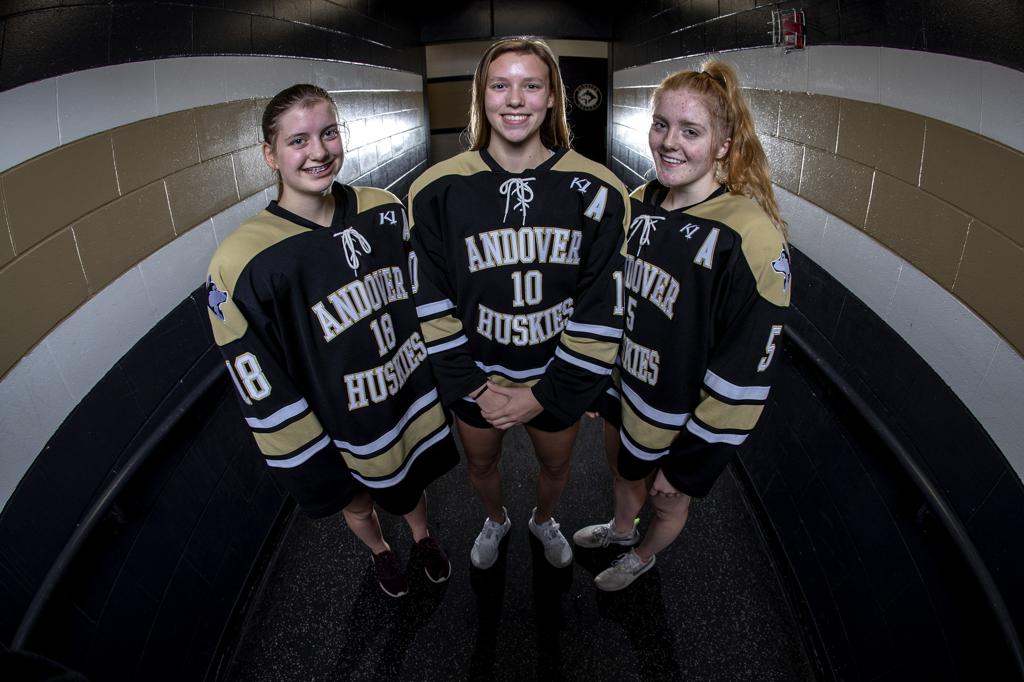 Gabby Krause (18) brings the speed, Jamie Nelson (10) is "Slimy', and Peyton Hemp (5) is "The Brick.'' Together they are Andover's top line as the Huskies seek new goal-scoring toughness this season. Photo: CARLOS GONZALEZ • cgonzalez@startribune.com

There goes Slimy, sprung by a diving pass from her linemate, The Brick, and driving hard to the opposition’s net.

The play represents the next challenge for Andover’s talented top line of Nelson, Peyton Hemp — dubbed “The Brick” for her strength — and Gabby Krause, known not for a moniker but for her speed. They combined for 170 points last season and impressed Volk with their chemistry.

“I have yet to see a line move the puck as well as they do,” Volk said.

Always skilled on the attack, the trio seeks a grittier brand of hockey. As a program, Andover seeks its first Class 2A state championship. Those pursuits are intertwined.

Watching her team’s overtime loss to Brainerd/Little Falls in the state tournament semifinals, a game in which Andover outshot the Warriors 40-23, taught Nelson “we can’t be perimeter players,’’ she said. “We have to crash the net. We can’t try to do just fancy plays. We have to get dirty.”

Nelson has seen the team’s different mind-set in action already this season. She said four of the goals scored against Benilde-St. Margaret’s were “dirty goals.” That’s hockey speak for goals produced by crashing the net, tipping shots and burying rebounds. The ugly goals that can make beautiful memories.

Urgency also exists. Nelson is a senior, in her final season before heading to play hockey at Minnesota State Mankato. She and her junior wings Hemp (Minnesota) and Krause (Minnesota Duluth) have been amped for this season since last February.

“Normally when a season is done, we’re ready for a break before getting back after it,” Volk said. “But after last year, they were ready to keep going. They wanted a redo. I think they took losing in the semifinals as a motivator.”

Volk started skating Nelson on a line with Hemp and Krause in summer workouts before the 2018-19 season. The trio immediately clicked. Hemp said the “telepathy” she enjoyed with Krause, a former youth hockey linemate, extended to Nelson.

“She’s one of the best players I’ve ever seen in terms of moving the puck,” Hemp said of Nelson. “She makes plays like it’s nobody’s business.”

As for the Slimy nickname, Nelson said Volk “started it my sophomore year. She said that I slime through players with the puck. It’s the weirdest way to describe it.”

As for “The Brick” nickname, “When she hits someone, they fall over,” Krause said.

Then there is Krause, a blur of a skater who tallied 27 goals and 22 assists.

All three players are assistant captains this season (senior defenseman Kennedy Little is team captain). Their line is known among teammates as the “Purple Derples” because of the color of their practice jerseys.

Andover started its season with a victory against three-time defending Class 2A champion Edina for the second consecutive season. Krause scored the game’s only goal on an assist from Hemp. The Huskies’ subdued reaction reflected their long-term goals.

“Last year we did act like it was the Stanley Cup,” Hemp said. “We went crazy. This year it was more of an expectation. We expect to win, and we want to work for that.”

Hemp hasn’t stopped working. “The Brick” is challenging herself to bring her intensity and penchant for contact to the scoring areas.

“You have to be fearless going into those situations,” Hemp said. “My dad used to say it’s the people who are scared who get hurt.”

“We have a really talented group,” Nelson said. “If everyone does their part, I can see some good things happen.”