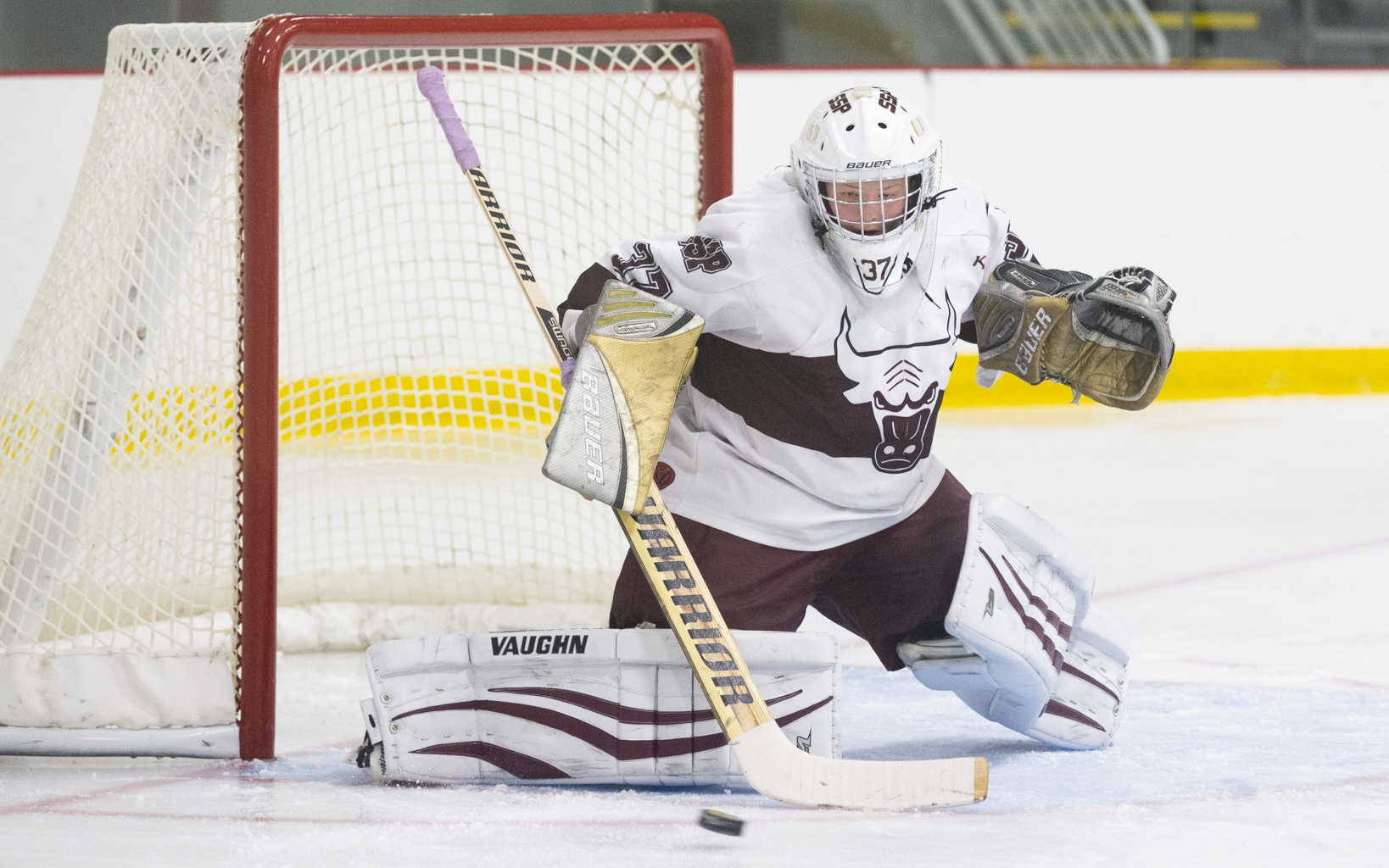 South St. Paul's Delaney Norman (37) turns aside a Duluth Marshall shot during the third period Saturday. Norman recorded her second shutout of the season in the Packers’ 1-0 victory over the Hilltoppers. Photo by Jeff Lawler, SportsEngine 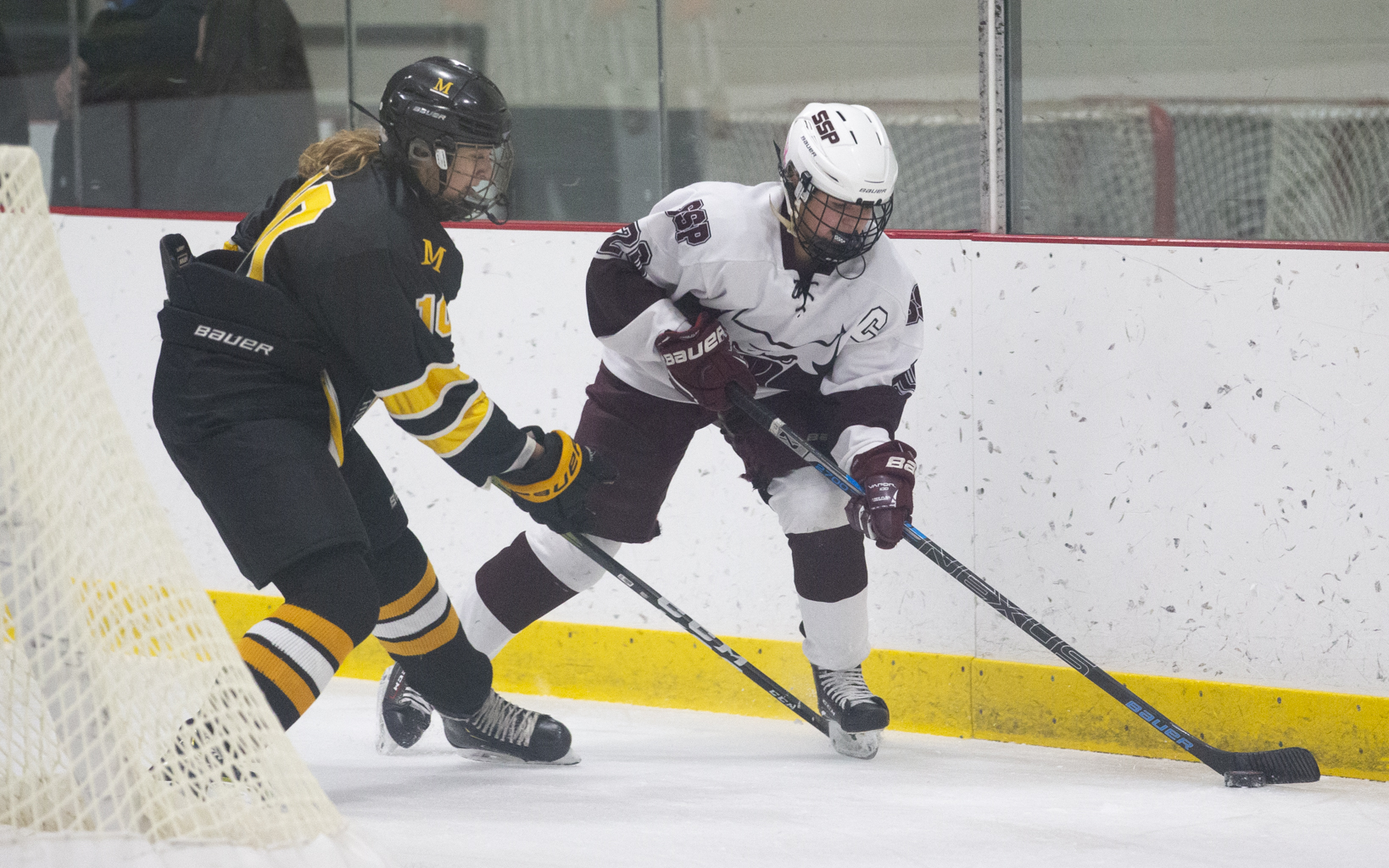 South St. Paul's Brynn Sexauer (20) battles Duluth Marshall's Isabella Kartch (10) during the first period Saturday night. Sexauer scored on a rebound in overtime to give the Packers a 1-0 victory over the Hilltoppers. Photo by Jeff Lawler, SportsEngine

"We talked all game about crashing the net," the senior forward said. "So I crashed the net, and when a shot by Lilie Ramirez popped out to me, I just buried it."

Sexauer's goal, which came at 1:54 of overtime, was the only goal in the Packers' victory over Duluth Marshall at Doug Woog Arena Saturday. And while it may not have been very artistic, South St. Paul coach Dave Palmquist thought the goal was a work of art.

"Going into the overtime, we said, 'Every shot is a good shot,'" he said. "We weren't looking for anything pretty. We got a shot on net, and Brynn Sexauer was our best forward tonight because of the way she crashed the net."

Sexauer's goal, and the fine play in net by freshman Delaney Norman, gave South St. Paul, ranked sixth in the Class 1A coaches' poll, the win that improved its season record to 3-1.

Norman stopped all 16 shots she faced to earn her second shutout of the year.

"I thought Duluth Marshall played a great game, and their goalie was terrific," Palmquist said of Duluth Marshall netminder Charlesa Prior, who finished with 27 saves. "But we had a game canceled this week. And while having a break this week was nice, I thought we were a little off our game. But we found a way to win when we weren't at our best."

Some of the credit for those struggles goes to the Duluth Marshall defense, a unit coach Stephanie Erickson said has struggled at times this season.

"I was pretty proud of the way we picked up the other team in front of our net," she said. "We had not been doing that very well, but today I thought we did a better job of that. We have a very young team, so it was exciting to see them come together and compete the way they did here."

But the No. 7-1A Hilltoppers fell to 2-3 because they lacked quality scoring chances.

"Today we needed to get more shots on the net — more quality shots," she said. "If we correct that, we'll be in good shape."

"I wanted to make sure we had a really tough schedule so we would be ready when we go to state this year," Erickson said.

Meanwhile the victory for South St. Paul, while not pretty, gives the program its second quality wins this season after beating No. 2-1A Proctor/ Hermantown 4-3 on Nov. 15.

"Every game is going to be a battle for us, and we knew this was going to be a tough game, too," Palmquist said. "But this was a good challenge for us going into the Hill-Murray game this Tuesday night." 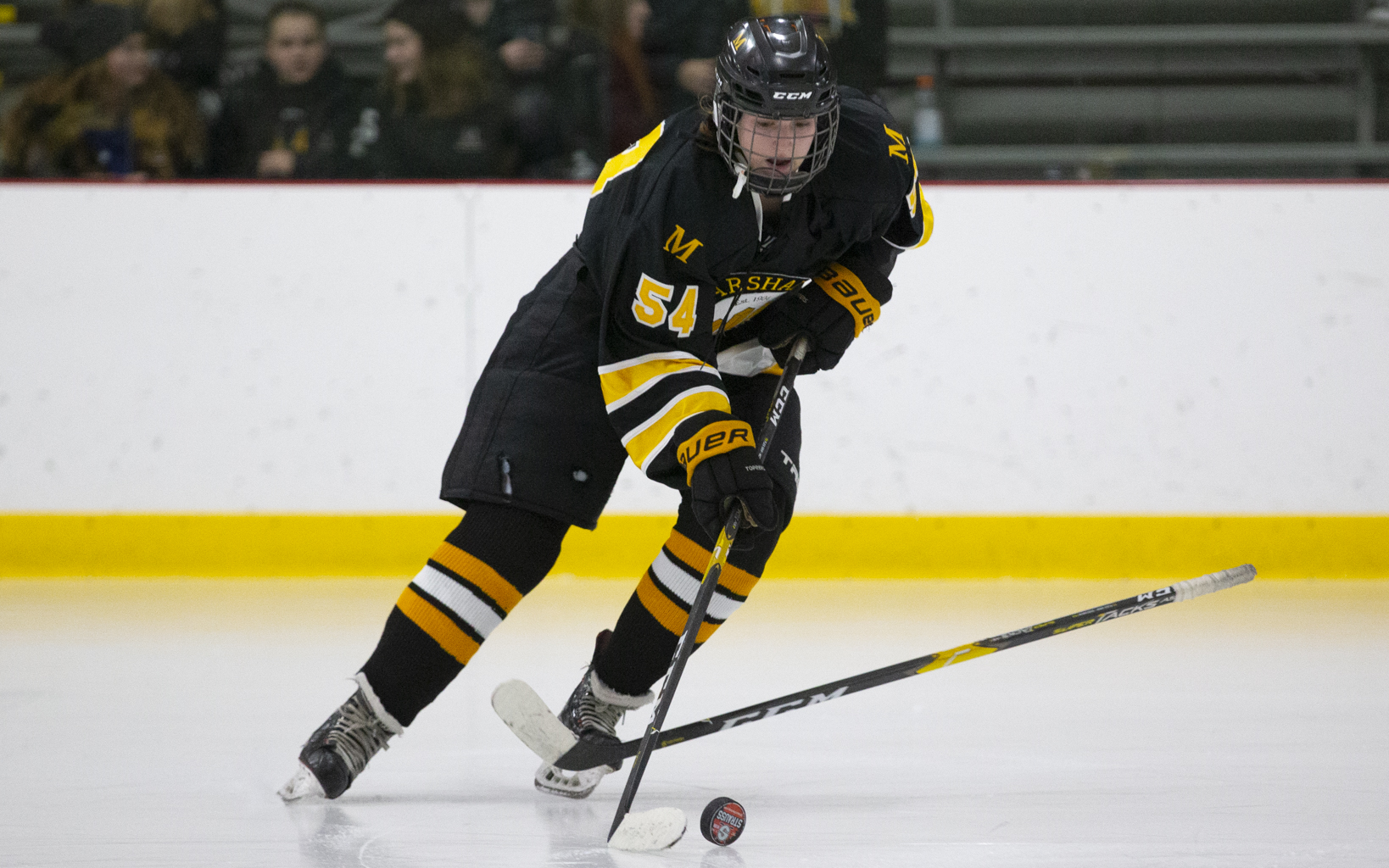 Duluth Marshall's Maren Friday (54) tries to avoid a loose stick as she cuts toward the middle of the ice against South St. Paul. The Hilltoppers fell to the Packers 1-0 in overtime in South St. Paul Saturday night. Photo by Jeff Lawler, SportsEngine

South St. Paul's Brynn Sexauer scored just 1:54 into overtime to give the Packers a 1-0 victory over Duluth Marshall at Doug Woog Arena Saturday.

Early in overtime South St. Paul sophomore Lilie Ramirez took a shot from the boards that was stopped by Hilltoppers' junior goaltender Charlesa Prior. But the rebound found the stick of Sexauer, and the senior scored her team-leading fifth goal of the season to give the Packers, ranked No. 6 in the Class 1A coaches' poll, the victory.

Prior was solid in net and finished with 27 saves for the Hilltoppers. South St. Paul goaltender Delaney Norman, a freshman, stopped all 16 shots she faced to record her second shutout this season.