In addition to their high-octane offense, the Hornets featured a stout defense backstopped by Uma Corniea. 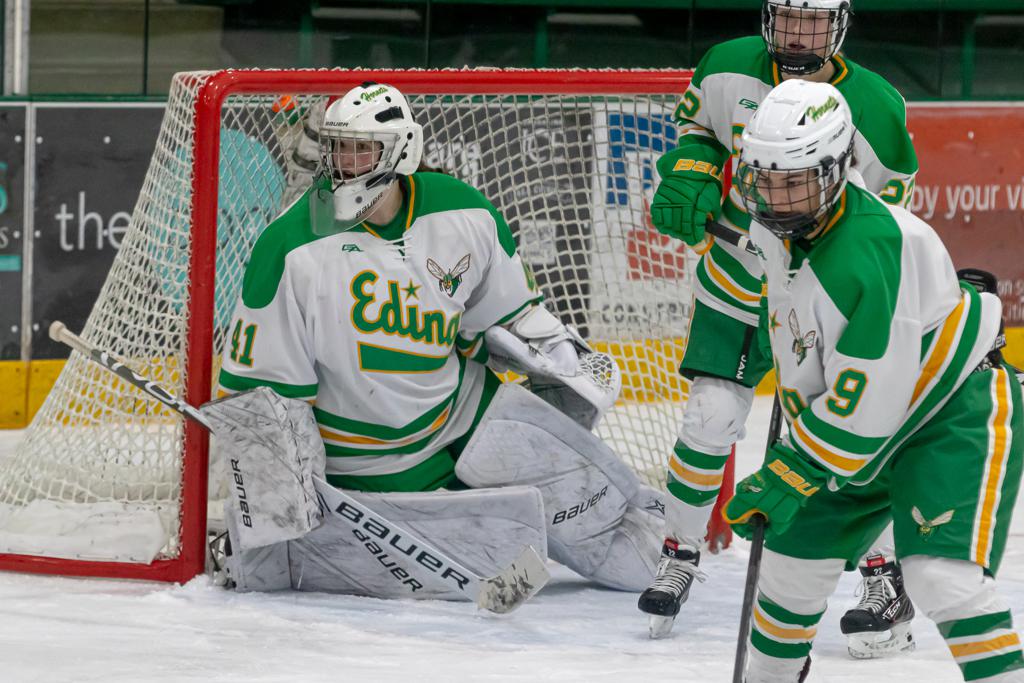 Freshman goalie Uma Corniea (41) and Edina's tough defensive unit held Breck to one goal in the Hornets' 6-1 defeat of the Mustangs at Braemar Arena. Photo by Gary Mukai, SportsEngine

With Edina starting a goaltender who wasn’t even on its roster last season, many would expect there to be an adjustment period this early in the season.

Through five games, the adjustment period, if there was one, appears to be a thing of the past.

Uma Corniea, Edina’s starting freshman goalie, has allowed just two goals this season. Her play, along with the rest of the defense, has helped propel the Hornets (4-1, 0-0) to four consecutive victories, including Tuesday’s 6-1 thrashing of two-time defending Class 1A champion Breck (7-2, 0-0) at Braemar Arena.

Prior to suiting up for Edina, which has won three consecutive Class 2A state championships, Corniea spent two seasons as the starting goaltender for the Mustangs, helping Breck to a pair of state championships. But Corniea elected to transfer and play in her home city with the Hornets.

“She’s from here, so it was an easy transition,” Edina coach Sami Reber said. “She’s so cheerful and so nice — it’s been easy to get along with her. She’s molded really well into our program.” 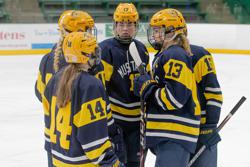 The early numbers seem to prove Reber’s point. But Tuesday’s matchup presented a unique situation as Corniea, a Princeton commit, went against her former school.

“I had to take into consideration their tendencies and how they play,” Corniea said. “I tried to stay calm and play like it was just another game.”

Despite the circumstances, Corniea excelled, stopping 23 of 24 Breck shots.

“I trusted (Corniea) to prepare the way she needed to,” Reber said. “She made some huge stops early and hung in there.”

Outside of Cornia, other Hornets stepped up and made plays, including sophomores Vivian Jungels and Jane Kuehl, who each registered goals. Their production helped supplement the performance of players such as junior forward Hannah Chorske, who had a pair of goals and two assists to pace the Hornets’ offense.

“It’s great to see these young girls developing in our program,” Reber said. “Those types of players are helpful in developing depth in a program.”

But while the scoring numbers stand out, so too does Edina’s staunch defensive unit. So far this season, the Hornets, ranked No. 2 in the Class 2A state coaches’ poll, have seen some of the state’s top scorers, a list that includes No. 1-1A Breck’s Ava Lindsay, Olivia Mobley and Ally Qualley. Only Lindsay managed a goal for the Mustangs Tuesday.

“I think our success comes from us just working together,” Corniea said. “We’re moving the puck and not being selfish.”

Defense has been integral for Edina, especially under the leadership of Reber, as the Hornets continue winning hardware to add to their trophy cabinet.

“We always take pride in how we play in the defensive zone,” Reber said. “We know we’re going to face very strong offensive teams throughout the season and we want to be ready when those top scorers are there.”

One of those teams is No. 1-2A Andover, which handed Edina a 1-0 loss in the season opener on Nov. 7. The Hornets have hardly let that loss deter their season, as Edina has outscored its opponents 26-1 and seen its young goaltender continue to thrive.

“We learned from it,” Reber said. “We knew we had more games to work with and take advantage. I’m really proud of how we have responded. I’m hopeful we will keep it going.” 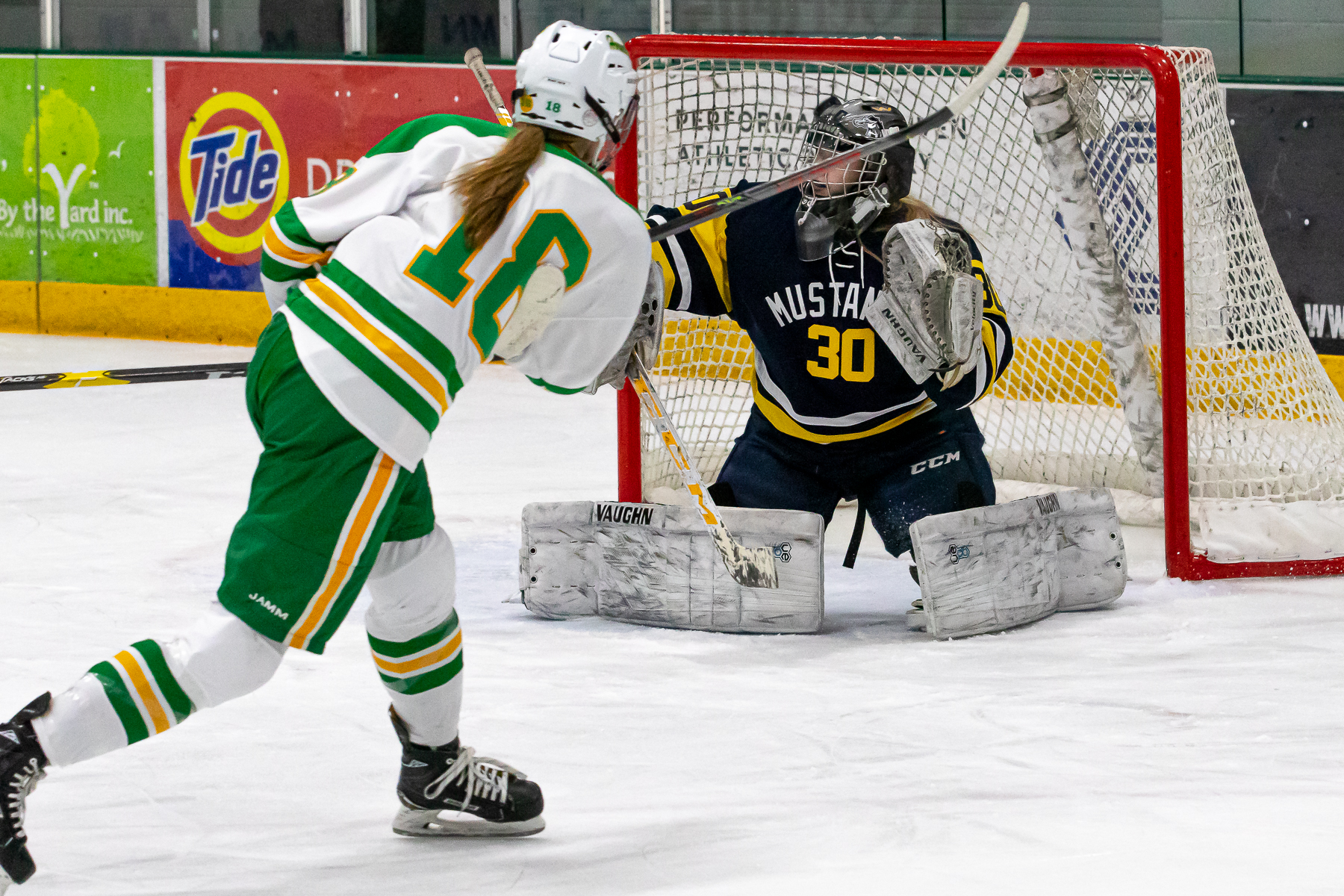 Edina forward Hannah Chorske fires a shot over the shoulder of Breck goalie Sarah Peterson in the first period. Chorske had four points in the Hornets' 6-1 defeat of the Mustangs Tuesday night in Edina. Photo by Gary Mukai, SportsEngine

It was a clash of the champions on Tuesday as defending two-time Class 1A state champion Breck visited Edina, which has won the last three Class 2A state titles. In a matchup featuring a number of the state’s top players, Edina imposed its big-school will, defeating the Mustangs 6-1 at Braemar Arena.

Edina (4-1, 0-0) showed its offensive muscle early. Junior forward Emma Conner opened the scoring during the first period by flicking a back-handed shot into the back of the net.

Later in the period, junior forward Hannah Chorske added a goal for the Hornets, who are ranked No. 2 in the Class 2A coaches’ poll. The Harvard commit finished with a pair of goals and two assists.

In the remaining two periods, Edina continued to pepper Breck with shots and cashed in. Senior forward Katie Davis, junior forward Kylie Roberts and sophomore forward Vivian Jungels each scored in the final 34 minutes of play, along with Chorske.

The Hornets fired 41 shots on the No. 1-1A Mustangs’ goal, with Sarah Peterson, Breck’s freshman goalie, making 35 saves. Edina freshman goalie Uma Corniea, who played for Breck (7-2, 0-0) as a seventh- and eighth-grader, saved 23 shots.

Breck freshman forward Ava Lindsay added her team-best seventh goal in the third period. It was just the second goal has Edina has allowed through five games this season. 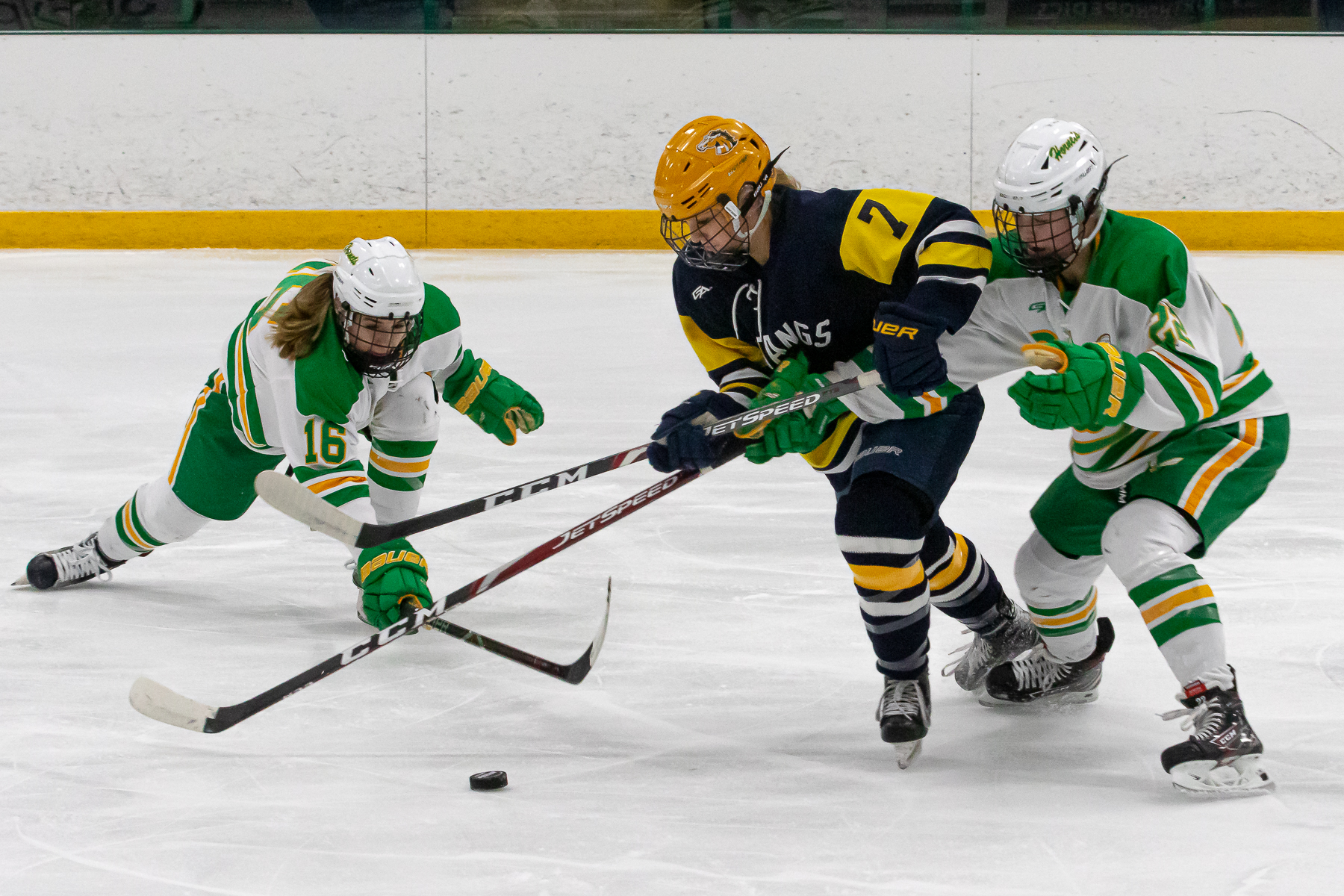