The Pioneers improved to 3-0 in the Metro East Conference standings behind Nina Steigauf's two-goal effort. 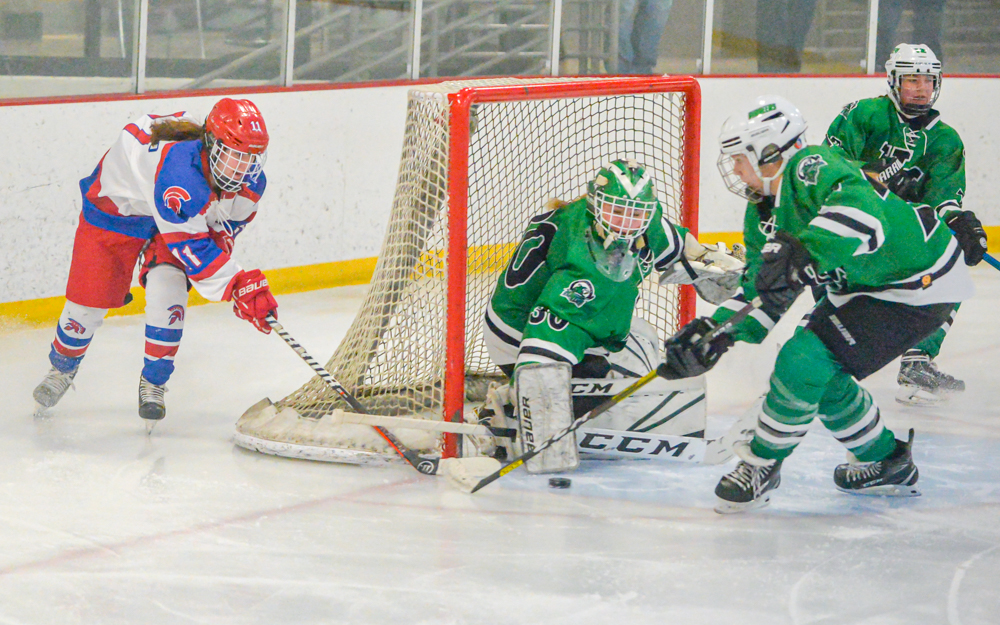 Hill-Murray senior forward Nina Steigauf continued her hot start to the season Tuesday, as she recorded two goals and an assist in a 4-0 Metro East Conference victory over Simley.

Steigauf’s shot, which Pioneers co-head coach Caesare Engstrom said is her greatest weapon on the ice, caused problems for the Spartans, who are ranked No. 8 in the Class 1A coaches’ poll, throughout the shutout.

In addition to Steigauf’s shot being on target, chemistry also seemed prevalent in the Pioneers’ matchup against Simley.

To help prepare for games, Hill-Murray (7-3-1, 3-0-0) teammates sing on the team bus on the way to the rink to help players focus and get dialed in. “Hannah Montana” songs, which according to Steigauf is usually the music chosen for the bus choir, is what inspired the No. 9-2A Pioneers’ efforts against the league rival Spartans (5-3-0, 1-1-0) on Tuesday in Inver Grove Heights.

Steigauf  is the engine to her team’s strong bond. She wants to make all Pioneers’ players feel welcome and important. Engstrom said to stay at their best, they need Steigauf to maintain her energy level in her role as a team captain.

“What she demonstrates on the ice is a good role model for the rest of the players to see,” Engstrom said. “They kind of feed off of her energy and what she contributes on a daily basis in the game.” 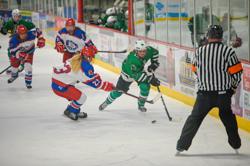 Having great role models is what inspired Steigauf, who has a team-best 10 goals and eight assists this season, to become the leader she is today.

“One of my role models is [assistant coach] Hannah Brandt,” the senior captain said. “All my life, I looked up to her and how she acted on the ice, how she performed, how she was as a person. And I tried to base my leadership off of kind of what she did.”

She watched Brandt, a U.S. Olympian and former Minnesota Golden Gopher and Minnesota Whitecaps player, in action when she played for Hill-Murray years ago.

“Both my sisters played Hill-Murray hockey, so they actually played with her and I went to all the games,” Steigauf said. “Just her style and how she always had her head up — I kind of skated the same way and I was like ‘wow I can really relate to this player.’”

Steigauf even started to change a few things about her game to emulate more of what Brandt has shown on the ice throughout her career.

Engstrom, meanwhile, is focused on the Pioneers performing well in conference play before thinking too far ahead to the team’s ultimate goal: getting back to the state tournament and challenging for the title.

Hill-Murray missed the tourney last year, losing in the Class 2A, Section 4 finale to White Bear Lake, which ended a six-year run of the Pioneers reaching state. They won the tournament in 2014 and 2015.

But behind their captain they seem poised to make another run at the crown.

“The big thing in a team coming together is that every single person is important ... [the hard work] is not for ourselves. It’s for each other,” Steigauf said. “We’re working for the person next to us, not for ourselves.” 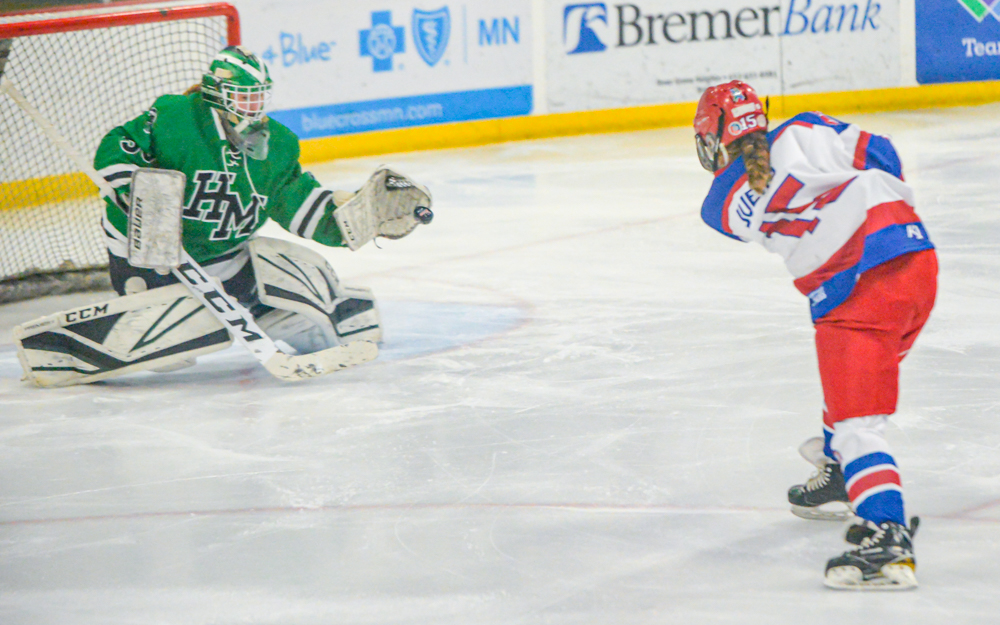 The Spartans' Olivia Juers takes a shot on goal in the third period but is denied by goaltender Rachel Kennedy. Hill-Murray beat Simley 4-0 in a Metro East Conference rivalry game. Photo by Earl J. Ebensteiner, SportsEngine

Steigauf put the Pioneers (7-3-1, 3-0-0) in front with her ninth goal of the season in the first period. Simley (5-3-0, 1-1-0) came close to tying it minutes later on the counter, but Hill-Murray goalie Rachel Kennedy blocked the potential game-tying shot.

The Pioneers, ranked No. 9 in the Class 2A coaches’ poll, increased their lead to 2-0 in the second period when Delaney Fabian scored with an assist from Anna Vlaisavljevich and Sammy Bever. Simley generated four scoring opportunities during the period but the No. 8-1A Spartans couldn’t beat Kennedy in net, who finished the game with 14 saves.

Simley goalie Hailey Ries made 19 saves to try and keep the Spartans in the game, but the Pioneers added two more goals in the third, including Steigauf’s second tally, to make the comeback unobtainable. Kristin Kaufman had Hill-Murray’s other goal in the period. 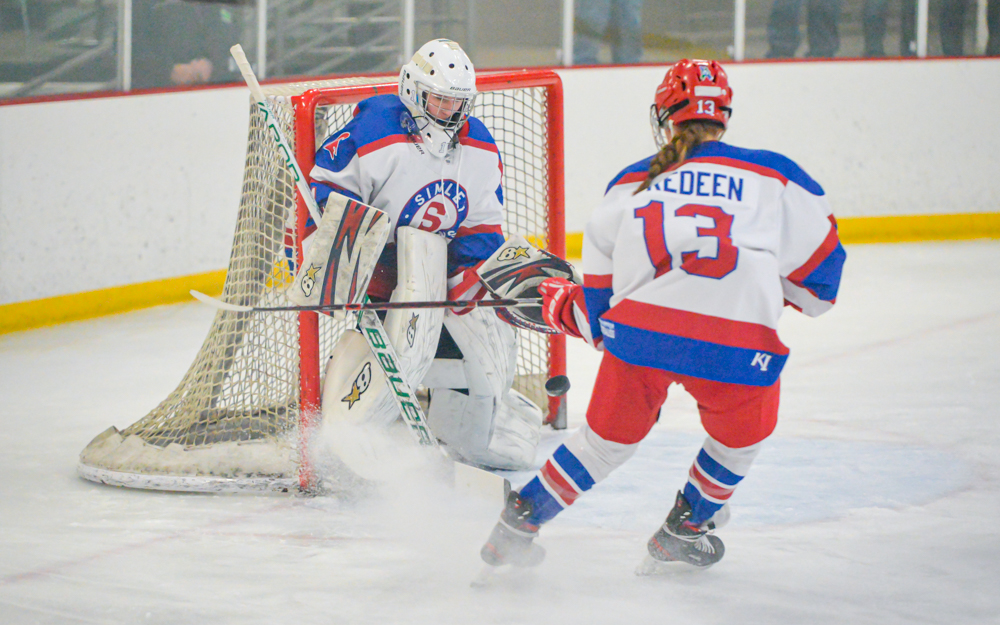