Mackenzie Bourgerie scored the game-winning goal for the River Hawks in a quarterfinal matchup at the Walser Invitational in Edina. 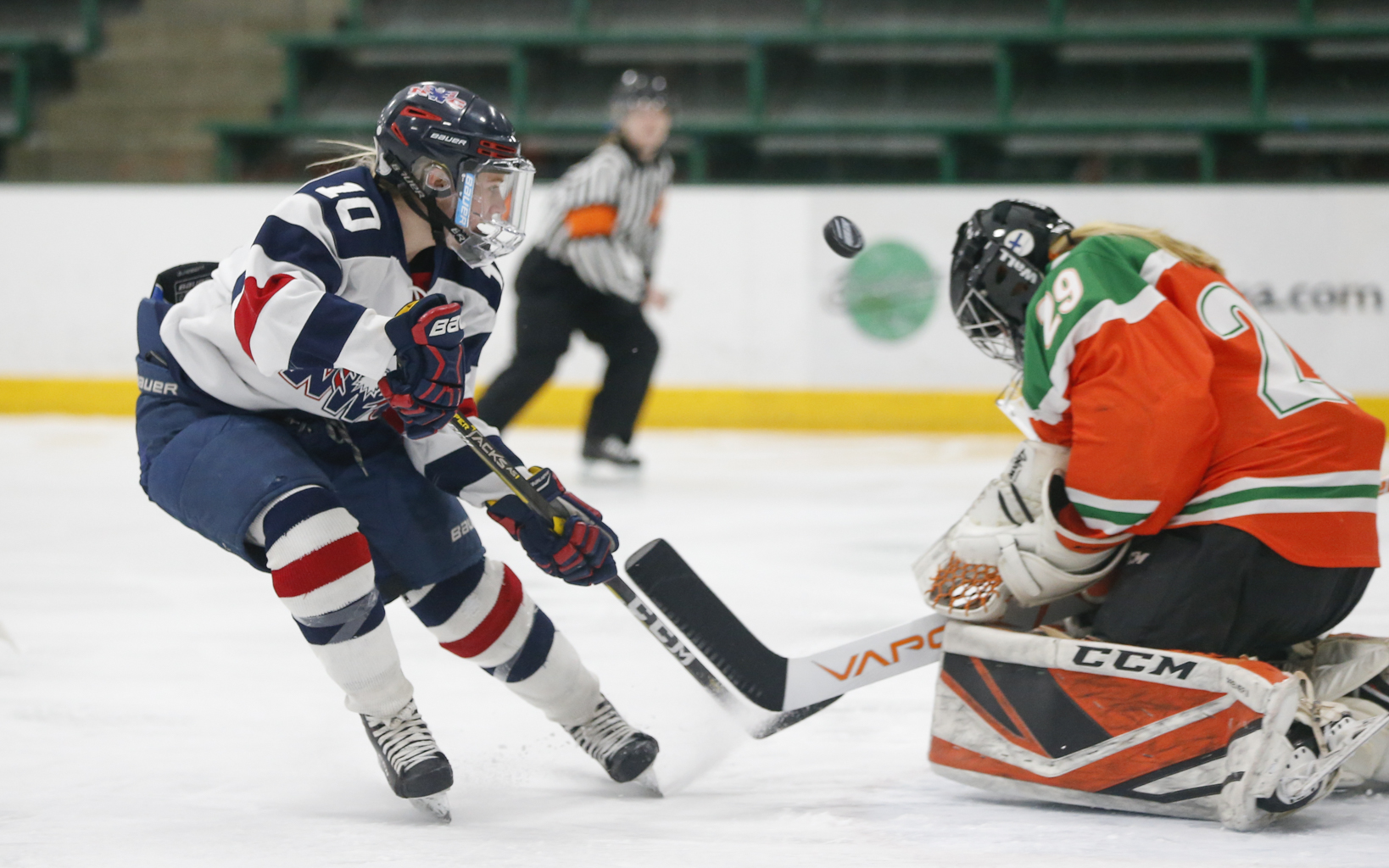 North Wright County's Mackenzie Bourgerie (10) tries to track down a rebound against Grand Rapids/Greenway Thursday afternoon. Bourgerie had a goal and an assist in the River Hawks’ 4-1 victory over the Lightning. Photo by Jeff Lawler, SportsEngine

North Wright County senior Mackenzie Bourgerie couldn’t convert on a breakaway chance early in the game against Grand Rapids/Greenway after shooting the puck into the goaltender, trying to go five-hole. So, Bourgerie adjusted when she got another chance.

“She loves to shoot the puck, and then I looked at her and she said, ‘yeah coach, I think I’m going to try and move next time,’” said North Wright County coach Cailyn McCauley.

That move was a pretty stickhandling play in alone in front of the net, faking the goaltender down to the ice and allowing for Bourgerie to easily put the puck in the net for her 13th goal of the season. Her unassisted tally put the River Hawks up 2-1 late in the second period of an eventual 4-1 victory in a quarterfinal matchup Thursday at the 13th annual Walser Girls Hockey Invitational at Braemar Arena in Edina.

Bourgerie’s move to net the winning goal is a bit of a go-to for her.

The St. Cloud State commit is her team’s leading scorer in all three categories. She added an assist in the game to give her 12 helpers and 25 points this season.

“She’s got good hands, and when she’s on, she’s on,” McCauley said. “It was pretty cool to see the move and how well it worked out.”

The Lightning struck first just 3 minutes, 27 seconds into the game with an unassisted goal from senior Ellie Tillma, her sixth-straight game with a goal.

The River Hawks, ranked No. 9 in the Class 2A coaches’ poll, tied it up with 1 minute, 23 seconds left in the first period on a goal right in front of the net from sophomore Sydney Petersen. She extended her point streak to six games with her sixth goal of the season with assists from starting linemates freshman Lily Gillespie and senior Maddy Skelton.

The puck popped out to Petersen, who sent a blind shot towards the net that trickled in through the five-hole, she said. She saw the puck go in the net and then was tackled by Gillespie a moment later in celebration. It gave the River Hawks some life going into the first intermission tied.

“Oh yeah, we just came back and killed it,” Petersen said. “I think we just need to get one in.”

North Wright County came out buzzing in the second period and really didn’t let up through the end of the game. It killed back-to-back penalties in the second before Bourgerie’s go-ahead goal.

“After that first period, we told them, ‘you guys looked like you were on your heels,’” McCauley said. “’Let’s make them go on theirs.’

“They did really well and took it to them.”

The River Hawks didn’t let the Lightning strike twice, adding to their lead just 1 minutes, 24 seconds into the third period on a point shot through traffic from junior defenseman Mackenzie Dunn for her second goal of the season. Skelton added another goal a few minutes later.

The scoring came from multiple lines for the River Hawks, some added depth they didn’t have last year. At the tournament a year ago, their top line of Bourgerie, Sydney Lemke and then-freshman Chloe Finnerty were among the state’s leaders in goals, points and assists.

“Last year, we had one really, really strong line,” McCauley said. “We’d play against good teams, and we did what we could and sometimes we just couldn’t end up on top.

“But this year having two strong lines with a third line that does well has been phenomenal.” 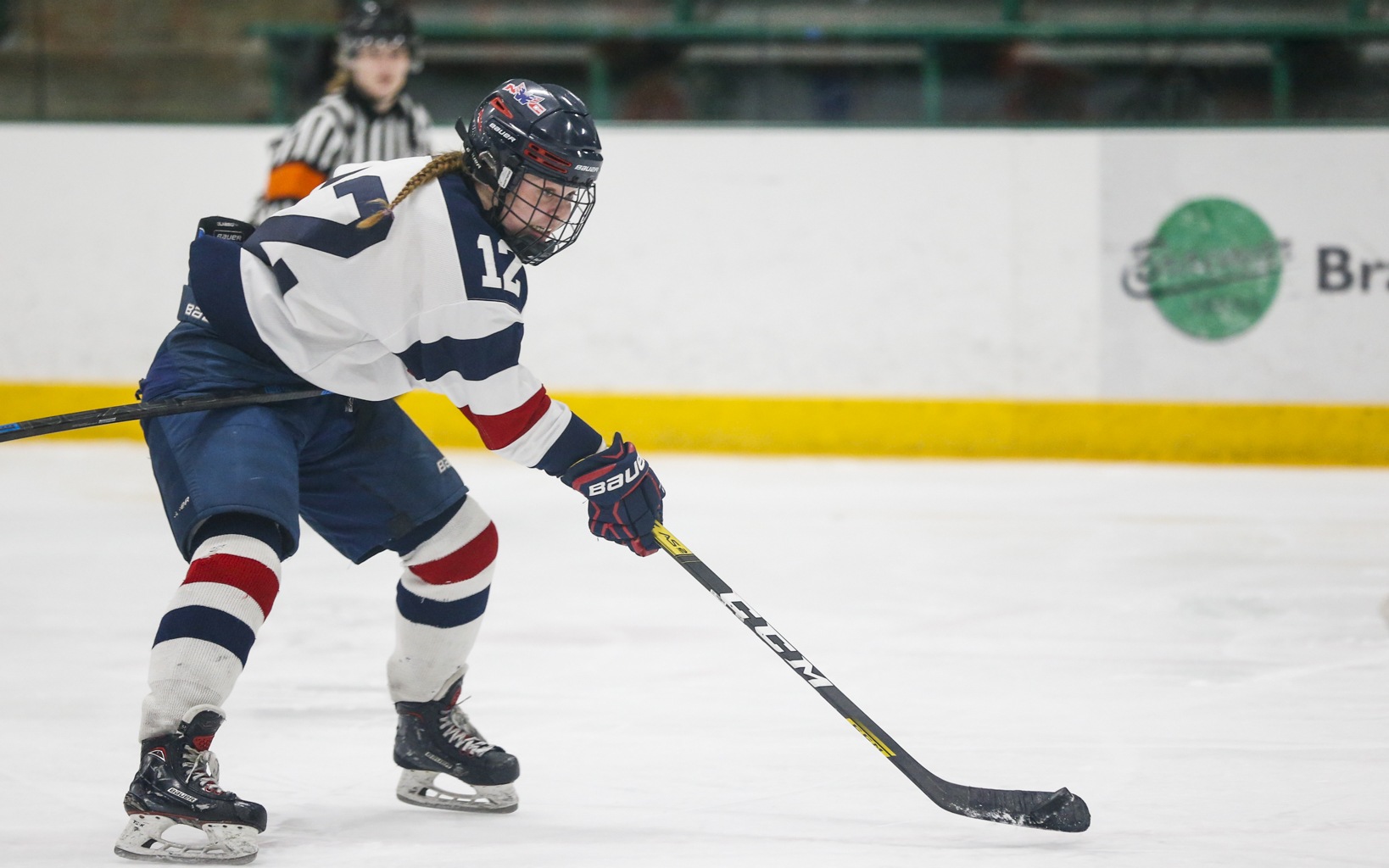 North Wright County's Maddy Skelton (12) goes to her backhand for a goal against Grand Rapids/Greenway Thursday at Braemar Arena. Skelton added an assist in the River Hawks’ 4-1 victory over the Lightning. Photo by Jeff Lawler, SportsEngine

North Wright County didn’t let an early 1-0 deficit get it down. Instead, the River Hawks came back to tie the game, then controlled play for much of the way to score three more unanswered goals for a 4-1 victory over Grand Rapids/Greenway.

The River Hawks (7-4-1, 1-3-0) defeated their fellow Class 2A, Section 8 opponent in the quarterfinals of the 13th annual Walser Girls Hockey Invitational on Thursday at Braemar Arena in Edina.

North Wright County senior Mackenzie Bourgerie scored her 13th of the season to give her team a 2-1 lead late in the second period. Then, the River Hawks took a two-goal lead 1 minute, 24 seconds into the third period on a point shot through traffic from junior defenseman Mackenzie Dunn for her second goal of the season. Senior Maddy Skelton added another goal a few minutes later with a backhanded shot.

The River Hawks, ranked No. 9 in the Class 2A coaches’ poll, have won four of their past five games, while the Lightning (6-6-1) have lost three in a row.

The game was a rematch of last year’s consolation championship at the Walser Invitational. The River Hawks shut out the Lightning 2-0 with goals from Sydney Lemke and Dunn, and 21 saves in net from Anna LaRose.

The River Hawks will face Breck at 5 p.m. on Dec. 27 in the semifinals. 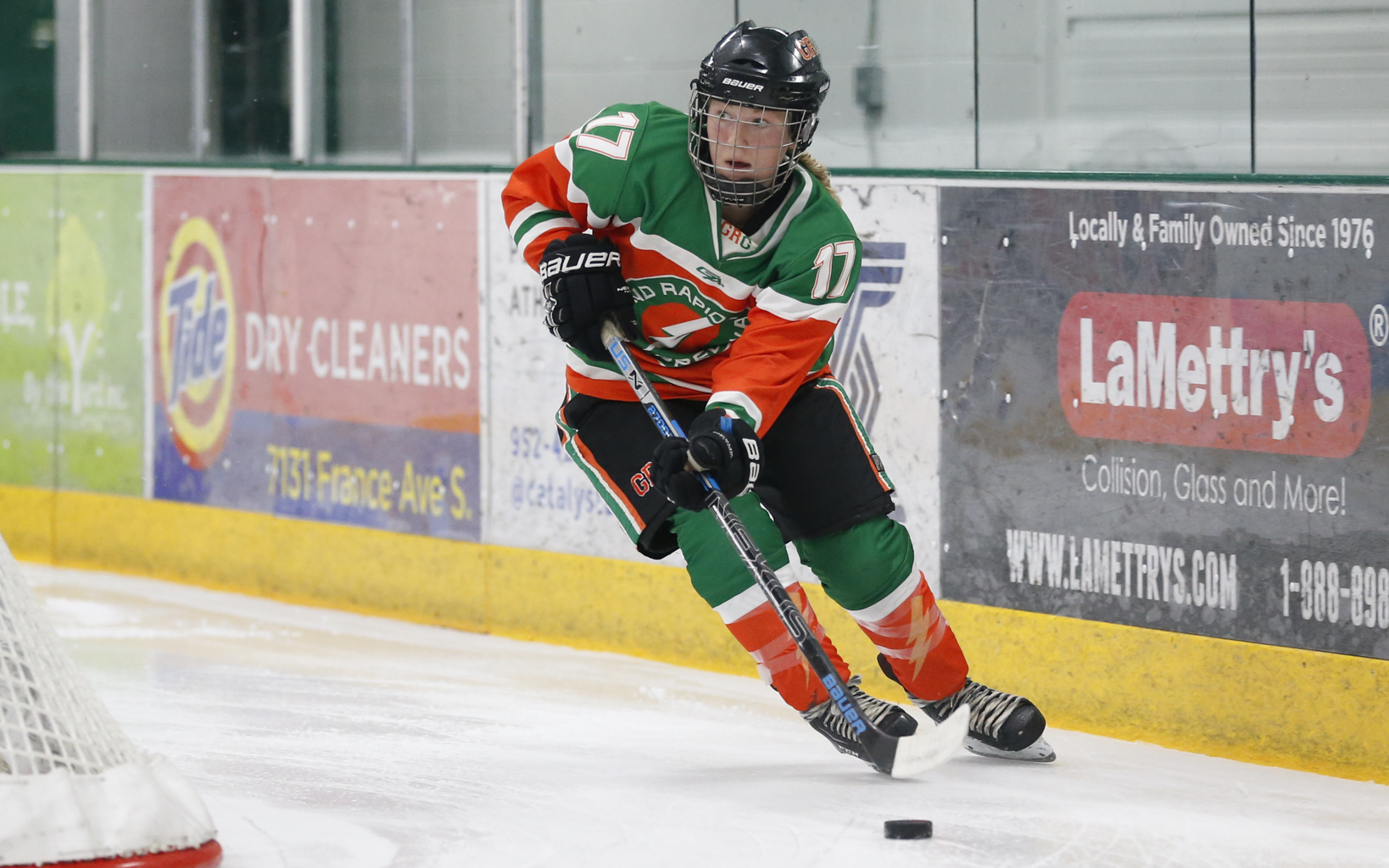 Grand Rapids/Greenway's Ellie Tillma (17) circles behind the River Hawks' net Thursday afternoon. Tillma had the Lightning’s goal in their 4-1 loss to the River Hawks in the Walser Invitational at Braemar Arena. Photo by Jeff Lawler, SportsEngine