Kylie Melz scored the game-winning goal with 44 seconds left in regulation, giving the Skippers their second victory over the Eagles in a two-week period. 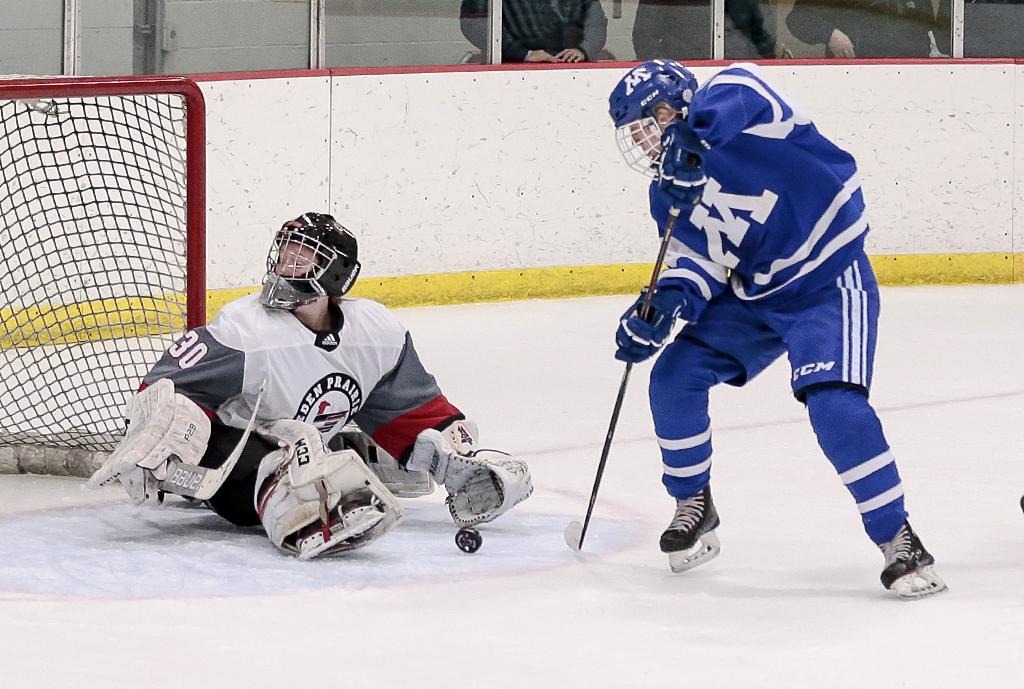 Minnetonka's Kylie Melz picks up her own rebound and scores with just 44 second left in the game. Melz's two goals help pushed the Skippers to a 4-3 win over the Eagles in the Mid-Winter Meltdown on Saturday night. Photo by Cheryl A. Myers, SportsEngine

It was set up to be a battle — and it was. But in the end, depth and hard work were enough for Minnetonka to prevail on Saturday night.

The Skippers, ranked No. 4 in the Class 2A coaches’ poll, overcame some obstacles and defeated Lake Conference rival Eden Prairie 4-3 to claim the Mid-Winter Meltdown championship hardware in Eden Prairie.

Not only did the Skippers trail twice, but two of their top defenders were absent, as they’re off playing for the United States in the U18 Women’s World Championships in Slovakia.

The game was tied 3-3 when Anna Sorenson went off for tripping, giving No. 5-2A Eden Prairie a power play with 1 minute, 51 seconds left in regulation. That’s when Minnetonka’s Lacey Martin worked hard on the forecheck and won the puck, which she slid over to Kyle Melz, who scored her second goal of the game — this time the game-winner — with 44 seconds left.

“We’ve been in lots of different positions this year, and we talk about that,” said Skippers coach Tracy Cassano. “It’s all about learning and the process. Just move forward and win the next shift.” 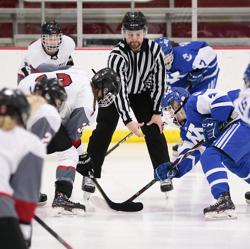 Melz had tied the game 2-2 in the second period with her first goal, helping the Skippers (13-2-0, 4-1-0) overcome an early 2-0 deficit in the game’s middle period. Eden Prairie, however, took the lead again in the third period, though the Skippers made it 3-3 less than a minute later on a Josie Helling goal.

“Our coaches, they’ve established a positive attitude — always, no matter what,” Melz said. “Even with the little things, just to keep it positive and keep a high-energy bench, it allows us to get those moments and capitalize on the opportunities against the really good teams that we play.”

Saturday’s tilt was a very different matchup from the one Minnetonka and Eden Prairie played on Dec. 17, which resulted in the Skippers defeating the Eagles 4-0. Minnetonka had defenders Rory Guilday (15 points) and Maggie Nicholson (13 points) for that meeting, the last time they played with the Skippers before leaving for Slovakia.

Since their departure, Minnetonka is 5-0.

“This stretch of games without them, if somebody would have said, ‘Hey, you’ll go 5-0 without them,’ I would have been like, ‘wow, really?’” Cassano said. “I think that speaks to — through our roster, we have that depth, we have the experience. We’re not just a one- or two-player team.”

The Skippers have just trucked on. They’ve mostly run the same schemes, just with more players stepping up into roles. Depth was an expected strength coming into this season, and that’s shown to be true now, when Minnetonka needs it most.

“It’s amazing,” Melz said. “It’s probably the best I could ask for, as teammates. It’s nice that we can all trust each other. It really just gives us a deeper bond; more depth, more bond — the more we can do what we want to do.”

The Skippers won’t be at full strength until early January, and even then they have room to improve — they lost to No. 1-2A Andover (3-1 on Nov. 23) and No. 2-2A Edina (4-1 on Dec. 7) already this season. But they’ve proven to be contenders recently, even without two standout players who are off with the national team.

“We’ve been playing tough teams, but we’re showing the state how deep we are and how talented we truly are,” Cassano said. 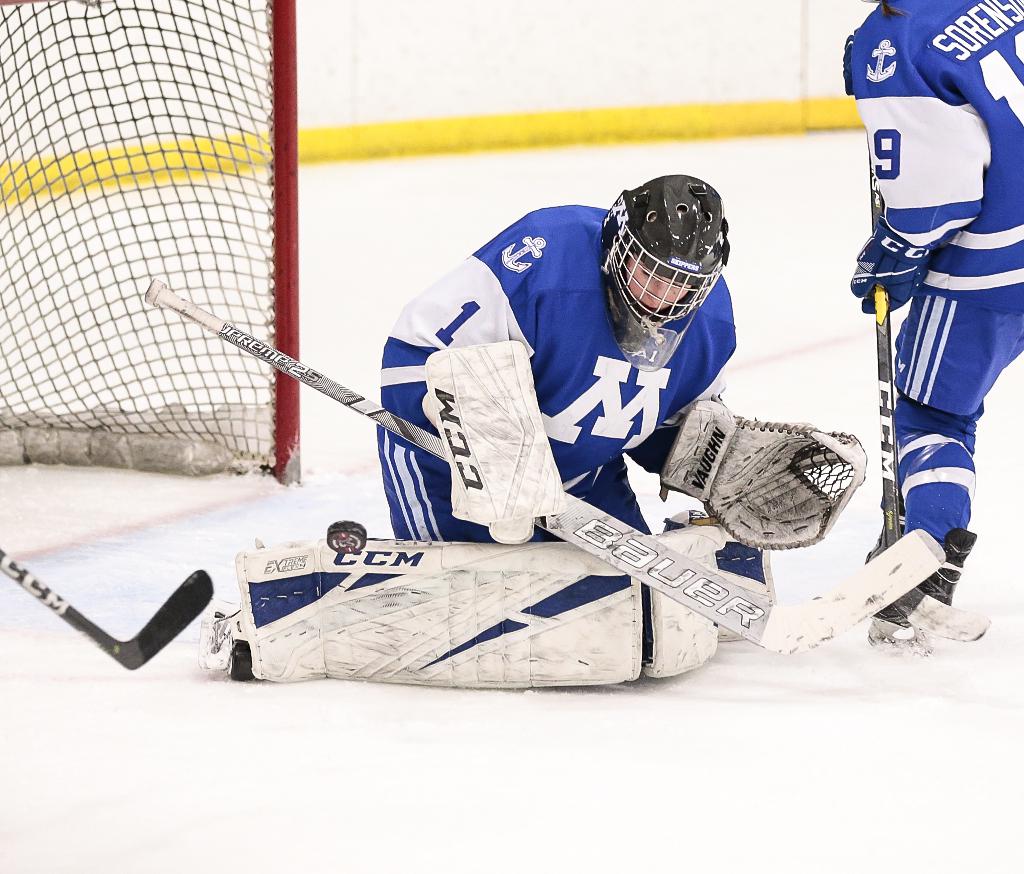 Minnetonka goalie Brynn Dulac makes a save in the second period and sends the puck to the corner. Dulac tallied 36 saves in the Skippers' 4-3 win capturing the Mid-Winter Meltdown title. Photo by Cheryl A. Myers, SportsEngine

Melz scored shorthanded with 44 seconds left in the third period to put the Skippers, ranked No. 4 in the Class 2A coaches’ poll, ahead. Eden Prairie had gone ahead 3-2 on a Sydney Langseth goal, but Josie Helling tied it on the Skippers’ seventh power play of the game, which set up Melz’s game-winning tally.

After a scoreless first period, the No. 5-2A Eagles went up 2-0 in the second on a breakaway shorthanded goal from Langseth and a deflection from Grace Kuipers. Minnetonka tied it with a pair of power-play goals from Lacey Martin and Melz to make it 2-2 heading into the third period.

The Skippers (13-2-0, 4-1-0) have now beaten the Eagles (9-5-1, 1-3-0) twice in the last two weeks, having won 4-0 in a Lake Conference matchup on Dec. 17. This time out, Minnetonka did it without top defenders Rory Guilday and Maggie Nicholson, who are playing with Team USA at the U18 Women’s World Championships in Slovakia.

Eagles goaltender Molly Goergen had 28 saves, while the Skippers’ Brynn Dulac made 36 saves. 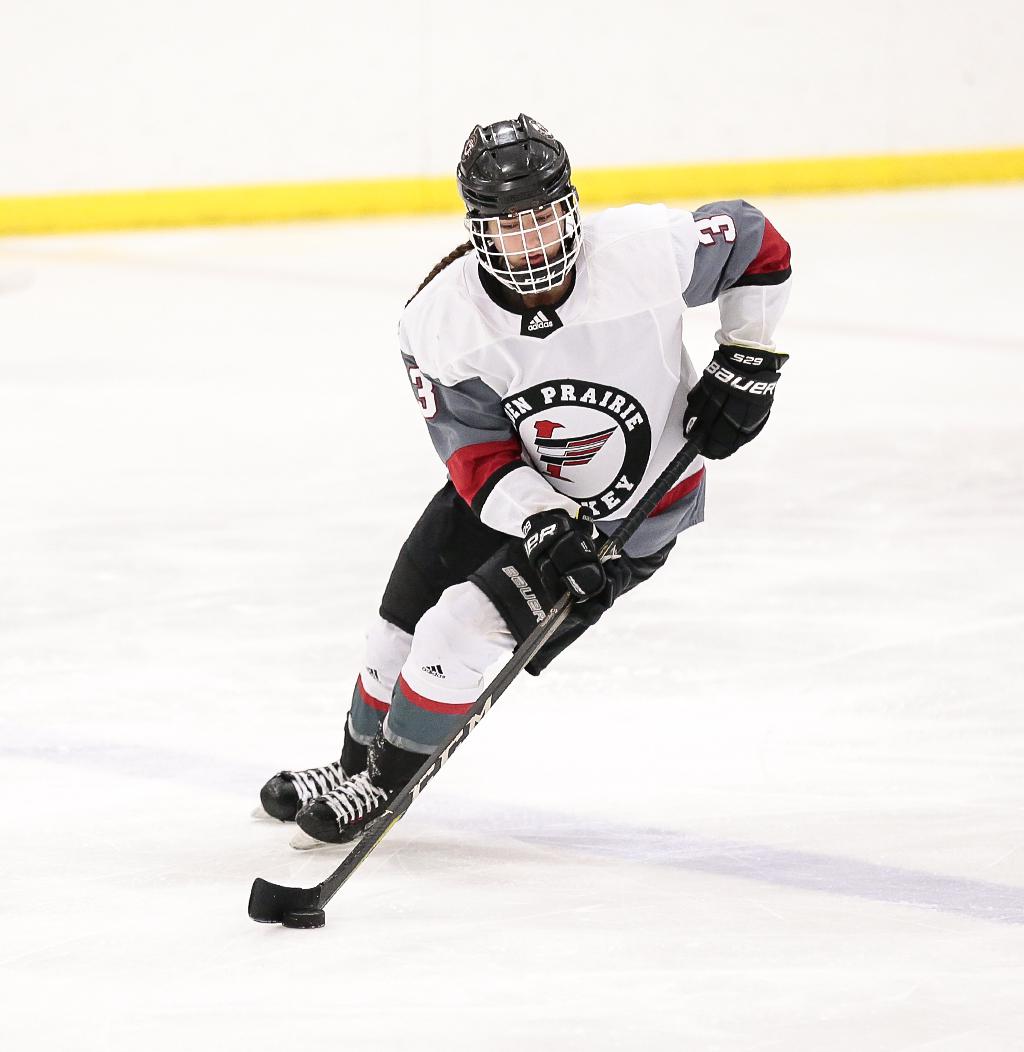 The Eagles' Sydney Langseth turns the puck around at the blue line. Langseth scored two goals for Eden Prairie in a 4-3 loss to their Lake Conference rivals from Minnetonka. Photo by Cheryl A. Myers, SportsEngine