The Lumberjacks scoring started with a short-handed goal from senior Taylor Nelson in the first period. 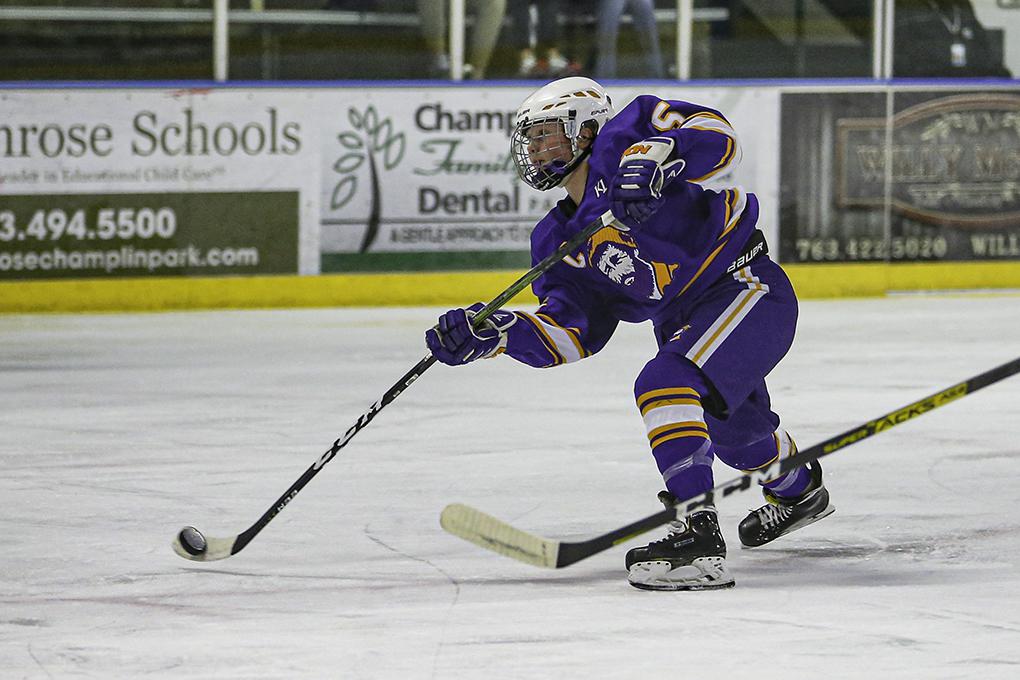 Cloquet-Esko-Carlton senior Taylor Nelson (5) wound into a shot that became her team's first goal in a 4-2 victory at Champlin Park/Coon Rapids. Photo by Mark Hvidsten, SportsEngine

The Cloquet-Esko-Carlton girls’ hockey team hadn’t played a game since before Christmas. Without a holiday tournament on their schedule, they continued with practices.

Any early rust they showed in their first game back Thursday came in the form of penalties: The Lumberjacks took five of them in the first period against Class 2A-opponent Champlin Park/Coon Rapids (9-7-0, 6-3-0).

“I think we were pretty disappointed the first period in terms of penalties,” said coach Courtney Olin. “I believe, prior to this game, we were averaging a penalty a game. I think it gave us a little bit of adversity to work through.”

They successfully chipped away after the rough start and ended up with a 4-2 victory at Champlin Ice Forum. The victory for the Lumberjacks, ranked No. 3 in the Class 1A coaches’ poll, pushed their winning streak to 11 games as they improved to 12-2-0 this season. They’ve outscored opponents 28-5 the past five games. 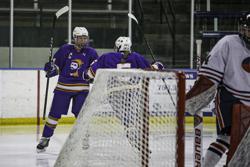 Down 1-0, Cloquet-Esko-Carlton, (12-2-0, 2-0-0) got a short-handed goal from senior Taylor Nelson in the first period. Her top-shelf shot off the rush rang iron on its way into the net as she extended her goal streak to nine games.

Senior Kiana Bender made it 2-2 with a goal late in the second period. She added another to put the Lumberjacks ahead for good in the third and extend her goal streak to eight games. Sophomore Tenley Stewart made it 4-2 on her point shot with one second left on a 5-on-3 advantage later in the third period. The Lumberjacks also ended the game a perfect 5-for-5 on the penalty kill.

“We just had to stop taking penalties,” Bender said. “I think we played as a team more in the second period and the third period than in the first.”

Champlin Park/Coon Rapids junior Delaney Johnson scored both goals for her team, each coming in the first period, and her second game in a row with a pair of goals.

Scoring goals of the rush, especially from the top line, is pretty standard stuff for the Lumberjacks, according to Olin.

“So it didn’t necessarily take me by surprise to see a couple of goals come from breakaways,” Olin said. “We have some very skilled top players that we’re very proud of, and they have some finesse and they typically score on breakaways.”

She’s, of course, referring to the top line of seniors Bender at left wing, Nelson on the right side and Dea DeLeon in the middle. They’re also a true co-op line, with Nelson as the only Carlton play on the team, Bender hailing from Cloquet and DeLeon from Esko. Olin said she’s been fortunate enough to coach them throughout her five-year tenure when they started as eighth-graders.

Bender is one of the hardest working players Olin said she’s ever been around, as a player or coach. Someone who “would run through a brick wall if you asked her to for her teammates,” Olin added. Nelson is a very vocal leader, Olin said, and has played with Bender since they were little kids.

Switching up their lines just isn’t an option.

“We’ve tried a couple times to separate them from lines, and it won’t work,” Olin said.

“It makes the game way more fun,” Nelson said. “You got a buddy next to you. I mean, your whole team are buddies, but when you have someone that clicks super well… I think it makes the game even more fun.”

“They have such a high tempo,” Olin said. “So I think the biggest thing is they just don’t quit.”

And quitting would have been an easy thing to do after a frustrating and penalty-filled first period, Olin acknowledged. It was some of that senior leadership between periods that helped them battle through to eventually get the victory.

“Both teams battled hard,” Nelson said. “(Coach) just told us to keep playing our game. The score showed it.” 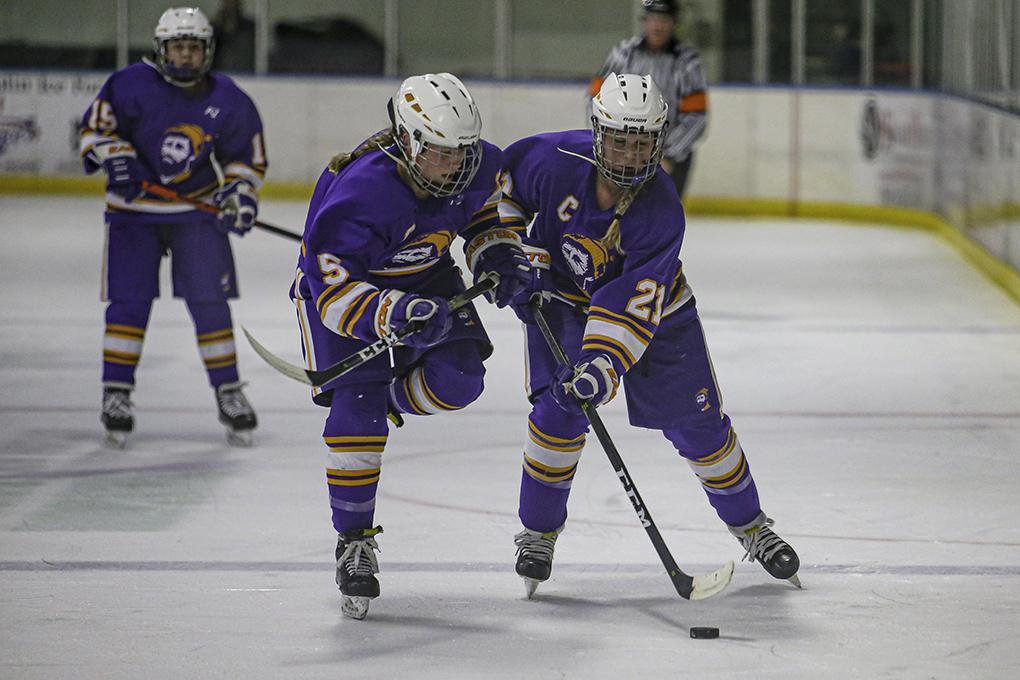 Lumberjacks teammates Taylor Nelson (5) and Kiana Bender (21) collided bringing the puck up the ice in the third period. The play ended in Bender's second goal and a 3-2 lead for Cloquet-Esko-Carlton. Photo by Mark Hvidsten, SportsEngine

The Cloquet-Esko-Carlton girls’ hockey team hadn’t played a game since before Christmas.

If there was any rust to speak of over the holidays, the Lumberjacks chipped away at it early and ended up with a 4-2 victory over Class 2A-opponent Champlin Park/Coon Rapids on Thursday evening at the Champlin Ice Forum.

The win extended the Lumberjacks’ winning streak to 11 games as they improved to 12-2-0 on the season. They’re ranked No. 3 in the Class 1A coaches’ poll.

The Lumberjacks (12-2-0, 2-0-0) got a short-handed goal from senior Taylor Nelson to tie the game 1-1 before senior Kiana Bender added a pair of goals to put the Lumberjacks ahead 3-2 in the third period.  Sophomore Tenley Stewart made it 4-2 on her point shot with one second left on a 5-on-3 advantage. The Lumberjacks went a perfect 5-for-5 on the penalty kill.

For Champlin Park/Coon Rapids (9-7-0, 6-3-0), junior Delaney Johnson had a pair of goals in the game, each coming in the first period, for the second game in a row.

In net, freshman Araya Kiminski made 20 saves for the Lumberjacks, while freshman Elyia Johnson stopped 12 shots at the other end. 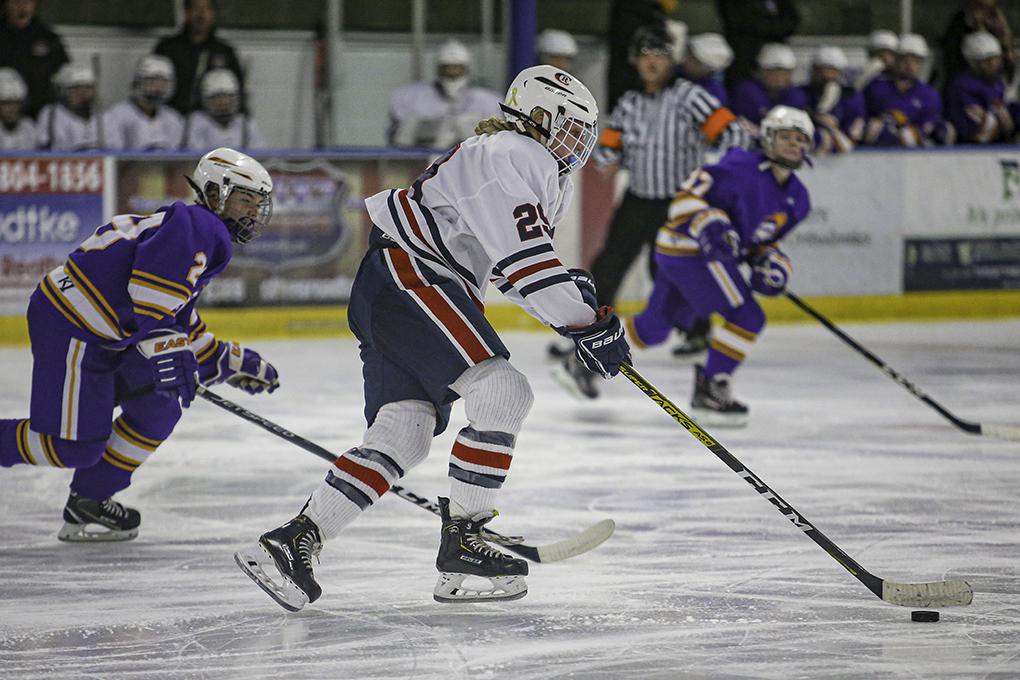 Champlin Park/Coon Rapids junior Delaney Johnson rushed to bring the puck up the ice in the third period. Johnson's two first-period goals provided all the scoring for her team. Photo by Mark Hvidsten, SportsEngine