Celia Midtbo capped off a three point night by scoring the OT winner under the lights at Parade Ice Garden. 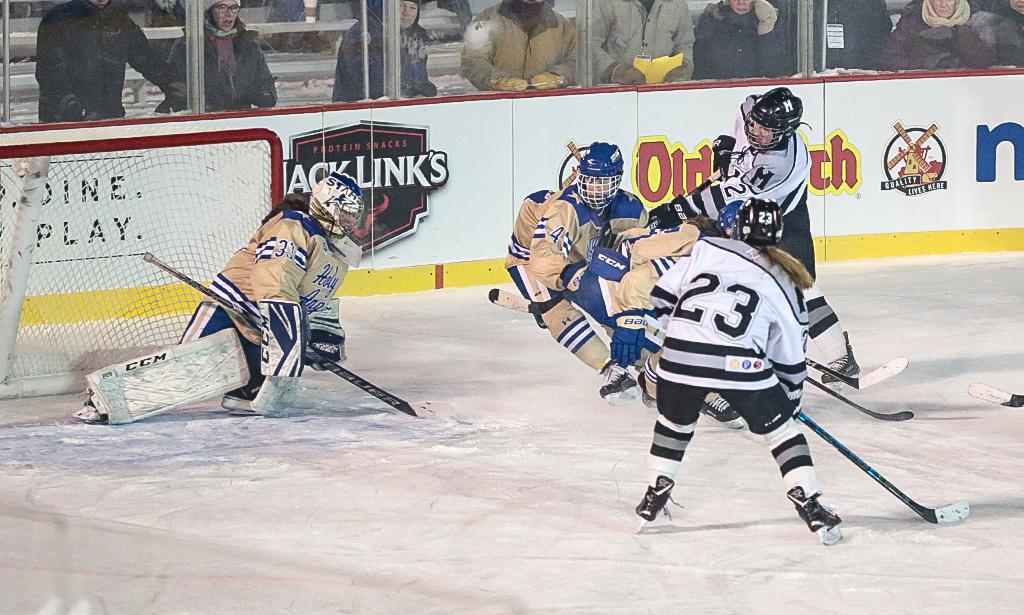 Celia Midtbo (2) scores the game-winning goal in overtime to give Minneapolis a 3-2 win over Holy Angels in the opening game of Hockey Day Minnesota festivities. Photo by Cheryl A. Myers, SportsEngine 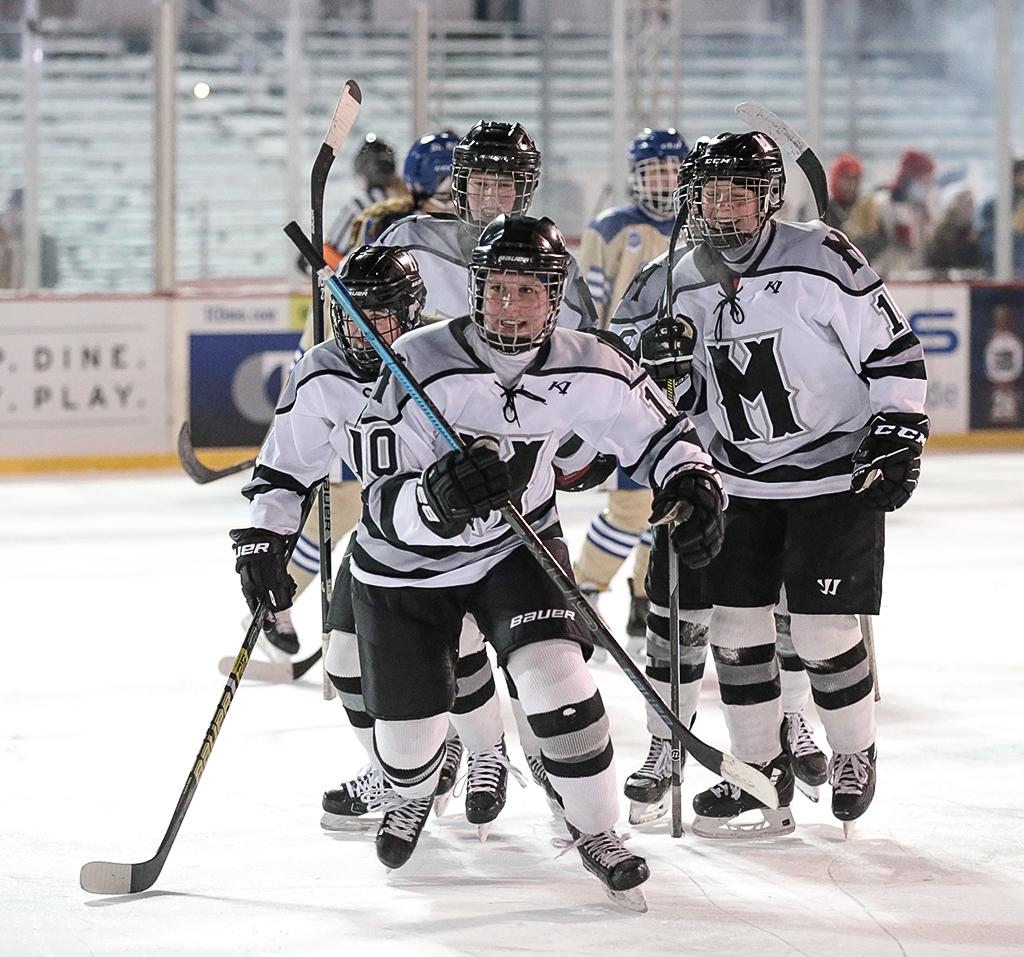 Julia Stevens (10) heads to the bench to celebrate her goal with teammates. Stevens had a goal and an assist in Minneapolis' 3-2 overtime win over Holy Angels on Thursday night. Photo by Cheryl A. Myers, SportsEngine

Hockey Day Minnesota 2020 couldn’t have started much better. Well, an air temperature above zero might have been nice. But seeing an overtime game-winner scored is a nice compromise.

In a battle between Metro West Conference foes, Minneapolis defeated Holy Angels 3-2 in overtime Thursday evening under the lights at Parade Stadium.

Minneapolis freshman Celia Midtbo put on a show with a three-point night, including an unassisted overtime winner about halfway through the extra session.

“I just came around the net and threw it hoping for the best,” Midtbo said. “A couple seconds after, I knew it went in. It feels great. I don’t know how to explain it.” 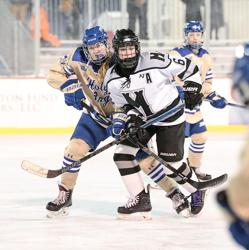 After falling behind 1-0 with three minutes left in the first period on senior Bridget McGuire’s team-leading 17th goal of the season for Holy Angels, Minneapolis took advantage of its power plays in the middle period to take a 2-1 lead. Junior forward Julia Stevens tied the game with a point shot through traffic with the extra skater midway through the second period for her 10th goal of the season. She also added an assist in the game.

“I think the first period was a little bit rough,” Stevens said. “But I think we definitely picked it up in the second and third periods, and I think we just started to play more as a team.”

For Midtbo, it was her third multi-goal game of the season and second in as many games. She now has eight goals and 22 points on the season. She’s a smart player that has good hands and vision, according to her coach Sarma Ozmen.

“Our power play’s been doing great this year, and she’s been a big piece of it,” said Ozmen.

As far as the frigid temperatures and outdoor conditions, Minneapolis played an outdoor game last Saturday and squeezed in a practice Wednesday. While fans could take comfort in a warming tent or stand by some of the fire pits scattered around, heat was also pumped into the bench area for players and coaches.

“We want all these little girls that came here today to be proud of our town and want to play for us,” Ozmen said. “That’s the big goal. To see the skyline in the background and get to enjoy this is amazing.” 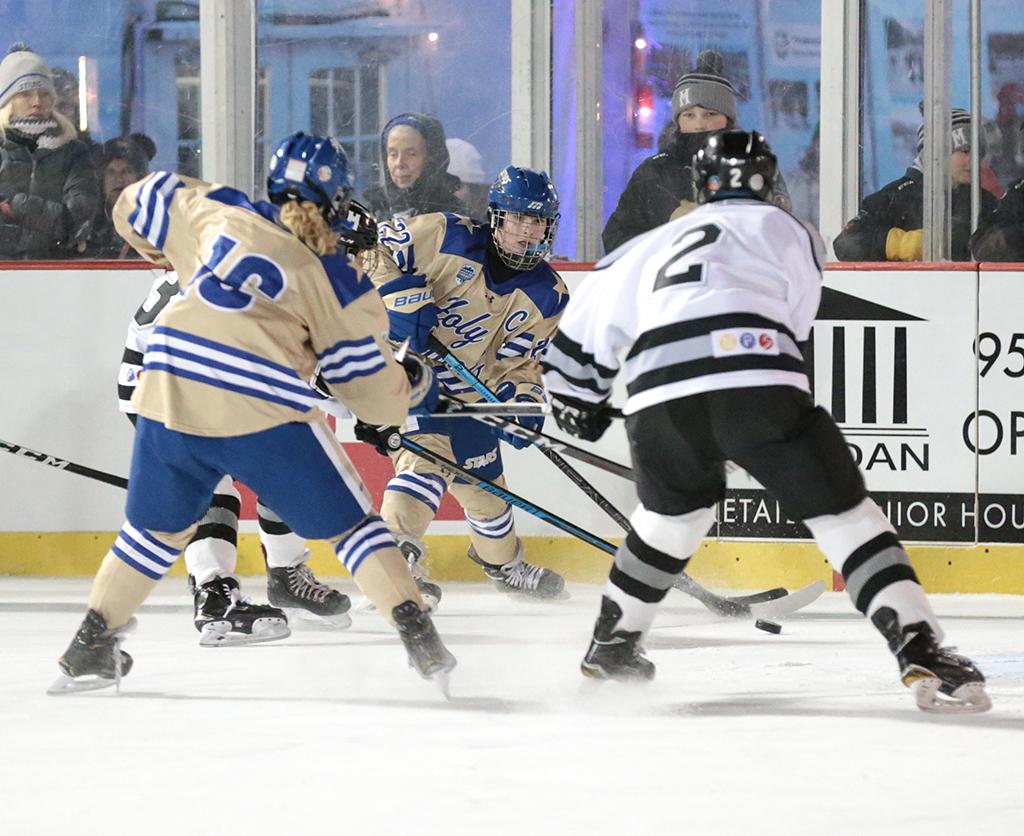 Bridget McGuire (22) sends a pass out in front of the net. McGuire scored Holy Angels' first goal, giving the Stars' a 1-0 lead at the end of the first period. Photo by Cheryl A. Myers, SportsEngine