Seniors Addie Burton and Lily Delianedis had big nights for the Bears in a rout of the Lightning. 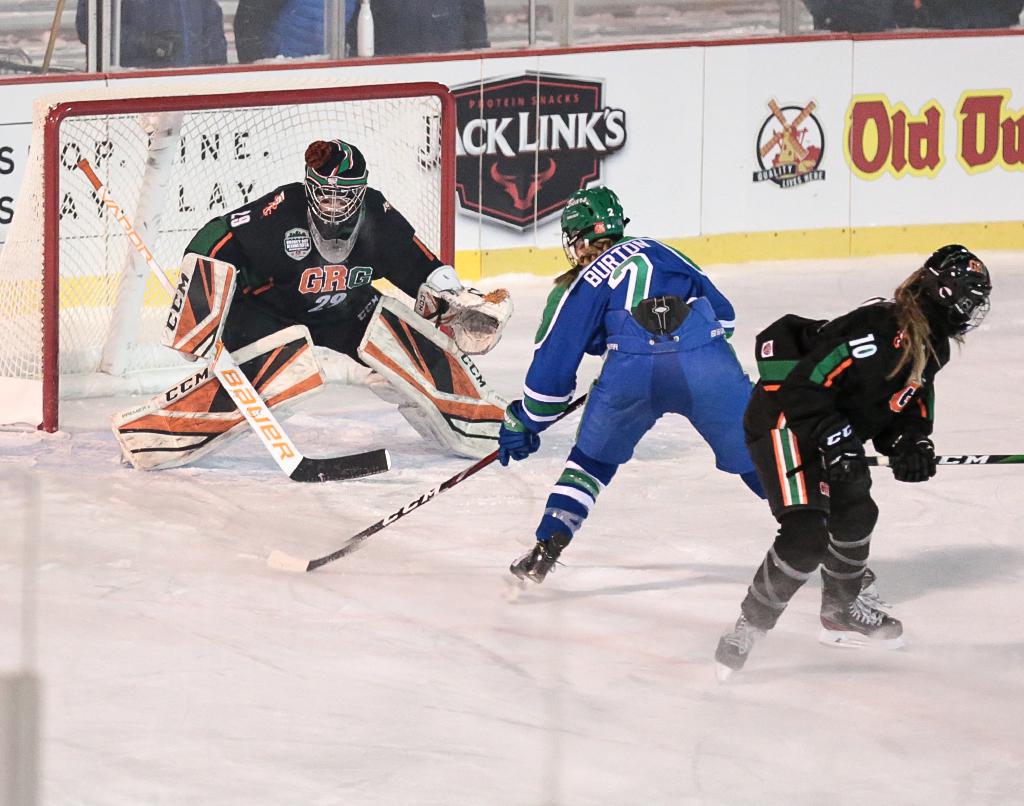 Adelaide Burton (2) scores a short-handed goal in the first period. Burton's three goals helped lead Blake to a 8-0 rout over visiting Grand Rapids/Greenway during the opening night of Hockey Day in Minnesota. Photo by Cheryl A. Myers, SportsEngine

Even with the bone-chilling weather and the pomp-and-circumstance that is Hockey Day Minnesota, Blake girls’ hockey coach Shawn Reid had one factor stick out to him after Thursday’s game.

Senior Addie Burton mentioned the same thing. Her teammate Lily Delianedis called it “one of the most complete games we’ve played all season.” Not a bad way to sum up an 8-0 Blake victory over Grand Rapids/Greenway (8-9-2) at Parade Stadium. Both Burton and Delianedis recorded hat tricks in the game.

The dominant victory comes during a recent tough stretch for Blake, ranked No. 6 in the Class 2A coaches’ poll. The Bears saw a six-game winning streak come to an abrupt halt with a pair of losses in holiday-tournament play, then sprinkle in losses to Edina and Breck, and Blake (12-5-1, 3-1-0) had lost 4-of-6 games coming into Thursday night’s big-stage game right across the street from their school. 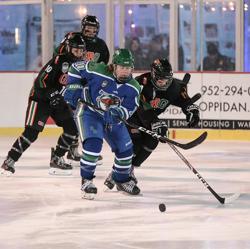 “We stumbled a little bit the past few weeks, and hopefully this rights the ship,” Reid said.

They talked about the recent stretch of games before and after the game, Delianedis said.

“How far we’ve come and how we’ve worked a lot harder this game,” Delianedis said. “We had some tough losses for sure, and I think this game just helped us overcome that.”

His team of talented players is working on a bunch of little things they can do as a team to make themselves better down the road, and they did all those in this game, Reid said.

It started with a pair of short-handed goals, first from Deliandis. Burton scored her first of the game only 9 seconds into a Bears penalty, when she stole the puck at her own blue line and quickly went down the ice for the shorty and a 2-0 Blake lead with 1 minute, 8 seconds left in the first period.

“It’s starting out fast and finishing on your chances,” Burton said.

Burton made it 3-0 in the second period. Then Deliandis and Burton combined for a pair of goals only 46 seconds apart late in the period to take a 5-0 lead. Burton had her hat trick — bringing her season goal total to 21 — when there was still 1 minute, 48 seconds left before the second intermission; a lone hat made it onto the ice surface from an enthusiastic fan.

The game eventually went to running time in the third once the lead went to six goals thanks to a goal from freshman Elizabeth Morrison. With about 6 minutes left in the game, another freshman, Sam Broz, scored on the power play. Then Delianedis got her hat trick with under 3 minutes to play; she leads the team in all three scoring categories, approaching the 50-points mark with 24 goals. It was the third hat trick of the season for her and Burton, both committed to Cornell.

“They’re pretty good,” Reid deadpanned. “Both of them have had a bunch of hat tricks in their careers. We have some players who can really put the puck in the net. It’s nice to see a couple of ninth-graders get goals tonight, too.”

Playing in the atmosphere was “unbelievable,” Burton said, adding that it had all just been building and building.

“And then once we actually got out here today and last night, being able to see the ice and the city in the background, is truly, truly a genuinely dream come true,” Burton said. “I could not have asked for better conditions or a better atmosphere to have been able to play in.” 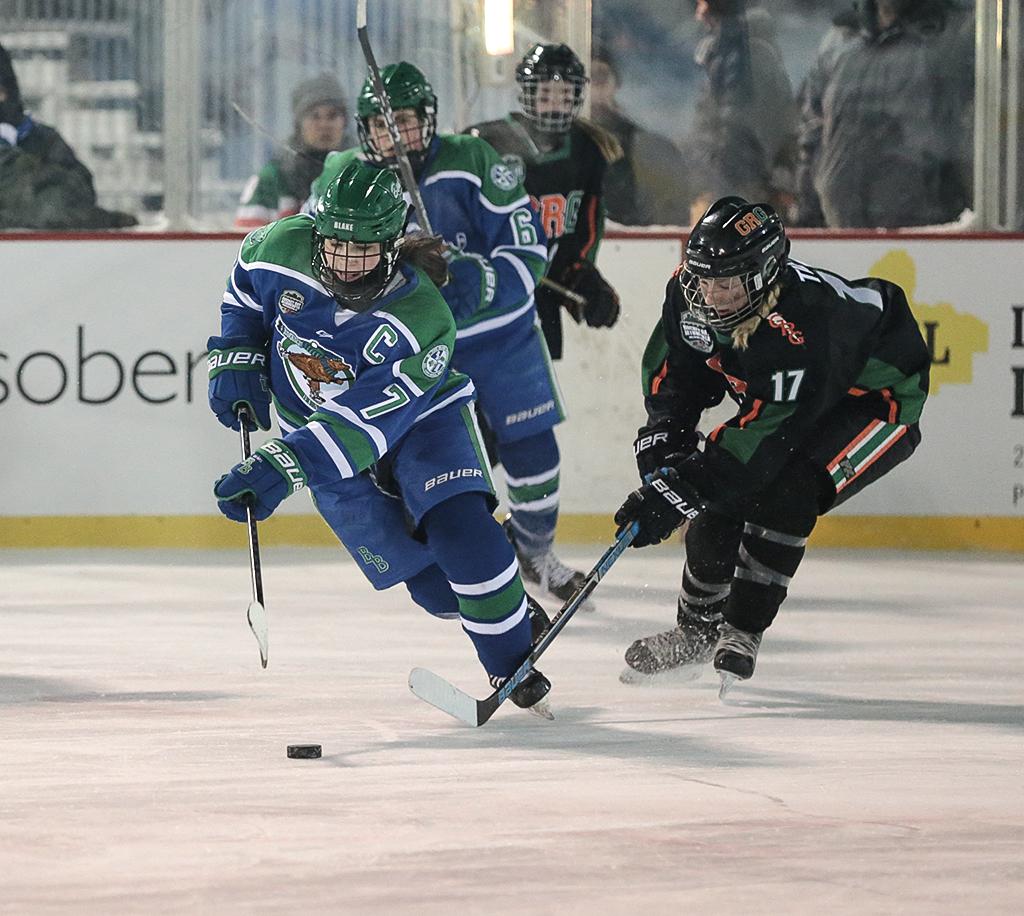 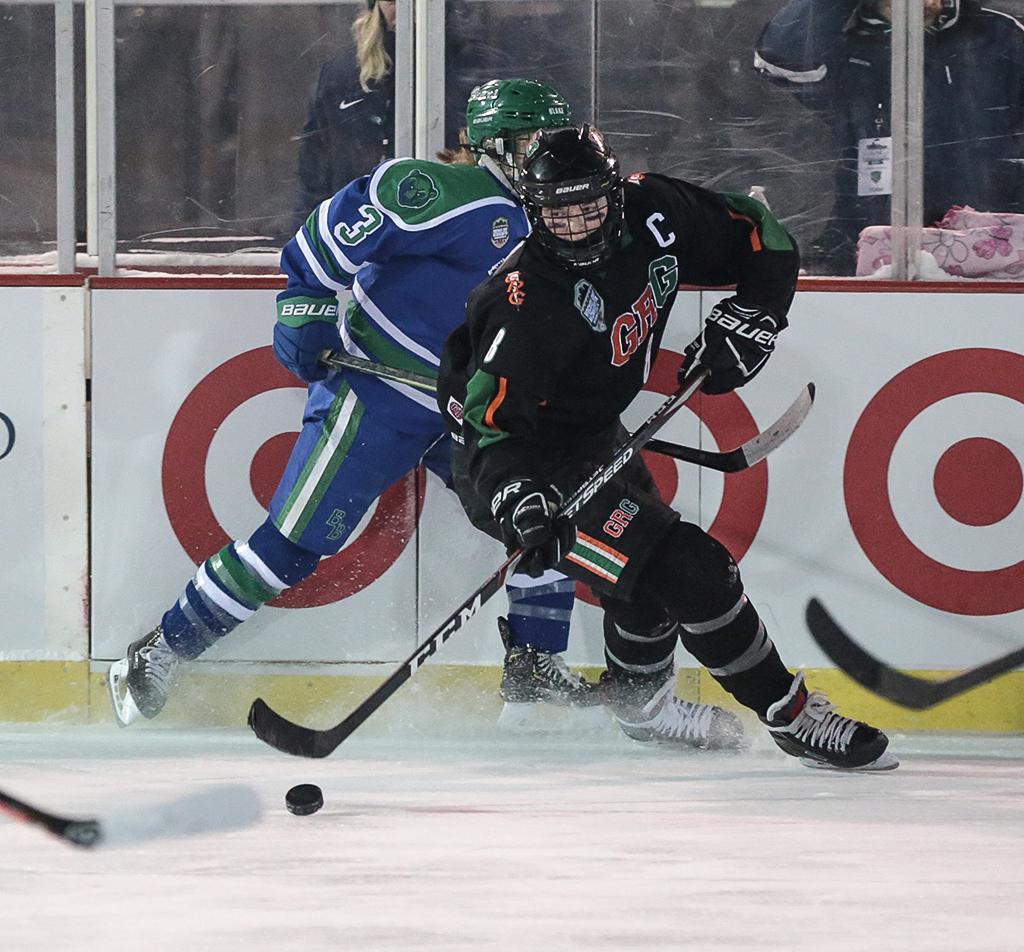 The Lightning's Claire Vekich (8) steals the puck from Kylie Gage (3) at mid-ice. Grand Rapids/Greenway lost 8-0 to the host team Blake in the second game of Hockey Day in Minnesota on Thursday night. Photo by Cheryl A. Myers, SportsEngine