Superior defense and superb goaltending from freshman Sedona Blair fueled the Fire's victory over the Cougars. 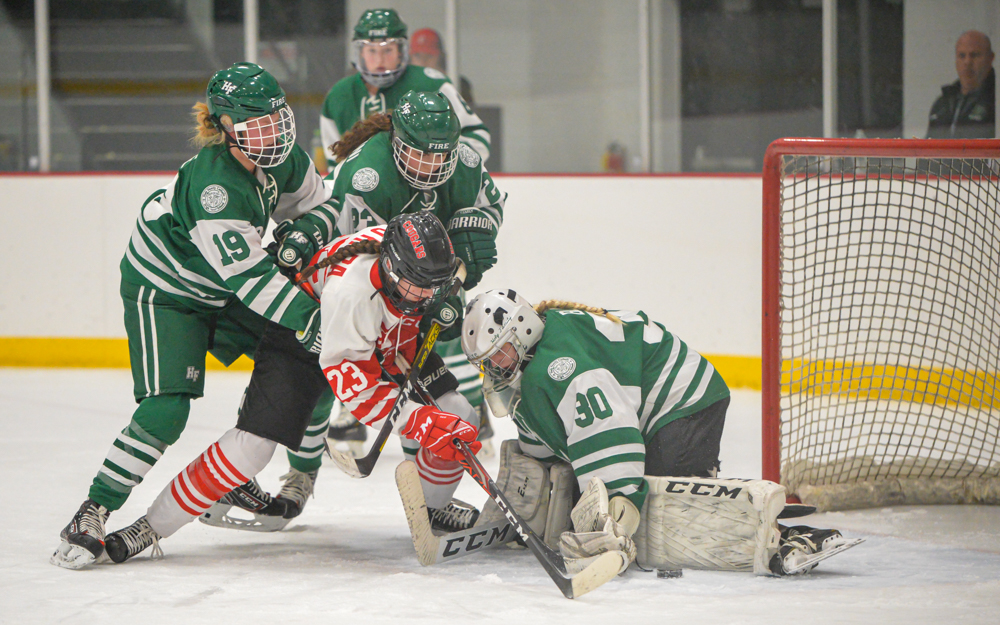 Despite featuring one of the youngest defensive groups in the state, Holy Family Catholic’s defense has been on point all season.

With seven shutouts to the credit of freshman goalie Sedonia Blair, and four to junior goaltender Jillian Oncay, the Fire (20-5-0, 10-0-0) have been a tough nut to crack.

With Blair getting the call to backstop the defense Thursday evening, the Fire were more than up to the task of shutting down Centennial (12-11-1, 7-3-0) in their regular-season finale at Centennial Sports Arena.

“It was emotional for me tonight, as it was our last regular-season game,” said Holy Family Catholic’s Caitlin Rock, a senior forward who had two goals against the Cougars. “I decided to leave it all on the ice for my last game and played like it was my last game ever.” 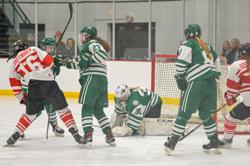 Centennial had control of the puck for most of the first 10 to 12 minutes of the first period, with the Cougars putting five of their nine first-period shots on net before a mistake on Centennial’s part left Fire sophomore defender Libby Kamp alone in front of the Cougars’ net with a shot opportunity.

“Centennial is a tough team and this was a great game for us to play before sections,” said Holy Family Catholic coach Randy Koeppl. “We wanted to win every period and we did that by executing our game plan.”

Carrying the 1-0 lead into the second period, the Fire had another slow stretch in the first couple minutes of the middle period. They played a full-ice game that allowed Centennial several chances to get an odd-man rush going when they caught Holy Family Catholic skaters out of position.

The Fire’s defense held strong, however, and their superior defensive play blossomed into offense for their second goal. Nearly a minute into a Centennial power play midway through the second period, sophomore defender Maeve Kelly made a pass to senior forward Sydney Paulsen, who moved the puck out of the zone with Rock across the ice from her.

“I don’t how far into the kill it was, but I saw Sydney go and I knew it was going to be a two-on-one so I had to get my legs going,” Rock said. “She gave me the best pass I could have asked for. I just got it on the net and hoped that it would work.”

Her shot beat Centennial senior goalie Anna Gilgosch, who finished with 19 saves, clean over the left shoulder for a 2-0 lead.

With the two-goal cushion, Holy Family Catholic was able to lean on its defense for the remainder of the game. Holding the Fire to just eight shots in the second and third periods combined, Centennial’s best chances to make a comeback came during second- and third-period power plays, but neither opportunity resulted in the Cougars beating the Fire defense or Blair.

“We have a strong top four that have stepped up this season,” Rock said. “Us forwards know we have to help the defense out, and we all have Sedona’s back and we know if we play team defense it’s tough to score on us.”

Blair had 17 saves, improving her goals-against average to 1.33 and her save percentage to .944 on the season. She’s now fourth overall in state leaders for GAA and third in save percentage.

Allison Pitlick, a senior forward, has been Centennial’s best scorer throughout the season with 21 tallies and eight assists, but every time she and her linemates were on the ice Thursday, Holy Family Catholic’s defense was at full attention.

“Our top line matched up with their top line, and with the exception of a couple shifts in the first two periods we matched up really well,” Koeppl said. “We kept things on the outside and made sure Sedona didn’t have to make 30 or 35 saves.”

Centennial pulled their goalie with a couple minutes remaining in the third period, and after Fire players had several failed chances at hitting the empty net from afar, which resulted in some icing calls, Rock found the puck on her stick with time winding down to record her second goal of the game.

“Me hitting the net isn’t always a strong suit,” Rock said with a laugh. “Ask anyone on the team. I knew I had to get over the red line to avoid the icing. I just put the puck somewhere near the net and it popped in.” 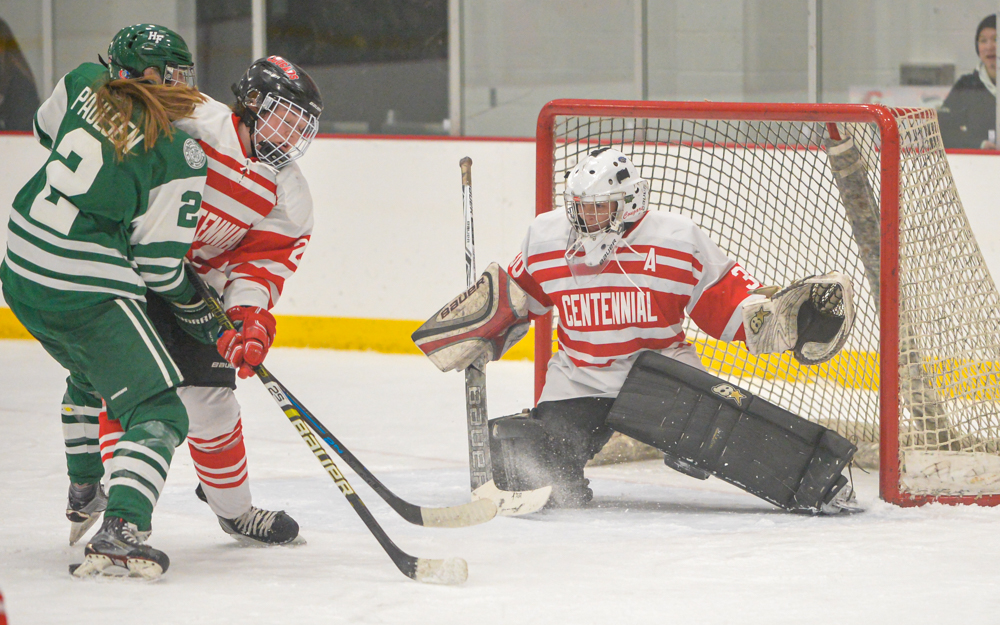 The Fire (20-5-0, 10-0-0) scored in each period, with Kamp’s goal coming in the first, Rock getting her first tally shorthanded in the second, and then she finished the scoring with an empty-net goal with 20 seconds left in the third.

Freshman Sedona Blair backstopped the shutout, her seventh of the season and 13th win, stopping 17 shots for Holy Family Catholic. Senior Anna Gilgosch made 19 saves for the Cougars (12-11-1, 7-3-0).

Centennial was held scoreless in three power-play opportunities while the Fire were kept off the scoreboard on their two extra-skater chances. 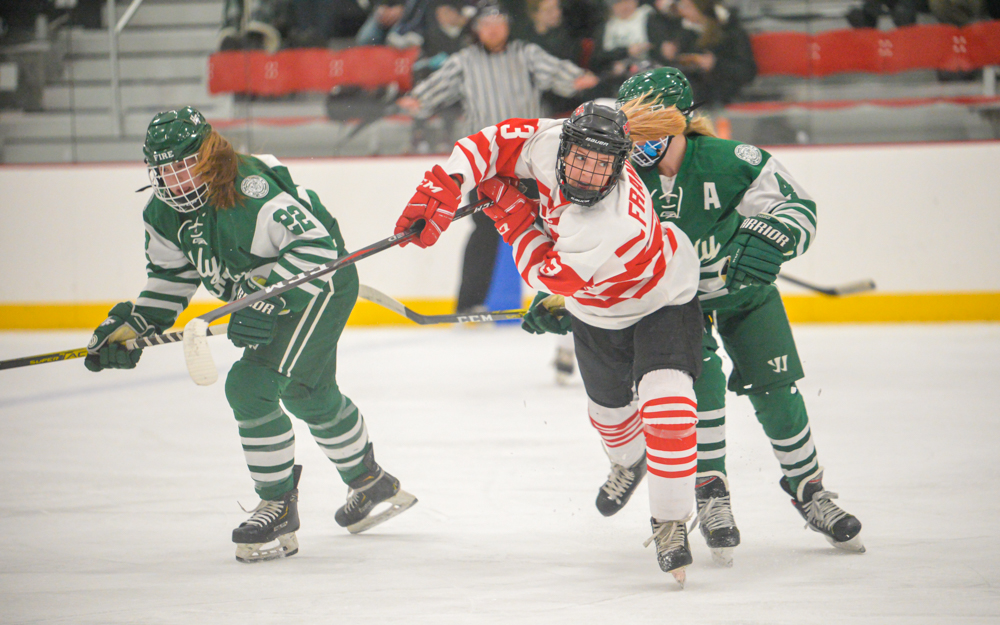 Centennial forward Summer Francis carries the puck past the blue line only to be met by the Fire’s strong defense. Centennial lost to Holy Family Catholic 3-0 at home. Photo by Earl J. Ebensteiner, SportsEngine