Raptors senior Emerald Kelley went through a long and difficult rehab to get back on the ice. 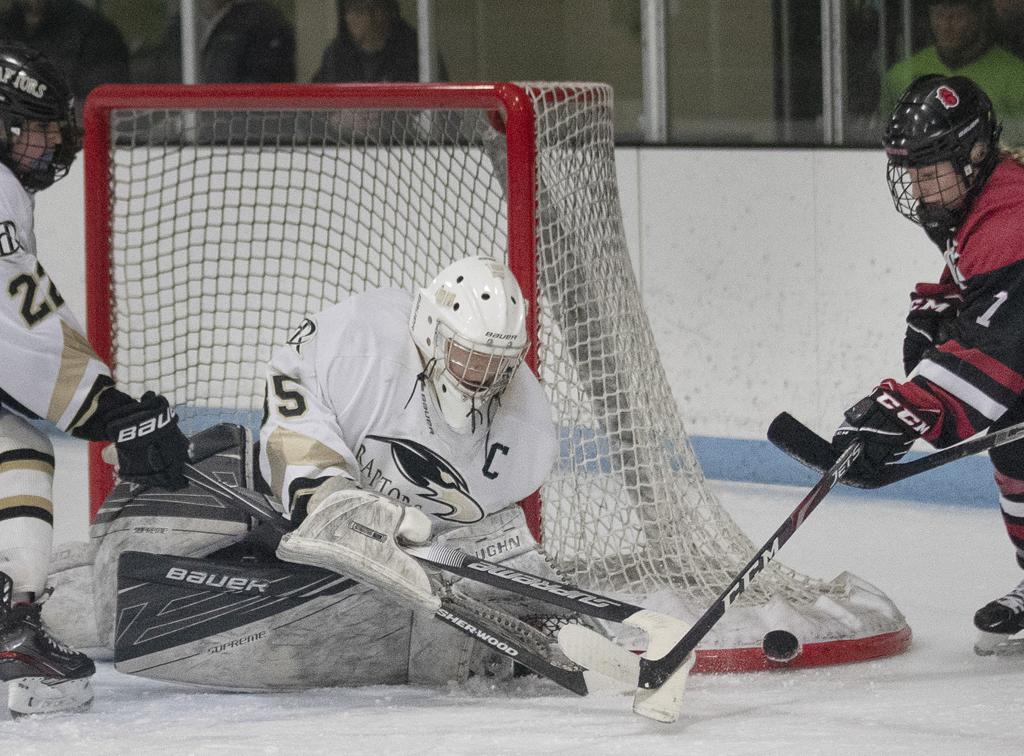 As a senior captain, goaltender Emerald Kelley has started every game for East Ridge girls’ hockey this season. She takes a .919 save percentage into section play. Photo: Jerry Holt • Jerry.Holt@startribune.com

As soon as he walked into the practice arena, Patrick Kelley knew something was wrong with his daughter.

On the far side of the ice Emerald Kelley, the starting goaltender for the Rosemount girls’ hockey team, was in the net taking practice shots from coaches. She wasn’t moving well, and Patrick Kelley could tell she was in pain.

He motioned for Emerald to skate over to him. When she did, he saw tears streaming down her face.

“ ‘I can hardly move,’ ” Patrick remembers her saying.

That was early January 2017. Kelley, a freshman, was helping resurrect a team that went 0-25 the season before. She had already won six games, holding opponents to under three goals a game, and was receiving interest from Division I schools.

Suddenly, she was unsure if she would ever play hockey again.

She and her dad left practice immediately looking for answers. The pain, coming from Kelley’s left hip, became so bad that she struggled to walk and missed the rest of the season.

“My grandma who had 12 knee surgeries was beating me,” she said.

After months of countless magnetic resonance imaging exams and different medical opinions, doctors at Twin Cities Orthopedics determined she had torn her labrum and her hip was impinged.

Doctors laid out her options. Either let it heal by itself and stop playing hockey. Or have surgery and go through a lengthy rehab, with the chance of playing again.

Love affair with the game

Kelley remembers many days watching her brother play and her dad coach and referee. She recalls going to hockey games at Minnesota Duluth, close to where she grew up, wanting to be just like the players. She said there are even pictures of her biting on hockey pucks when she was teething as a baby.

So in the soon-to-be-sophomore’s mind, there was only one option.

“I started skating and playing hockey when I was 4 years old,” she said. “The rink was always home. I could never imagine my life without hockey.”

Kelley had the surgery in late August 2017, causing her to miss her entire sophomore season. She was on crutches for weeks and had to relearn how to walk. She transferred to East Ridge as a sophomore but remained a part of the Irish team as a manager, attending every game and practice.

She finally made it back on the ice for the Raptors’ summer practices in 2018, heading into her junior year.

“The first time I got back on the ice it brought tears to my eyes,” Kelley said. “It felt like I was flying.”

It took a while for Kelley to regain her form. East Ridge coach Kim McClintick, who was entering her first year, remembers being skeptical of Kelley’s prospects.

“Coming in, all I heard was there’s this goalie, but she didn’t play last year. Your first instinct is that can’t be good,” McClintick said.

But as the summer progressed, Kelley continued to get better and eventually earned the starting spot. She started all 29 games her junior year, with a 2.45 goals-against average and a save percentage of .903, propelling East Ridge to a 16-8-1 record.

She also proved instrumental in the Raptors’ first trip to the state tournament, shutting out top-seeded Eagan 2-0 in the section championship.

“That probably wouldn’t have happened without her,” McClintick said. “She played out of our mind. That’s what got us there.”

This year East Ridge has been up and down, heading into the section playoffs with a 12-13 record. The Raptors have won three of their past four games, including a 2-1 overtime victory over sixth-ranked Stillwater. Kelley, a team captain, has been crucial in uniting a team that lost nine seniors from last year. She has started every game, giving up 2.57 goals per game with a .919 save percentage.

“She motivates our team and inspires us to put in a lot of effort to get better,” sophomore defender Allyson Barry said. “My first year I didn’t know a lot of people on the team and she was really warm and welcoming and my first friend on the team.”

Despite missing her sophomore year, widely considered the main college recruitment year, Kelley’s play over the last two seasons has given her a strong chance of playing Division I hockey. She has drawn interest from Northeastern, St. Anselm and RPI.

“The hard part is most people are already committed so teams don’t have a need and for goalies,” Kelley said. “Still, with everything I’ve been through, the opportunity to play college hockey is pretty amazing to me.”