The five honorees were announced on Feb. 6. The winner will be named on Feb. 23 at an awards banquet held at the St. Paul RiverCentre. 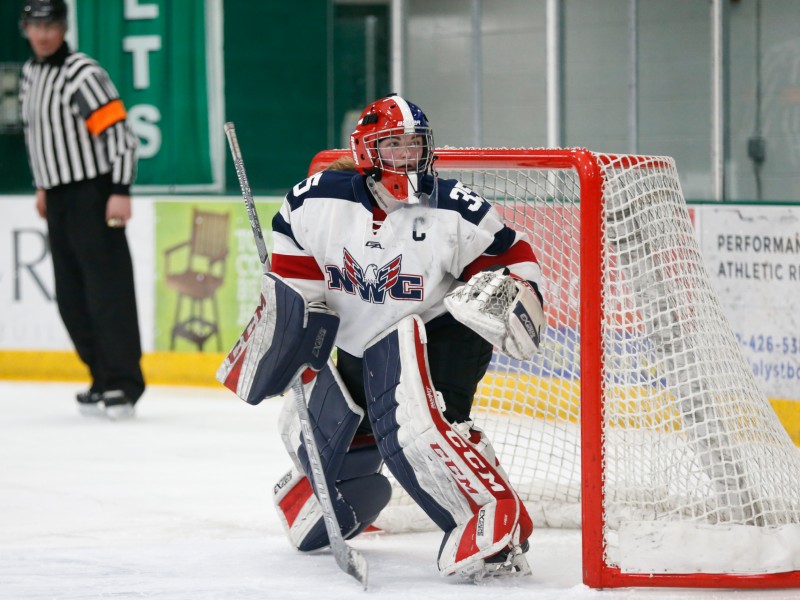 Anna LaRose of North Wright County is one of five finalists chosen for this year's Senior Goalie of the Year award. The winner will be unveiled late this month at an awards banquet in St. Paul. Photo by Jeff Lawler, SportsEngine

Earlier this week Let’s Play Hockey announced its list of 10 semifinalists for the 2020 Senior Goalie of the Year award. Today, the list was trimmed to five finalists.

LaRose, a Maine commit, helped guide North Wright County, ranked No. 8 in the Class 2A coaches’ poll, to a 16-8-1 record in the regular season. With 14 wins, four shutouts and over 1,250 minutes in goal this season, the River Hawks’ backstop posted a .924 save % and 2.06 GAA — impressive numbers, especially when considering LaRose competed in the Lake Conference which boasts three teams ranked in the top five of the big-school poll, with No. 1 Edina, No. 3 Eden Prairie and No. 5 Minnetonka facing the River Hawks two times apiece during the regular season.

Pelkey recorded the most wins of any finalist during the regular season. With her 20 victories, she helped power the No. 2-2A Huskies to a remarkable 22-2 regular-season record with a .931 save %, 1.18 GAA and six shutouts. Allen and Goehner, meanwhile, each earned 19 regular-season wins while Stockinger backed 12 triumphs for Sartell/Sauk Rapids.

The winner, who is chosen the best senior goalie in Minnesota, will be announced upon conclusion of the girls’ hockey season on Feb. 23 at the Ms. Hockey Awards Banquet held in the St. Paul RiverCentre.

White Bear Lake’s Calla Frank, who now plays at Minnesota State Mankato, received Senior Goalie of the Year honors a year ago. As a freshman, Frank has played in 14 games for the Mavericks, posting a .898 save % and 3.04 GAA.

View the table below for more information about each finalist.

2020 Senior Goalie of the Year finalists