Blake leads the list with three of the 10 honorees. The list will be cut to five finalists later in the week. 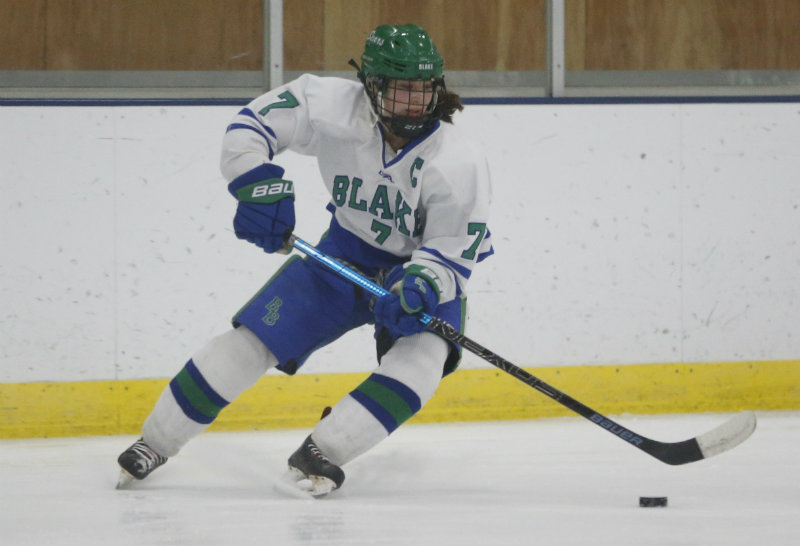 Blake's Lily Delianedis (pictured) is one of three Bears chosen to be a semifinalist for this year's Ms. Hockey award. The finalists will be unveiled later this week. Photo by Jeff Lawler, SportsEngine

In front of a week stuffed with win-or-go-home section playoff matchups, Let’s Play Hockey unveiled its list of 10 semifinalists for this year’s Ms. Hockey award on Monday.

Blake, ranked No. 6 in the Class 2A coaches’ poll from Feb. 6, is the only school with multiple nominees for this year’s award. Deliandeis, a Cornell commit, was the Bears’ leader in goals and points in the regular season, with 41 goals and 68 points. Eight of her regular-season tallies were earned while her team was on the penalty kill. Burton and Wethington were No. 2 and No. 3 in points for Blake in the regular season with 53 and 48 points, respectively.

Each of the honorees is committed to a Division I collegiate program, with seven of them staying in Minnesota. With all but one semifinalist playing the position of forward, offensive stats are aplenty as the group combined to average 31 goals and 30 assists going into this week.

Nicholson, the lone defender, is a Minnesota commit who racked up five goals and 13 regular-season assists for the No. 5-2A Skippers.

Madeline Wethington, a graduate of Blake and Audrey Wethington's sister, was chosen Ms. Hockey a season ago. Madeline Wethington now plays defense for Minnesota. In 31 games with the Gophers, she’s tallied 14 points, including a goal in her first game, and has amassed a +/- rating of +17.

It won’t be long before the list is halved. Five finalists for the award will be announced on Feb. 13, and the winner will be unveiled at the Ms. Hockey Awards Banquet held at the St. Paul RiverCentre in St. Paul on Feb. 23. The Senior Goalie of the Year award, and other honors, will also be presented at the banquet.

Other than on-ice talent, Let’s Play Hockey cites academics, coachability, citizenship, and community and extracurricular activities when choosing the winner, who is deemed to be the state’s top senior player.

View the table below to see more about the semifinalists.