The Skippers doubled their output for the season, scoring twice while killing penalties in a 6-2 section final victory. 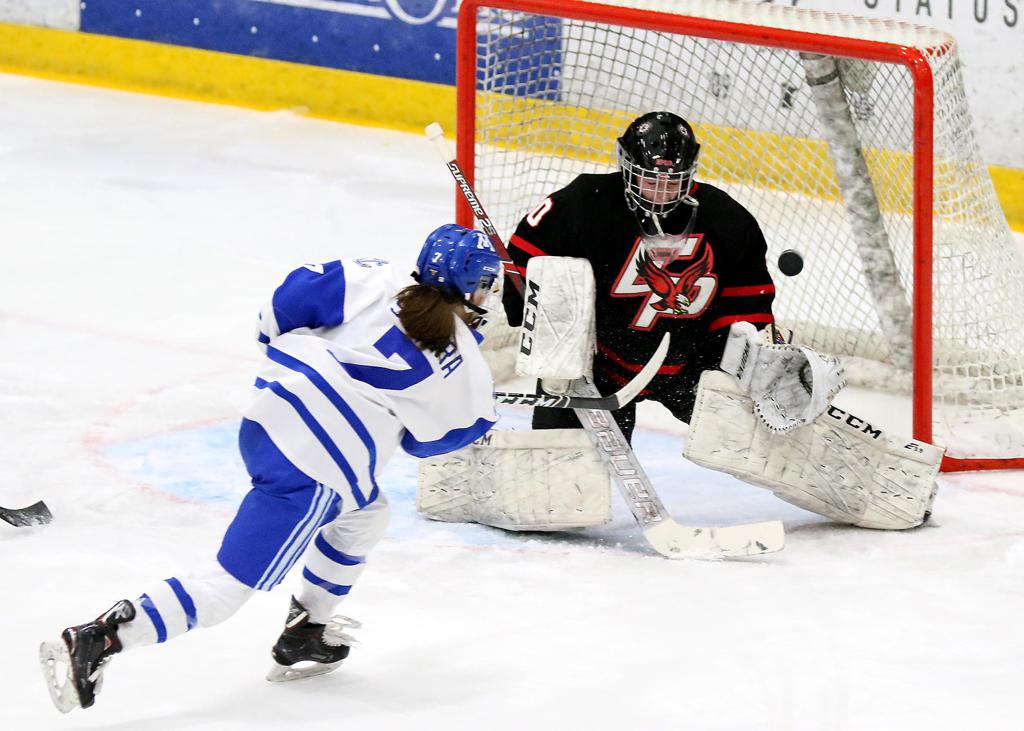 The Minnetonka girls’ hockey team scored two shorthanded goals this season. One game, and the tally is up to four.

The Skippers scored a pair of shorthanded goals, plus one on the power play, in a penalty-filled game to defeat Eden Prairie 6-2 on Friday in the Class 2A, Section 2 championship at Braemar Arena in Edina.

First-year Minnetonka coach Tracy Cassano focused on special teams this week, since the Skippers were facing Eden Prairie for a fourth time.

“We figured if it was a back-and-forth trading penalties that we needed to do our job on special teams,” Cassano said. “The girls did a phenomenal job tonight.”

One of those shorthanded goals came when Maggie Nicholson made a play in the second period, creating a turnover and passing the puck to Lacey Martin, who scored to give the Skippers a 3-2 lead.

“I kind of saw a pattern of them [Eden Prairie] trying to move it to the far side,” said Nicholson, who finished with three assists. “I saw the pass coming, and I, fortunately enough, picked it off.”

Top-seeded and fifth-ranked Minnetonka (21-6-1) got goals from six players to successfully defend its section crown. Defenseman Rory Guilday finished the scoring with the Skippers’ second shorthanded goal. That depth is something that sets Minnetonka apart from other teams across the state, according to Cassano.

“It’s disappointing to have 17 penalties in a championship game,” Eagles coach Jaime Grossman said. “I thought 5-on-5 we absolutely controlled play, and I wish we could have had more 5-on-5 time.”

Minnetonka came into the game against Eden Prairie on Friday with two shorthanded goals this season. By the time it was over, the Skippers doubled their tally.

Special teams came up big as Minnetonka scored two shorthanded goals in a penalty-filled game to defeat Eden Prairie 6-2 in the Class 2A, Section 2 championship at Braemar Arena in Edina.

Top seed and No. 5-ranked Minnetonka got goals from six players to successfully defend its conference crown. The game-winner came shorthanded in the second period when senior Maggie Nicholson intercepted a pass in the Minnetonka zone, drove down the ice and passed to senior Lacey Martin for a 3-2 lead. Nicholson finished the game with three assists.

The Skippers (21-6-1) head back to state for the second straight year and first under their new coach, Tracy Cassano. Minnetonka defeated No. 3-ranked Eden Prairie (20-7-1) in last year’s section championship, 3-1.

Minnetonka won three of four games against its section and Lake Conference rival this season. Before Friday, Eden Prairie had won 11 of 12 games.

It was only the fourth time this season Eagles junior goaltender Molly Goergen had allowed four or more goals, and three of those instances were against Minnetonka.