The Crimson's Lauren Stenslie scored twice, including once into an empty net to seal a 4-2 section final victory. 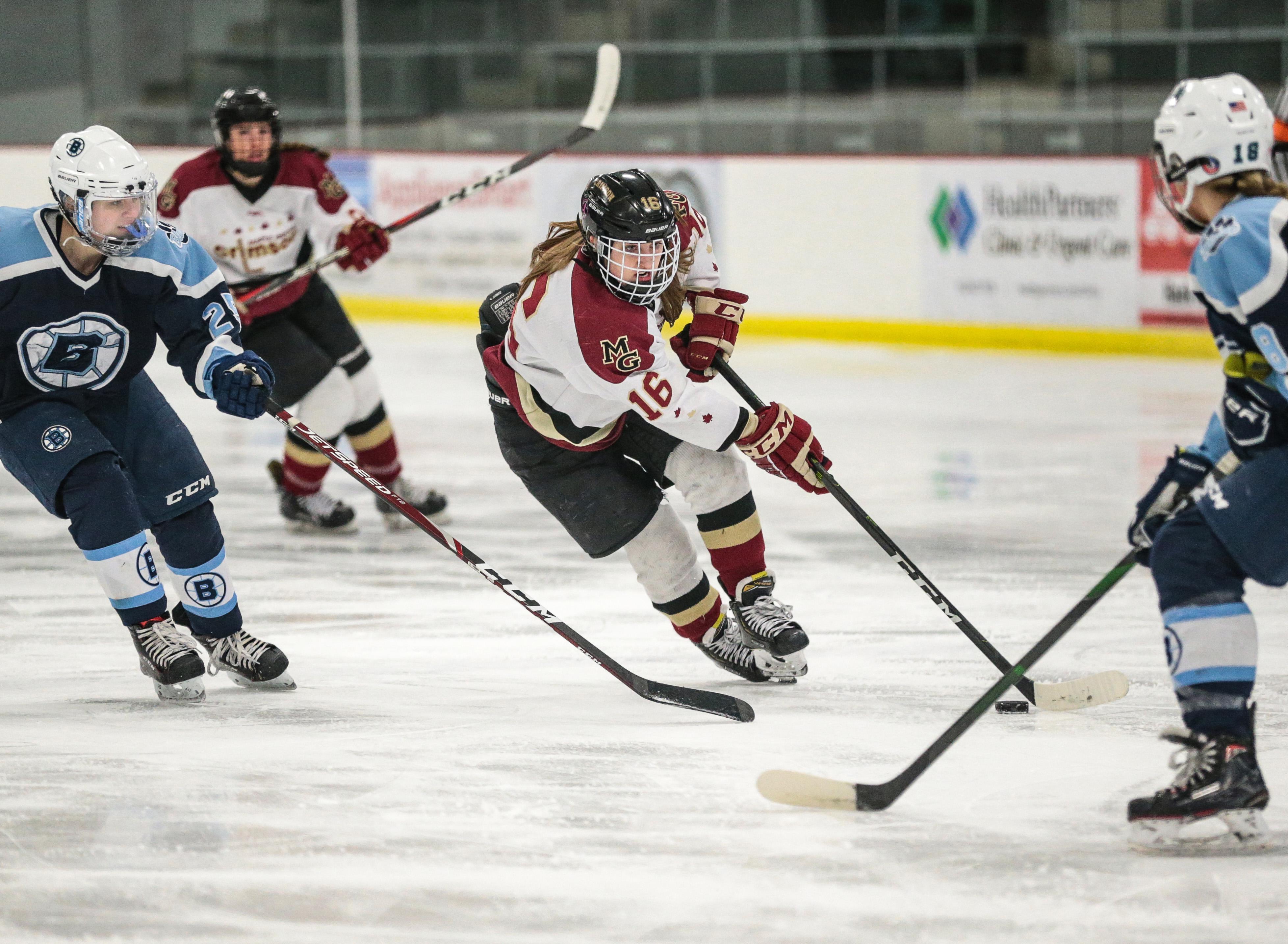 Maple Grove's Lauren Stenslie (16) carries the puck through center ice in the first period. Stenslie scored two goals, including an empty net goal in the last minute of the game to lead the Crimson to a 4-1 win. Photo by Cheryl A. Myers, SportsEngine

Maple Grove scored three unanswered goals after Blaine took an early lead before holding on to defeat the Bengals 4-2 in the Class 2A, Section 5 girls’ hockey championship game at Rose­ville Ice Arena.

Lauren Stenslie scored the first of the three goals, corralling a pass from teammate Chloe Corbin and chipping the puck into the net less than a minute after Blaine took a 1-0 lead. Sam Nordstrom scored the go-ahead goal 18 seconds into the second period, and Brigit Goetsch gave the Crimson a two-goal lead over 15 minutes later.

Stenslie added an empty-netter with 31 seconds remaining in the game, after Blaine had cut the lead to one. 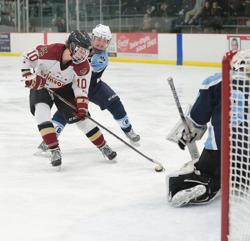 “We played a little tentative to start,” Maple Grove coach Amber Hegland said. “When the puck went in and Blaine was ahead, I think our girls dug their heels in and decided that it was going to be something they were going to have to fight for.”

Stenslie, a junior, said the Crimson (20-6-1) stayed calm after Tess Enlow’s opening goal. She said the team was a “little nervous” after the lead was cut to one late in the game but remained focused.

“We just got going and took it to them,” she said.

Brooke Cassibo made 25 saves for Maple Grove, while Blaine’s Hailey Hansen saved 29 shots for the second-seeded Bengals (16-11). That included two saves on breakaway opportunities for Stenslie late in the third period.

“The third period, I was exceptionally proud of our kids,” Bengals coach Steve Guider said.

Maple Grove scored three unanswered goals, including two in the second period, before holding on to defeat Blaine 4-2 in the Class 2A, Section 5 championship game Friday at Roseville Ice Arena.

Lauren Stenslie, Sam Nordstrom and Brigit Goetsch scored for the top-seeded Crimson (20-6-1), who trailed 1-0 after Blaine's Tess Enlow scored a power-play goal 6:03 into the first period. Stenslie added an empty-net goal with 31 seconds left in the third period to seal the victory. 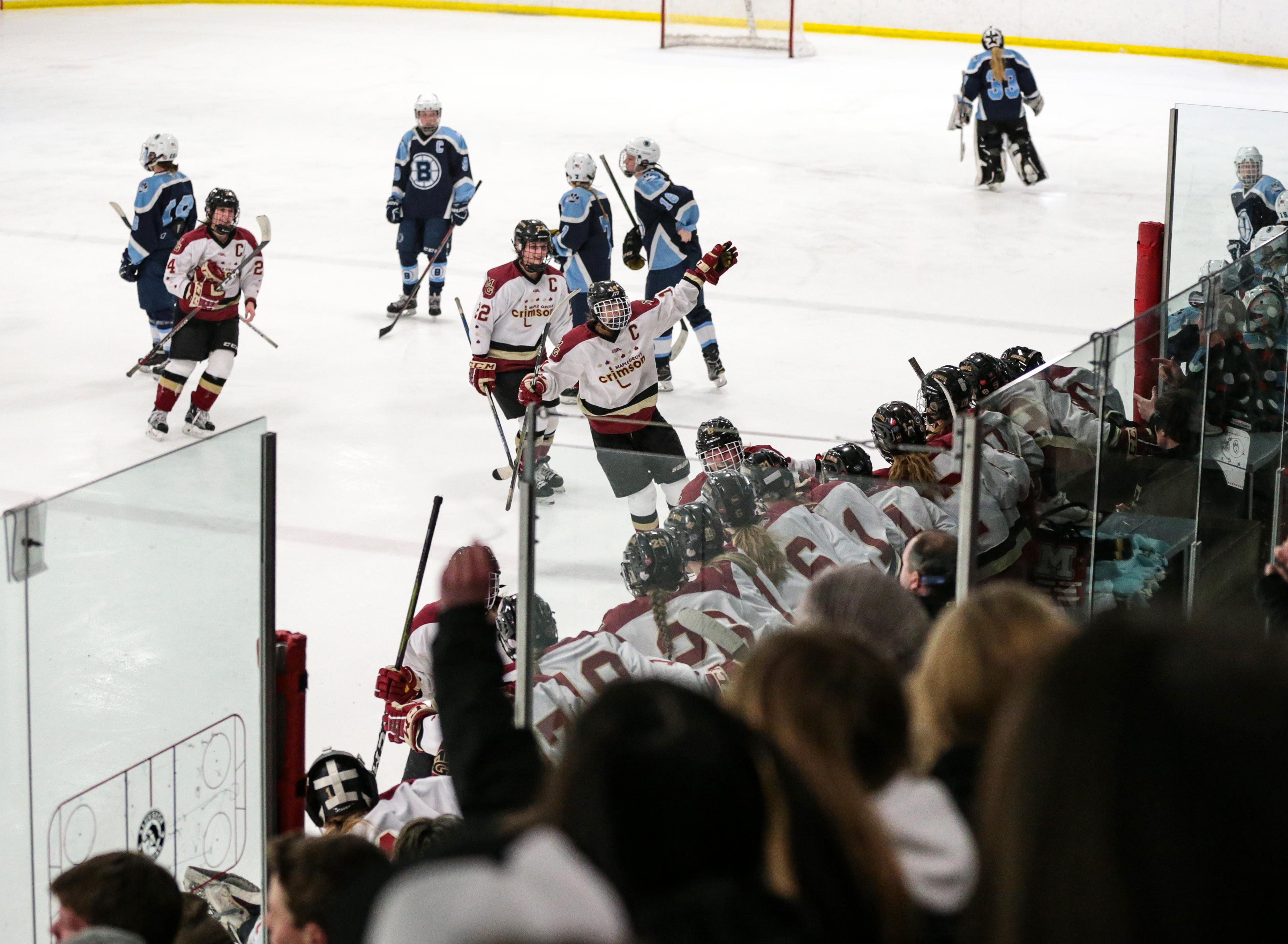