Corneliusen and four others selected finalists for 2020 Ms. Hockey award

Warroad's Hannah Corneliusen, the state's leading scorer with 53 goals, is this year's lone finalist from outside the Twin Cities metro area. The winner will be announced at an awards banquet later this month. 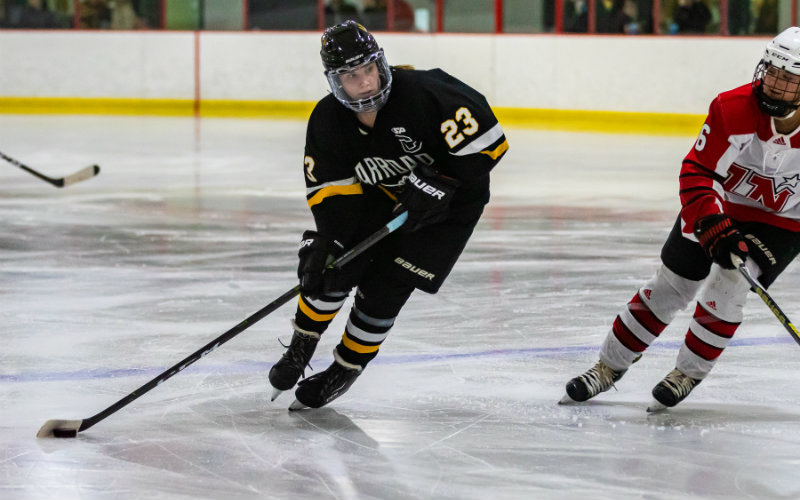 Hannah Corneliusen (No. 23) of Warroad led the state in goals scored through the section playoffs with 53 total tallies. The Merrimack commit is one of five finalists chosen for this year's Ms. Hockey award. Photo by Gary Mukai, SportsEngine

Hannah Corneliusen headlines the list of finalists for this year’s Ms. Hockey award. The five honorees were announced by Let’s Play Hockey yesterday, after 10 semifinalists were unveiled earlier in the week.

Corneliusen, a forward from Warroad, led the state in goals and points during the regular season with 50 goals and 75 points. She struck for three more goals in the Class 1A, Section 8 playoffs, including one in the Warriors’ 4-0 defeat of Thief River Falls on Thursday, a triumph which has the Warriors returning to the state tournament for a fifth consecutive season.

The Merrimack commit is joined by four other finalists for the Ms. Hockey award: Lily Delianedis of Blake; Sydney Langseth of Eden Prairie; Olivia Mobley of Breck; and Maggie Nicholson of Minnetonka.

Delianedis and Mobley play out of the Independent Metro Athletic Conference, and Langseth and Nicholson skate for Lake Conference programs, giving Corneliusen the distinction of being this year’s only honoree who hails from outside the Twin Cities metro area.

Mobley recorded 73 points in the regular season, good for No. 2 in the state behind Corneliusen. With 43 goals and 30 assists tallied, Mobley continued her outburst in the Class 1A, Section 5 tournament, where the forward helped the Mustangs gallop to a third straight state tourney berth with six goals and five assists.

Delianedis impressed this season with 44 goals and 30 assists, including three goals and a trio of helpers in the Class 2A, Section 6 playoffs. Despite her efforts, Delianedis and the Bears were eliminated from postseason contention after suffering a 4-2 semifinal loss to Wayzata. Delianedis recorded a goal and an assist against the Trojans.

Langseth and Nicholson just played against each other in the Class 2A, Section 2 playoffs, where the Eagles and Skippers met in the championship match on Valentine’s Day. Minnetonka defeated Eden Prairie 6-2, with Langseth scoring both goals for the Eagles. Nicholson, meanwhile, racked up three points with a trio of helpers, in addition to earning the postseason hardware and a trip to state. Langseth finished her season with 34 goals and 40 assists, while Nicholson, the only finalist who plays defense, has five goals, 17 assists and she helps pilot a superb Skippers’ defense that gave up just three goals in three section playoff games.

Each of the finalists are committed to continuing their hockey careers for a Division I collegiate program, with two of them staying in state. Langseth is a Minnesota State Mankato signee, while Nicholson is a Minnesota commit.

Presented to the state’s top senior player, the winner will be announced on Feb. 23 at the Ms. Hockey Awards Banquet at the St. Paul RiverCentre, where the Senior Goalie of the Year award and other honors will be given out. The event is presented by Let’s Play Hockey and the Minnesota Wild.

Let’s Play Hockey cites several criteria when considering who receives the award. In addition to on-ice talent, academic record (the finalists combine for a 3.62 grade point average), community and extracurricular activities, coachability, and citizenship are taken into account.

Last year’s Ms. Hockey award recipient, Blake’s Madeline Wethington, now plays defense for Minnesota. She has six goals and eight assists to go with a +/- rating of +17 in 31 games played with the Gophers.

Examine the table below for additional information about the finalists.