But don’t rule out Minnetonka, other coaches say. In Class 1A, defending champ Breck and Warroad could meet for a third straight year in the finals. 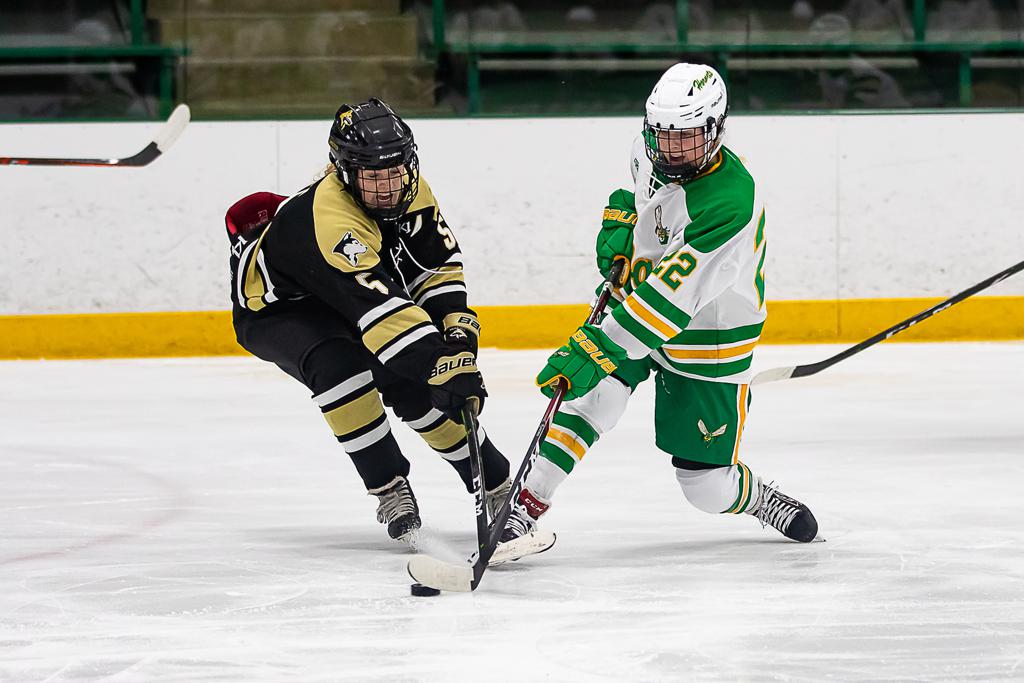 Andover's Peyton Hemp (5) and Edina's Vivian Jungels (22) battled for the puck in the teams' first game of the season on Nov. 7. Andover defeated Edina 1-0. Photos by Gary Mukai, SportsEngine

What box cannot be checked?

Edina, winners of the past three Class 2A championships, is a dynasty in progress. Andover is the only team to defeat the Hornets this season, a 1-0 decision in the season opener.

Edina (26-1) boasts an incredible nine player committed to Division I programs, with a pretty dang impressive seven for Andover (25-2).

Coaches of three programs that faced both Andover and Edina this season agree a Huskies/Hornets title game would showcase the sport’s two best teams this season.

“They are the cream of the crop,” Blaine coach Steve Guider said. “Andover has so much speed and the players’ work ethic is exceptional. They are on a mission right now. Edina plays its systems so well. They are really disciplined, more so than Andover.”

Andover blitzed three Section 7 opponents by a combined 31-0 score. Edina prevailed in the rock-solid Section 6. The Hornets have allowed two goals in a game only twice all season.

Breck coach Steve Persian said, “Edina is a very good defensive team and they’ve got a great goaltender. Offensively, they are three lines deep and all of them are potent. I think their standout forward is Hannah Chorske. She’s really stepped up her game and she works hard at both ends of the ice.”

Chorske’s 30 assists ties her with Vivian Jungels for the team lead. Emma Conner leads the team with 29 goals and Katie Davis (15 goals) fuel what Eden Prairie coach Jaime Grossman hailed as “the best power-play unit in the state. They have four legit scorers and they make you pay. We coach our kids to be one pass ahead. They are two or three passes ahead.”

As for Andover, Persian said, “We beat Andover when we played but I watched them in the section championship game and all I could think was ‘I’m glad we played them when we did.’ Forest Lake played fine but Andover had gone to another level.”

“They didn’t have Hemp when we played them but they play the most consistent team hockey that I’ve seen,” Grossman said.

In goal, Edina freshman Uma Corniea stopped 96 percent of shots faced and allows an average of less than one goal a game. Andover’s Amanda Pelkey, a senior goalie of the year finalist, allows just 1.04 goals per game with a .938 save percentage and nine shutouts.

All of the anticipation for an Edina vs. Andover final comes with a Zamboni-sized caveat — No. 3 seed Minnetonka is capable of defeating both of them.

“I thought Minnetonka was better than Edina,” Guider said.

Grossman added, “Individual skill-wise, Minnetonka might be the most skilled team top to bottom. But they’ve been a little up and down.”

“They are the two best D we saw,” Guider said.Guilday missed her eighth-grade hockey season due to a tumor in her optic nerve behind her eye. A year of chemotherapy shrunk the tumor and she came back. While away, Guilday lifted weights, shot pucks and sharpened her stick handling and skating. Nicholson played for the U.S. Under-18 team the past two years at the world championships, serving as captain and winning the goal medal in January.

Breck, located in Golden Valley, won the past two Class 1A titles at Warroad’s expense. As the top two seeds for the tournament, they are favored to meet again.

Each has a Ms. Hockey finalist —Warroad’s Hannah Corneliusen (53 goals) and Olivia Mobley (a program-record 49 goals) of the Mustangs — who draw the attention.

But each benefits from a great linemate: Warroad’s Genevieve Hendrickson (45 assists) and Breck’s Ally Qualley (a program record 53 assists). Coincidentally, Corneliusen and Qualley will play in college together at Merrimack.

Farmington lost standout sophomore forward Claire Enright to an injury before the playoffs. But the Tigers pressed on. Players such as Jayden Seifert, Sam Moehle and Sadie Long picked up the scoring slack in the playoffs. And goalie Ryleigh Furlong posted two shutouts.

Tourney tickets, how to watch