The Crimson scored twice in the third period, going ahead on junior Tristana Tatur's second goal of the game, to advance to the Class 2A semifinals. 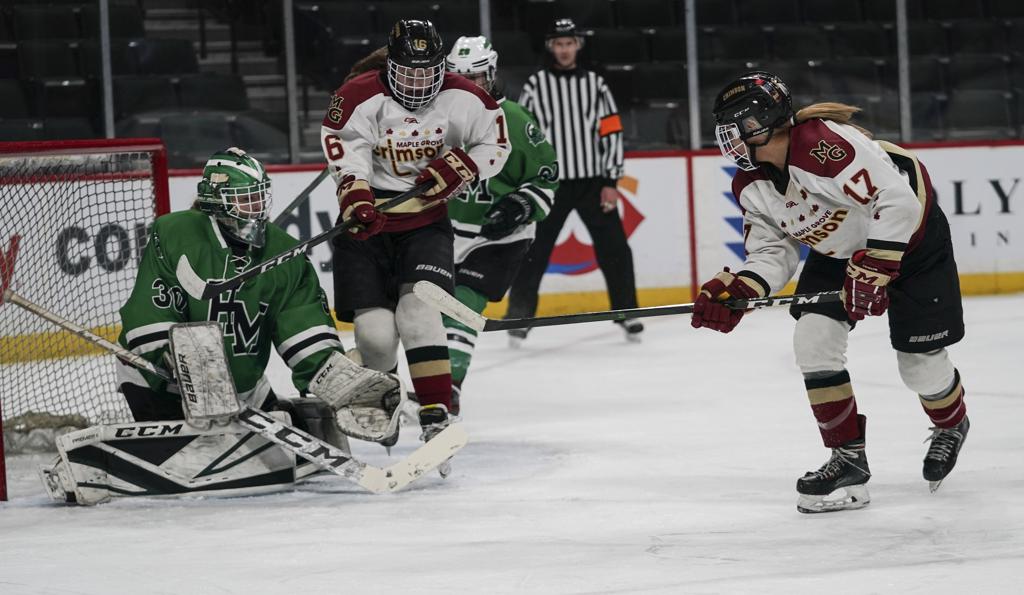 Trailing 2-1 heading into the third period against Hill-Murray, Maple Grove didn’t have to look hard for inspiration.

Earlier in the season, Maple Grove defeated Hill-Murray 3-0, scoring three goals in the final six minutes of the game.

So while the Crimson trailed Thursday in the Class 2A quarterfinal at Xcel Energy Center, a sense of familiarity set in.

“We just said, ‘Keep our heads up, we are still in this game,’ ” junior forward Tristana Tatur said.

Six minutes into the final period, Maple Grove junior Sam Stelljes scored to tie the game. Then with four minutes left in the game, Tatur scored her second goal of the game to lift Maple Grove to a 3-2 victory over Hill-Murray.

"I knew the goalie is really big, so I had to get her down,” Tatur said of her game-winner. “Once she got down, I just threw it up top.”

It was the fitting final goal of a topsy-turvy game. Tatur opened the scoring midway through the second period. But within six minutes, Hill-Murray was leading thanks to goals from senior Nina Steigauf and sophomore Olivia Boyer.

“After the first goal it was for sure a wake-up call,” Steigauf said.

However, the Hill-Murray run ultimately re-energized the Crimson as well, Maple Grove coach Amber Hegland said. Maple Grove will play No. 1-seeded Edina in the semifinals on Friday at 8:30 p.m.

“I think it comes down to our grit and our desire to want to move forward in the championship bracket and get to play (Friday) night than (Friday) morning,” Hegland said.

The last Class 2A quarterfinal  game presented Hill-Murray with a change for revenge against Maple Grove.

Fresh on the Pioneers' minds was a 11 3-0 loss to Maple Grove on Jan. 11 that started a stretch of three losses in five regular season games. Thursday’s matchup was the chance to better the Crimson in a game with higher stakes at Xcel Energy Center.

But Maple Grove got the best of the Pioneers for the second time this season, scoring two goals in the third period for a 3-2 victory to advance to the semifinals against No. 1-seeded Edina.

Defense dominated the first period. Neither team scored and the teams combined for just eight shots on goal. Ten minutes into the second period, Maple Grove ended the scoreless tie with a goal from junior Tristana Tatur.

But like Maple Grove, Hill-Murray couldn’t keep the lead, either. Midway through the third period, Crimson junior Sam Stelljes tied the game once more. Then, with just four minutes left in the period, Tatur scored her second of the game to put Maple Grove up 3-2.