Wednesday dispatches from the X: Warroad coach asks for defense before it's too late

“We call it ‘Sunday night open hockey defense,’ ” Dave Marvin said jokingly before turning serious about tightening up ''leaky'' play. Plus a goalie sisterhood and learning from losing. 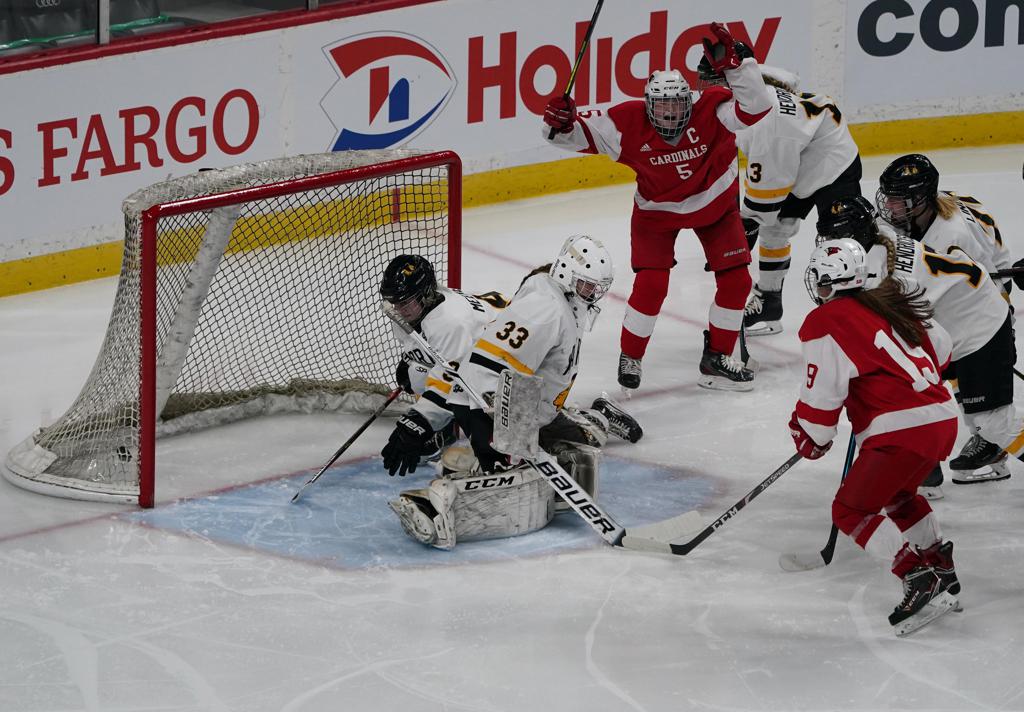 Dave Marvin, coaching Warroad for the 10th time at the state tournament, took offense to the Warriors’ defensive performance Wednesday.

He used the word “leaky” to describe his defense, a vexing question he’s been unable to answer in the last month.

“We call it ‘Sunday night open hockey defense,’ ” Marvin said jokingly, before turning serious and adding, “That’s what we’ve been playing lately and it’s not going to fly moving forward.”

Warroad’s 7-4 victory against Willmar marked the first time a Marvin-led team won a state tournament game despite allowing four or more goals. The Warriors were 0-6 in such games previously.

With that in mind, Marvin warned his team.

“We have to be better defensively,” Marvin said. “If we don’t, we won’t make it to Saturday. That’s our message.”

Cloquet-Esko-Carlton goaltenders Lauren Maslowski and Araya Kiminski shared a moment of congratulations while skating away from the postgame handshake line.

Maslowski, a senior, wrapped the freshman Kiminski in a hug from behind to acknowledge the youngster’s 2-0 shutout of Hutchinson.

“She just told me how proud of me she was and how she loved me,” Kiminski said. “She’s always supporting me in everything.”

“It’s amazing that she can be that happy for me to be starting over her,” Kiminski said. “It makes me so happy that we can have this close of a bond on and off the ice.”

Luverne coach Tony Sandbulte sat at the podium for the postgame news conference after his team’s 8-1 loss to the Breck with a bemused smile on his face.

He knew that his team was a decided underdog going into Wednesday’s quarterfinal, so he had kept his expectations reasonable. He was satisfied that his team got state tournament exposure, played on Xcel Energy Center ice and got the chance to experience girls’ hockey at a high level.

“We don’t see that every day,” Sandbulte said. “We just want to make sure the girls are enjoying the experience, learning to be better hockey players and seeing the work that we still have to put into it.”

The Cardinals did reach one of their goals. Trailing 8-0 in the third period, they set a goal to win the period. With a nod to Breck’s unwillingness to add to its onslaught, Luverne did, getting the only goal of the period.

“That was a gracious move by Breck, but we said we wanted to score a goal and win the period,” Sandbulte said. “And we can say we did.”