The Lumberjacks broke a 2-2 tie with a "please go in'' bouncing goal in the third period en route to a 5-3 victory and a spot in the Class 1A championship game. 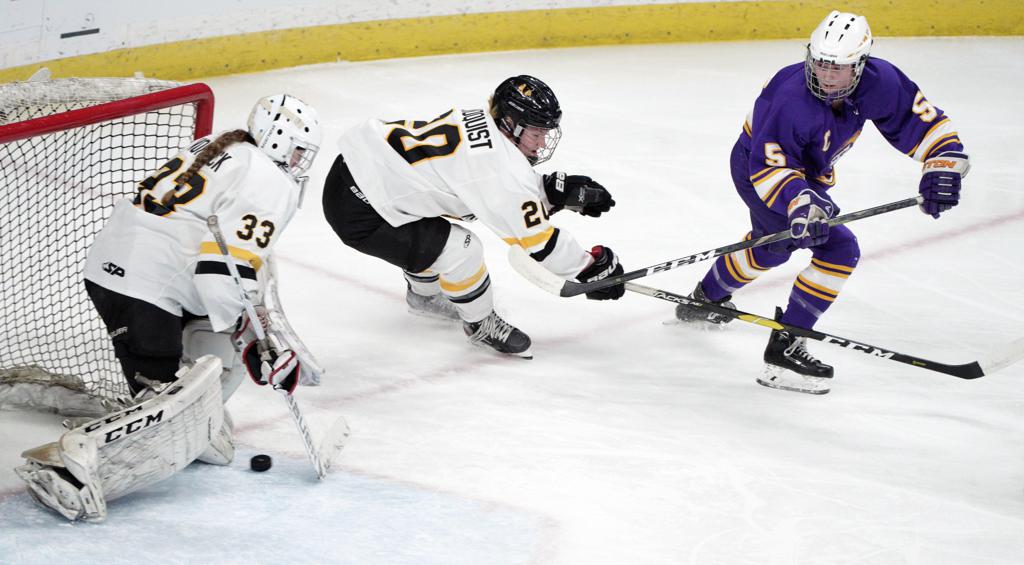 Cloquet's Taylor Nelson slips the puck past Cal Lindquist and under the pads of Warroad goalie CJ Lanctot to score her first of three goals in the game. Photo: Brian Peterson * brian.peterson@startribune.com

With the score tied 3-3 and 14 minutes left to play, Cloquet-Esko-Carlton senior forward Kiana Bender skated with the puck into Warroad’s zone. Bender threw a shot toward the net that flew high and wide right above the goal.

Immediate feelings of disappointment were supplanted by sudden shock. The seemingly innocent shot took a perfect Lumberjack bounce, falling into the back of Warroad goaltender Kendra Nordlock and into the goal.

The go-ahead goal proved to be the game-winner Friday for No. 3-seeded Cloquet-Esko-Carlton as it defeated No. 2 seed Warroad 5-3 in a Class 1A semifinal at Xcel Energy Center.

“When I saw it jump up and trickle over, I was like ‘please go in, please go in,’ ” Bender said. “I was really excited.”

Warroad overcame deficits of 2-0 and 3-2 earlier in the game, but couldn’t regroup after Bender’s bouncing goal.

“That was a backbreaker there,” Warroad coach David Marvin said. “That’s an NHL bounce, you don’t see that one in normal rinks.”

Two minutes later, Bender got the benefit of another deflection as a Lumberjack shot redirected off her elbow and into the net to give the team some much needed breathing room.

“I didn’t even see it go in. I just saw my teammates put their arms up and cheer,” Bender said.

Senior Taylor Nelson scored the first three goals for the Lumberjacks before assisting on both of Bender’s goals. She now has 47 goals this season.

Cloquet-Esko-Carlton will play in the state championship for the first time 2005.

“We’re sort of the underdog Cinderella type story,” Cloquet-Esko-Carlton coach Courtney Olin said. “We just got to believe in ourselves regardless of who we’re playing.”

A third-period scoring frenzy catapulted No. 3-seeded Cloquet-Esko-Carlton to a 5-3 semifinal victory over No. 2 Warroad on Friday at Xcel Energy Center.

Entering the final period with the score tied 2-2, the Lumberjacks struck first with senior Taylor Nelson scoring her third goal of the game two minutes into the period.

The lead lasted all of eight seconds. Off the ensuing faceoff, Warroad senior Hannah Corneliusen sliced through the Lumberjack defense and fired a shot past sophomore goaltender Kendra Nordlock to tie the game 3-3.

Not two minutes later, the frenzy continued. Cloquet-Esko-Carlton senior forward Kiana Bender took an errant shot that went over the net and deflected off the glass directly behind the Warroad goal. However, seemingly with a mind of its own, the puck bounced directly off Nordlock’s back and into the net.

Bender created much needed separation two minutes after that, scoring to extend the Lumberjack lead to a two-goal margin at 5-3.

Along with her hat trick, Nelson also assisted on both of Bender’s goals.

Cloquet-Esko-Carlton awaits the winner of the semifinal featuring Breck vs. Rochester Lourdes to play Saturday in the Class 1A championship game.