The Huskies defeated Minnetonka 4-3 just 18 seconds into the extra session after tying the game with a goal in the final minute of the third period. 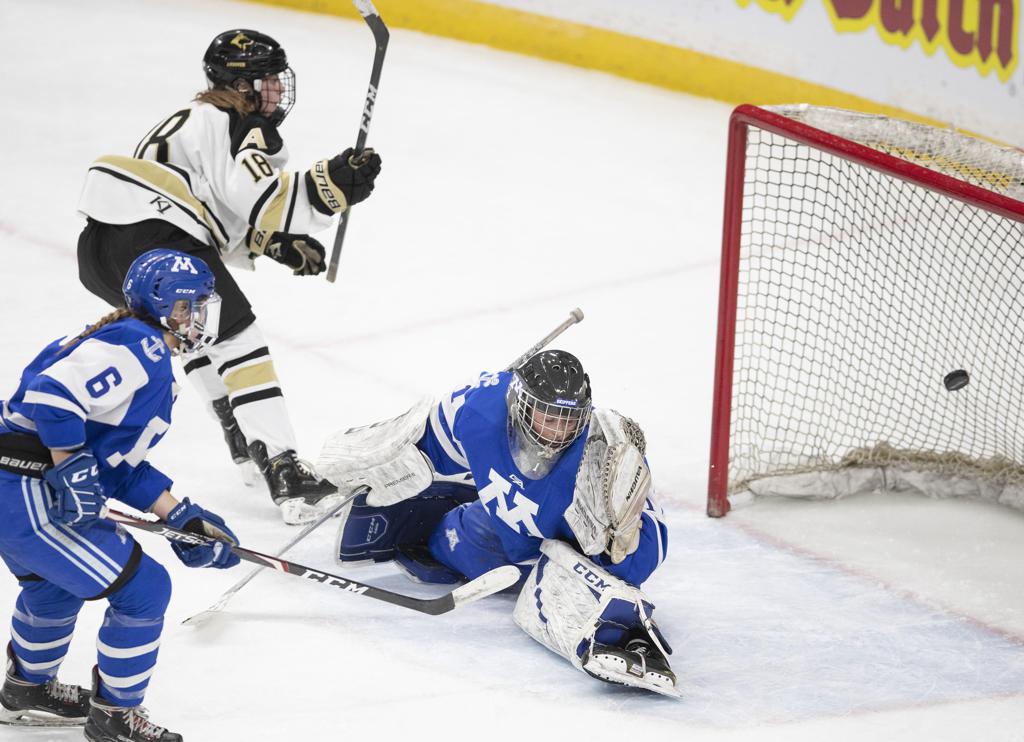 Andover forward Gabby Krause didn’t have the past on her mind as her team prepared for overtime in the state tournament semifinals for a second consecutive season.

Heartbreak visited the Huskies just 10 seconds into the extra frame a year ago. Things happened fast again Friday, but this time, Krause scored with only 18 seconds gone.

The resulting 4-3 victory sent the program to its first state title game.

“We just kept our minds on going forward and executing,” Krause said.

No. 2 seed Andover (27-2), able to coast through the final period in four consecutive postseason blowouts, needed a comeback to survive the Skippers.

The dogged Huskies received two Peyton Hemp goals in the final period, the second one with 42 seconds left in regulation. The team expects that kind of toughness from “The Brick,” Hemp’s nickname.

“She is a very determined and driven player,” Huskies coach Melissa Volk said. “In big situations like that, that’s when your big players step up.”

No. 3 seed Minnetonka (22-7-1) went ahead 3-2 on Hanna Baskin’s goal with 2:03 to play in the third period. She buried a rebound of Lisa LaRoche’s shot from the blue line. Video review confirmed LaRoche kept the puck in the zone by mere inches.

Hemp answered with a power-play goal and Andover goalie Amanda Pelkey on the bench for an extra skater.
“Once she scored, we had all of the momentum and that just led into overtime,” Krause said.

Skippers coach Tracy Cassano said, “It’s disappointing, obviously, because you’re two minutes away from victory and going to the championship game and then all of a sudden, you’re put in a position where you’re trying to kill 6-on-4 and you come up a little bit short.”

“We made two mistakes, unfortunately, on the first shift of overtime and they capitalized,” Cassano said.

Able to coast through the final period in the four consecutive postseason blowouts, Andover needed a comeback to survive the Skippers.

The dogged Huskies got two third-period goals from Peyton Hemp, the second one with 42 seconds remaining in regulation.

No. 2 seed Andover (27-2) advances to Saturday’s Class 2A state tournament title game. The Huskies await the winner of Edina vs. Maple Grove in the second semifinal Friday at Xcel Energy Center.

No. 3 seed Minnetonka (22-7-1) went ahead 3-2 on Hanna Baskin’s rebound goal with 2:03 to play in the third period. She finished what Lisa LaRoche started with a shot from the blue line. Video review confirmed LaRoche kept the puck in the zone by mere inches.