Thursday dispatches from the X: Minnetonka seeks to avenge earlier loss to Andover

“This is going to be a completely different game,” Skippers coach Tracy Cassano said. Plus Farmington culture, a student fan shortage and Maple Grove's challenge. 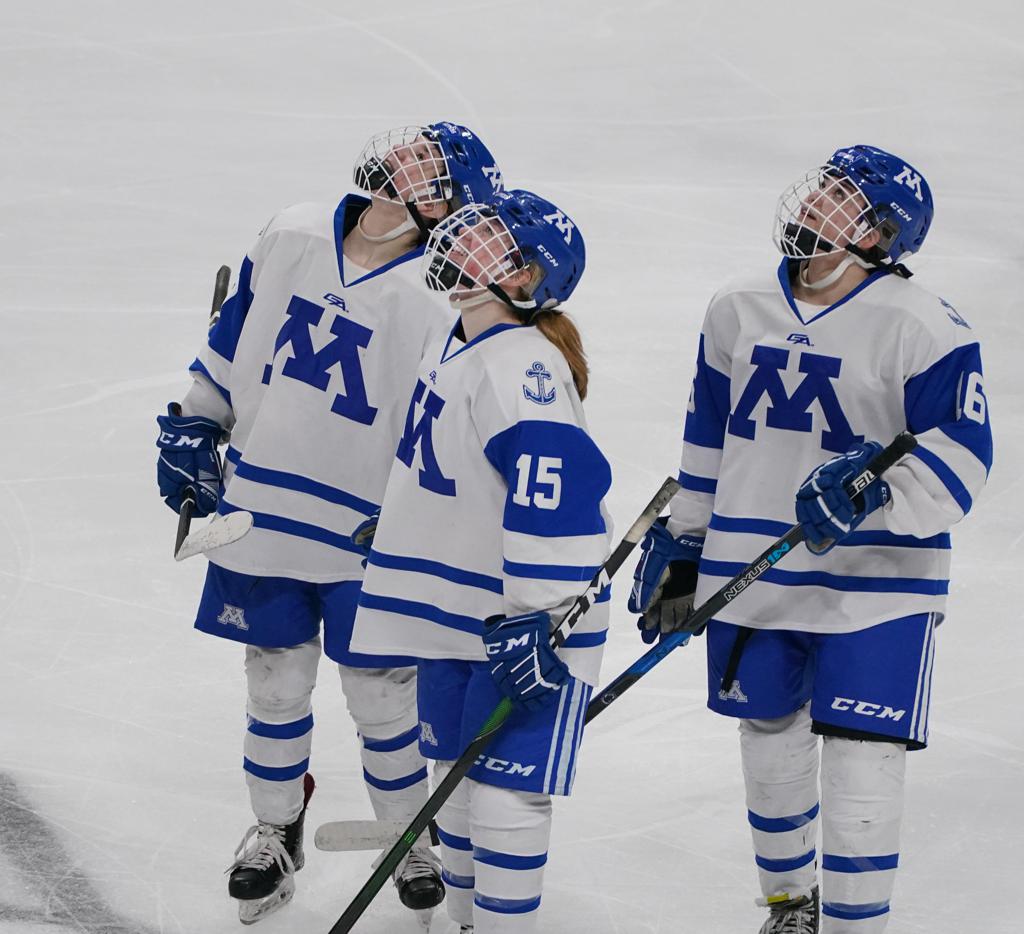 Sure, the Skippers had to defeat Roseau first before entertaining any revenge fantasies. Once victorious, however, players and coaches began focusing on Andover — their opponent in Friday’s Class 2A semifinals. Back in November, the Huskies visited Pagel Arena and defeated their hosts 3-1.

On Thursday, Skippers coach Tracy Cassano gave credit where it was due.

“I thought they came out with an A-game, and I thought we came out with a C-minus game,” said Cassano, whose team got outshot 42-12 by Andover. “We did not play well. A lot of spectating on our part.

“This is going to be a completely different game.”

Farmington’s third Class 2A state tournament appearance in four years didn’t start as planned — the Tigers lost 6-0 to Andover. But to coach Jon Holmes, an alum of the school, the future looks brighter each time the Tigers reach St. Paul.

“Farmington is a hockey community, and this is good for the culture,” Holmes said. “… Our numbers are phenomenal for girls’ hockey. You have four U8 teams and almost three U10 teams, so coming back annually is huge.”

He is equally excited about the future of his team. Farmington loses only two seniors from the current roster.

While Edina’s players had no trouble mustering up energy for their quarterfinal matchup, the same couldn’t be said about their student section.

Edina was outnumbered roughly three-to-one by the Burnsville crowd, a showing the Hornets called disappointing.

Edina coach Sami Reber said it was important to note that the boys’ team was playing in their section quarterfinal at the same time. Burnsville, in a similar scenario with its boys’ team hosting Park of Cottage Grove, didn’t have the same issue.

“Not seeing a student section, you kind of got to get up your own energy,” Edina junior Emma Conner said.

The ultra-physical style that Maple Grove played in Thursday’s win against Hill-Murray won’t be the same strategy the Crimson employs against top-seeded Edina in the second semifinal on Friday.

Their main concern? Edina freshman goaltender Uma Corniea. In the regular season, Corniea led the state in wins (20), goals-against average (0.62) and save percentage (.970). Edina defeated Maple Grove twice during the regular season, outscoring it 7-2 in those matchups.

“If we get a puck by her, we might ask to keep it,” Maple Grove coach Amber Hegland said.