Gabby Krause scored her second goal of the game with four minutes left to break a 3-3 tie that had stood since early in the second period. 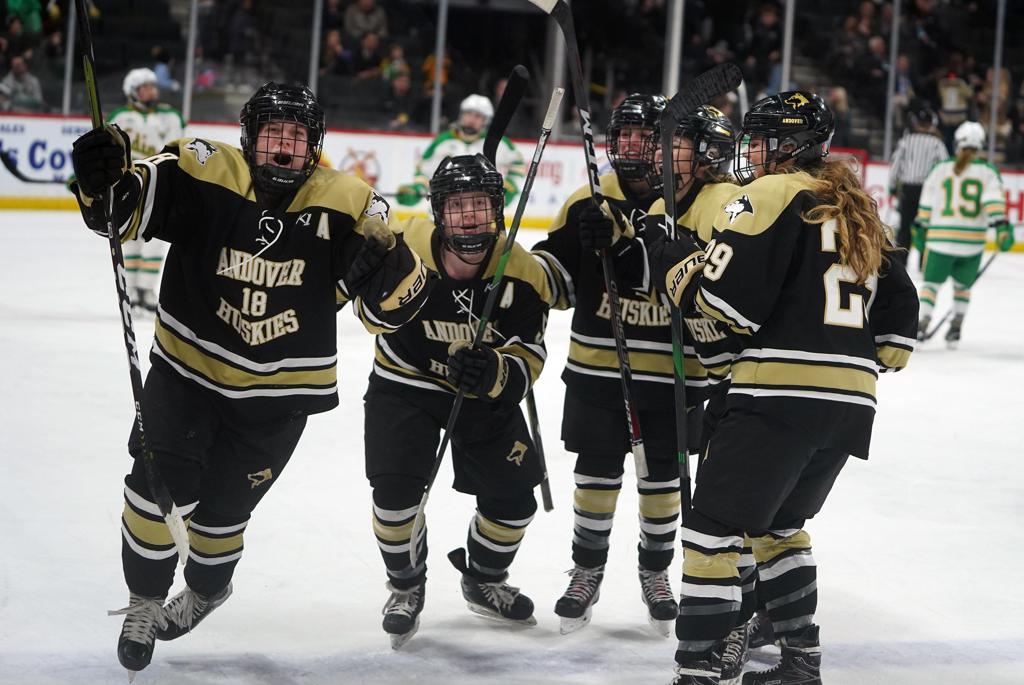 Gabby Krause (18) of Andover celebrates with teammates after scoring the Huskies' first goal against Edina. Krause broke a 3-3 tie with a go-ahead goal in the third period. Photo: RICHARD TSONG-TAATARII ¥ richard.tsong-taatarii@startribune.com

As if the anti-cake eater set needed any more reason to dislike Edina, last week ESPN named it the center of the hockey universe in the United States.

The top-ranked Hornets’ girls’ program certainly did its part, winning the past three Class 2A state tournament championships. Standing in the way of an unprecedented fourth consecutive title Saturday was Andover, a worthy challenger that defeated Edina once earlier this season and last season.

A 5-3 victory upheld the Huskies’ reputation in a game at Xcel Energy Center that justified the hype.

No. 2 seed Andover (28-2) fought back from deficits of 2-0 and 3-2. The Huskies’ first lead came as Jamie Nelson passed to Gabby Krause, who scored with less than four minutes remaining in the third period.

“For us to achieve this goal is a huge accomplishment,” Andover coach Melissa Volk said. “We’re definitely resilient. We’re mentally tough, we’re confident and we believe in each other.”

No. 1 seed Edina (28-2), the ultimate truth machine, tested Andover throughout. Both teams received a 5-on-3 advantage in the first period. The Hornets cashed in with power-play goals from Emma Conner and Katie Davis.

“We were definitely a little irritated, but we used that fuel in a positive way to go even harder,” Volk said.

“Against a team like Andover, you can never let up,” Reber said. “Ever.”

Krause scored and assisted on Peyton Hemp’s tying goal before the period ended.

Corniea, who won the previous two Class 1A state tournament championships with Breck, entered the title game having stopped all 35 shots faced in her first two tournament games.

“We knew Uma is one of the best goalies in the state, so we had to be really hard on her and get in front of her eyes and get rebounds,” Hemp said. “Once we did that and scored a couple goals, we were confident.”

Then Nelson found Krause, who for a second consecutive night tallied the game-winning goal.

Even after a loss, Reber took solace in the bigger picture. The state’s top two teams, and their combined 16 players who have made Division I college commitments, showcased the best the sport can offer.

“I’m really happy it was a back-and-forth game just for the crowd and girls’ hockey in general,” Reber said. “I think that was exactly the type of game people wanted to see.”

The Huskies fell behind 2-0 and 3-2 on Saturday at Xcel Energy Center and came back each time.

Gabby Krause scored twice, including the game-winning goal with less than four minutes to play. The Huskies added an open-net goal in the final seconds.