Saturday dispatches from the X: Breck's dominance raises question of rising up to 2A

The Mustangs have outscored their opponents 57-7 during its run of three state titles. Plus record performance, third-place and consolation games and record attendance. 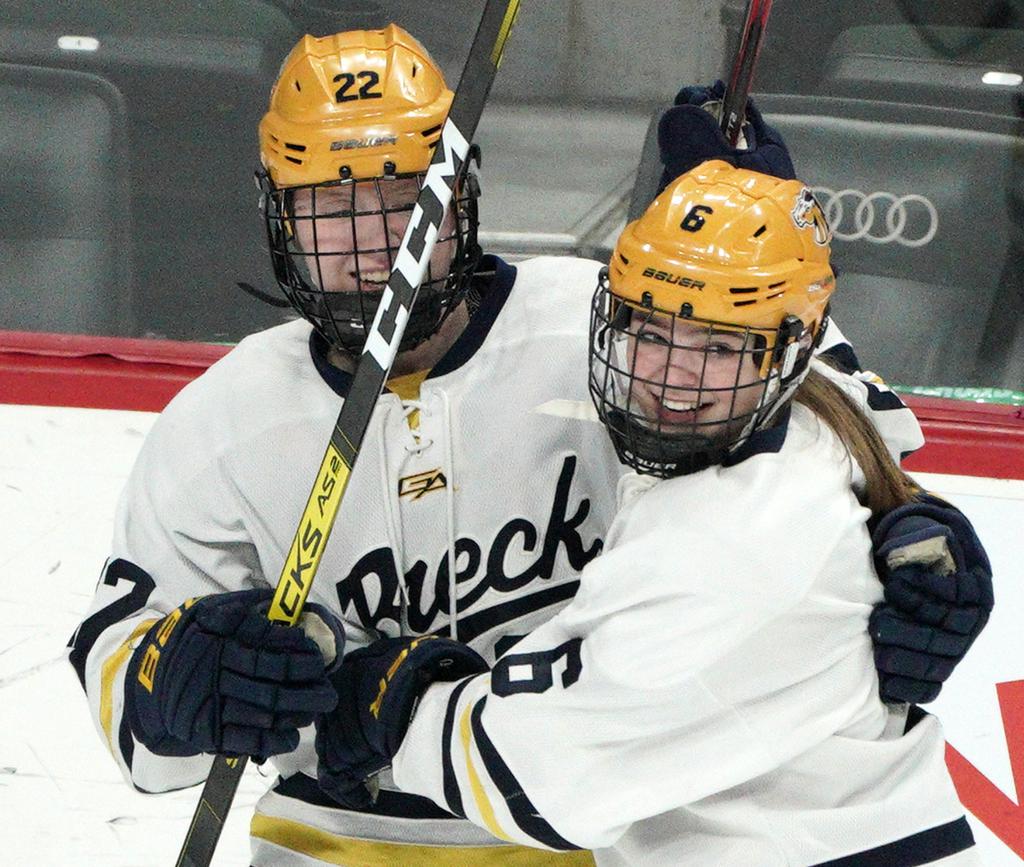 In the past three seasons, Breck has outscored its opponents 57-7 at the Class 1A state tournament. Only twice in that stretch has a game been decided by less than five goals.

The Mustangs’ 6-0 victory over Cloquet-Esko-Carlton on Saturday was the latest example of the team’s run of dominance. It’s the first time any school has won three consecutive Class 1A state championships, which has fans and hockey observers asking: Is it time to move up to 2A?

“I don’t really have an opinion on that,” Breck coach Steve Persian said. “It’s probably a better question for the leadership of the school.”

Recent history of teams making the jump up hasn’t yielded results. Neither Blake — a seven-time Class 1A girls’ champion — nor Duluth Marshall’s boys team — a perennial 1A powerhouse — have made the state tournament.

“It’s hard to compete with a team that pulls from the top players in local communities. We don’t have the fortune to do that,” Cloquet-Esko-Carlton coach Courtney Olin said. “I wouldn’t trade our girls for anyone, but I think that it’s not exactly a fair challenge going in.”

Breck’s Emily Zumwinkle set a new state tournament record, regardless of class, with eight assists. She tied a record held by Roseville’s Ronda Curtin with four assists in a period. Zumwinkle recorded the quartet in the first period against quarterfinal opponent Luverne.

Hutchinson’s Alex Hantge was credited with five assists in the Tigers’ consolation semifinal vs. Willmar. She shares the single-game record with eight others.

Roseau’s Anika Stoskopf received the Herb Brooks Award for Class 2A. Cloquet-Esko-Carlton’s Taylor Nelson received the award for 1A. The award is given to players who best represent the legendary hockey coach’s values and character.

Minnetonka edged Maple Grove 3-1 to claim third place in Class 2A for the second season in a row. Hanna Baskin’s goal 43 seconds into the game gave the Skippers an early lead. Up 2-1, Baskin scored again with 3:33 remaining to clinch the victory.

Roseau cruised to a 4-0 victory over Hill-Murray to claim the Class 2A consolation championship. Roseau struck first late in the first period and added a pair of goals in the second to open up its lead. Roseau used three goalies in the shutout.

Hutchinson defeated South St. Paul 5-3 in the Class 1A consolation championship despite being outshot 46-14. With the Tigers 4-3 heading into the final period, Hutchinson goalie Hannah Ludwig took control, stopping 21 shots.

Attendance for Saturday’s two-game session at Xcel Energy Center was 5,192, breaking the previous record mark of 4,566 set in 2017. The championship session format began in 2015.