Quinnipiac-bound senior Olivia Mobley scored 57 goals and had 37 assists in leading the Mustangs to their third consecutive Class 1A state championship. 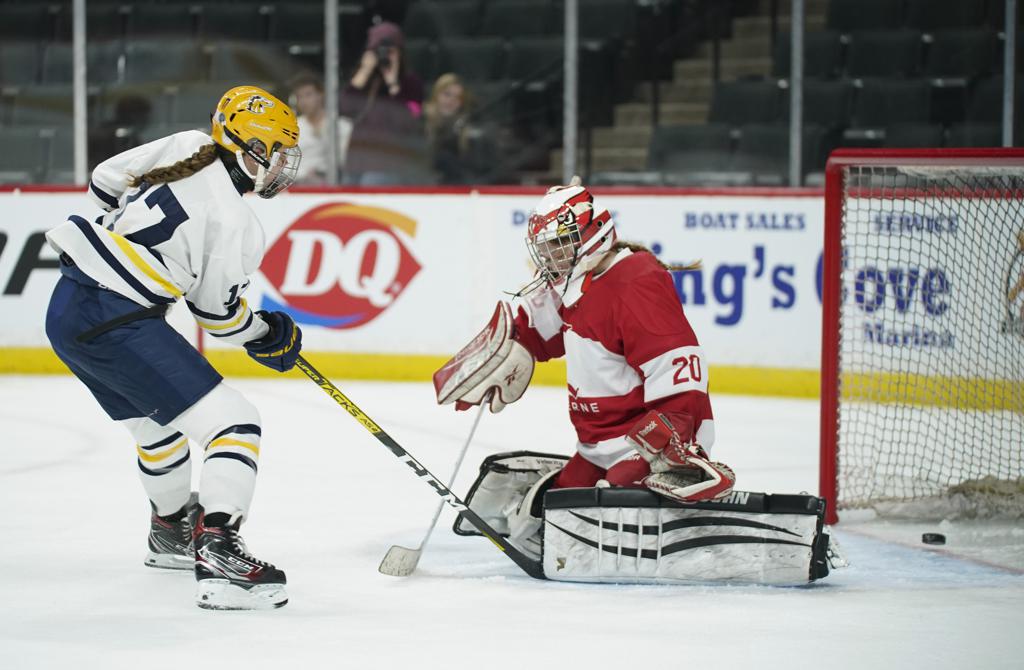 Breck's Olivia Mobley (17) slipped the puck between the pads of Luverne Cardinals golaie Cheyenne Schutz in the first period Wednesday in the Class 1A quarterfinal. Photo: JEFF WHEELER * Jeff.Wheeler@startribune.com

What a weekend for Breck senior forward Olivia Mobley.

A day after Mobley and the Mustangs capped off their third consecutive Class 1A state championship, Mobley was named Ms. Hockey for 2020 as the top senior girls’ hockey player in the state.

“It’s been unreal. The state championship then following to this,” said Mobley, referring to the Mustangs’ 6-0 victory over Cloquet-Esko-Carlton. “I almost started tearing up on stage just now. It’s been wild.”

The tears flowed in bunches once Mobley made it off the stage. Greeted by her teammates, family and coaches, chants of “Mobes” broke out as she made her way through the crowd, making a point to hug just about anyone she crossed paths with.

“I heard my team yelling before I even heard my name called,” Mobley said. “They’ve been my second family. For them to be here is really special for me.”

The emotion extended to her coach Steve Persian, who couldn’t help but get teary-eyed as Mobley was honored.

“It’s pretty emotional,” Persian said. “For her to get recognized that way is well deserved and pretty special.”

Mobley, who has committed to Quinnipiac, finished the season with 57 goals — including a team-high eight in the state tournament — and 37 assists for 94 points. In 170 career games, Mobley scored 158 goals and tallied 123 assists for 281 points.

“She’s going to be an example all the way down to some of these eighth-graders that are in the program,” Persian said.

Mobley is the 25th recipient of the Ms. Hockey award and the second Breck player to receive the honor. Grace Zumwinkle won in 2017.

Other finalists for the award were forwards Hannah Corneliusen of Warroad, Lily Delianedis of Blake and Sydney Langseth of Eden Prairie, and defenseman Maggie Nicholson of Minnetonka.

Anna LaRose of North Wright County was named Senior Goalie of the Year.

Both awards were announced Sunday in St. Paul at a banquet sponsored by Let’s Play Hockey magazine and the Minnesota Wild.