2020 Class 1A and Class 2A all-tournament teams revealed

Twenty-four players — 12 from each class — were honored with all-tourney selections this postseason. 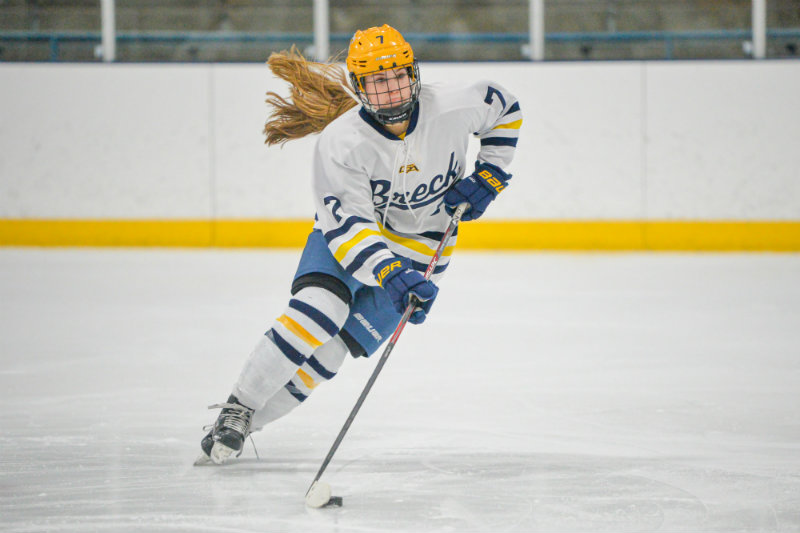 In addition to helping Breck win this year's Class 1A state championship, freshman Ava Lindsay (pictured) was one of three Mustangs selected to the small-school all-tourney team. Photo by Earl J. Ebensteiner, SportsEngine

Breck, which won its third consecutive state championship on Saturday, got a little extra excitement in the form of some bonus hardware that was handed out to a few Mustangs during the postgame ceremony in the Xcel Energy Center in St. Paul.

Ava Lindsay, a freshman forward from top-seeded Breck, was one of three Mustangs chosen to the Class 1A all-tournament team. A Minnesota commit, Lindsay put up impressive offensive numbers during the tourney. She recorded seven points, including a goal and three assists in the Mustangs’ 6-0 Class 1A state championship victory over No. 3 seed Cloquet-Esko-Carlton.

Mobley has been stockpiling awards recently, being named this year’s Ms. Hockey at a banquet Sunday, and she was announced the Star Tribune’s Metro Player of the Year in girls' hockey a week ago. A three-time all-tournament honoree, Mobley scored eight goals and added two helpers in this season’s tourney. A Qunnipiac commit, Mobley finished her season with 57 goals and 37 assists while helping Breck to yet another state championship. Zumwinkle, a Minnesota commit, had eight assists in the tournament.

Class 1A runner-up Cloquet-Esko-Carlton also had three players chosen to the all-tournament team. Forwards Tenley Stewart and Taylor Nelson were selected alongside freshman goalie Araya Kiminski. Stewart and Nelson combined for three goals and four assists last week, while Kiminski had a shutout, and stopped a total of 66 shots and had a 2.85 goals-against average in three tournament games.

While Breck and Cloquet-Esko-Carlton combined for six all-tourney recipients, six spots were reserved for players from Class 1A's Warroad, Hutchinson and South St. Paul. Despite being upset 5-3 by the Lumberjacks in the semifinal round on Friday, the second-seeded Warriors also got three honorees in forwards Geno Hendrickson and Sydney Phaneuf, and defender Karlie Meeker. Hendrickson and Phaneuf each had a goal and an assist in their loss to Cloquet-Esko-Carlton.

In Class 2A, No. 2 seed Andover was rewarded for knocking No. 1 seed Edina off its thrown. The Hornets, who won the Class 2A state title in 2017, 2018 and 2019, were taken down by a Huskies team that boasts four all-tournament recipients.

Andover forwards Gabby Krause, Jamie Nelson and Peyton Hemp, and defender Kennedy Little helped guide Andover to just a two-loss season and a 5-3 triumph over Edina to claim the big-school title. Krause powered Andover offensively with two goals and an assist in the championship game after netting the overtime winner in the Huskies’ 4-3 victory over No. 3 seed Minnetonka in a semifinal matchup on Friday.

The all-tourney teams, presented by the Minnesota State High School League and Wells Fargo, were chosen by a panel of coaches who attended the tournaments.

View the tables below to see a complete list of who made the teams.