The Packers' Sarah Wincentsen scored the first two goals of the game, helping her team defeat the Zephyrs. 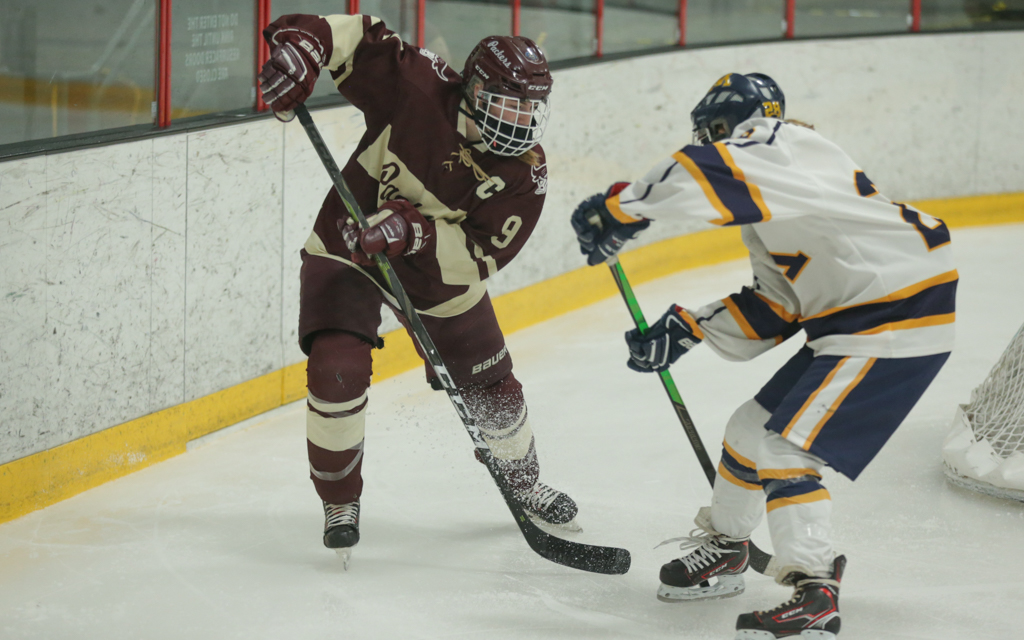 South St. Paul's Makenna Deering (9) battles with a Mahtomedi player for a loose puck in Friday night’s game. Deering had a shorthanded goal in the Packers’ 3-1 victory over the Zephyrs. Photo by Jeff Lawler, SportsEngine

A typical offseason can seem like a long wait for high school hockey players to return to the ice.

Add an extra-long break due to the COVID-19 pandemic and a talented roster coming off a Class 1A state tournament bid, and you can understand why South St. Paul’s players were itching for Friday's season opener against Mahtomedi at the St. Croix Valley Recreation Center.

Despite a slow start to the game, the Packers were rewarded for the wait by defeating Metro East Conference foe Mahtomedi 3-1.

"We've been waiting to get back," said South St. Paul’s Makenna Deering. "At first, we were a little rough out there, but to step back on the ice and get our feet moving was the best feeling we've had in a long time."

South St. Paul, ranked No. 3 in the Class 1A preseason coaches’ poll, came into the regular season with some buzz with its talented group of returners.

The Packers (1-0) started the season planning to have an experienced trio of team captains, seniors Deering and Ella Reynolds, and junior Lilie Ramirez, a Minnesota State Mankato commit. However, those plans were dashed when Reynolds suffered an injury that will likely force her to miss the season.

"Ella is an all-state forward. She is one of the premier Class A forwards in the state that was to come back and help our team," Palmquist said. "We are certainly going to miss her."

Last season, Deering, who is a Bemidji State commit, Reynolds, and Ramirez were the team's three leading points scorers for a Packers' squad that won 19 games and the Class 1A, Section 4 title. South St. Paul and Friday's opponent, Mahtomedi, met in the section semifinals where the Packers won 2-1.

Reynolds was the team's leading scorer with 19 goals, so it is no surprise that her teammates and fellow captains will miss her on the ice.

"We've all been on the varsity since seventh, eighth grade, so we have really good chemistry," Deering said about her fellow captains.

The Zephyrs finally hit pay dirt in the third period when Karen Karen Miller found the back of the net to get Mahtomedi on the scoreboard.

South St. Paul, like many Minnesota winter high school sports, started its season's slate of games with the shortest preseason practice amount they have ever experienced. Minnesota prep teams were allowed to begin practices on Jan. 4, with games starting this week.

Most teams will have plenty of practice to catch up on over the coming weeks. But that doesn’t mean South St. Paul was not happy with its start.

"We came out of this game thinking, 'Okay, well now we know more about what we've got to work on,'" Palmquist said. "But we've got a good foundation from the week of practice, and a lot of veterans. But I thought our young girls did a really good job tonight, too." 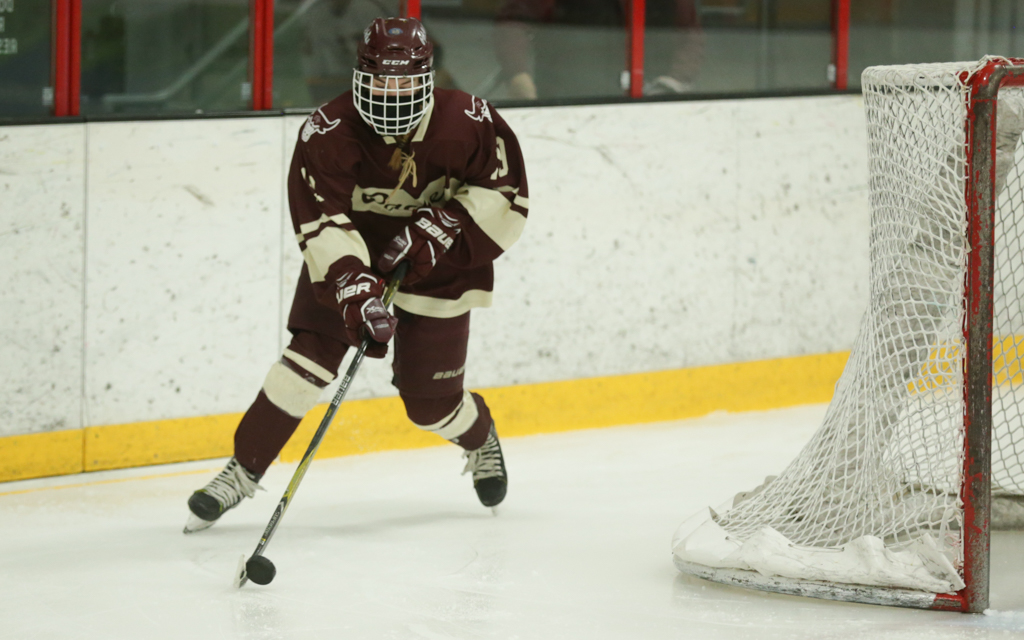 South St. Paul's Sarah Wincentsen (19) tries a wrap-around shot as she circles behind the Mahtomedi goal Friday night. Wincentsen had two goals for the Packers in her team's 3-1 victory over the Zephyrs. Photo by Jeff Lawler, SportsEngine

So far, so good for Sarah Wincentsen and South St. Paul, ranked No. 3 in the Class 1A preseason coaches’ poll.

Wincentsen scored two goals, one in each of the first two periods, as the Packers (1-0) started their season with a 3-1 defeat of Mahtomedi (0-1) at the St. Croix Valley Recreation Center in Stillwater on Friday night.

It didn’t matter how many players were on the ice for the Packers’ offense Friday. Wincentsen scored an even-strength goal in the first period, and her second goal came on the power play. Makenna Deering scored a shorthanded goal in the third period to increase South St. Paul’s lead to 3-0.

Karen Miller ended the Packers’ shutout bid, however, tallying Mahtomedi’s lone goal in the third period with about five minutes left in the game.

These teams last met in the Class 1A, Section 4 semifinals last winter, where the Packers won 2-1 on their way to a state tournament berth. 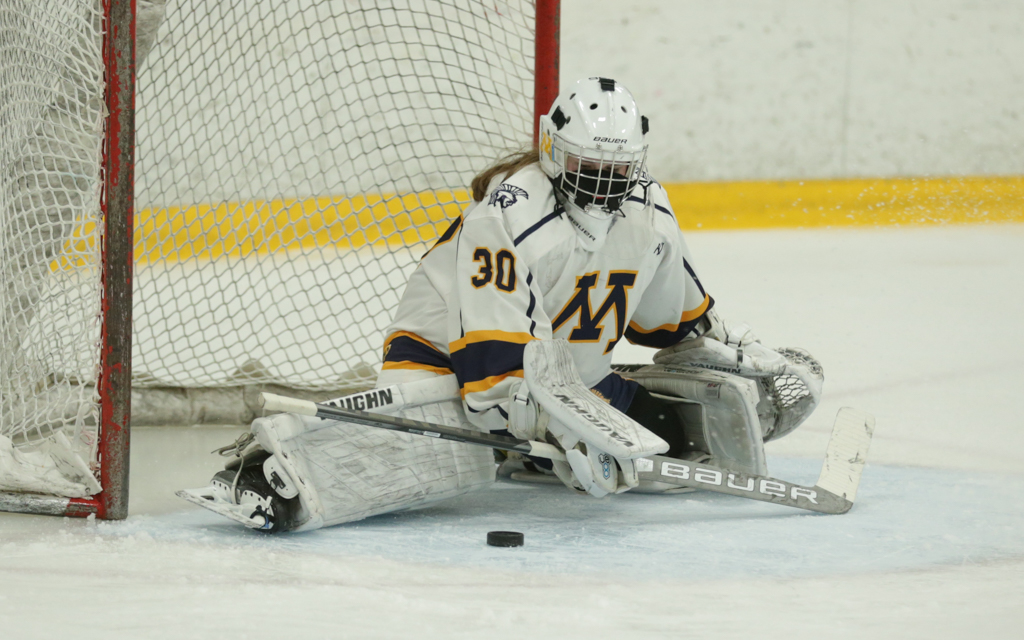 Mahtomedi's Ella Heath (30) makes a pad save against South St. Paul. The Zephyrs fell to the Packers 3-1 Friday night in Stillwater. Photo by Jeff Lawler, SportsEngine