Initially expected to only play a game or two, Nora Wall has gone from an emergency sub with a broken stick to the Panthers' full-time inspiration for this abbreviated season. 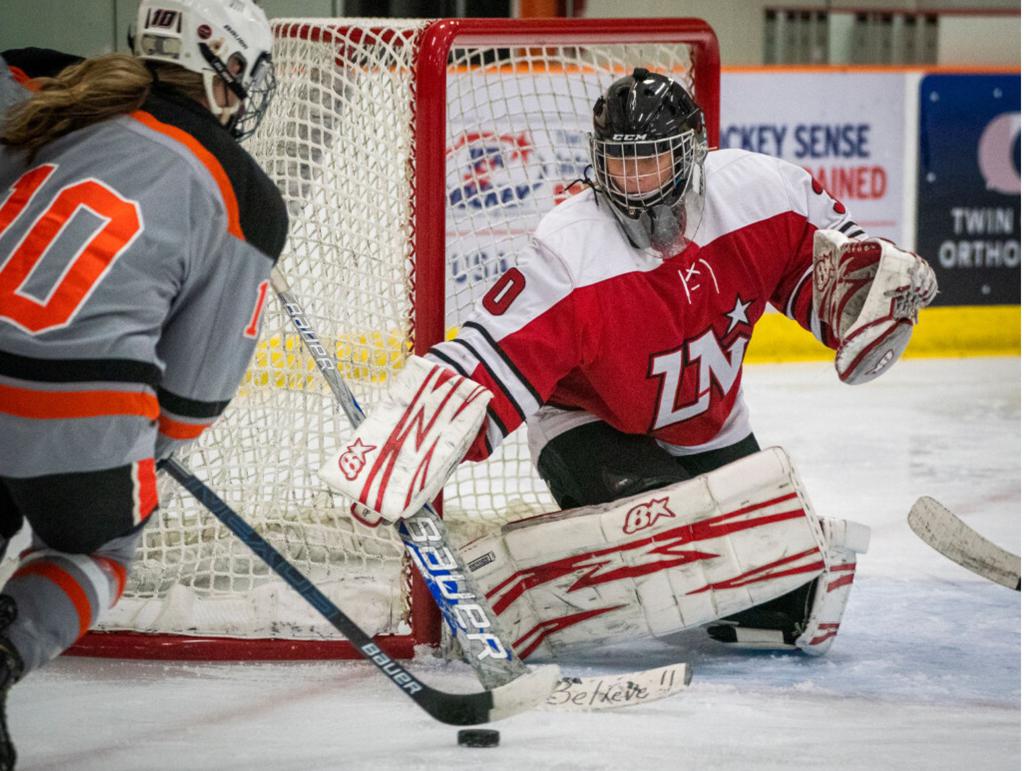 Lakeville North goalie Nora Wall, in her second hockey game, defended against Farmington’s Samantha Moehle in a Jan. 19 game. On her stick, her coach wrote "Believe'' on the tape holding it together. Photos: Leila Navidi * leila.navidi@startribune.com

Given her last name, Nora Wall seemed born to play goaltender. But the Lakeville North senior is making her hockey debut this season, an unusually late start that has earned her untold respect and so far, one game puck.

In the Panthers’ season opener Jan. 15, Wall and her teammates edged Apple Valley 6-5 in overtime. Wall stopped 12 of 17 shots despite nerves that turned her legs to boiled spaghetti.

Afterward coach Buck Kochevar presented Wall the game puck, a little token for a player he assumed would become the backup once a veteran goaltender arrived. That veteran player has since decided not to come back, however, thrusting Wall from novice part-timer to permanent starter.

Until recent months, Wall knew skating as a casual outdoor winter activity. Now the Panthers’ fortunes in net this season rest on a former soccer and tennis player living a dream.

“I always wanted to play hockey my whole life. Plus, I’m a busybody, I need to be doing something,” said Wall, who responded when her best friend, Panthers co-captain Katie Doll, posted on Snapchat that the hockey team needed anyone interested in playing goalie.

Doll and co-captain Chloe McKinney found old goalie pads and a chest protector in the Ames Arena storage room. But the helmet, stick and skates were for regular skaters. Fitting of her hand-me-down gear, Wall said she stepped on the ice for the first captain’s practice “and fell right on my butt.”

After helping her friend to the net, Doll, who plays defense, demonstrated the butterfly technique for Wall.

“I say this in the nicest way possible,” Doll said with a laugh, “but I could see that she needed some work.”

More help arrived. Wall received proper pads and instructions for putting them on from Lakeville North senior Skylar Vetter, who has played goalie her entire high school career on the boys’ team.

Her uncle, Rob Laden, brought Wall to training sessions at Stauber’s Goalcrease. Laden’s daughter, Chelsea, was a Star Tribune All-Metro third team selection at goalie as a Lakeville North senior in 2011 and played at Quinnipiac.

“I realized that I was getting the hang of it and I thought, ‘I think I could do this,’ ” she said. “I hate doing badly at anything. So that automatically makes me work to be better.”

Said Kochevar, “Nora told me, ‘I’m not here to embarrass myself. I’m here to help keep you in games.’ ”

Against Apple Valley, Wall helped her team stake a 5-3 lead after two periods. She played with a broken goalie stick, which Kochevar double-taped for stability. He wrote “Believe” on tape covering the stick blade.

When Apple Valley scored twice and forced overtime, Doll aided her best friend. Neighbors through sixth grade, the duo shot pucks in Doll’s driveway once in awhile. Now Doll vowed to bury a shot that counted.

After telling herself, “I’m going to get this game over with as fast as possible,” Doll scored just 27 seconds into overtime.

Kochevar said the energy in the locker room after the game “felt like we were going to state.”

Wall said, “Buck threw me the game puck and I asked, ‘What the heck is this?’ ”

Standing in a circle, their arms linked as they swayed, players sang their traditional victory song, “The Panther Bunch,” a rewrite of “The Brady Bunch” television sitcom theme. Kochevar provided percussion, banging a stick on a garbage can.

“She wants to challenge herself and that’s a great life characteristic,” said Jacka, who played goalie at Eveleth High School for Bobo Kochevar, Buck’s late father. “She has a presence in net. You couldn’t imagine that she just put on the pads. I only wish she was in ninth grade.”

Though the Panthers dropped their next two games, they will mimic their new goaltender and work to improve throughout the shortened season.

“I have so much respect for her,” Doll said. “When you take those extra steps of bravery and courage, you can do what you put your mind to.”