The Stars jumped out to an early lead and didn't let the Lady Warriors back in for a 3-1 victory. 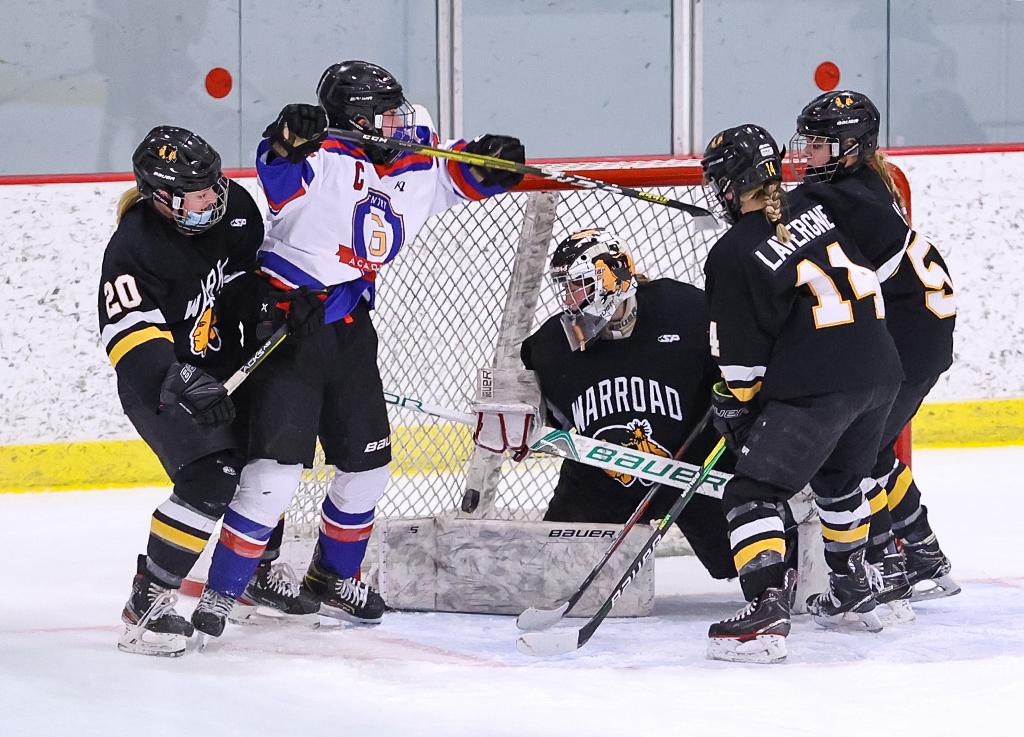 Gentry Academy's Angelina Ruiz gets the puck up and over the pad of Warroad goaltender Kendra Nordick. Ruiz's goal put the Stars up by two goals in the second period. Photo by Cheryl A. Myers, SportsEngine 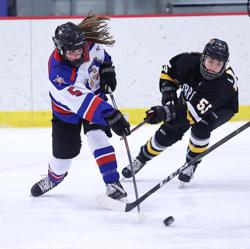 Whenever “Superman” by Soulja Boy rings through the locker room halls of TCO Sports Garden in Vadnais Heights, you know all is good with the Gentry Academy girls’ hockey team.

On Friday, that music played louder than ever as the Stars picked up a 3-1 victory upsetting Warroad, a team that had not lost all year.

It took a lot for this Stars team, but right after faceoff, the team looked up to the challenge. They controlled the puck and came up with multiple chances to find the back of the net against the Lady Warriors, ranked No. 1 in the Class 1A Let’s Play Hockey poll.

“As a whole, we were really focused,” Gentry Academy coach Paige Jahnke said. “The whole week, this was we’ve been keeping an eye on.”

The story of the first period came on the defensive side for the Stars. Warroad (5-1) had three power play chances but nothing to show for it. Gentry Academy (6-1) goalie Maggie Vance came up with stop after stop, including a moment where she blocked five consecutive shots.

“My [defense] really helped me out there,” Vance said. “[Warroad] kept pushing, but we found a way to stop it.”

Jahnke knew the importance of strong defense and how it can correlate into better offense.

“We really preach to the kids, the best offense if the best defense,” Jahnke said. “Taking care of the [defensive]-zone, as well as reading the power play and making sure we have people covered.”

The defense finally turned into offense for the home team. Forward Audrey Jackson controlled the puck into the Warroad zone. Jackson soon lost the puck, but sophomore Riley Reeves was there to scoop it up and find the back of the net to give the Stars a 1-0 lead with 1:51 left in the first period.

“We played exactly what our game plan was,” Jahnke said.

That game plan continued into the second period, with the Stars again the aggressors, finding spots on the ice and unloading on shots. One finally got through when Angelina Ruiz, a senior captain, scored her fourth goal of the year.

Down 2-0, the top-ranked Warroad team wasn’t out of the game just yet, though.

Just under two minutes later a wrist shot from Geno Hendrickson, her 11th goal of the season, brought the Lady Warriors back in and worked the deficit back to one goal.

“We knew we just had to keep our energy up,” Vance said. “We needed to stay consistent.”

The third period proved the grittiest of periods, with both teams finding scarce opportunities to get another goal.

Defender Kaylie Prater finally found a gap, rare for this period. With just two minutes left in the game she broke away from deep in her own zone, fired a shot that hit Warroad goalie Kendra Nordick, bounced off and rolled into the back of the net.

The goal was Prater’s second and arguably the biggest of the season, giving the Stars another two-goal lead before sealing the 3-1 victory.

“Probably one of the hardest working games we’ve had all year,” Jahnke said. “This is such a good group. We have great work ethic and hockey IQ.”

“We kept the pedal down, I think that was the biggest key,” Vance said.

As the coaches entered the locker room, a blast of “Superman” could be heard, and players and coaches celebrated the upset win.

“[It] kind of felt like us coaches were back on the team,” Jahnke said. “They earned that win.” 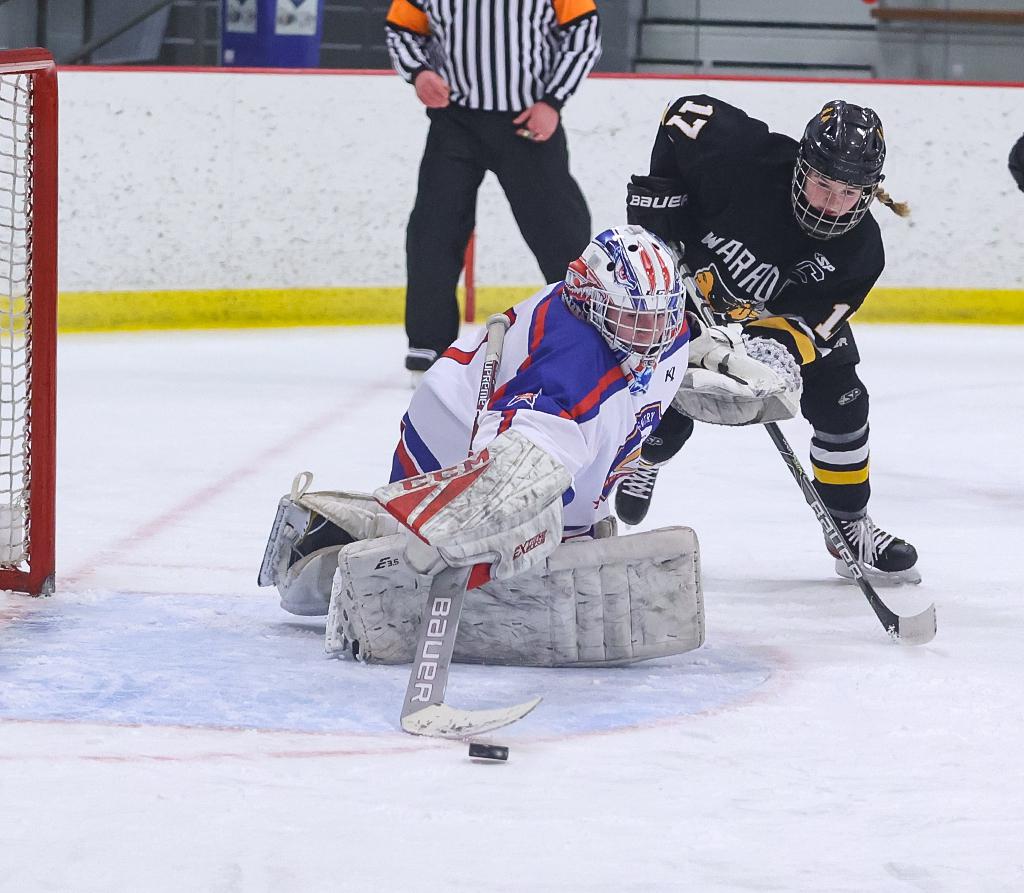 Stars goaltender Maggie Vance sends the puck to the corner. Vance tallied 24 saves in Gentry Academy's 3-1 win over Warroad, ranked No. 1 in the Class 1A Let’s Play Hockey poll. Photo by Cheryl A. Myers, SportsEngine

Gentry Academy shocked the top team in Class 1A when it took down Warroad 3-1 Friday night at TCO Sports Garden in Vadnais Heights, Minnesota.

The Stars took on the challenge of facing the No. 1 ranked team in the Class 1A Let’s Play Hockey poll immediately. Towards the late stages of the first period, Gentry Academy’s Riley Reeves took control of the puck and buried it into the net for the game’s first goal, giving the Stars a 1-0 lead.

Angelina Ruiz made it 2-0 late in the second period. Shortly after, Warroad’s Geno Hendrickson breathed life into the Lady Warriors and scored the team’s first goal a minute later.

The third period was highly contested with little movement from either team. Kaylie Prater changed that when she took off with the puck on a 2-on-2 and sent a wrist shot into the net, securing a 3-1 lead for Gentry Academy (6-1).

The loss marks the first time this season Warroad (5-1) has been on the losing end and the first game the team has allowed more than one goal in a game this season. 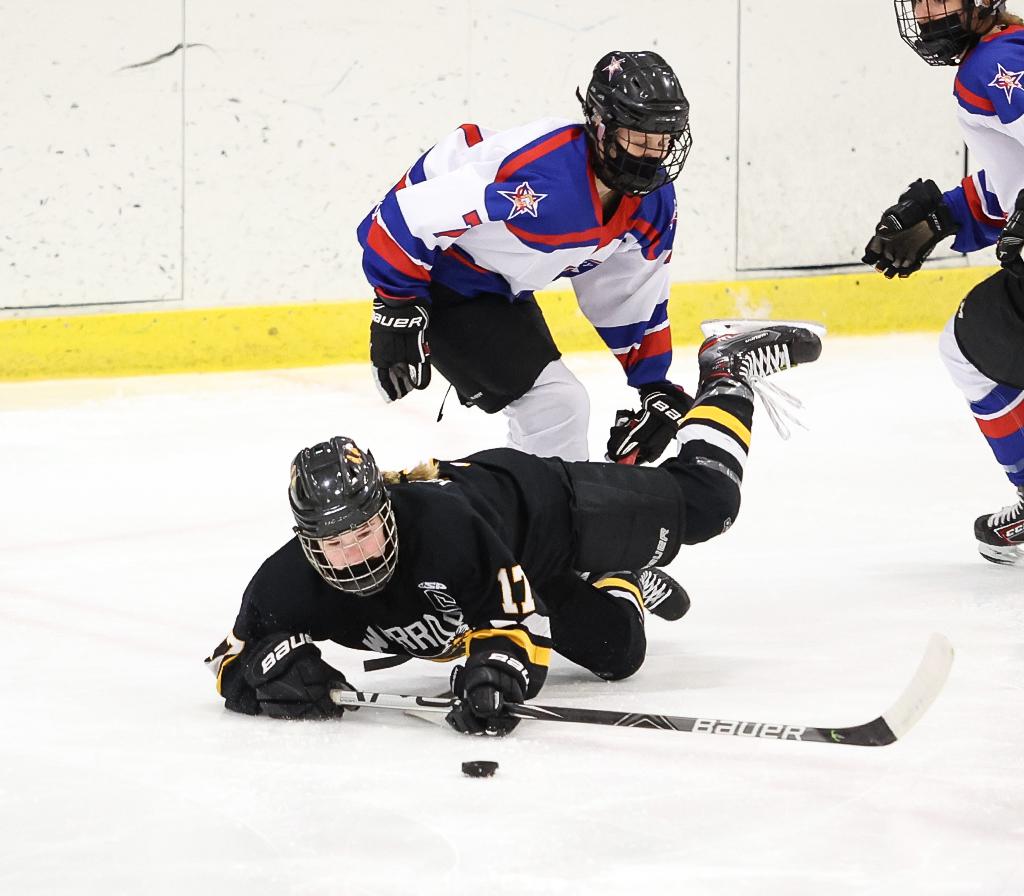 Warroad's Genevieve Hendrickson (17) is tripped by Cara Sajevic (7) early in the first period. Hendrickson, the Lady Warriors' leading scorer this season, scored their only goal of the game. Photo by Cheryl A. Myers, SportsEngine