Kaitlin Groess stopped all 22 shots she faced in the Cougars' 2-0 victory over the Bengals. 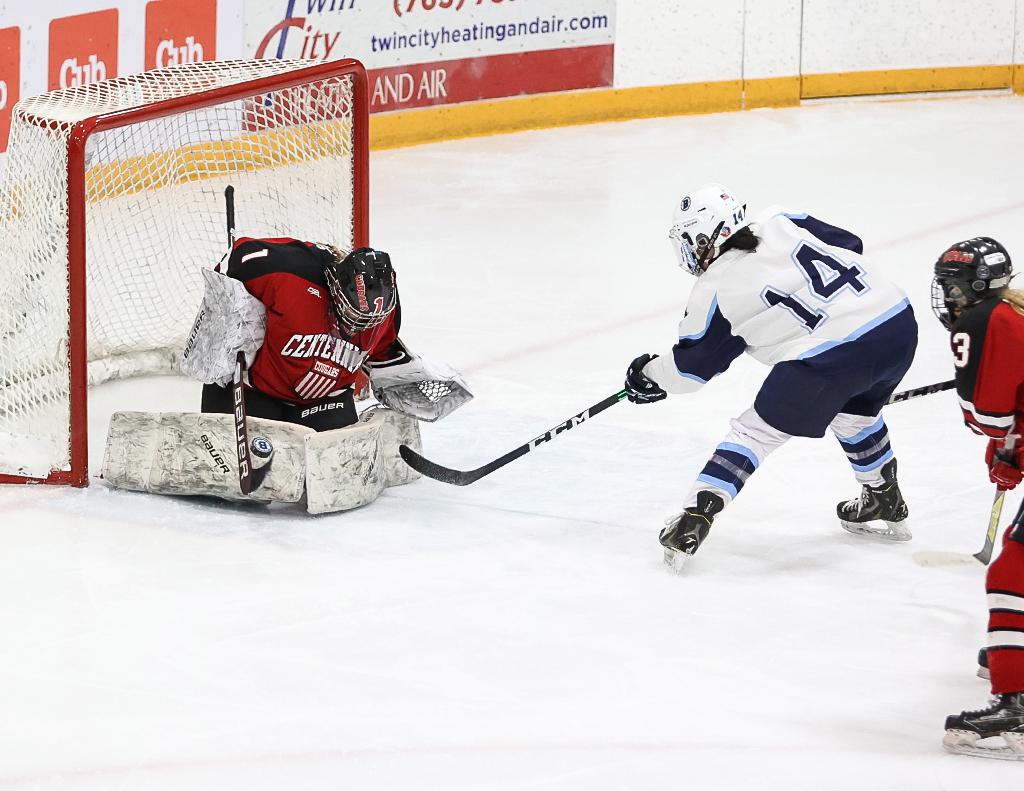 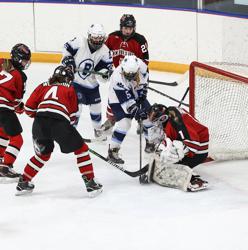 The fruity snack items are one of the superstitious rituals for Centennial freshman goaltender Kaitlin Groess. Her teammates all join in with various superstitious activities as well.

“I have to eat a GoGo squeeZ in the middle of every period,” Groess said, then adding another ritual to the list: “I have to wake up, make my bed right when I wake up the same way.”

Whether it’s the rituals, or the hard work on the ice, things are working for Centennial girls’ hockey. The Cougars (7-1, 7-1) pushed their winning streak to six games with a 2-0 shutout over Northwest Suburban Conference and Class 2A, Section 5 rival Blaine on Tuesday night at Fogerty Arena.

Groess made 22 saves for her third shutout of the season. The freshman improves to 6-1-0 with a 1.29 goals against average and .953 save percentage, a category where she came into this week ranked No. 10 in the state.

“It’s cool for her to finally get into high school and start off having a lot of success,” said first-year Centennial coach Sean Molin. “Because we know she’s going to be a really good goalie.

“I’m glad to see her have success right off the gate. It gives her a lot of confidence.”

Groess, who also works with Centennial assistant coach and goaltender with the Professional Women’s Hockey Players Association, Maddie Rooney, kept Blaine off the scoreboard in a very evenly played battle between two rivals. As teams battled for puck possession, a few solid offensive chances emerged, too.

With less than five minutes left in the opening period, Centennial senior forward Summer Francis took a Blaine turnover from the opposite blue line and drove down the ice for her first of multiple breakaway opportunities in the game. She shot the puck along the ice, causing Blaine sophomore goalie Hailey Hansen, who finished with 30 saves, to make a big pad save.

Two minutes later, it was Blaine senior forward Brielle Fussy who got in close at the other end and rang a shot of the crossbar in the scoreless game.

Only 25 seconds after that, Centennial grabbed the 1-0 lead. Taking advantage of another turnover in Blaine’s offensive zone, Centennial junior Megan Goodreau grabbed the puck and fed it immediately to Francis, springing her for another breakaway. This time, Francis went top corner on the blocker side with 2 minutes, 5 seconds left in the first period.

“The first one, I tried to deke her,” Francis said. “And then the second one, I knew that didn’t work, so I just went top corner.

It was Francis’ fourth goal of the season and third in her past two games.

In the second period, Blaine had some sustained offensive-zone time early before Centennial took its turn creating chances at the other end.

The Cougars grabbed a two-goal lead with another goal late in the period. After some sustained pressure, senior forward Lauren Paar got the puck in the slot, turned toward the net and fired, depositing the puck high on the glove side with 3:46 to play in the second period for her second goal of the season.

Blaine (5-3-0) found a few more scoring chances in the third, including a quick flurry of chances in front and off rebounds with about 6:30 left to play, but Groess and her defenders kept the puck out of the net.

“We have a pretty good skilled team, but we’re trying to get them to play gritty and play defense and backchecking,” Molin said. “I think tonight was probably our best regarding that stuff." 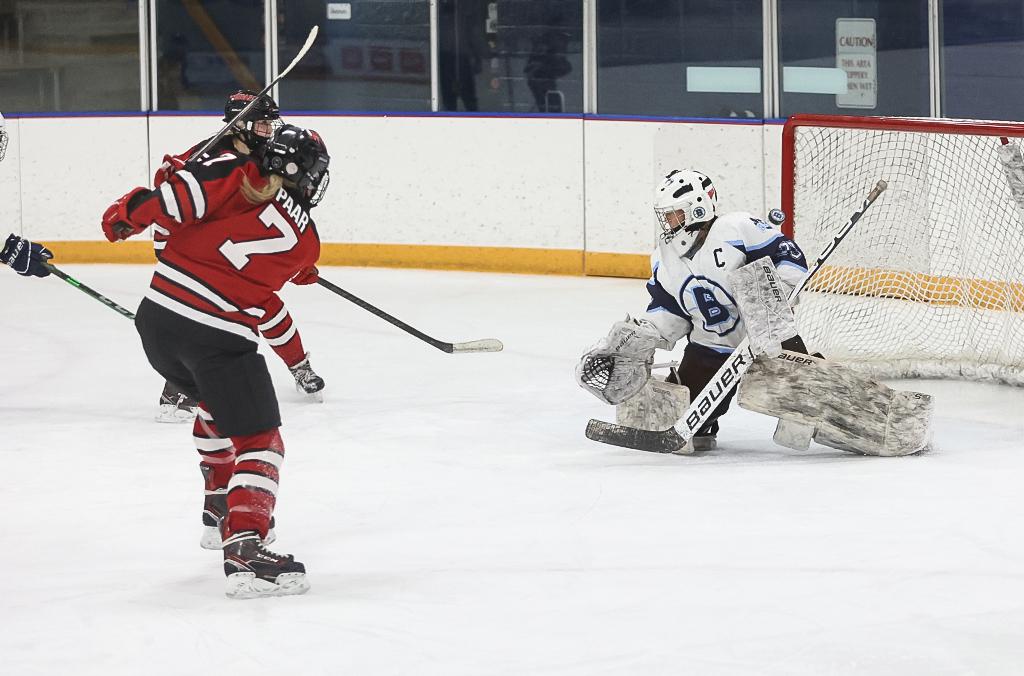 Lauren Paar (7) sends the puck over the shoulder of sophomore goaltender Hailey Hansen to put Centennial up by two goals. The Cougars defeated the Bengals 2-0 on Tuesday night. Photo by Cheryl A. Myers, SportsEngine

The Cougars (7-1, 7-1) have won six of the past seven meetings between the two teams across the past five seasons.

Senior forward Summer Francis scored on a breakaway in the first period and senior Lauren Paar added the insurance goal late in the second for Centennial. Freshman goaltender Kaitlin Groess made 22 saves for the Cougars, while Blaine (5-3, 5-3) sophomore Hailey Hansen stopped 30 shots at the other end. 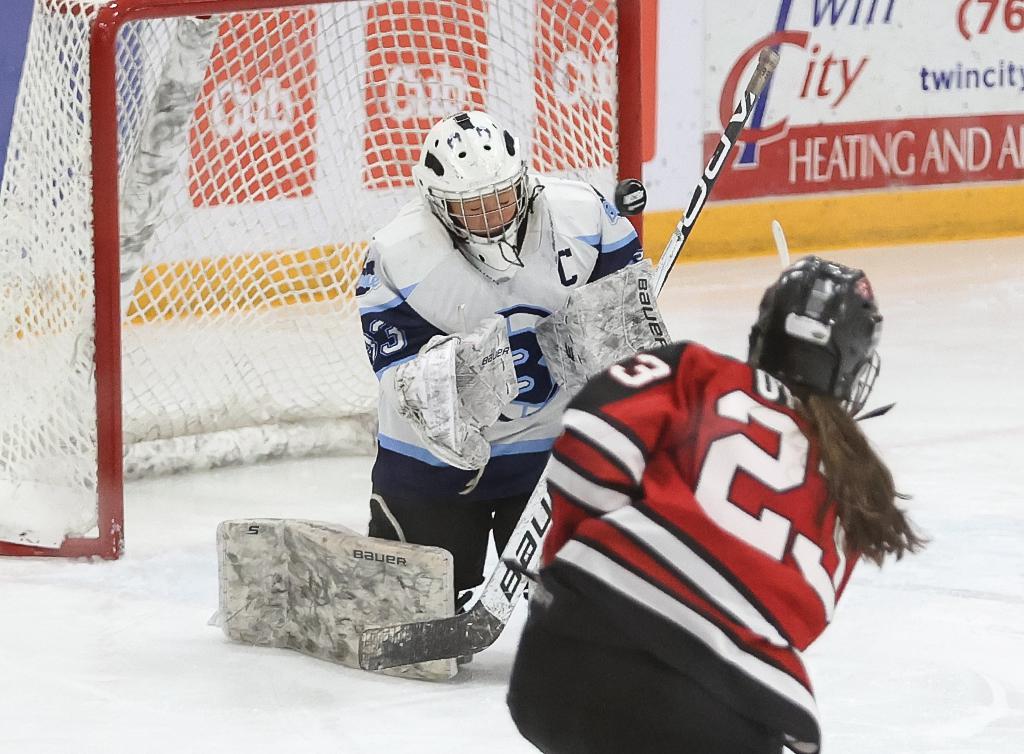 Sophomore goaltender Hailey Hansen stops the puck off her shoulder. Hansen finished the night with 30 saves for the Bengals. Photo by Cheryl A. Myers, SportsEngine