Avery Chesek clinched the victory for the Lightning 28 seconds into the overtime period. 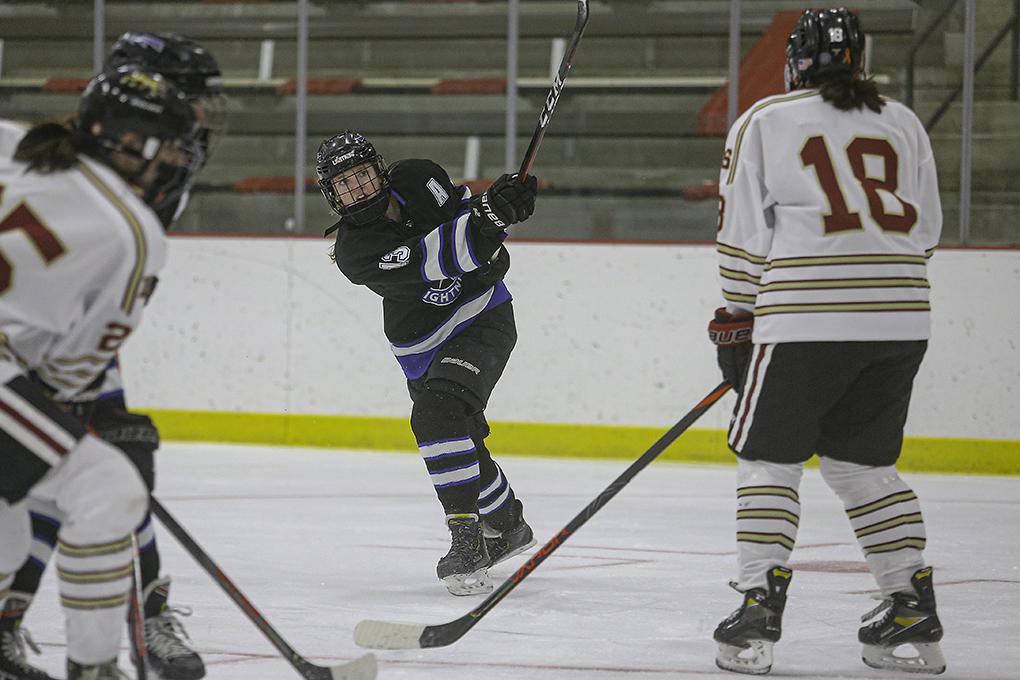 Eastview junior Avery Chesek (13) takes a shot on the Lakeville South goal in the first period. Her shot from a similar spot in overtime won the game for the Lightning. Photo by Mark Hvidsten, SportsEngine

Eastview managed to put a puck on top of the net before hitting the back of it.

A last chance shot in the waning seconds of regulation near the center line nearly dropped in for Eastview, only to end up on top of the goal.

It took just 28 seconds into overtime for Eastview to hone in on the target as a breakaway goal by Avery Chesek was the game-winner in a 1-0 victory Tuesday at Lakeville South.

Lakeville South, ranked No. 6 in the Class 2A coaches’ poll, had 14 seconds left on a power play to open overtime. The Cougars couldn’t capitalize and the No. 10 Lightning were quick to turn the momentum. 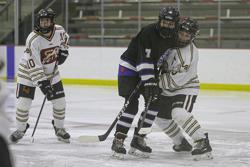 “Our defender, Nora (Stepan), was just trying to clear the zone,” Chesek recalled of the closing sequence. “It tipped off the (defense), it was an odd man rush. I saw a lane to shoot and just kind of fired it low to the side. It hit the inside pipe and it went in.”

Senior forward Brynn Swenson was credited with the assist.

On the other end of the rink, junior goalie Angie Lombardi was working on shutting out Lakeville South for the first time this season.

There was a moment of uncertainty before she was free to join the celebration pile.

“I heard it hit the pipe so I wasn't sure it went in,” Lombardi said. “I saw the ref pointed that it was a goal and I just jumped and skated as fast as I could to my team.”

Lakeville South hadn’t lost since the season opener and recently claimed a key win over Burnsville. Lakeville South, Burnsville and Eastview are now tied for first in the South Suburban Conference at 7-2-1.

Eastview coach Herb Harvey had the junior defender Stepan in mind not only for clearing the zone in overtime for the game-winner, but for her sliding in the way of a slap shot in the closing seconds of regulation to snuff out a Lakeville South scoring chance.

The Cougars ended with a 24-21 shots on goal advantage.

“That's the way you've got to give up your body if you want to win some games,” Harvey said. “We've got two good teams going. I don't want to say we got lucky, but we had good effort, they had some good chances, we had some good chances. It was two solid teams and we got one at the end on a nice shot.”

Lakeville South is no stranger to playing under pressure. Tuesday was the Cougars’ fifth straight overtime game. The Cougars entered the night leading the South Suburban Conference with 3.89 goals per game.

Lombardi shut that offense down, though, and notched her second shutout of the season. She would have preferred her team approach its 3.56 goals per game average, but she at least couldn’t claim boredom.

“I like games like this more, honestly, because I always feel like I'm in the game,” Lombardi said. “I'm ready to go and I'm not bored. It's fun that way, I think.” 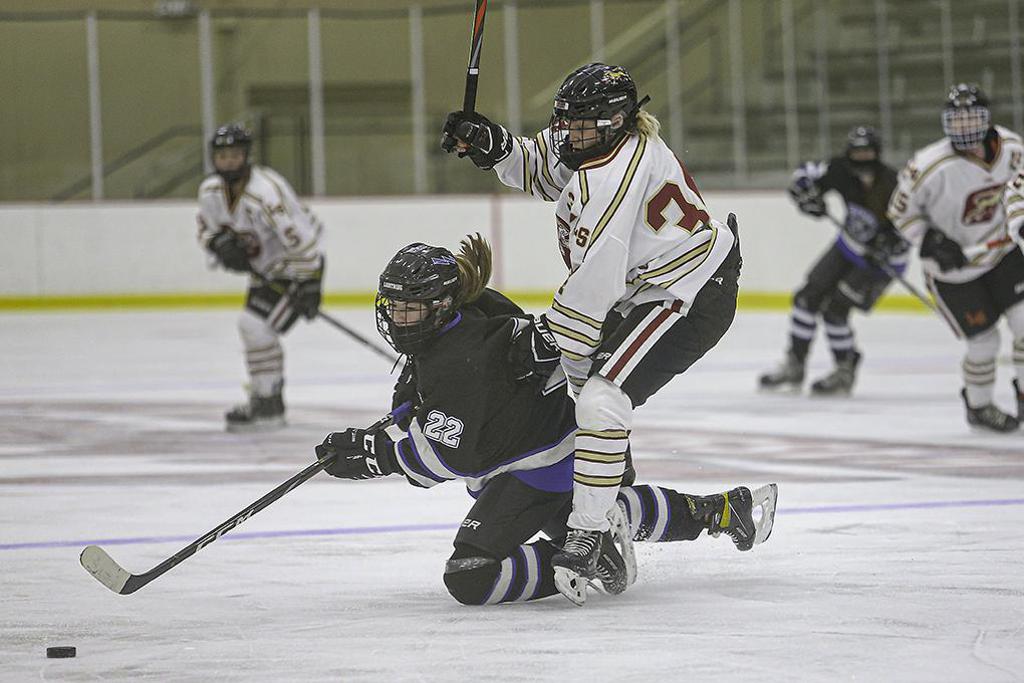 The two teams combined for ten goals in an Eastview win, but this time Eastview needed overtime to escape with a 1-0 victory on Tuesday at Hasse Arena in Lakeville.

Lakeville South got out of the gate with energy. The Cougars, ranked No. 6 in the Class 2A coaches’ poll, made Eastview junior goalie Angie Lombardi stop three shots in the first minute.

The No. 10 Lightning quickly settled in and held its opponent without another shot on goal or over eight minutes. Eastview had good looks, including from its second leading points getter Ceshek whose shot was snared by the glove of Lakeville South senior goalie Lauren Sorvari.

Both teams had power play chances in the opening period that ended in Lakeville South (7-2-1) maintaining an 8-7 shots on goal advantage.

The lid stayed on the nets in a scoreless, penalty-free second period. The Cougars surged midway through the period before the Lightning, and particularly captain and senior forward Mikayla Kelley, nearly broke the scoring open.

The game went to overtime still scoreless as each team killed a power play in the final five minutes of regulation. Eastview (7-2-1) put up a last-ditch effort in the closing seconds of regulation that landed on top of the net. Lakeville South senior forward Tori Olin came back and put a shot from the right circle on net that would have been the game winner with a second left on the clock. 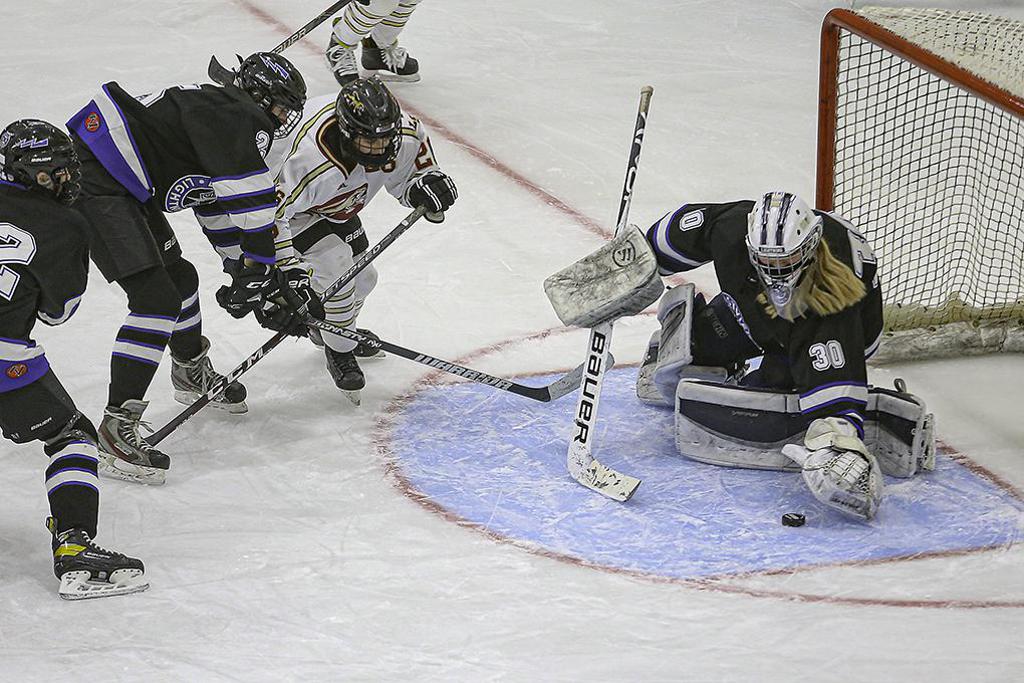 Eastview goaltender Angie Lombardi (30) reaches for a puck in the third period. Lombardi got the shutout for the Lightning. Photo by Mark Hvidsten, SportsEngine