Edina storms back in third period against Benilde-St. Margaret’s to stay unbeaten

For the second time in nine days, the Red Knights were stung by a two-goal third period from the Hornets. 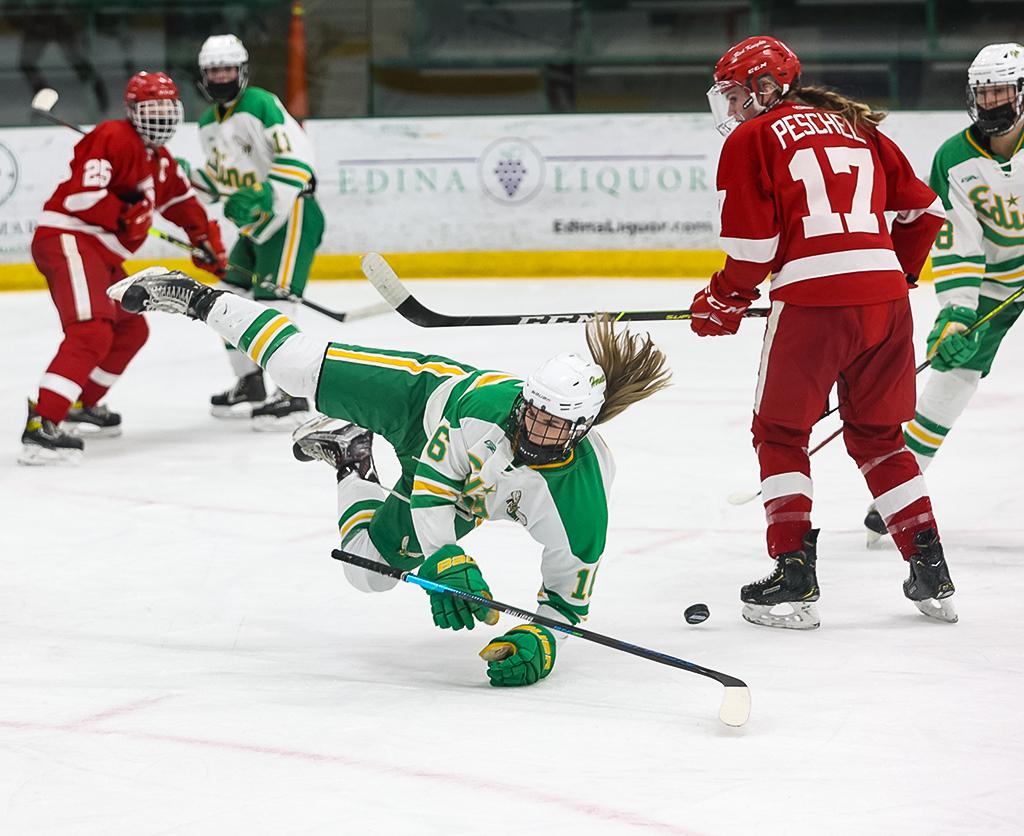 Emma Conner (16) is tripped at the end of the second period. Conner scored both of Edina's goals in a 2-1 win over Class 2A, Section 6 rival Benilde-St. Margaret's. Photo by Cheryl A. Myers, SportsEngine

Since Sami Reber took over as coach of Edina in 2017, her teams rarely find themselves trailing in games. Up until Thursday, the Hornets had yet to trail in a game this season.

Behind 1-0 after two periods of play, Edina responded. The Hornets got two goals from Emma Conner in the third period to defeat Benilde-St. Margaret’s 2-1 on Thursday at Braemar Arena.

These teams met earlier this season on Feb. 16. After two scoreless periods, Edina broke through with a goal. An empty-net tally put the game on ice as the Hornets (12-0-0) fended off the Red Knights, who are ranked No. 4 in the Class 2A coaches’ poll.

In the opening minutes of the teams' second matchup, it appeared things may go similarly to the last meeting. But after a scoreless first period Benilde-St. Margaret’s (8-3-3) had something to lean on, as the Red Knights outshot the No. 2-2A Hornets 10-3 in the opening period.

“[Benilde-St. Margaret’s] came out hard and got us on our heels,” Reber said. “We looked uncomfortable in all zones with the puck. We weren’t composed. It’s a learning moment for us.” 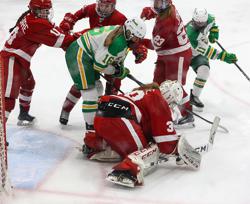 Building on that early momentum, Benilde-St. Margaret’s junior defender Emma Peschel buried a one-timer to give the Red Knights a 1-0 lead in the second period. The goal provided a roar from the crowd, something not often heard during the COVID-19 pandemic, which has led to games with limited attendance, social distancing and the wearing of face masks.

Once the second period concluded, Benilde-St. Margaret’s had a one-goal advantage while the Hornets headed to the locker room trailing for the first time all season.

“I think all of us knew we were starting to panic in the second period,” said Conner, a senior who leads the team and is among the state’s top goal scorers with 23 goals this winter. “We weren’t playing our game. When we came off the ice for the third period, we said we wanted to forget about that last period and start fresh.”

Despite the rare obstacle for the Hornets, Reber gave a message to her team but did what she usually does: rely on team leaders to fire up the rest of the group.

“During games, I’m only in the locker room for a few minutes,” Reber said. “It’s up to our leadership group and seniors to get the team fired up. I think our senior class and our veterans do a really good job of that.”

The message from the leaders had the team hooting and hollering on the bench, something that hadn’t been seen up to that point. Edina also had the luxury of starting the final period on the power play.

While the Hornets didn’t score on their first power play of the period, they eventually got two more opportunities. On the second one, the Hornets broke the scoring drought with Conner’s first tally of the game.

“We knew some of the younger players had not been in this position,” said Conner, a University of Minnesota commit. “We knew it was on us veterans to get things going.”

Minutes later, Edina had the puck with Conner nearing the goal. Off of a pass from junior defender Vivian Jungels, Conner took the puck and blasted it in the net to put the Hornets ahead.

“It’s been fun watching [Conner] transform over the past couple of years into the player she’s become,” Reber said. “She deserves all the credit she’s getting right now because she works her butt off. You see it in the offseason and it’s showing on the scoresheet now.”

Both Jungels and Conner are players with multiple years of varsity experience who are team leaders and top executors. Besides assisting on Conner’s second goal, Jungels made a key play late in the third period where she broke up a two-on-one with her stick. It was a play Reber said could’ve changed the game.

Though Edina avoided suffering its first loss of the season, the Hornets got the feeling of trailing for the first time. It’s likely not the last time Edina will face that. It’s also likely the Hornets will see the Red Knights again in the section tournament.

“[Benilde-St. Margaret’s] really gave us something,” Conner said. “This game sets up more for sections since we might run into them again. It gets us prepared and we know how it is when you’re down like that.” 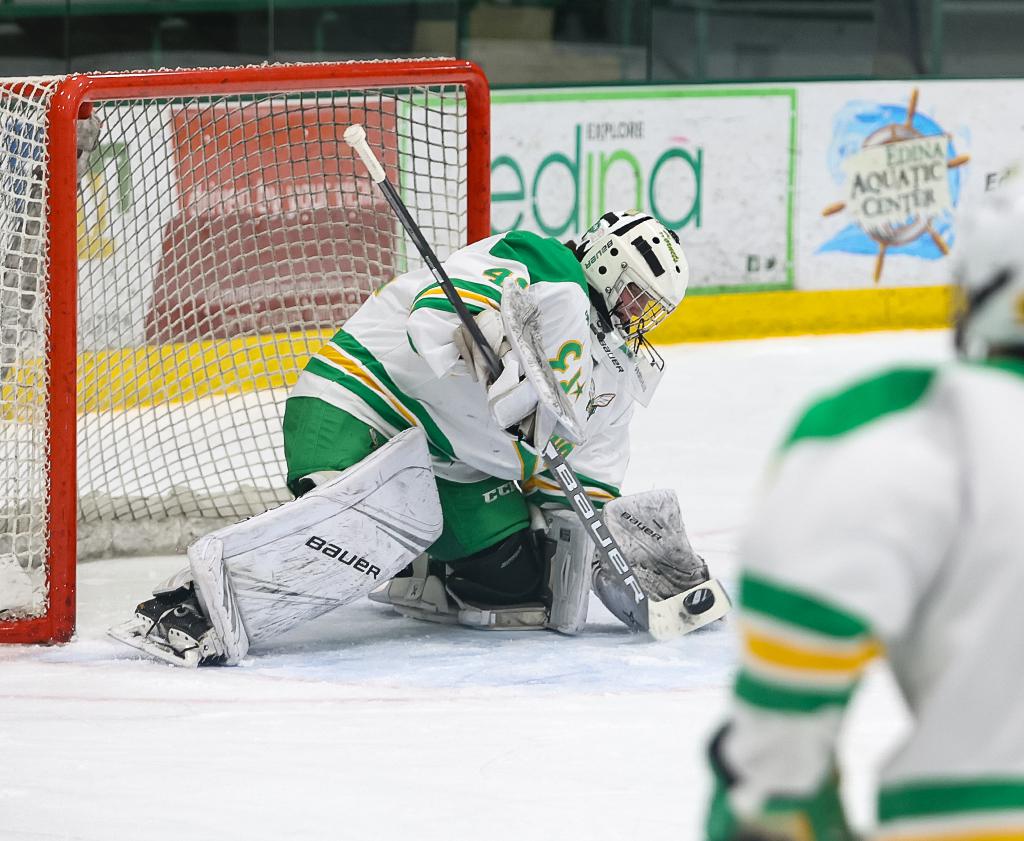 Sophomore Uma Corniea makes a save in the first period. The Princeton commit tallied 21 saves on Thursday night. Photo by Cheryl A. Myers, SportsEngine

Edina rallied after facing some rare adversity as the Hornets’ Emma Conner scored twice in the third period to defeat Benilde-St. Margaret’s 2-1 on Thursday at Braemar Arena.

This was the second time in nine days these two Class 2A, Section 6 rivals met. Edina (12-0-0) won the first matchup 2-0 on Feb. 16, and prior to Thursday's rematch, the Hornets hadn't trailed in a game this season.

After being shutout in the first meeting, the Red Knights, ranked No. 4 in the Class 2A coaches’ poll, found the back of the net in the second period against No. 2-4A Edina to take a 1-0 lead. The goal from Benilde-St. Margaret’s (8-3-3) was scored on the power play by junior defender Emma Peschel.

Trailing 1-0 after two periods, the Hornets rallied back thanks to Conner, the team’s leading scorer. The future Minnesota Golden Gopher now has 23 goals this season after her two tallies Thursday. Lily Hendrikson recorded assists on both of Conner's goals.

The starting goaltenders for both teams had save percentages above .950 prior to Thursday’s matchup and they both showed their prowess. Hornets sophomore goaltender Uma Corniea, a Princeton commit, finished with 21 saves. Red Knights senior goaltender Carley Greene finished with 22 saves. 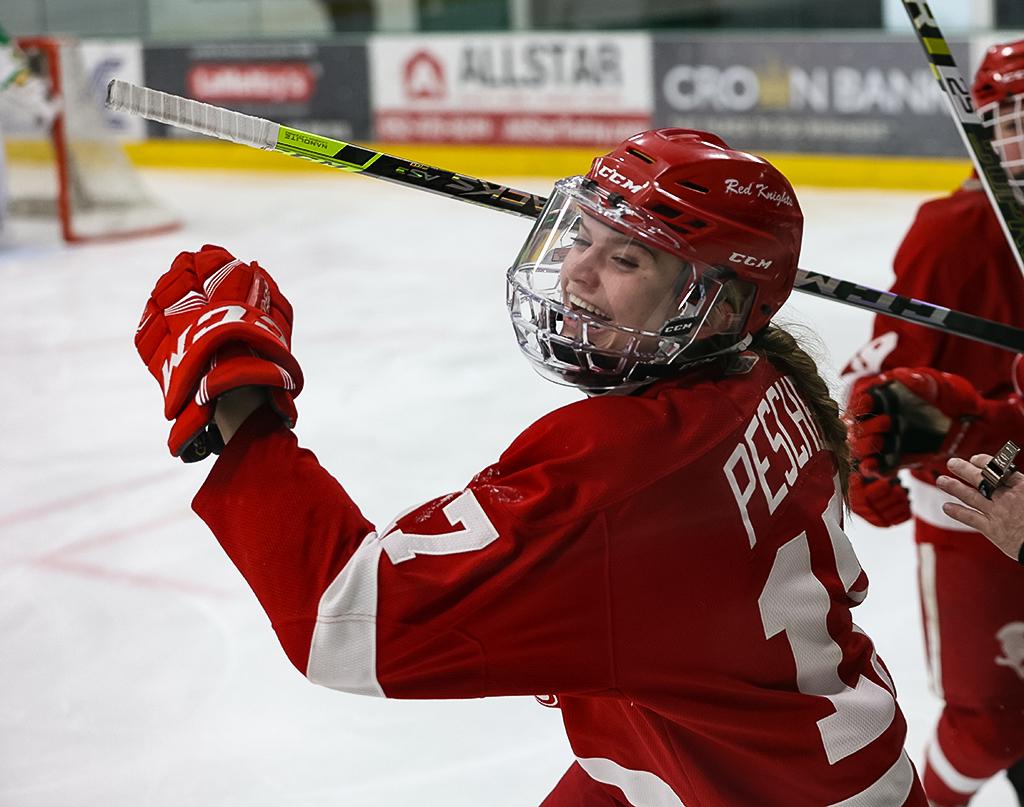 The Red Knights' Emma Peschel heads to the bench in celebration. Peschels' second-period goal gave Benilde-St. Margaret's a 1-0 lead over the Hornets. Photo by Cheryl A. Myers, SportsEngine