The Red Knights beat the Trojans for the second time this season, advancing them to Saturday's section championship game. 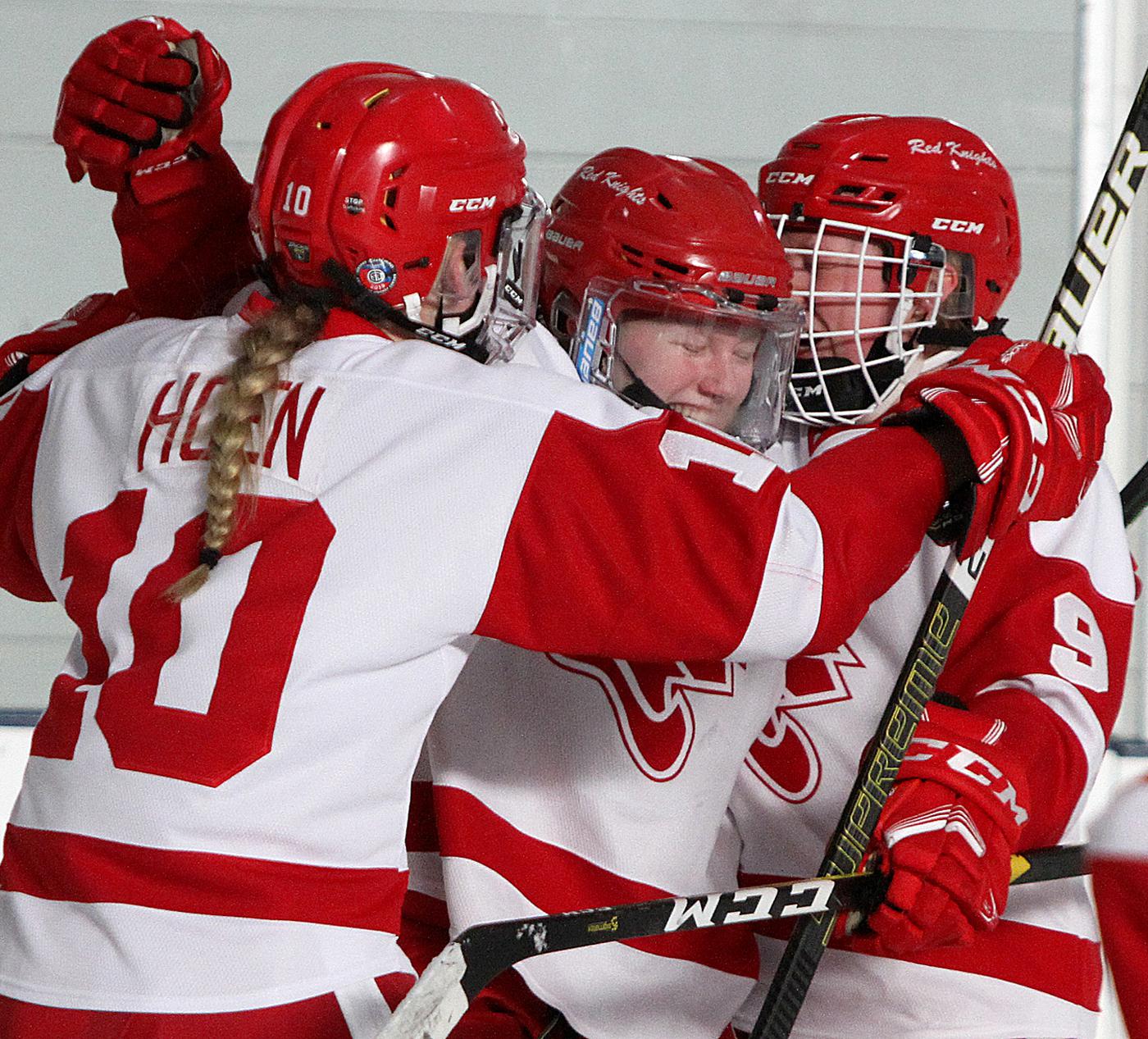 In a 1-1 game nearing the end of the second period, it seemed like the Wayzata goaltender had corralled the puck in her glove. But instead, the puck trickled out of her glove as play continued and Benilde-St. Margaret’s senior Olivia Haag immediately spotted the puck as she was behind the goal line.

She quickly stuffed it into the net for a wraparound goal to give the Red Knights a 2-1 lead with 1 minute, 5 seconds left in the middle period.

“The game had that kind of makeup to it where it was going to kind of be an ugly one to put you over the hump a little bit,” said Benilde-St. Margaret’s coach Shjon Podein.

The No. 2-seeded Red Knights added a pair of insurance goals in the third period on their way to a 4-2 victory over No. 3 seed Wayzata in a Class 2A, Section 6 semifinal Thursday evening at St. Louis Park Rec. Center.

The Red Knights’ pressure in the first period netted in a result about halfway through. Following an offensive-zone faceoff win, the puck went directly back to junior defenseman Emma Peschel at the point. She wasted little time firing a shot on net, which left a juicy rebound.

Junior Mary Zavoral was right in front to pounce on the loose puck, burying it for her 10th goal of the season to put her team on the scoreboard. Peschel’s assist was her ninth of the year and pushed her points streak to six games. Her last name rhymes with “special,” which is what her teammates call her.

“She’s special all right,” Podein said. “She’s on the ice all the time, she’s making things happen. Even if something doesn’t happen, there’s always that threat that she’s going to do something.” 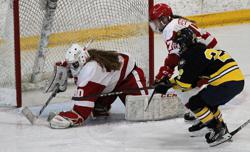 The Red Knights, ranked No. 4 in the Class 2A coaches’ poll, went into the first intermission holding the 1-0 lead and nearly outshot their opponents by a 2-to-1 margin.

Once No. 9-2A Wayzata put a few pucks on net in the second period, the Trojans generated some momentum and tied the game 1-1 about three and a half minutes in. After senior Ellie Forness put a backhand shot on net, the rebound popped over to junior forward Olivia Reem who was behind the net and stuffed the puck in on the wraparound for her fifth goal of the season.

It was the first goal the Red Knights had allowed in four games, since a pair of third-period tallies were surrendered to No. 2-2A Edina in a 2-1 loss on Feb. 25.

The Red Knights pressured early in the third period before adding some insurance. After a Lily Mortenson faceoff win in the Red Knights’ zone, senior forward Lucy Hanson got the puck and skated it right down to the other end of the ice. She got ahead of the defense and had Zavoral with her. Hanson shot the puck, beating the goaltender low, stick side for a 3-1 lead.

Podein was pleased with Hanson’s individual effort on that goal.

“That goal definitely got the momentum going for the third period for us,” Hanson said.

Less than 30 seconds later, the Red Knights found themselves on the power play. Peschel scored on the advantage, her eighth goal of the season, sniping a shot from the high slot for a 4-1 lead with 9:48 left on the clock.

Having Peschel, an Ohio State commit, play so well at either end of the ice is the consistency that her teammates see every game. They’ll joke around with her, asking her if she wants to play defense or forward, Hanson said.

“Because she can really do it at both ends of the ice,” Hanson said. “So, she’s an essential part of our team.”

The Trojans kept applying pressure to get back in the game after facing a three-goal deficit. With about seven minutes left in regulation, Wayzata got one back on a goal from senior Sophia Bach as the puck bounced around and into the net to make it 4-2.

Wayzata kept the pressure on in the closing minutes and pulled its goaltender for an extra attacker with about a minute and a half left but the Trojans weren’t able to score again.

“You could see, we did not have our A-game today, but the girls found a way to win, and they stuck to it against them,” Podein said. “It’s just a testament to our girls. I think they just never gave up against a sturdy opponent, and they got rewarded for it.”

Wayzata junior goaltender Annika Lavender made a season-high 44 saves in net. At the other end of the ice, Red Knights senior Carly Greene improved to 10-3-3 on the season, allowing two goals on 30 shots. She entered the game with a 0.91 goals-against average.

The Red Knights will either host Blake or travel to Edina for the section championship game on Saturday. It’s the first trip to the section title game in seven years for Benilde-St. Margaret’s (12-3-3), when Kelly Pannek scored the game-winner late in the third period to defeat Wayzata. Pannek is now behind the Red Knights bench as an associate coach.

The loss was the second this season for Wayzata (11-8-1) at the hands of the Red Knights.

“I’m super proud of my team,” said Wayzata coach Taylor Williamson. “They know that we don’t define success by the scoreboard at the end of the game, but the effort and the attitude that they bring the entire 51 minutes that we’re playing. They did exactly that.” 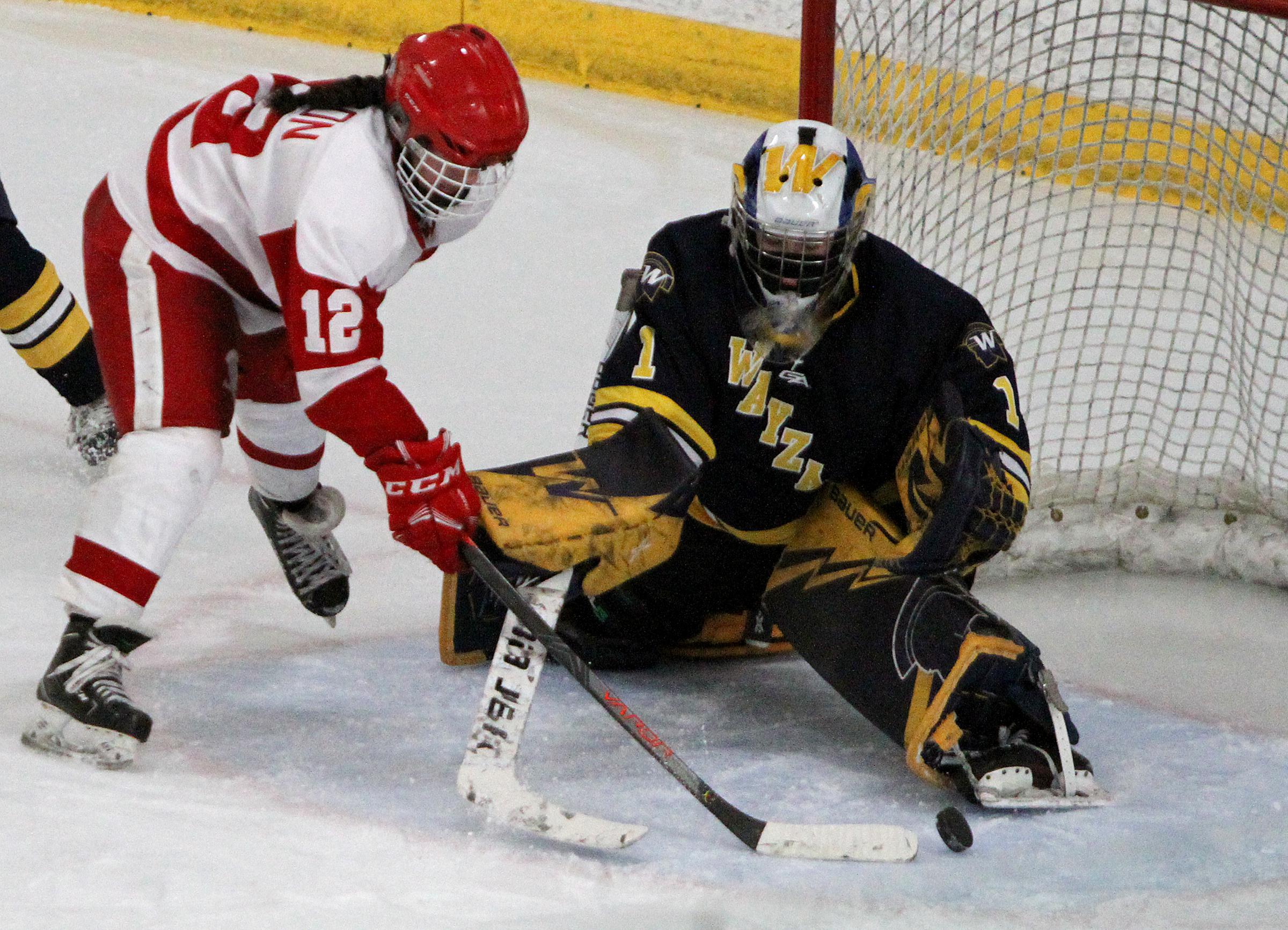 The Red Knights scored first, took a 2-1 lead into the third period and got a pair of insurance goals 1 minute, 34 seconds apart to secure the victory. Junior defender Emma Peschel scored a power-play goal and added an assist. Junior Emma Hoen had two helpers and junior Mary Zavoral had a goal and an assist.

It’s the first trip to the section title game in seven years for Benilde-St. Margaret’s (12-3-3), when Kelly Pannek scored the game-winner late in the third period to defeat Wayzata. Pannek is now behind the Red Knights’ bench as an associate coach.

In goal, senior Carly Greene stopped 28 shots for the Red Knights, who are ranked No. 4 in the Class 2A coaches’ poll, while junior Annika Lavender made a season-high 44 saves for No. 9-2A Wayzata.

Junior Olivia Reem and Sophia Bach, a senior, scored for the Trojans.

The Red Knights will either host Blake or travel to Edina for the section championship game on Saturday.

The loss was the second this season for Wayzata (11-8-1) at the hands of the Red Knights. 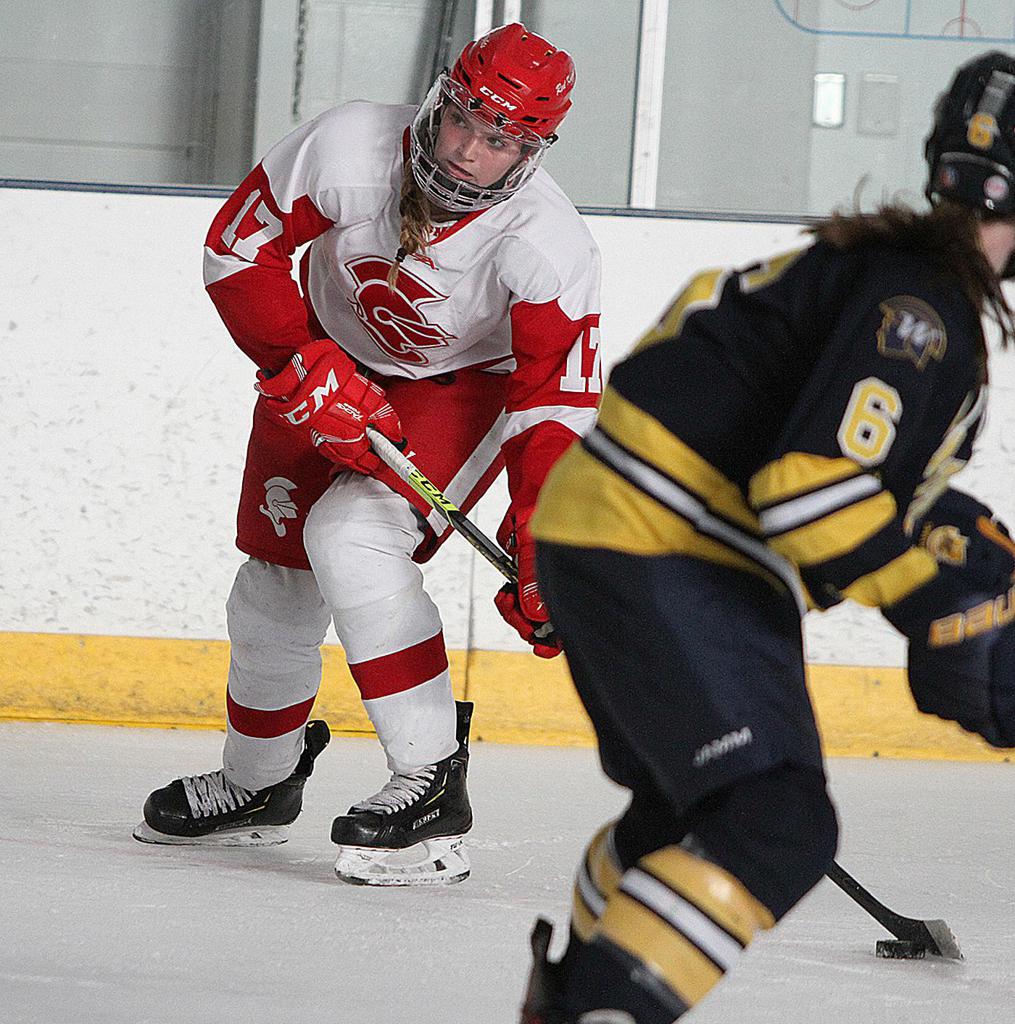