Rory Guilday and Grace Sadura each recorded a goal and an assist for the Skippers. 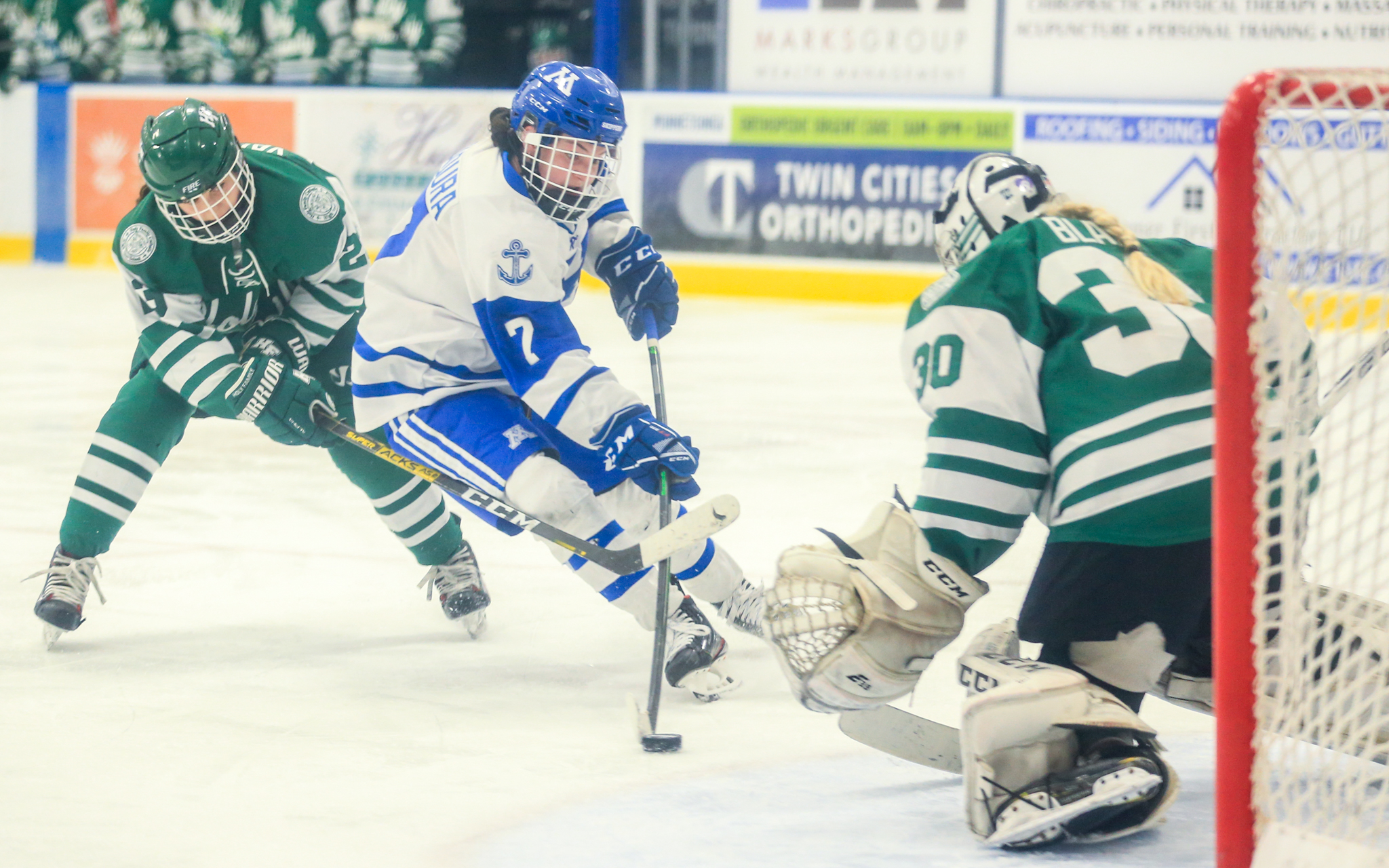 Minnetonka's Grace Sadura (7) gets off a shot for a third period goal against Holy Family Catholic Saturday evening. Sadura added an assist in the Skippers’ 4-1 victory over the fire. Photo by Jeff Lawler, SportsEngine

Minnetonka coach Tracy Cassano said the Skippers graduated the highest number of goals and points for a team in Minnesota from last year’s squad that finished third in the Class 2A state tournament. That didn’t stop the Skippers from securing their third consecutive trip to state on Saturday.

The Skippers, ranked No. 3 in the Class 2A coaches’ poll, put together a 4-1 win over Holy Family Catholic at Pagel Activity Center to win the Class 2A, Section 2 title game.

Minnetonka’s roster is far younger than it was last season, and the Skippers (15-3-3) played a complete game Saturday with a mix of senior leadership and youth leading the way.

“We’ve got a couple senior leaders that really stepped up their game for us, but kind of a young group overall and just so incredibly proud of their effort [today],” Cassano said.

The senior leaders went to work early for the Skippers Saturday. Goalie Brynn DuLac kept the Fire (13-5-2) off the scoreboard through two periods, while defenders Hanna Baskin and Rory Guilday scored the first two goals for the Skippers. Guilday was one of only two skaters in the game with multiple points, as she had a power-play goal and an assist. 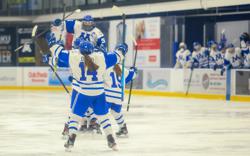 “That’s the move she does on me every single day in practice,” DuLac said, laughing. “So I’m glad it finally worked out.”

And after Holy Family Catholic forward Taylor Koeppl scored the Fire’s lone goal of the day on a 5-on-3 power play opportunity, eighth-grader Lauren Mack punched an insurance goal to make it 4-1, ensuring the Skippers’ return to the state tournament.

Sadura said every player has been fulfilling their role on the team, something that’s helped the Skippers rattle off five straight wins. It may be a different year, but Minnetonka is back in the state tournament once again and still focusing on player “Skipper hockey.”

“It’s hard to compare one year to another,” Cassano said. “Last year’s team was also incredible… This year is, I think, unique in its own way. Every year has a different look to it, but I think just coming into the year the kids are hungry.”

Despite that hunger, the Skippers are focused on taking things one game at a time. Cassano said they will see who they’re matched with in the first round of the state tourney, and their focus will be directed there. With their mix of senior leadership and young talent, a standout goalie, and their recent run of success, the Skippers feel pretty confident moving forward.

“This is pretty much a whole new squad, so we take this as a whole new year,” DuLac said. “You know, we got third two years in the past, but I know this is definitely the squad that will win state, I hope.” 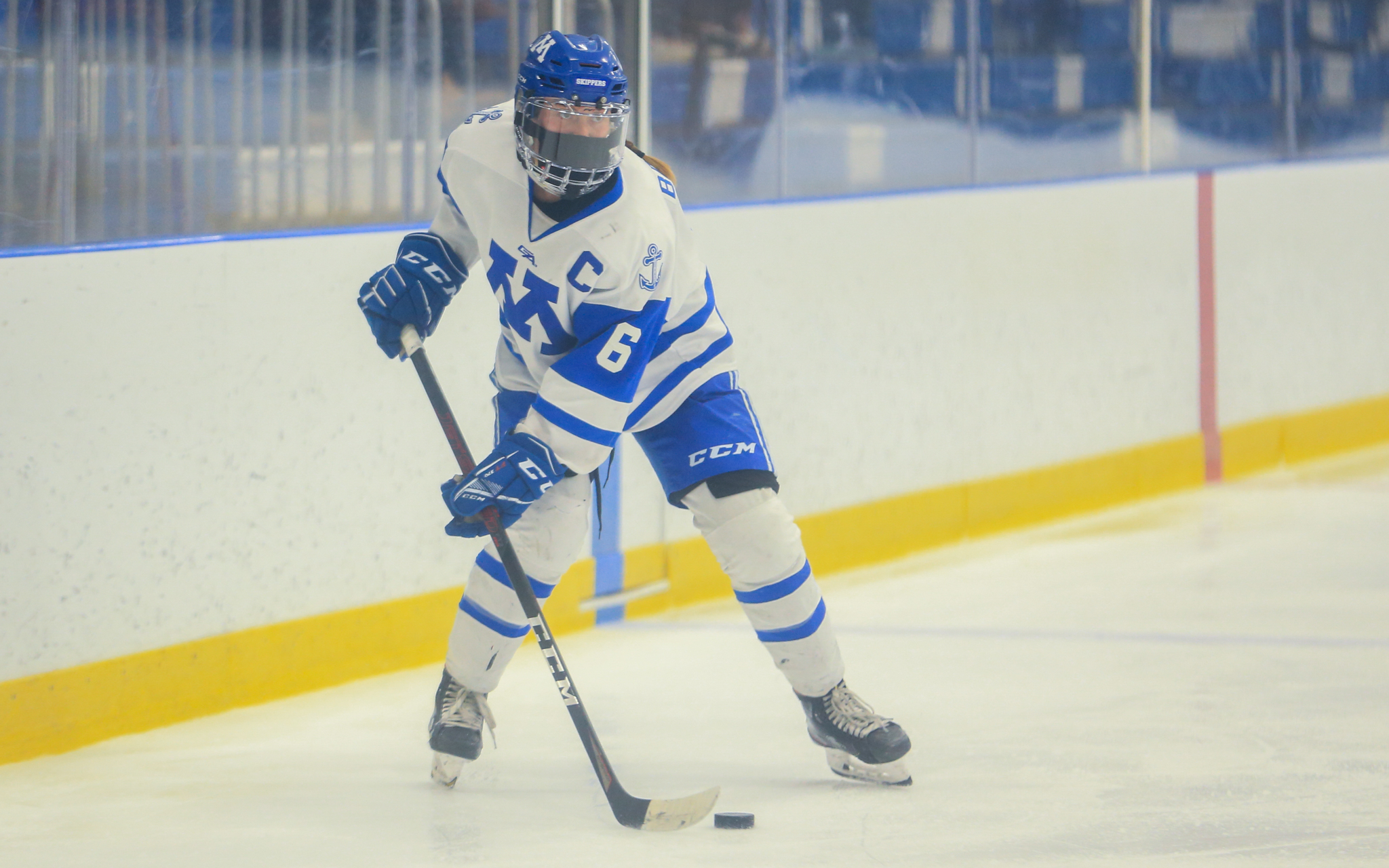 Minnetonka's Hanna Baskin (6) looks for a passing lane during a Skippers’ power play against Holy Family Catholic Saturday. Baskin opened the scoring in the Skippers’ 4-1 victory over the Fire. Photo by Jeff Lawler, SportsEngine

Minnetonka is headed to the Class 2A state tournament for the third consecutive season after knocking off Holy Family Catholic 4-1 on Saturday in the Class 2A, Section 2 championship game at Pagel Activity Center.

The Skippers, ranked No. 3 in the final Class 2A coaches’ poll of the season, struck first in the second period when senior defender Hanna Baskin’s shot was deflected by Holy Family Catholic skaters and over the head of Sedona Blair, the Fire’s sophomore goaltender.

Blair faced an onslaught of shots after that goal, as the Fire (13-5-2) picked up five penalties in the period. She faced 33 shots in the game, stopping 29.

Holy Family Catholic accumulated eight total penalties, allowing the Skippers a skater advantage for much of the second and third periods. Minnetonka (15-3-3) had six penalties of its own but outshot the Fire 33-12. Minnetonka senior goaltender Brynn DuLac finished with a .917 save percentage, stopping 11 of 12 shots.

The Skippers added two security goals in the third period to extend their lead to 3-0. Senior defender Rory Guilday sniped in a shot from inside the blue line on a power play, and sophomore forward Grace Sadura scored on a breakaway with just over 10 minutes remaining.

Taylor Koeppl, a sophomore forward, scored on a 5-on-3 power play opportunity for the Fire late in the final period.

Eighth-grader Lauren Mack scored the final goal of the contest for Minnetonka. 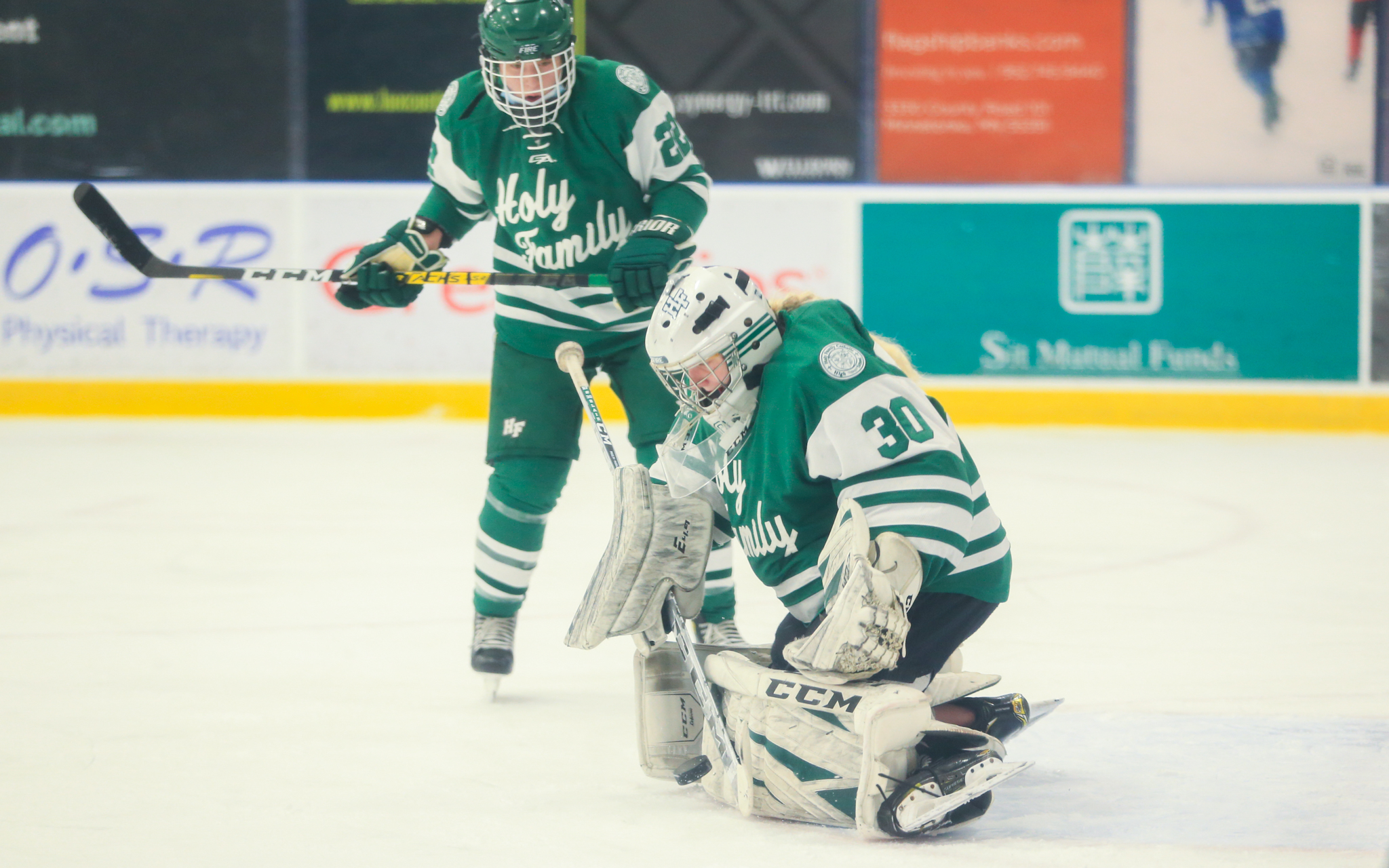 Holy Family Catholic goalie Sedona Blair (30) makes a pad save against Minnetonka in the Class 2A, Section 2 final Saturday. The Fire fell to the Skippers 4-1 in Minnetonka. Photo by Jeff Lawler, SportsEngine