Strength of schedule varied for the undefeated teams, with the defending champion Huskies having the easier go of it. The Class 1A quarterfinals are Friday, followed by the 2A games on Saturday. 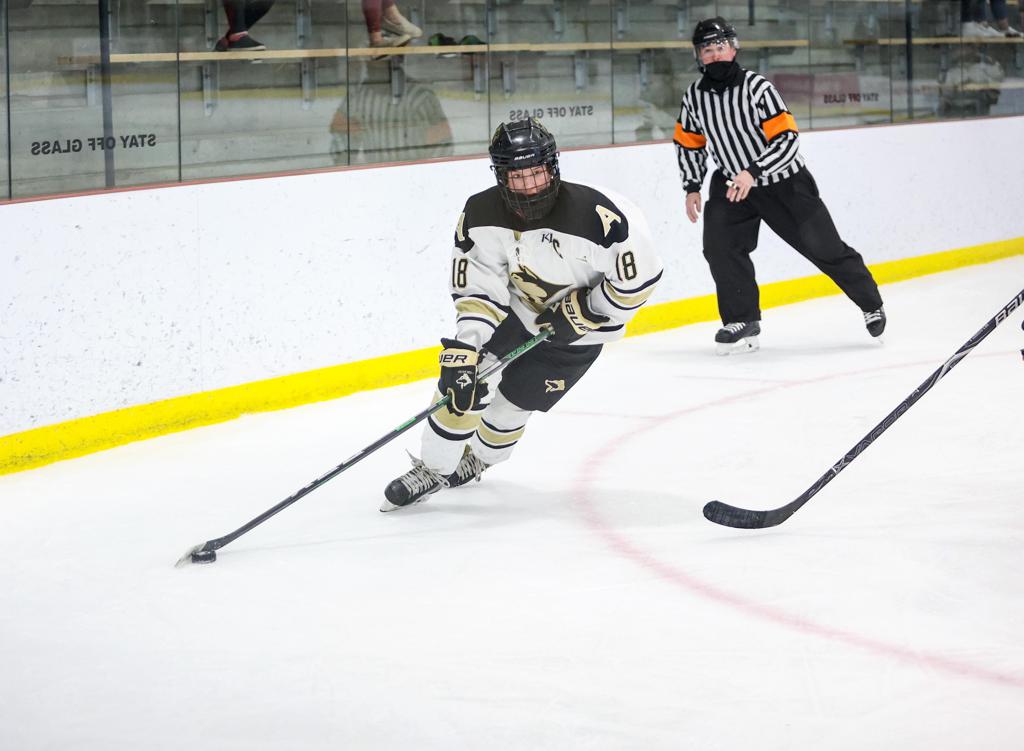 Andover's Gabby Krause, a Ms. Hockey Award semifinalist, is one of the leaders of a Huskies' team seeking to defend its first Class 2A championship, won by defeating then three-time defending champion Edina. Photo: Cheryl A. Myers, Sports Engine

For two girls’ hockey teams that are considered helmets and shoulder pads above the rest, Andover and Edina sure feel like they have a lot to prove.

The girls’ hockey state tournament quarterfinals take place Friday and Saturday at Xcel Energy before resuming next week for the semifinals and championship game. Both heavyweights are expected to return a spirited Class 2A final rematch. Andover won its first state tournament last year, and simultaneously ended Edina’s three-year run at the top, with a 5-3 victory.

Each team, which boast a combined 16 players committed to Division I hockey programs, rolled undefeated through the season and section playoffs.

The teams’ schedules were both shortened and weakened by COVID-19 precautions. Nonconference games were discouraged, which is why Andover and Edina could not open their season with a game as they had done the past two seasons. Strength of schedule became a huge obstacle for the defending champion Huskies, who outscored teams 182-7 in 20 games and fought complacency.

“The biggest adversity we’ve faced is staying focused every game and every practice to be ready for this point of the season,” said Andover coach Melissa Volk, whose team features Ms. Hockey Award semifinalists Peyton Hemp and Gabby Krause.

More tested Edina (19-0), led by fellow semifinalists Emma Conner and Hannah Chorske, bested strong opponents such as Benilde-St. Margaret’s, Hill-Murray, Wayzata and No. 3 state tournament seed Minnetonka. But the Hornets enter the state tournament wearing the unfamiliar underdog label. One they are eager to discard.

“There’s a little fire burning in the girls who were on the team last year and lost to Andover and want to come back for a little revenge,” Edina coach Sami Reber said.

Scheduled opponent Centennial, making its first state tournament appearance since 2018, received a lab-confirmed positive COVID-19 case that eliminated the team from the tournament as required by the Minnesota Department of Health and the Minnesota State High School League guidelines.

The Hornets received a bye after the league said it “considered options for a replacement team, but was unable to implement a plan.”

No-star approach
Though brimming with talent, Stillwater cannot lay claim to any Division I-committed players on its current roster. No matter. The No. 6-ranked Ponies (19-2-1) edged No. 5 Hill-Murray for the Section 4 title. Senior center Morgan Wohlers was a Star Tribune All-Metro Second Team selection. Stillwater coach Mira Jalosuo called high-scoring freshman forward Josie St. Martin “the top 2024 player in the state if not in the whole country.”

Caught between teams
Proctor/Hermantown coach Emma Stauber, a top defender for the Minnesota Whitecaps, will miss playing Friday in the Isobel Cup Playoffs in Brighton, Mass., because she will be behind the bench as the third-seeded Mirage takes on Luverne in the quarterfinals. Stauber was on the Whitecaps’ 2018 Isobel Cup Championship roster.

Production on the prairie
Sophomore forward Kamryn Van Batavia, from the southwestern Minnesota hockey outpost of Luverne, leads the state with 47 goals and 87 points. Her offseason numbers were just as impressive. Van Batavia said she shot 200 toi 400 pucks daily.