Tipped pucks among the tidbits from Thursday's semifinals at the X. 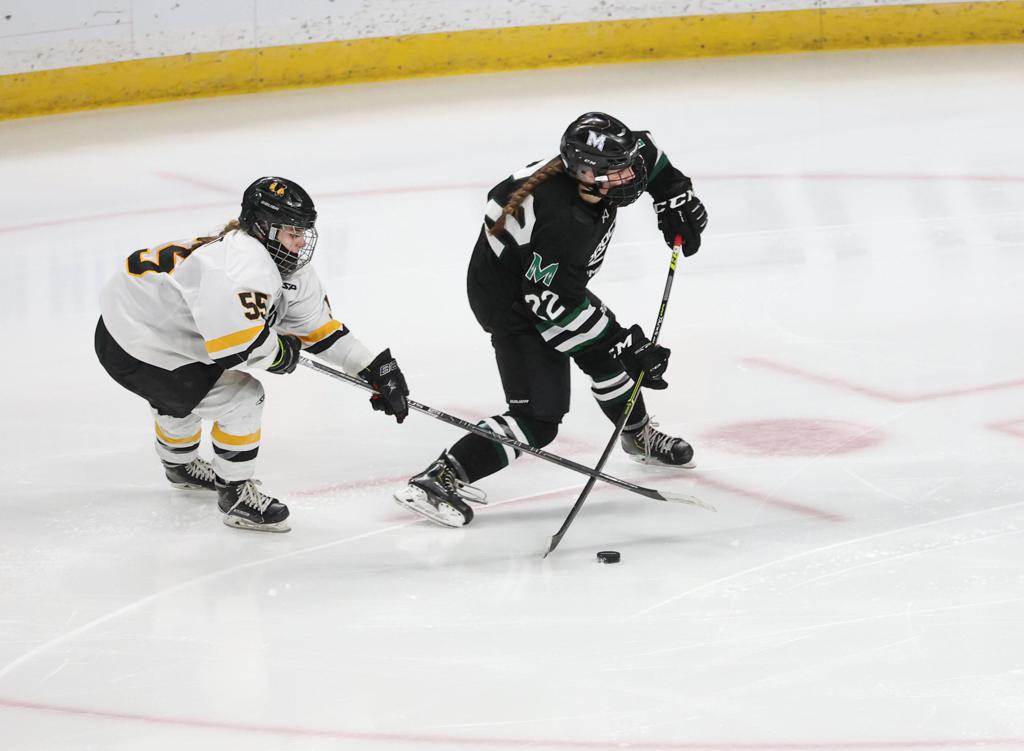 Senior forward Alyssa Watkins of Proctor-Hermantown tried to shoot the puck while being pursued by Warroad’s Lila Lanctot in a Class 1A girls’ hockey semifinal. Watkins had one goal. Photo: Cheryl A. Myers • SportsEngine

Proctor/Hermantown senior Alyssa Watkins moved from Colorado to Minnesota as a young kid. She and her family had no idea just how much the high school state hockey tournaments meant. One of the years the Hermantown boys made the state tournament, Watkins recalled someone asking her mom if they were also going to head to St. Paul to watch.

Watkins’ 23 goals and 44 points lead the team, and her sixth goal this tournament helped Proctor/Hermantown upset Warroad in the semifinals to earn the girls’ program its first trip to a state title game.

Watkins first experienced the tournament as a spectator when her brother, Tyler, played for the Hermantown boys’ team when it won back-to-back Class 1A state titles in 2016 and 2017. Tyler was one of the team’s top scorers during his senior season in 2017-18.

Saturday, Alyssa will get her shot at winning a state title. Having both experienced playing in the tournament in 2019, when Proctor/Hermantown lost 5-2 to Warroad in the semifinals, and also watching her brother, she’s shared her thoughts with her younger teammates.

“You can bring both perspectives to them and just tell them you need to cherish every moment here because you don’t know if you’ll get it next year,” Alyssa said.

Tips show growth
Edina’s commitment to tipping pucks into the net each day in practice paid off Thursday, while also showcasing the growth of skill and strength among girls’ hockey players.

Even DuLac, a finalist for Let’s Play Hockey’s Senior Goalie of the Year Award, couldn’t adjust to the sudden change in trajectory.

“If Brynn sees a straight shot,” Minnetonka coach Tracy Cassano said, “she makes the save.”

“It’s also more of a weapon because girls’ shots are so much harder and the puck really moves on a deflection,” Reber said.

Cassano, who has coached 15 seasons, said “from a young age, there are so many more opportunities for players to train and hone those type of skills.”

Gentry gets two back
Two of the three Gentry Academy players who missed the team’s state quarterfinal game were back on the ice for the Stars’ semifinal Thursday. The players were out because of a COVID-19 quarantine stemming from a positive test of a family member, according to a school official.