This time, 2A title goes to Edina with 2-1 victory over Andover 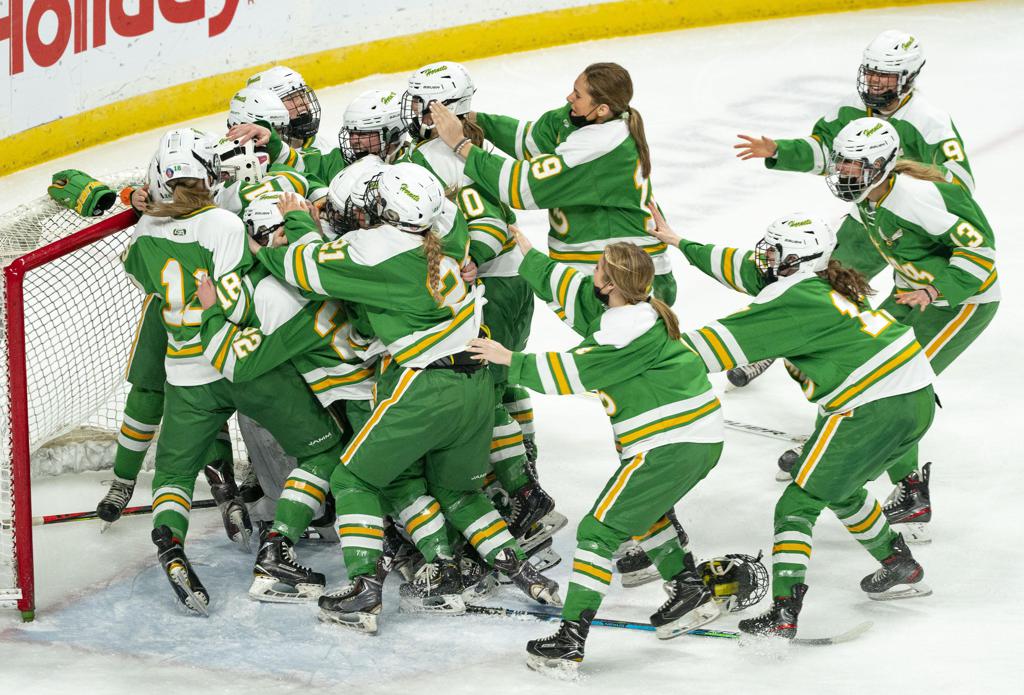 She missed the Hornets’ first three games while recovering from a broken foot, the first injury to knock her out of the net.

“It was frustrating for her,” said Corniea’s mother, Marit. “I told her ‘This can be taken away at any moment. So now, what are your goals the rest of the season?’ ”

“Get back to the Xcel Energy Center” came the reply.
Edina, anchored by Corniea, returned to the Class 2A state tournament — and left Saturday in a much better place. The Hornets, runner-up to Andover a year ago, took the rematch 2-1 for their fourth title in five seasons.

Just a sophomore, Corniea made 30 saves and captured her third championship. She won two Class 1A titles with Breck.

“It’s hard to compare them,” Corniea said. “But it never gets old.”

The No. 2 ranked Hornets (22-0) did it with defense and goaltending, defusing an Andover team that had averaged 8.8 goals per game and one that never scored less than four in a game this season.

Corniea credited the efforts of top defensive pairing Lily Hendrikson and Vivian Jungels, who logged almost as much ice time as she did.

“They don’t get the credit they deserve,” Corniea said. “But they always have my back.”

Corniea, who sharpened her hand/eye coordination as she rehabilitated her foot, needed all of her tools early against No. 1 ranked Andover (22-1). The Huskies outshot Edina 16-2 in the first period but could not best Corniea.

“They played us great defensively,” Huskies coach Melissa Volk said. “We dominated that first period, but we couldn’t bury our chances.”

“It was comforting to know I was able to keep them from scoring,” she said. “It was kind of nice to see all those shots and get into the game.”

Edina supported her with a pair of second period goals. Berit Lindborg put the Hornets ahead 1-0 — putting Andover behind for just the second time all season — with a goal off teammate Jane Kuehl’s faceoff win.

The defending champs didn’t stay down for long. Less than two minutes later, Gabby Krause evened the score with her 26th goal of the season.

Hendrikson go-ahead goal at 5:45 off a rebound owed to a burst of great net pressure.

Andover had outscored its opponents 193-7 before Saturday. But Corniea wasn’t fazed. She overcame injury and every opponent she faced all season.

“She’s a fighter, a competitor,” Marit said. “It wasn’t fun for me to watch, but she was having fun out there.”

1. Uma Corniea, Edina, sophomore goalie
She stopped all 16 Andover shots in the first period and 30 of 31 for the game to seal the Hornets’ fourth state title in five years and the third of her career.

2. Lily Hendrikson, Edina, senior defense
One of Edina’s captains, she scored the game-winning goal while helping hold Andover (8.8 goals per game) to its lowest output all season.

3. Gabby Krause, Andover, senior forward
Andover, trailing for just the second time all season, drew even thanks to Krause’s deft hand near the Edina net. She finished her season with 26 goals.

Edina edged defending champion Andover 2-1 for the Class 2A championship Saturday at the Xcel Energy Center.

The No. 2 ranked Hornets (22-0) did it with defense and goaltending, defusing an Andover team that had averaged 8.8 goals per game and one that never scored less than four in a game this season.

No. 1 ranked Andover (22-1) had been the only team to defeat Edina the past two seasons, including last season’s championship game. But the Hornets, playing in their fifth consecutive championship game, won their fourth state title in that run.

Edina supported its netminder with two second period goals. Berit Lindborg put the Hornets ahead 1-0 – and Andover behind for just the second time all season – with a goal off teammate Jane Kuehl’s faceoff win.

The defending champs didn’t stay down for long. Less than two minutes later, an Ella Boerger pass toward the Edina goalmouth became a goal thanks to Gabby Krause’s defy stickwork.

The 1-1 tie didn’t last long, either. A swarm of Hornet forwards circled the net, passing and chipping puck until a rebound popped free for a Lily Hendrikson go-ahead goal at 5:45. Her goal was Edina’s second on eight shots.

Andover had outscored its opponents 193-7 this season.