Find out who made the list in both classes, plus the honorable mentions. 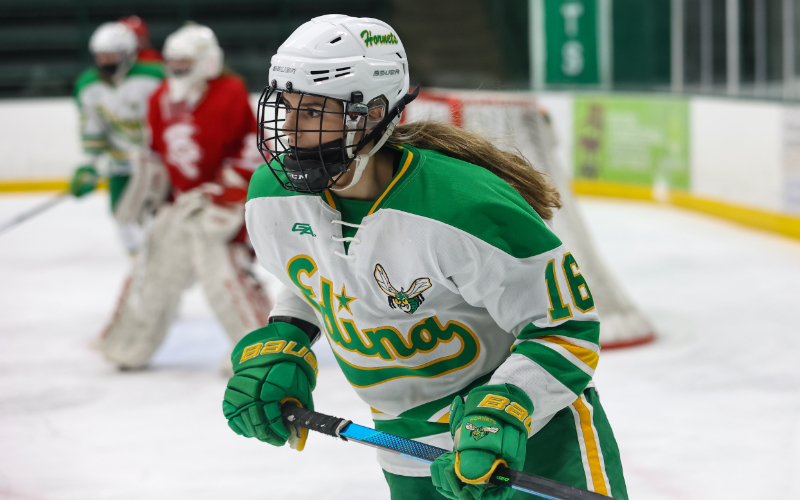 Edina's Emma Conner skates in a game against Benilde St. Margaret's on Feb. 25. Conner was one of four Hornets to make the 2021 Class 2A all-state team. Photo by Cheryl A. Myers, SportsEngine

Bolstering the program’s 2021 Class 2A state championship, Edina showed up in the Minnesota Girls Hockey Coaches Association's Class 2A all-state team list which was released Saturday. The Hornets program boasts four players — the most of any team in either class — on the all-state list, with an additional player as an honorable mention.

Also in Class 2A, both Minnetonka and Andover followed suit with three players making all-state, including Brynn DuLac, the 2021 Senior Goalie of the Year, and Andover’s Peyton Hemp, the state's 2021 Ms. Hockey award winner.

Goaltenders joining DuLac on the Class 2A list are Edina’s Uma Corniea, Blaine’s Hailey Hansen and Prior Lake’s Alexandra Pellicci. Corniea backstopped the Hornets to the state championship with a 16-0 record and a 0.87 goals-against average. Hansen won 11 games this season and had a .924 save percentage, while Pellicci had a .920 save percentage and one shutout.

Grand Rapids-Greenway lost in the Class 2A, Section 7 championship game to Andover, but had two players make this list. Claire Vekich, the fifth leading scorer in the state with 62 points in 21 games, made the list along with her eighth-grade counterpart, Mercury Bischoff. Bischoff was the only eighth-grader to make either the all-state or all-state honorable mention list. She wasn’t far behind Vekich in the state scoring race with 56 points in 20 games this season.

In Class 1A, each of Breck, South St. Paul and Warroad saw three players each make all-state this year. Geno Hendrickson, the fourth-leading scorer in the state with 30 goals and 34 assists this season, was one of Warroad’s three representatives, with Talya Hendrickson making the honorable mention list.

The state’s leading scorer this season, Kamryn Van Batavia, made an appearance for Luverne on the Class 1A honorable mention list. Van Batavia finished the year with 87 points in 21 games played.

Click through the tables below to see who else received honors.