The Ponies scored two goals in the second period while goaltender Timmons made 23 saves in the third period. 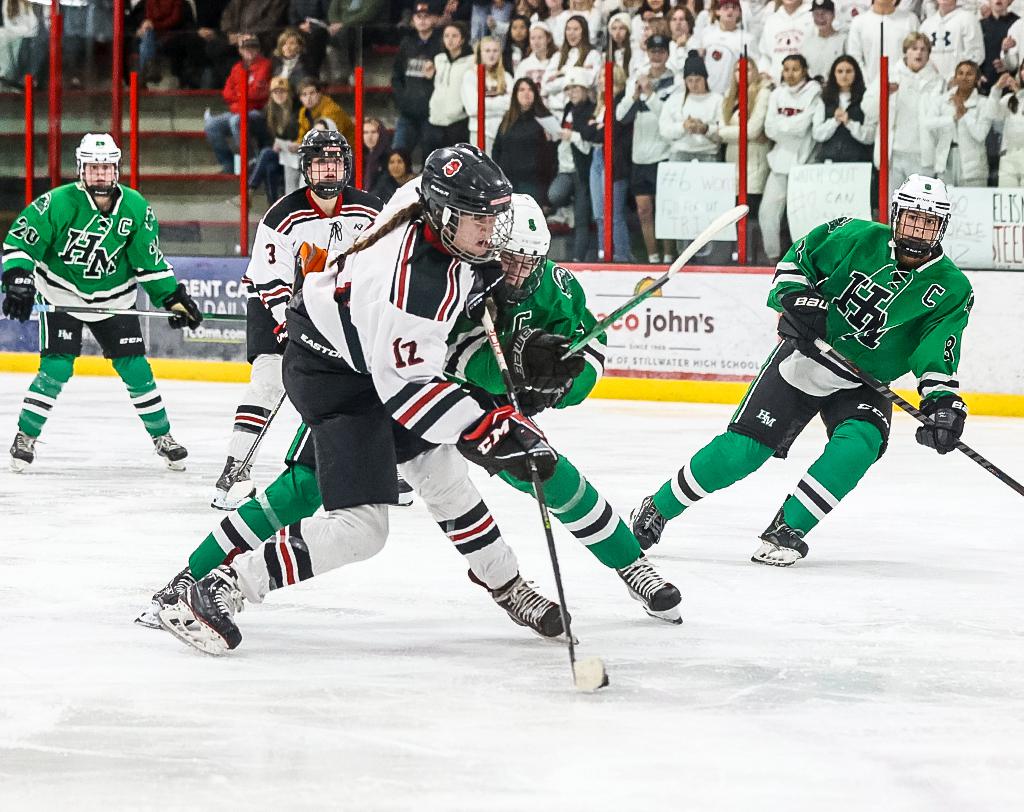 Sophomore Brooke Nelson (12) scored Stillwater's first of two second period goals. The Ponies held on for a 2-1 win over Hill-Murray in a rematch of last year's Section 4-2A final. Photo by Cheryl A. Myers, SportsEngine

Rarely does the first game in a season mean much more than an afterthought when the high school postseason starts months later.

But Friday’s game between Stillwater and Hill-Murray featured two probable contenders in Class 2A, Section 4. And the season opener for both teams did not disappoint.

Stillwater ended rival Hill-Murray’s season in the section title game last March, clinching a spot in the state tournament with a 1-0 win. Friday, the Ponies started the winter schedule with a 2-1 victory thanks to second-period goals by sophomores Brooke Nelson and Addison Finn. 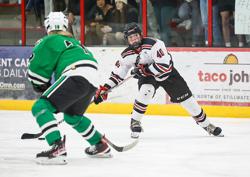 Both teams played fast-paced hockey Friday, and the Ponies’ win appeared to mean more than most other November non-conference games.

“It’s always a big game,” said Nelson, who also scored the game-winner for Stillwater in last March’s section championship game. “They are one of our biggest rivals, and I think playing them, the energy is always high before the game. We all always come ready to play.”

Clinching the victory was not easy. Hill-Murray led in shots 23-9 in the final period, including multiple power-play chances from four Stillwater penalties.

“I think Lily was a really big factor in that,” Nelson said about the third-period stand. “She held us up. She played one of the best games I’ve seen her play. I think as a team, we kept grinding.”

With only five seniors on the roster, the Ponies will rely on contributions this winter from young players. Many of them are returning after playing significant roles on last year’s state tournament team.

“I would say we are very similar to last year, but the younger girls are a year older, so that makes a difference,” head coach Mira Jalosuo said.

Many of the players from the Stars were in attendance Friday, getting a firsthand look at other section opponents. If adding a team like Gentry Academy makes the section field a bigger challenge, Stillwater is ready.

“I love it. I love to play top opponents,” Jalosuo said. “If you look at our non-conference games, we are playing the top teams in the whole state. So it’s the same thing in the section. If you want to win the state, you have to play the best teams.” 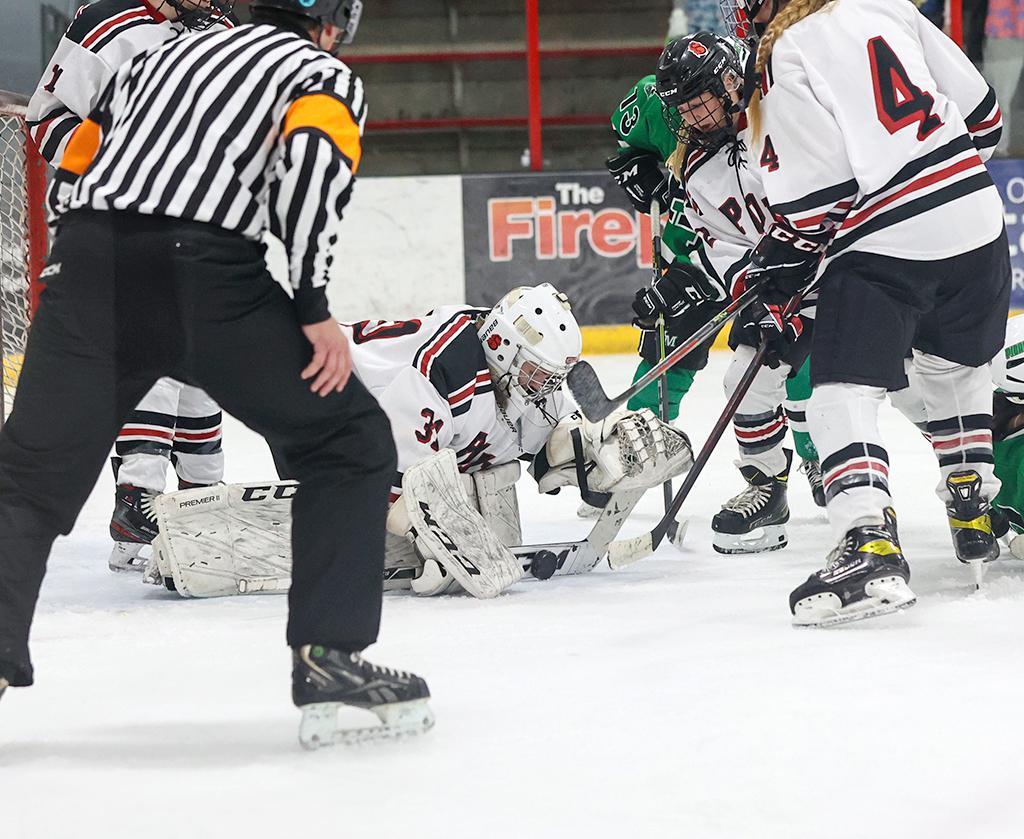 Stillwater goaltender Lily Timmons covers the puck late in the third period. Timmons' 43 saves helped lead her team to a 2-1 win over Hill-Murray on Friday night. Photo by Cheryl A. Myers, SportsEngine

A strong second period of offense propelled Stillwater to a 2-1 victory in a fast-moving game with Class 2A, Section 4 rival Hill-Murray at the St. Croix Rec Center in Stillwater Friday.

Brooke Nelson and Addison Finn each scored second-period goals to give Stillwater (1-0) a one-goal lead that would stand the rest of the game.

Hill-Murray (0-1) built an early 1-0 lead when Ella Hornung scored a power-play goal in front of the Ponies' net in the first period. But the Pioneers were shut out the rest of the way despite leading in shots for the game 44-32.

Stillwater goaltender Lily Timmons made 43 saves in the winning effort, including 23 in the third period to preserve the victory. Hill-Murray's Taylor Anderson made 30 saves. 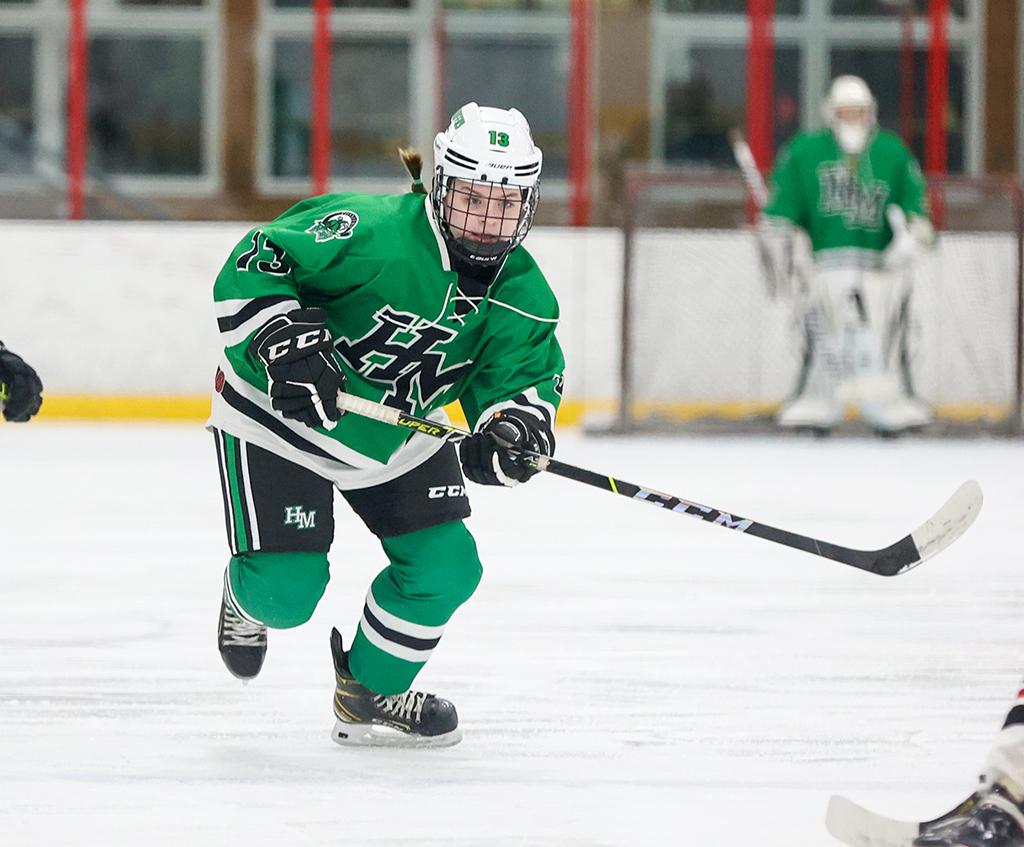