The Huskies pressured the Stars throughout Thursday’s game that featured two of the state’s top teams from a season ago. 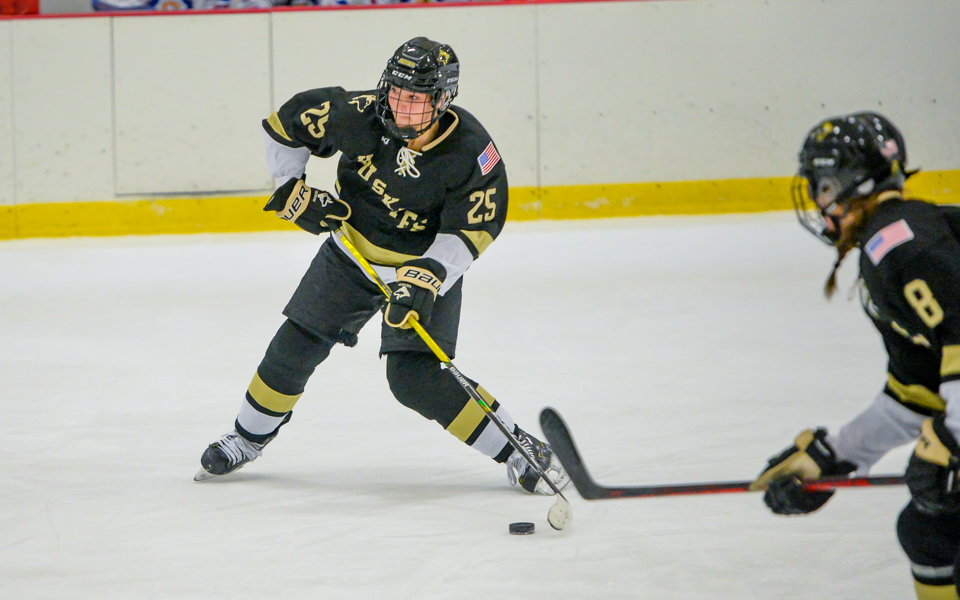 The Huskies’ Courtney Little scores the first goal Thursday night as the Huskies go on to defeat the Stars' 5-1 at the Vadnais Sports Center. Photo by Earl J. Ebensteiner, SportsEngine 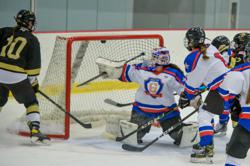 For those who have watched Andover girls’ hockey in recent years, there are not a lot of familiar names from past teams.

Despite the change in personnel, the Huskies have looked like the powerhouse it has turned into in recent years. Andover is off to a perfect 3-0 start. The Huskies’ latest triumph came in a 5-1 win against Gentry Academy at Vadnais Sports Center on Thursday.

The 2021 state final marked the end of an era of sorts for Andover girls’ hockey. Led by a crew of players, including 2021 Ms. Hockey winner Peyton Hemp, the Huskies won the Class 2A state championship in 2020 and finished second in 2021.

After that game, the turnover of the Andover roster began. A large-scale departure happened. Players left for various reasons, including graduation and transferring to a different school. The result: A 2021-22 Husky roster with a bevy of newcomers and youth. The current Andover roster has just six returning skaters from last year’s team.

The good news for Andover coach Melissa Volk and Andover was the incoming group of freshmen was a group that had its own success to bring to the table. They won the 15U-A state championship this Spring.

With a new group, the Huskies, ranked No. 1 in the latest Class 2A coaches’ poll of the season, were tasked with getting them ready to play at the varsity level and do so quickly. Andover’s first three games included No. 5-2A Benilde-St. Margaret’s, No. 3-2A Minnetonka and the No. 8-2A Stars.

“We knew we were going to have to work every game of our schedule,” Volk said. “You just have to get that experience.”

Much like the Huskies (3-0), Gentry Academy has some newfound challenges this season. After competing as a Class 1A school, the 2021 Class 1A runner up has made the leap to Class 2A. So far, the Stars (1-2) have taken some lumps while making the move.

Gentry Academy’s biggest hit taken on Thursday came when going up against the Andover power play. The Huskies finished the night two-for-five on the power play and added a shorthanded goal. Andover balanced out that attack as five different players registered goals.

Andover found its offensive success with an onslaught of shots toward Stars junior goaltender Zoe Laming, who stopped 25 of 30 shots in the loss.

One of those goals on the power play came from freshman defender Courtney Little. Though she was a big part of what Andover did on Thursday, she’s one of the Husky newcomers. It showed after the game when she held onto the puck from that goal. It was her first varsity goal.

“We always want to get the puck to the net and get those dirty goals,” Little said.

The puck-to-the-net mentality, along with all of the special teams play led to Gentry Academy picking up some odd-man chances. Nearly every one was stopped by the Andover defenders covering for any mistakes. So too did Husky goalie Courtney Stagman, who stopped all but one shot she faced in the win.

This new-look Andover squad’s next challenge comes on Tuesday against Forest Lake. Though the Rangers are not ranked in the top 10 of Class 2A, they are a consistent thorn in the side of the Huskies when it comes to the Class 2A, Section 7 tournament. It’s another step along the way for a young squad.

“It’s been fun so far,” Volk said. “People want to compare us to the team from the last few years. You can’t compare them. We have completely different personnel.” 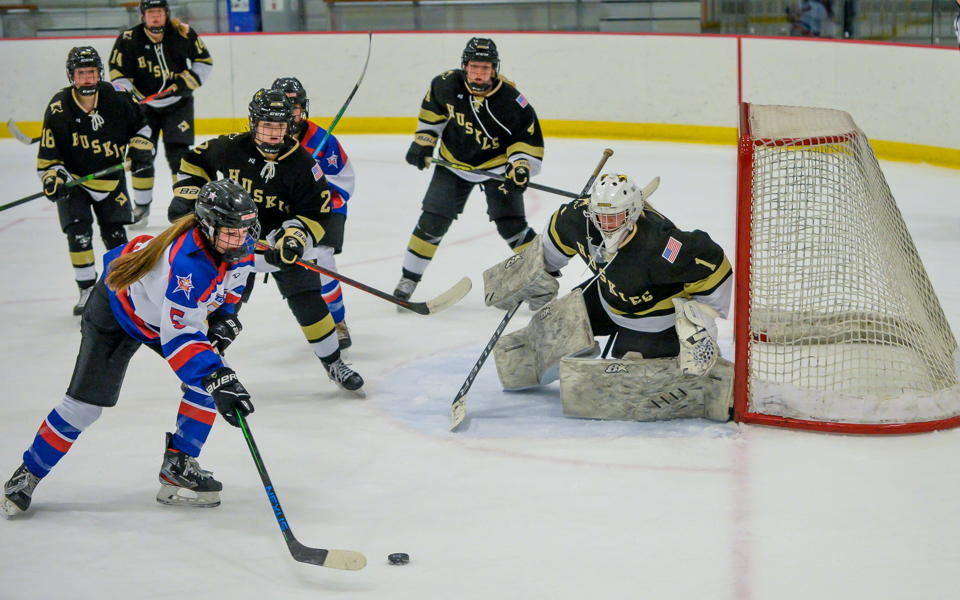 In a battle of teams that each finished second at the 2021 girls’ hockey state tournament, Andover took it to Class 2A newcomer Gentry Academy as the Huskies rolled to a 5-1 victory on Thursday at the Vadnais Sports Center.

Andover (2-0) spent much of the first period in the offensive zone and produced 14 shots on net, including two goals. Courtney Little started off the game’s scoring with a power-play tally in the first. Each of the five Husky goals were scored by different players.

Little’s goal was one of three that came on special teams. Two came on the power play while the Huskies also netted a short-handed goal. Andover is ranked No. 1 in Class 2A in the first Class 2A coaches’ poll of the season.

Madison Brown and Little were the leading-point getters on the night for Andover with each earning a goal and an assist.

Gentry Academy (1-2) got its lone goal of the game on the power play. Junior forward Grace Delmonico scored the lone goal for the No. 8-2A Stars.

Though Gentry Academy had just one goal on the board, the Stars pressured Andover goaltender Courtney Stagman, who stopped 16 of 17 shots in the win.

Stars goaltender Zoe Laming faced 30 shots in Thursday’s loss and stopped 25 of them. 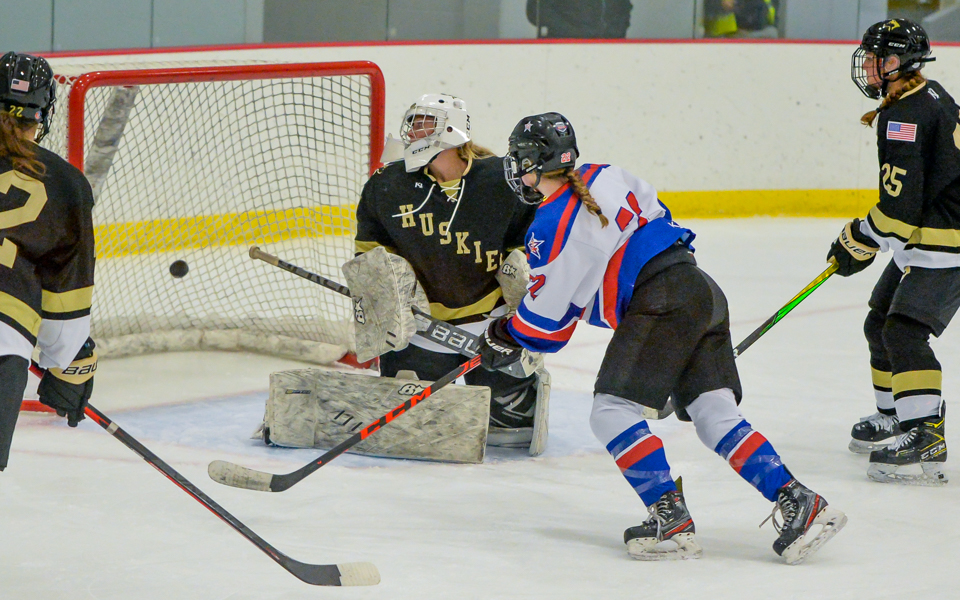 Grace Delmonico scored the Stars' lone goal in the second period. The Stars' lost to the Huskies 5-1 at home. Photo by Earl J. Ebensteiner, SportsEngine