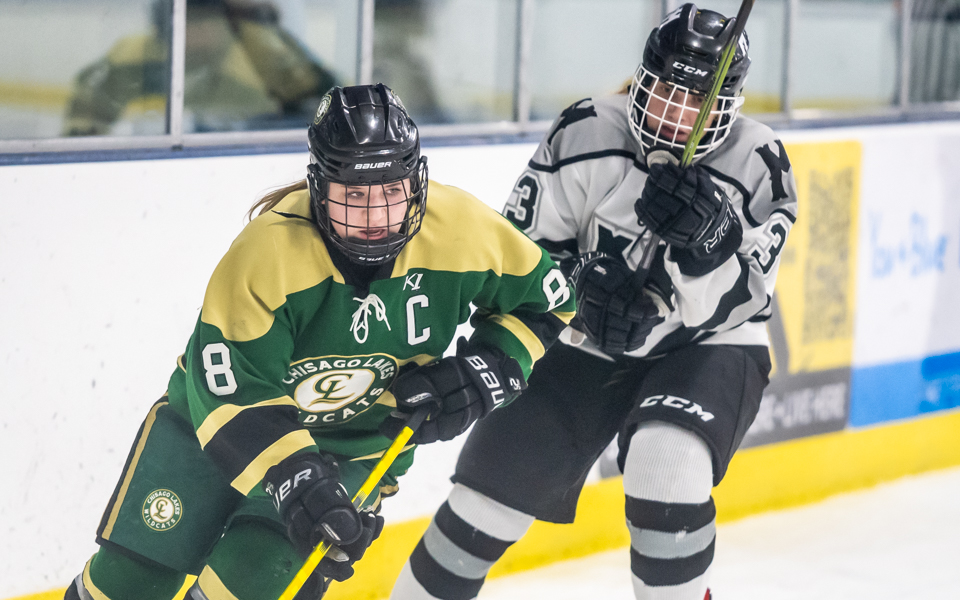 Danielle Burgen (8) of Chisago Lakes picks up a hat-trick while scoring the winning goal Thursday night as the the Wildcats defeat the Storm 4-3 in overtime at the Parade Ice Garden. Photo by Earl J. Ebensteiner, SportsEngine

Parade Ice Garden has not been a festive place for Chisago Lakes girl’s hockey in the past. From 2016-19, the Wildcats saw their season end at the rink in Minneapolis in the Class 1A section playoffs. They never made it past the section semifinal.

All the more reason why an early-season game against Minneapolis on Thursday night at Parade was so important for Chisago Lakes coach Dave Burgen. He talked about the history with his team before the game, wanting to finally get a victory at the venue was used as motivation. 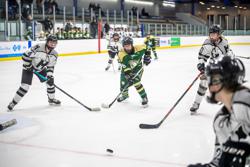 The Wildcats responded with a 4-3 overtime victory when senior forward Danielle Burgen, Dave’s daughter, scored the winner with three minutes, thirty seconds left in the extra session to complete her hat trick.

“To get this victory in overtime was huge for our confidence,” Dave Burgen said. “It was big for us mentally knowing that, ‘Hey, this is a place that we can win at and move on.’”

The players knew how much it meant to their coach, too.

“It was just good to see a smile on his face, most of all,” said senior Rilee Winters, who had the game-winning assist.

The Wildcats had to come back from a pair of one-goal deficits Thursday, and then respond after Minneapolis tied the game late in the third period. In overtime, the Wildcats had all the scoring chances, finally cashing in on their fifth shot.

Winters got the puck near the blue line and waited for her teammates to get back onside. Burgen touched up and drove down the other side as Winters slid a perfect cross-ice pass over to her teammate. Burgen wasted no time on the shot.

Did Winters know Burgen would cash in?

“For sure,” Winters said. “She always buries them.

“I always work well with Dani. We always look eye-to-eye, and then right away you just know, you can feel it coming.”

Fresh off her six-goal effort in a 14-6 win over Mahtomedi, captain Burgen bumped her team-leading goal total to 14 and boasts a team-leading 20 points.

Burgen wasn’t the only one with a hat trick. Minneapolis junior forward Celia Midtbo scored all three goals for her team, giving her a team-leading five tallies for the season. Two of them came on the power play; Minneapolis (0-4-1) went 2-for-6 with the advantage. Midtbo gave her team 1-0 and 2-0 leads before also tying the game with 3:34 seconds left in regulation with another shot from the circle on the power play.

Chisago Lakes junior Tianna Ritter started this season on JV before being brought up full time to varsity before the last game. After scoring her first varsity goal against Mahtomedi, Ritter jammed home a rebound on the side of the net Thursday to get Chisago Lakes on the board in the second period.

Burgen’s first goal tied the game in the second period at 2-2 before a power-play goal in the third put the Wild cats ahead.

The Wildcats victory improved their record to 3-4. They’ve had a couple of bounce-back games after starting the season on a three-game skid. But although Chisago Lakes made the state tournament last spring, this year is a different squad – most notably because it graduated seven seniors.

“I think we needed to kind of find our identity a little bit,” coach Burgen said. “And girls need to find what role they’re going to fit into. When you lose seven seniors like that, our dynamic’s different, and so I think we’re starting to grow into the team who we know we can become. But it’s a learning process, and that’s what we were going through a little bit.”

Some of that dynamic shift involved line juggling. Last season, the bulk of the scoring came from Danielle Burgen, Danielle Brunette (a senior this year) and Jenna Lawry, the Wildcats’ leading scorer last year now playing for University of Minnesota Duluth. This year, “the two Danis” started on the same line together with Kayla Bluhm. But as opponents keyed in on them, it hindered their production.

So, they started rotating the Danis at center with various sets of wings to try and keep opposing defenses guessing. Danielle Burgen is confident she and her teammates are coming together more each day they play.

“Coach said something about ‘we don’t really care who we’re playing with, because we’re a team,’” Danielle Burgen said. “So we just play with our teammates. No particular people. And we just get our jobs done, and everyone plays the role that they need to do.” 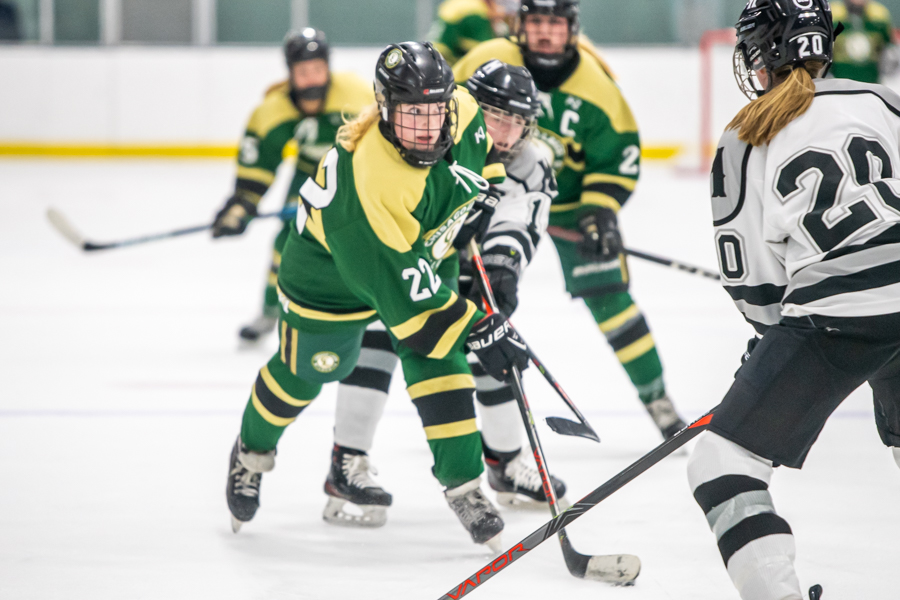 Senior Danielle Burgen scored the overtime winner with 3:30 left in overtime to complete her hat trick and give Chisago Lakes a 4-3 win over Minneapolis on Thursday night at parade Ice Garden.

For Minneapolis, junior forward Celia Midtbo scored all three goals for her team, giving her a hat trick as well.

The Wildcats (3-4), ranked No. 9 in Class 1A by Let’s Play Hockey, started the season on a three-game skid before winning three of their last four games, including a 14-6 rout of Mahtomedi on Tuesday. 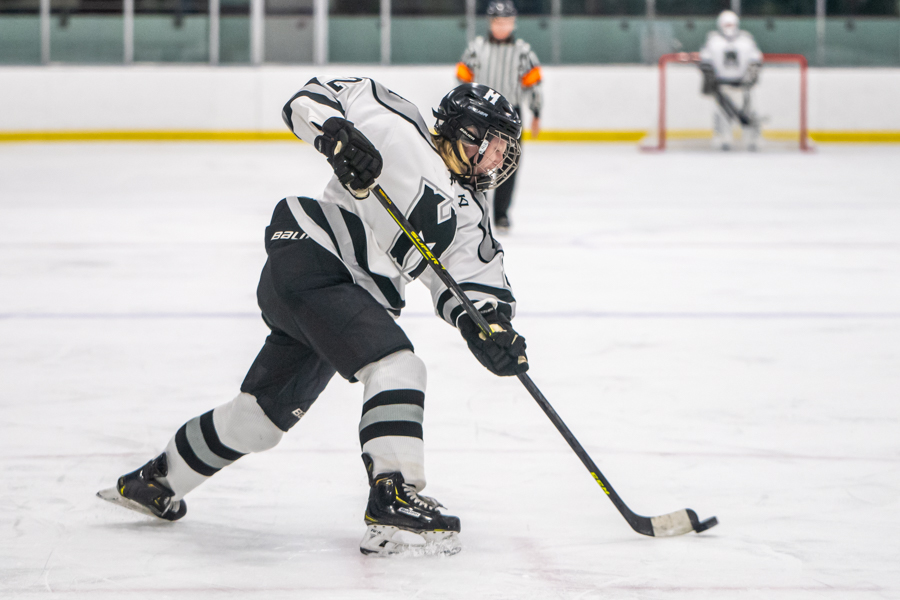 Scoring the tying goal in the third period and picking up a hat-trick Thursday night is the Storms’ Celia Midtbo. Minneapolis lost to Chisago Lakes 4-3 in overtime. Photo by Earl J. Ebensteiner, SportsEngine