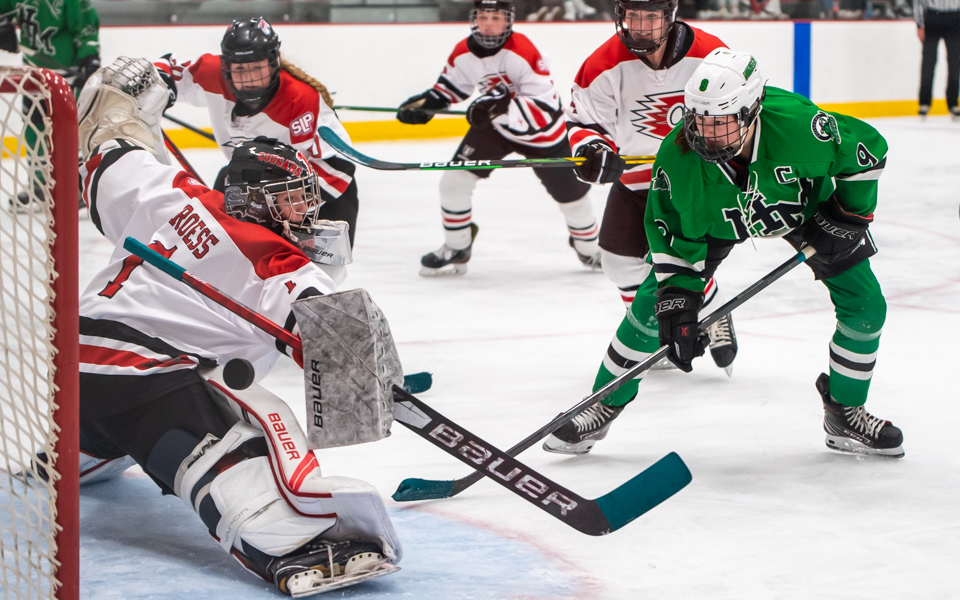 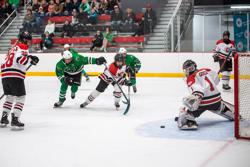 Six of Hill-Murray’s nine wins this season are shutouts behind the duo of sophomore Grace Zhan and senior Taylor Anderson. Though Thursday’s game didn’t end in a shutout, it came close as Anderson got the nod in net.

She made 14 saves, but there was one play that stands out from the 3-1 Hill-Murray victory over Centennial/Spring Lake Park at Centennial Sports Arena.

“Well, there was the crossbar in the third period. That was a ‘Merry Christmas’ gift for me,” Anderson said with a laugh. “I didn’t know where the puck was, so I just didn’t move my feet because I figured it was somewhere.

“It could’ve gone the other way very easily.”

Momentum was on the Pioneer’s side with that crossbar-aided save on a shot from Noelle Hemr a few minutes into the third period. Instead of tying up the hockey game at two goals apiece, about a minute later Hill-Murray went down and took a 3-1 lead to grab momentum back once again before skating to victory.

Both teams found a few solid scoring chances in the second as well, with solid saves from each goaltender. A little more than 10 minutes into the period, Hill-Murray’s Chloe Boreen walked in alone toward the Centennial goal. Her shot required a point-blank save and then a scramble as Groess searched for the puck around her crease. The whistle blew, ending the scoring chance for the Pioneers.

The Cougars tied the game only 17 seconds later,

Junior forward Callie Cody came in off the rush and fired the puck on net as she skated by the crease. Cody immediately came back to the front of the net and pounced on the rebound, burying it for her sixth goal of the season.

The Cougars goal ended the Pioneers’ collective shutout streak at 142 minutes, 38 seconds. It spanned three games, starting with Anderson in goal for a 5-0 win against North St. Paul on Dec. 17 and Zhan earning the win with a 3-0 decision against Cretin-Derham Hall in the previous game. Having a pair of goalies going every other game is “every coach’s dream,” said Hill-Murray coach Shawn Reid, who is in his first season with the program after coaching at Blake.

Zhan’s .968 save percentage ranked second in the state to go with her 0.78 GAA ranking third. Anderson is 5-2-0 this season. Each goalie has three shutouts.

“We have a lot of girls that also block shots, and that helps out our goalies a lot, too,” Hornung said. “Our goalies are also really good. It’s nice to know that they’re back there to help us out.”

Tied 1-1 head into the third period, the Pioneers went to the power play early on. Once again, Hornung cashed in, finishing a bang-band play with a rebound right in front of the net for her sixth goal of the season.

“She’s a very offensive-minded player, so she can see the ice really well on the offensive side, and she took advantage tonight,” Reid said.

It capped a 2-for-2 night on the power play for Hill-Murray as well. Though they don’t work on the power play too much, Reid said, opting for a “next line up” mentality to create opportunities. It worked out Thursday, to go along with the rest of the team’s efforts.

“We stayed with it the whole game, which is what I like to see,” Reid said. “I think we played a full three-period game. What I liked most is that we were really tenacious.”

The Pioneers (9-3-0) are on a six-game winning streak, outscoring opponents 25-4 in that stretch. They’ve won 9-of-10 games this season after back-to-back losses against Stillwater and Wayzata to start the year.

Cougars sophomore goaltender Kaitlin Groess came into the game having allowed only 13 goals in her second year as a starter. She made 20 stops Thursday as the Cougars (9-2-1) saw their four-game winning streak to come an end. 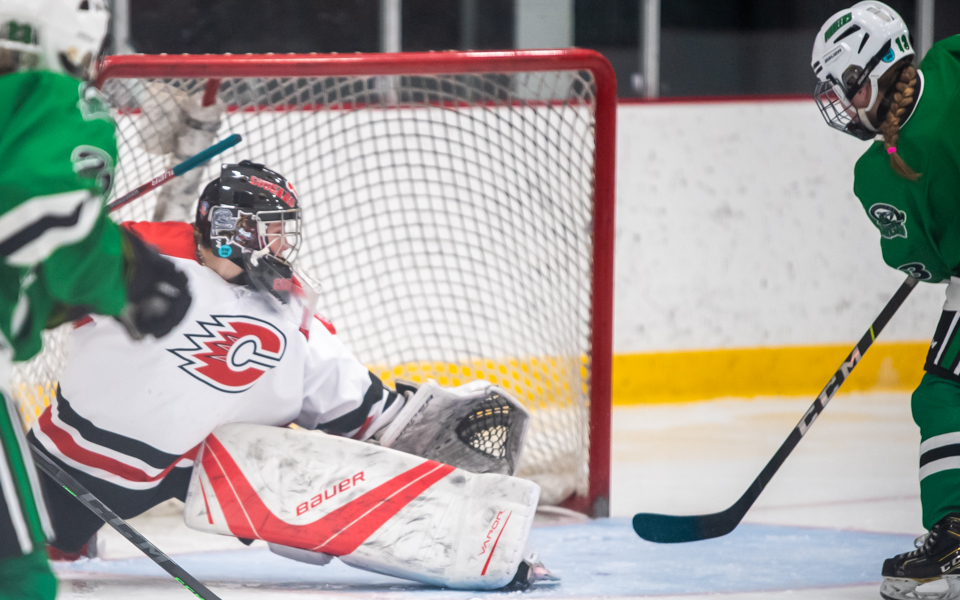 Hill-Murray freshman Ella Hornung scored a pair of power-play goals, including the go-ahead goal in the third period to help her team to a 3-1 victory over Centennial/Spring Lake Park on Thursday at Centennial Sports Arena.

In a game between opponents who each average at least three goals per game and allow a little more than a goal per game, a defensive battle and low-scoring affair could almost be expected. The Cougars came into the game allowing 1.36 goals per game to Hill-Murray’s 1.27 goals per game.

Sophomore Kaitlin Groess, who ranks in the top-10 in the state in goals-against average and save percentage, made 20 saves for the Cougars. Senior goalie Taylor Anderson got the start for the Pioneers and made 14 saves for her fifth win of the season.

The Pioneers (9-3-0) are on a six-game winning streak, outscoring opponents 25-4 in that stretch. Six of their nine wins this season are shutouts. They’ve allowed only two goals in the past five games. They’ve won 9-of-10 games this season after back-to-back losses against Stillwater and Wayzata to start the year.

The loss for Centennial (9-2-1) snaps its four-game winning streak. 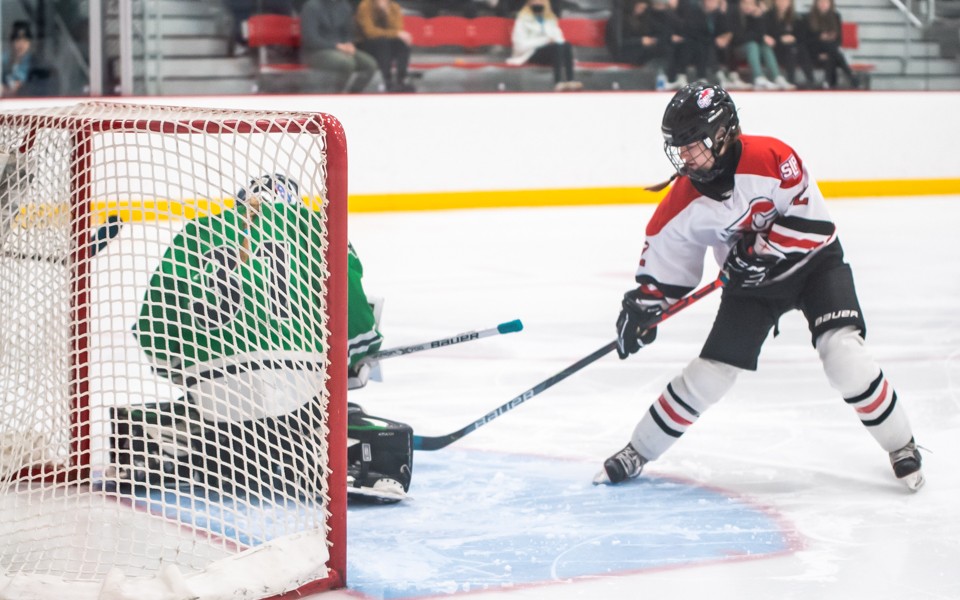