Marvin family's teachings go beyond hockey, and the message is heard far from Warroad

The Max Foundation, established after Max Marvin died by suicide, is spreading the word on helping young people with mental health. 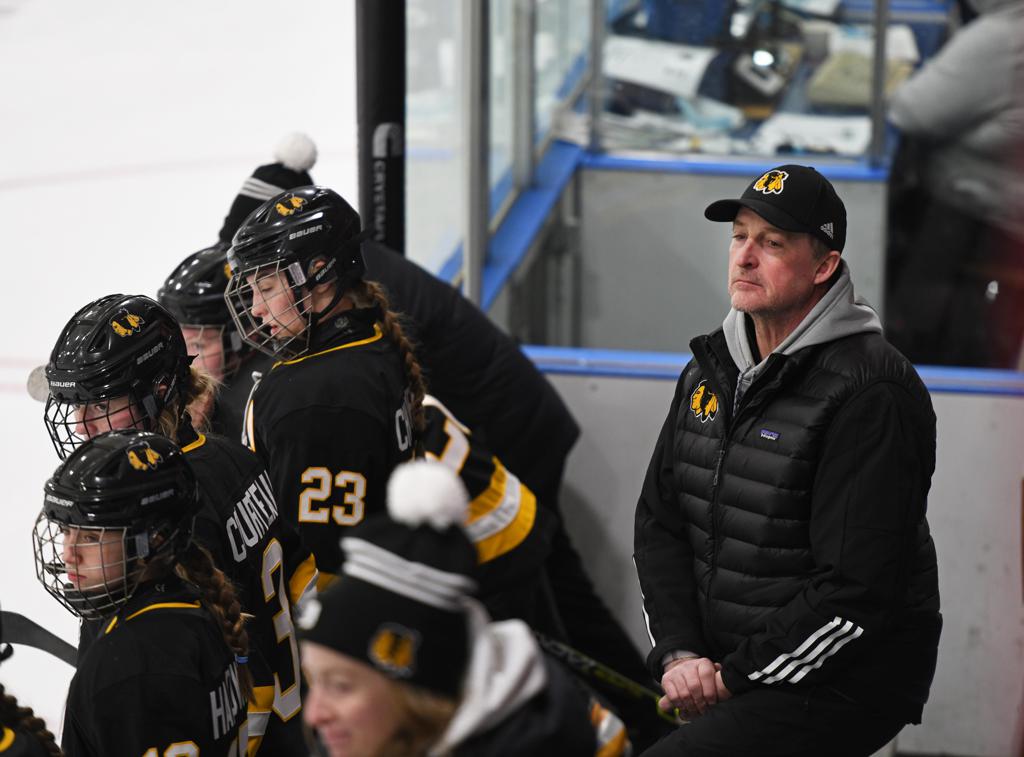 The Warroad jerseys inside rival Roseau’s classrooms indicate it. The Max Foundation apparel customized in Concordia (Moorhead) school colors show it. The banners welcoming the Marvin family and their mission of mental wellness to distant Luverne shout it.

“In the Warroad area” was merely a starting point for the Max Foundation.

Three years ago, during the holiday season, Max Calvin Marvin died by suicide at age 19 in his Warroad home. His parents, David and Kallie, along with sisters Layla and Lisa, wielding their prominent Minnesota hockey surname, honor his memory by working to help other young people in crisis.

The Max Foundation’s mission is “to raise funds with the intent to support charitable programs, projects and activities that facilitate mental wellness amongst the youth.” The original mission used to include “in the Warroad area,” but interest shown by surrounding communities and beyond, plus key partnerships, broadened the Max Foundation’s reach.

“Invariably, every time we’re done speaking somewhere, someone will come up to us as we’re taking our time leaving and say how much it meant to them because this is a problem in their family,” said David Marvin, coach of the Warroad girls’ hockey team. “Maybe this will give a younger athlete the courage to say, ‘I’ve got to figure things out and I need some help.’ ”

The Max Foundation got a boost from across the border when it partnered with Project 11, a program tied to the National Hockey League that promotes mental wellness in Canadian schools. Project 11 was inspired by and created in honor of former NHL player Rick Rypien, who died by suicide at age 27 in 2011, shortly after joining the Winnipeg Jets as a free agent.

The Max Foundation and Project 11 provide a curriculum and access to materials focusing on mental wellness for Warroad Public Schools students from kindergarten to eighth grade. Through weekly lessons and daily activities, students develop a greater understanding and awareness of mental health issues in their own lives and the lives of their peers, and they also learn coping skills.

“It’s another pathway for this learning to spread,” said Chipman, who knew David Marvin because their daughters were college hockey teammates at North Dakota, “and with every intervention, we all win.”

School districts in Roseau, 20 miles west of Warroad on Hwy. 11, and Luverne, more than 400 miles south, reached out and put Project 11 into their curriculums.

Isolation brought by the pandemic has heightened mental health concerns. The U.S. surgeon general released an advisory in early December called “Protecting Youth Mental Health” and indicated that symptoms of depression and anxiety in youths have doubled during the pandemic.

“The need for mental wellness is evident,” said Oftedahl, David Marvin’s brother-in-law. “If it’s not hitting you in the face right now, you don’t have your eyes and your ears open.”

Project 11 began in Luverne schools with the 2021-22 academic year, and results have been positive, Oftedahl said.

“One parent reached out and said, ‘Thank you. I can tell you that it’s helped my child and my family,’ ” Oftedahl said.

The feedback echoes what Warroad Elementary School Principal Brita Comstock has heard since the district implemented Project 11 in the fall of 2019.

“One teacher told me, ‘I have been in education for more than 30 years and seen many programs come and go, but this has been the best social and emotional resource I’ve seen,’ ” Comstock said. “It’s a way for us to try and help people before it’s too late.”

Sharing the Max Foundation message is healing for David Marvin but also triggers his grief.

“The pain is real thick,” Marvin said. “My wife and I and my daughters miss him bad every day. There’s an emptiness. We’re happy to do these events, and hopefully we help someone, but I really think about my son leading up to those events.”

Chipman, who said the closest he got to suicide was knowing of a couple of high school classmates who took their own lives, admires the Marvins for facing their tragic loss in a public setting.

“The courage it’s taken the Marvin family, to advocate as strong as they have, it’s not easy,” Chipman said. “I don’t know how they are able to do it.”

Positive feedback helps keep the Marvins moving forward. So does community support. An October fundraising duel with Roseau brought in $24,501.77. On a visit that month to Concordia (Moorhead), the Marvins supplied players with Max Foundation hoodies and stocking hats in Cobbers maroon and gold.

When it comes to mental health, Marvin said, there is only one team.

“My wife had a friend call her last spring and said that her son recognized some problems with his friend, and she credited the Max Foundation and Project 11,” Marvin said. “We’re being told we’re doing great things, as all these foundations are. There’s been a lot of progress.”