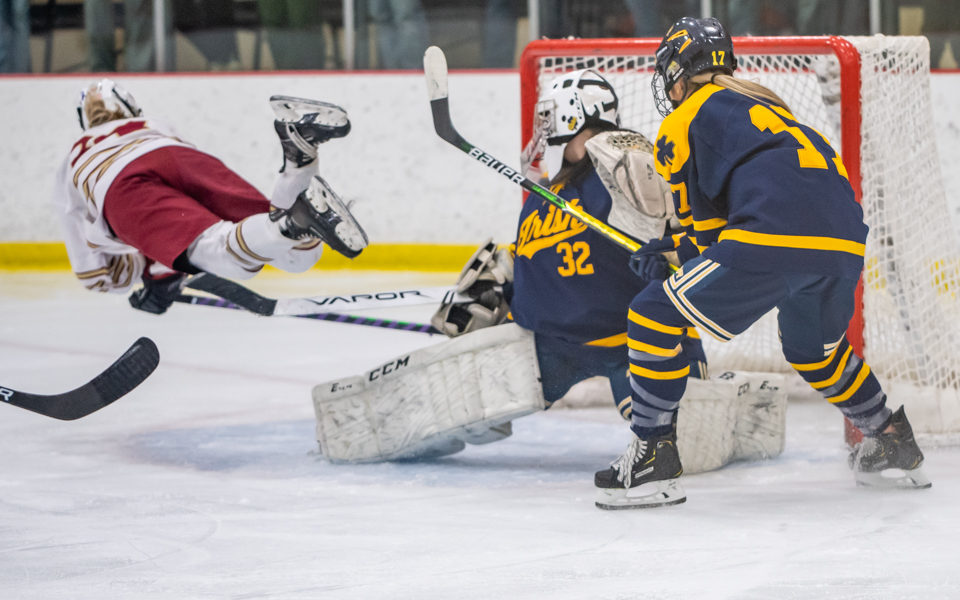 The Cougars’ Claire Enright scores her second goal of the game while getting tripped.. Enright had a hat trick Saturday afternoon in the Cougar’s 3-0 win over the Irish. Photo by Earl J. Ebensteiner, SportsEngine 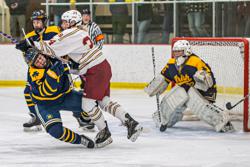 With 35 goals in 18 games so far this season, Lakeville South senior forward Claire Enright has had a season to remember so far.

Though she and her team have had a lot of success, Enright has had to deal with some disappointment. Enright was selected to play for Team USA at the Under-18 Women’s World Championship. Unfortunately, the tournament was canceled due to COVID-19 concerns.

So far, Enright has made lemonade out of the lemon of a situation. She’s been the team’s top scorer and added to that tally on Saturday as she netted a hat trick in the Cougars’ 3-0 win against Rosemount.

In October, USA Hockey announced its Under-18 women’s team set to play in the world championship in January. That included Enright, who was one of seven Minnesota high school players selected to the team. They were set to play in the tournament from Jan. 8-15 in Sweden.

On Christmas Eve, however, the players received the news that the tournament had been canceled due to COVID-19.

“It was a really emotional time for me,” Enright said. “I worked so hard to get there. It was really heartbreaking. I was glad to have my support team here."

While Enright was disappointed with the tournament cancelation, it meant that she could continue to play with Lakeville South, which is currently ranked No. 4 in the latest Class 2A coaches’ poll.

For her teammates and coaches, this was welcome news. She has been the team’s top scorer all season and has helped her team to a 17-1 overall record and perfect 12-0 conference record.

“Her work ethic is what does it,” Lakeville South coach Tim Morris said. “She’s a flawless skater. There are very few skaters who can keep up with her anywhere on the ice.”

Enright’s presence was clear in Saturday’s game against the No. 6-2A Irish. She buried a shot just seven seconds into her team’s second power play to make it 1-0 in the first period.

Enright, a future Wisconsin Badger, had to work for her second goal. Falling down, she still managed to get a shot off and beat Rosemount goaltender Laney Burton. She completed the hat trick with an empty-net goal with less than a second left in the game.

A hat trick is nothing new for Enright. It’s her sixth time this season.

“I think my effort toward my speed in skating has been the big key,” Enright said. “I just try to skate as fast as I can around the other girls and get to the net.”

“We’re playing well defensively,” Morris said. “The kids know a lot of our offense comes from transitional turnovers. When we get those turnovers, we get those kids in open ice and become a really good scoring threat.”

At 12-0 in conference, Lakeville South is two games ahead in the race for the South Suburban Conference championship. The win against third-place Rosemount helps the Cougars’ chances in accomplishing their goal of winning the South Suburban crown.

“Winning the conference is one of our biggest goals because we haven’t done it in past years,” Enright said. “We take a lot of pride in being undefeated in the conference.” 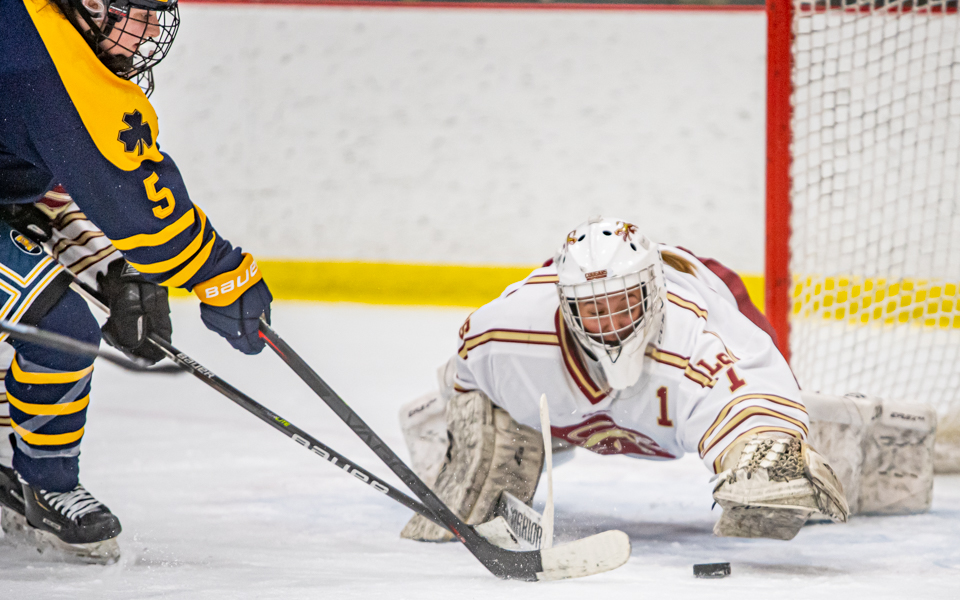 Goaltender Claire Bronson of Lakeville South got the win and the shutout. Bronson stopped 35 shots on goal as the Cougar’s defeated the Irish 3-0 at the Lakeville Hasse Arena. Photo by Earl J. Ebensteiner, SportsEngine

Lakeville South senior forward Claire Enright tallied her team-leading 33rd, 34th and 35th goals of the season on Saturday. Those three goals were all the Cougars needed as they won 3-0 against Rosemount at Hasse Arena.

Enright’s first goal of the game came late in the first period on the power play as she fired a shot past Rosemount goaltender Laney Burton.

In the second period, Enright did it again to make it 2-0 for Lakeville South (17-1, 12-0). This one came as she was falling down in the crease. Her third came with less than a second left in the third period on an empty net to complete the hat trick.

The Cougars, ranked No. 4 in Class 2A in the latest coaches’ association poll, held firm defensively despite some heavy pressure from the No.6-2A Irish. Rosemount senior forward Whitney Tuttle nearly had a goal in the second period, but it was eventually waived off by the referees.

Outside of Tuttle’s near score, Lakeville South goaltender Claire Bronson picked up the shutout by stopping 35 shots. Burton finished with 18 saves. 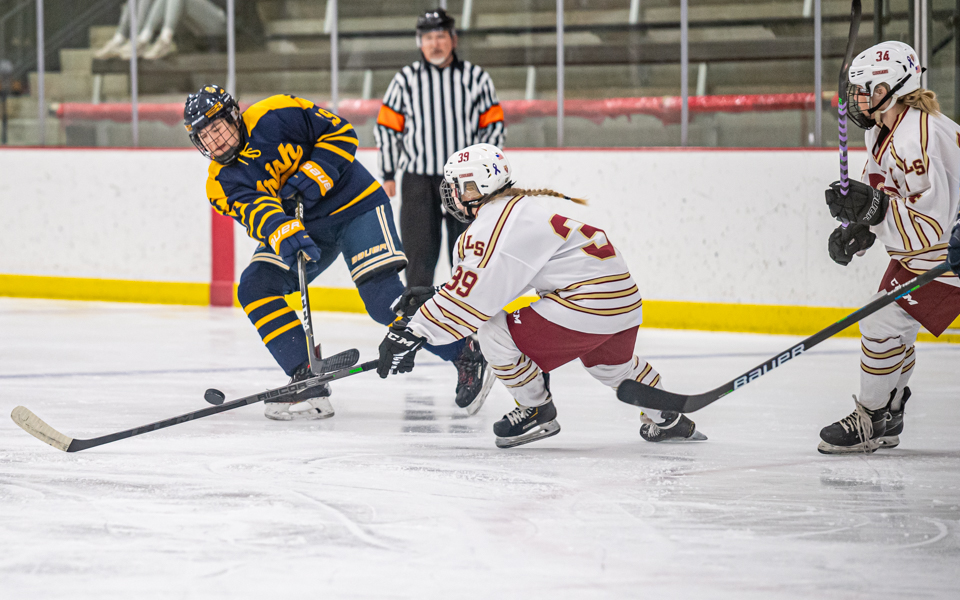