The Cougars tied the game late in the third period, but the Crimson had the game winner quickly as overtime began. 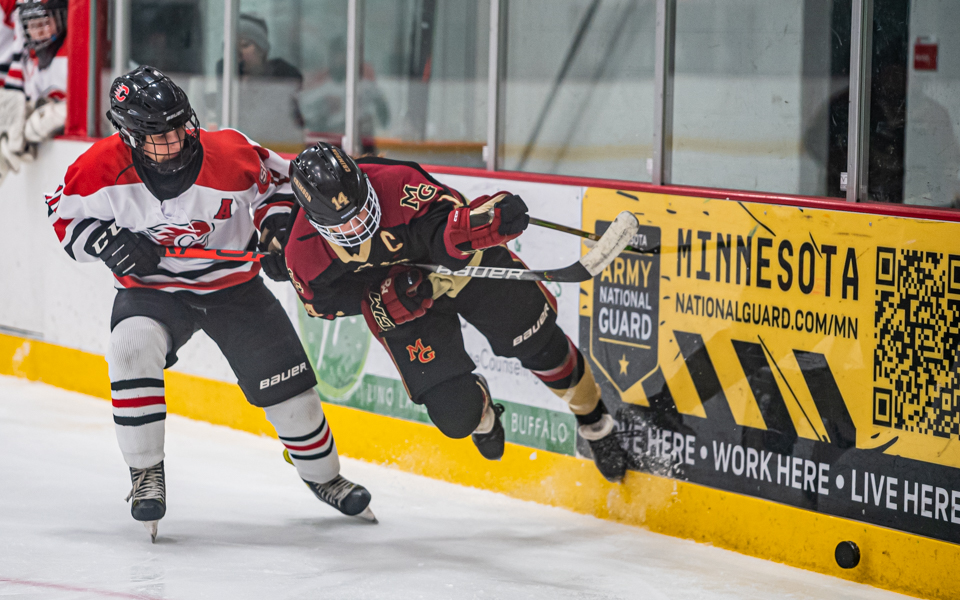 Maple Grove’s Tia Rice battles for the puck with Centennial’s Katie Booth in the third period. Rice scored the goal in overtime giving the Crimson the 2-1 win over the Cougars. Photo by Earl J. Ebensteiner, SportsEngine

So far this season, Maple Grove has played in a pair of overtime games and are 2-0. The reason for that success appears to be one player—senior forward Tia Rice.

Rice has scored the game-winner in both of the Crimson’s overtime wins this season. The latest came on Tuesday as she scored 31 seconds into overtime to push Maple Grove past Centennial/Spring Lake Park, 2-1.

Heading into the game against the Cougars, Rice was third on the team with 20 points (9 goals, 11 assists). Five of those goals proved to be game-winning goals for Maple Grove, ranked No. 7 in the Jan. 12 Class 2A coaches’ poll.

Besides just being an impact scorer, she is also considered to be one of the team leaders. 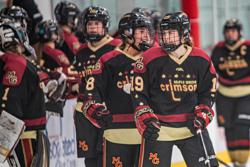 “Tia’s leadership for us has been fantastic,” Maple Grove coach Jim Koltes said. “She’s not one of the biggest kids, she plays huge.”

Though Rice’s goal became the headline of this game, goals were hard to come by. Neither team scored in the game’s first two periods and continued into the third period. Both goalies faced plenty of tough shots as the teams combined for 53 shots on net.

While Maple Grove (12-5-2, 7-1) struggled to beat Centennial sophomore goaltender Kaitlin Groess, the Crimson got some help from their own goalie—sophomore Dani Strom. Though she is a younger player and in her first varsity season as a starter, Strom has kept things stable in net. That included Tuesday when she stopped 20 of 21 shots faced.

“You don’t really think of her as a sophomore,” Koltes said. “It’s become old hat to her. She was locked in tonight.”

The scoreless deadlock finally came to an end six minutes into the period. Maple Grove’s Kelsey Olson deflected a shot right into the net to put the Crimson ahead 1-0.

With just minutes remaining in the third period, the Cougars (12-7-1, 5-3-1) began their push to tie things up. As Groess stood in between her net and the bench ready to go off for the extra attacker, Centennial’s Ella O’Hearn finished off a furious attack by scoring to make it 1-1.

With the momentum shifting toward the Cougars, Maple Grove was ready to get back out right away.

“We drew up a play to score off the draw so we could show the kids we wanted to win it now and not just try and finish out regulation,” Koltes said. “We knew this was going to be tough and a playoff-like atmosphere.”

For the Crimson players, it was a familiar feeling. They had a similar situation against Rogers on Jan. 4 when the Royals scored with 11 seconds remaining in regulation to tie the game.

“We had been in that situation before and knew what it was like,” Rice said. “It was important we believed in ourselves and trust each other.”

The Crimson were unsuccessful in their attempt to win the game in regulation. But that did not deter Maple Grove from pushing for that all-important second goal. Off the opening faceoff in overtime, the Crimson took control and nearly scored.

After the next faceoff, Rice ended up with an open shot in the slot and converted to give Maple Grove the win.

“In overtime, we wanted to get shots to the net,” Rice said. “You never know if it’s going to go in.”

Tuesday was the first time these two teams had met since last season’s Class 2A, Section 5 final when Centennial won 4-1. These two teams are expected to challenge for the section crown again this year. Maple Grove hopes this win can help them get seeded higher than Centennial so the Crimson will have a home advantage of sorts in a possible postseason meeting.

“We knew that if we won this one, we’d have a chance to be one of the top seeds in our section,” Koltes said. “We hope when we see them next we’re the higher seed so we can be the home team and have the last change and get the matchups we want.” 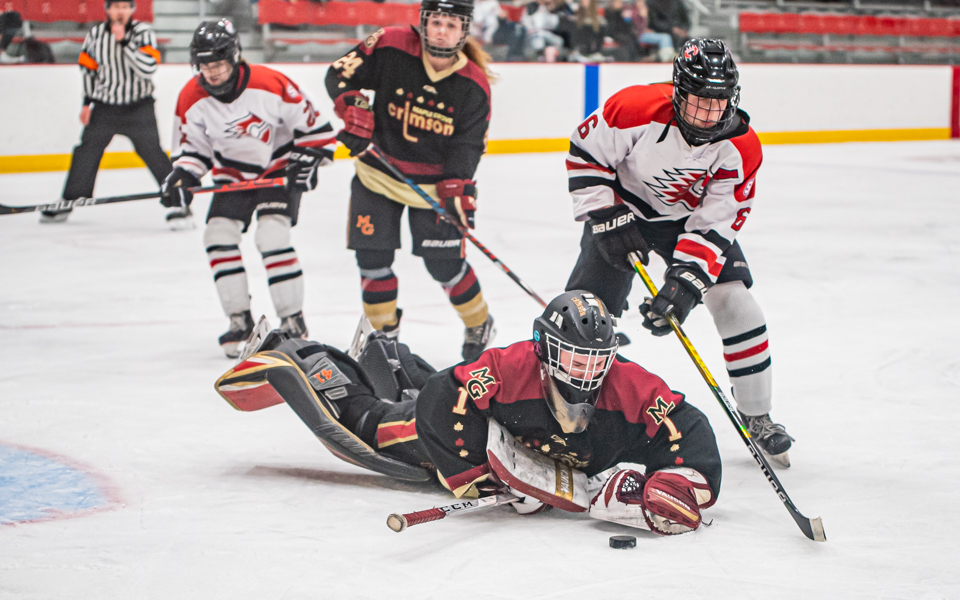 Both Maple Grove (12-5-2, 7-1) and the Cougars struggled to get on the board as the teams were knotted up 0-0 through two periods.

Six minutes into the third period, the Crimson, ranked No. 7 in the latest Class 2A coaches’ poll, broke the scoreless tie. Kelsey Olson deflected in a shot to put her team ahead 1-0.

In the game’s final minutes, Centennial (12-7-1, 5-3-1) began to press as the Cougars looked for the equalizer. It finally came with 1:04 remaining in regulation with Ella O’Hearn snuck a shot past Crimson goalie Dani Strom to tie things up and send the game to overtime.

Maple Grove attacked right from the faceoff in overtime, needing just 31 seconds before Rice fired a shot and give the Crimson the win. 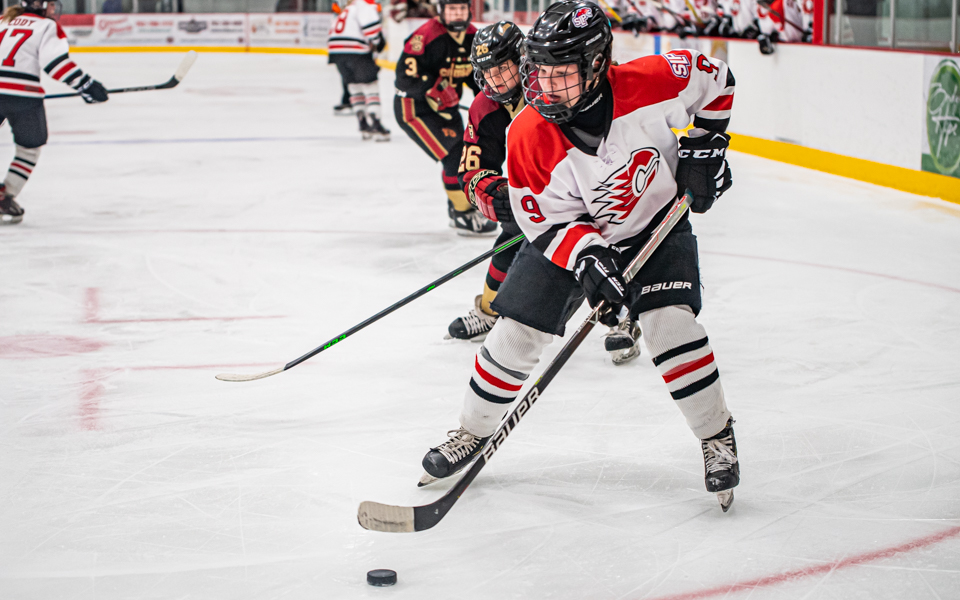 Centennials’ Ella O’Hearn scored the lone-goal Tuesday night in the Cougars' 2-1 loss in overtime to the Crimson. Photo by Earl J. Ebensteiner, SportsEngine