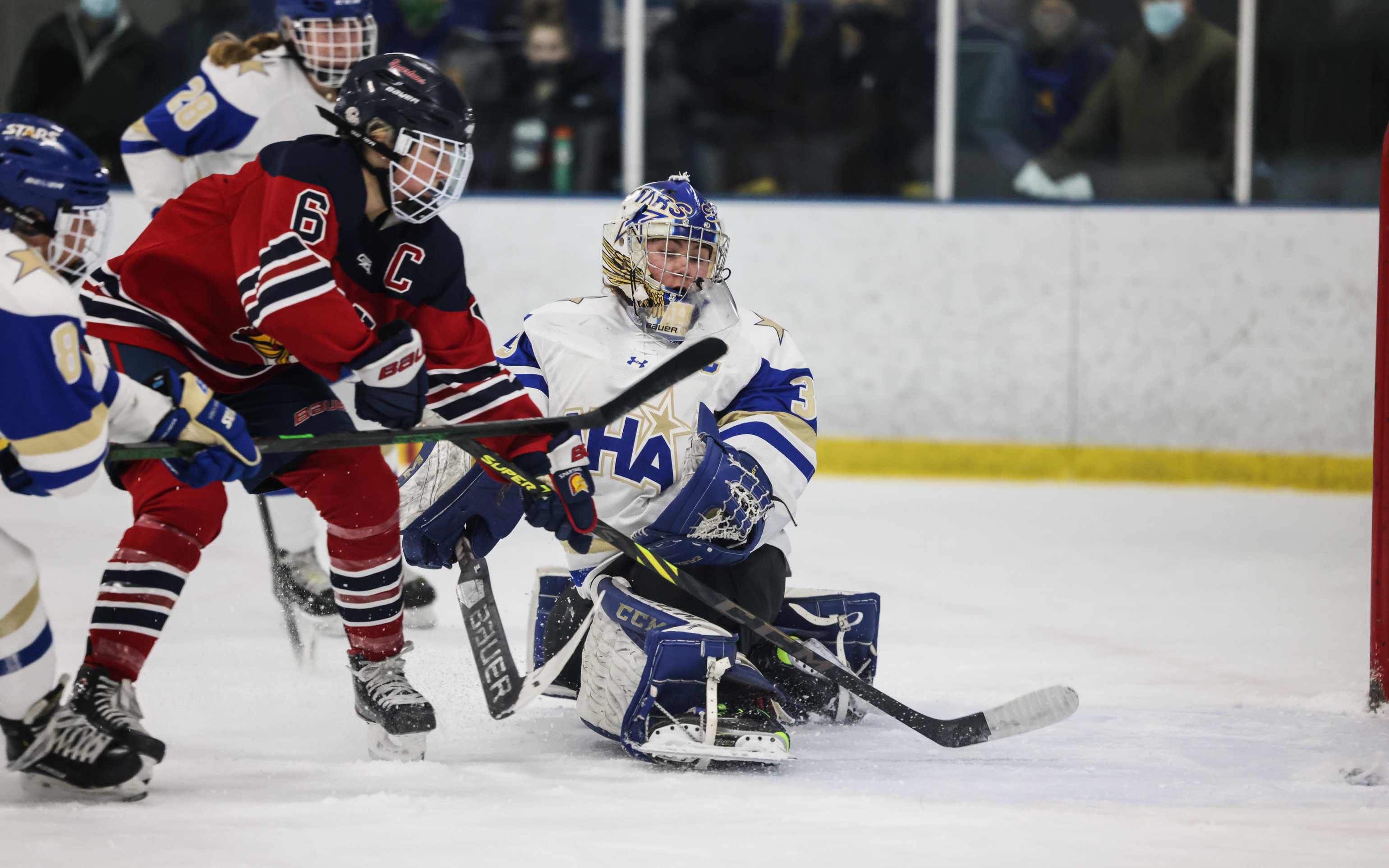 Orono's Iyla Ryskamp tucks the puck around Holy Angels netminder Celeste Rimstad for a first period goal. Ryskamp had a hat trick in the Spartans 6-4 victory over the Stars in Richfield. Photo by Jeff Lawler, SportsEngine

The first goal was a backhand beauty. The second came on the doorstep. The third came on the power play after ringing the crossbar seconds earlier.

So goes the latest chapter of Orono senior captain Iyla Ryskamp hat tricks this season. She scored at least three goals in a game for the fifth time in 2021-22 during a 6-4 victory over Holy Angels on Thursday at Richfield Ice Arena.

“She’s an absolute stud,” Orono coach Sean Fish said. “She should be up for Ms. Hockey at the end of the year, in my opinion. I’m a little bit biased on that. But she deserves it with the year she’s having.” 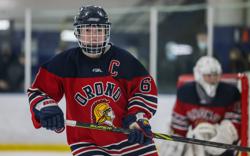 Ryskamp, who leads her team in all three major offensive categories, hit another milestone mark with the hat trick. It pushed her to 30 goals this season and 58 points, each setting new career-high marks for her in a single season. She scored 29 goals and 57 points in 28 games as a sophomore. The Sacred Heart University commit also has 99 career goals and 194 points in 119 games.

She’s scored a point in every game this season except a 4-0 shutout loss to Gentry Academy and has put up 17 points in the past five games. She’s fast, is a 200-foot player, is a second-year captain and does everything you’d want a Division I hockey player to do, Fish said.

“I think it’s less me and more my teammates,” Ryskamp said. “I rotate through a few lines, and they just are so good at knowing where I am. We can read each other’s minds, it feels like.”

Thursday’s victory for Ryskamp and the Spartans (16-2-0), ranked No. 2 in Class 1A in the coaches association poll , pushes their win streak to five games. It came against Metro West Conference foe and No. 5-ranked Holy Angels, a team it already defeated Dec. 2 by a 3-1 score at Orono. It’s a matchup that could turn into a preview of the Class 1A, Section 5 championship game later this season.

“That’s what we even said coming into this game,” said senior Kailey Niccum, who assisted on Ryskamp’s first goal for her 18th helper and 34th point of the season. “We knew we needed to come in with the intensity of a section final game and just absolutely take it from there.”

The Spartans never trailed in the game, though the first period looked like it would remain scoreless in the intermission. That is, before Ryskamp drove to the net with the puck, got the goaltender to commit, then slid the puck smoothly into the net on the backhand with 41 seconds left in the first period.

Orono freshman Macy Rasmussen gave her team a 2-0 lead with a goal during a 4-on-4 situation early in the second period.

Holy Angels (15-4-1) got a pair of goals from freshman Taylor Lesnar to cut the deficits to 2-1 and 3-2, but the Spartans scored a trio of goals in about a four-minute span to increase the lead. The Stars took a timeout down 6-2, then scored 35 seconds later and added another with under five minutes to play.

When the Stars scored, Orono responded well. Ryskamp netted her second of the game only one minute, 24 seconds after a Stars' goal.

“’We’ve got to turn it up another notch,’” Fish said he told his team during intermissions. “And then every time that they scored, we had an answer, which is great. You want to see that from your hockey team.”

And when Lesnar scored her second of the game at 1:41 of the third period, Orono regained the two-goal lead about three minutes later on a hustle-play from one of three pairs of sisters on the team. Senior Mia Lopez beat an opponent to the puck in the corner of the offensive zone and quickly fed a waiting Zoe Lopez, a freshman, in front of the net to finish the play.

Playing against Holy Angels, and perhaps for seedings down the road in the section tournament, it was a game where the Spartans were all ready to go during what turned out to be a bit of a back-and-forth game.

The importance of the game and the result against their opponent isn’t lost on the Spartans, which have sights set on a first-ever state tournament appearance.

“We have such a fire under us that we want to make it to state for the first time,” Ryskamp said. “And our goal is to win state, and I do think we can do that.” 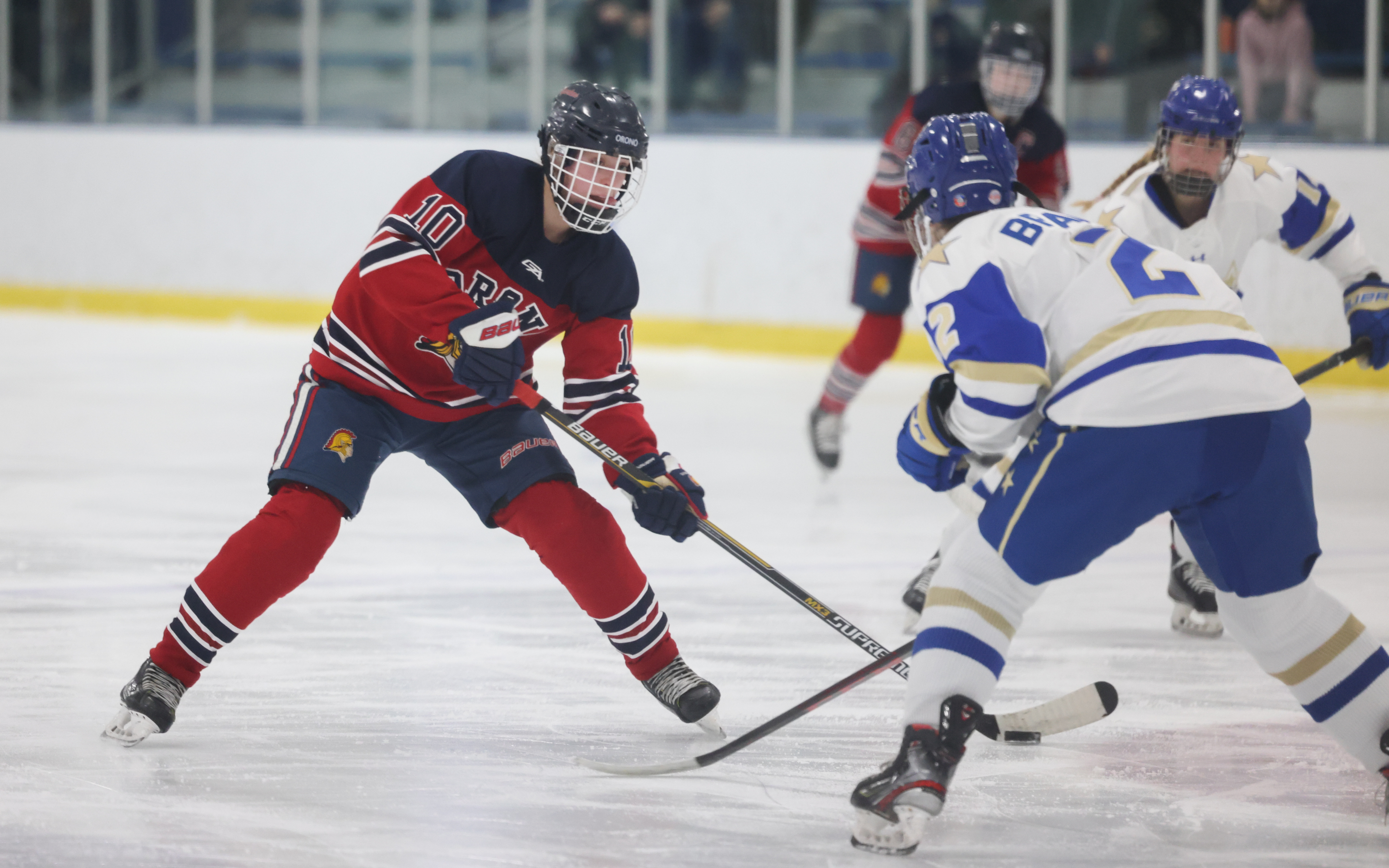 Orono’s Zoe Lopez looks for a shooting lane against Holy Angels Thursday night. Lopez had a goal and an assist in the Spartans' 6-4 victory over the Stars. Photo by Jeff Lawler, SportsEngine

Iyla Ryskamp scored a hat trick for Orono, giving the senior Sacred Heart University commit 30 goals for the season and 99 in her career. It’s the fifth time this season she’s scored three-or-more goals in a game.

Orono took 1-0 and 3-1 leads into the locker room, also getting a goal in the second period from freshman Macy Rasmussen. Holy Angels got a pair of goals from freshman Taylor Lesnar to get within one twice, but the Spartans scored a trio of goals in about a four-minute span to increase the lead before the Stars pumped in two more goals.

Orono has outscored opponents 27-9 during the five-game winning streak. 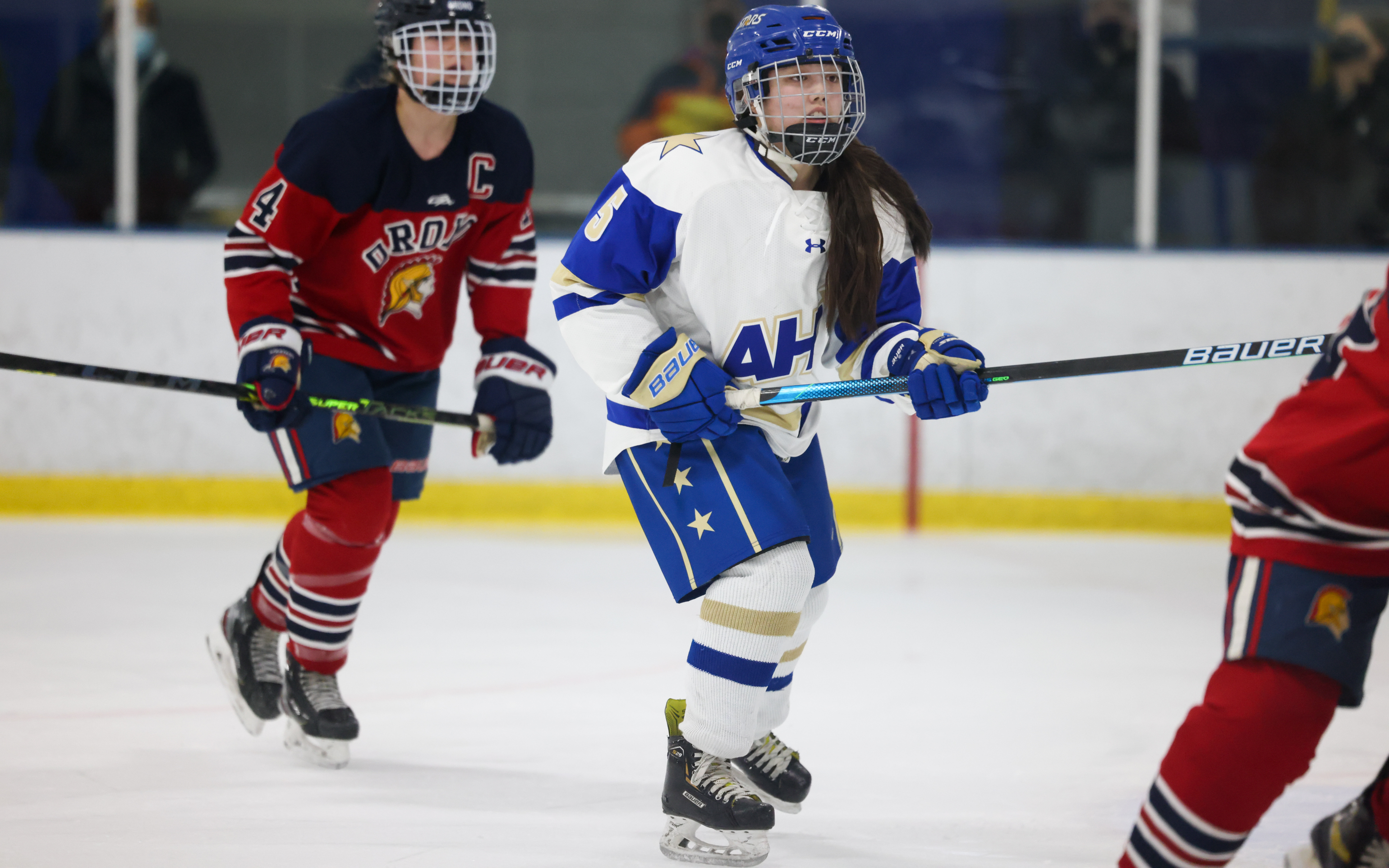